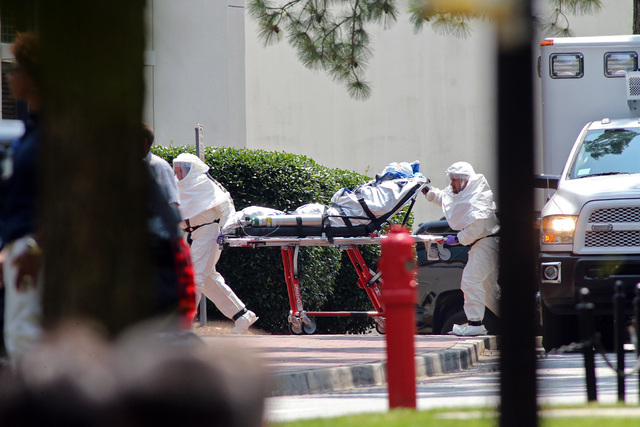 Nancy Writebol, an American aid worker from North Carolina who was infected with the Ebola virus while working in Liberia, arrives at Emory University Hospital in Atlanta, Tuesday, Aug. 5, 2014. Writebol is expected to be admitted to the hospital, where she will join another U.S. aid worker, Dr. Kent Brantly, in a special isolation unit. (AP Photo/(AP Photo/The Journal & Constitution, John Spink) 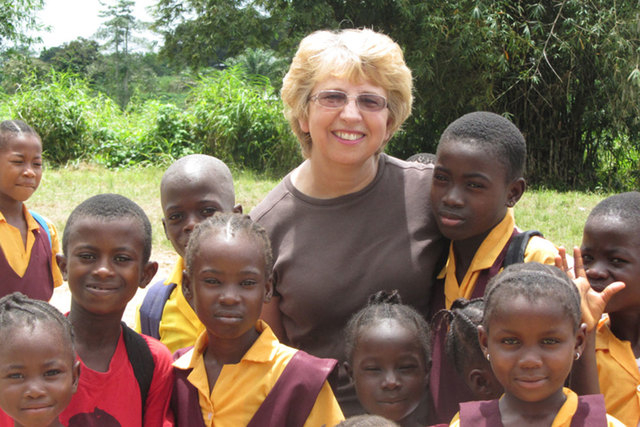 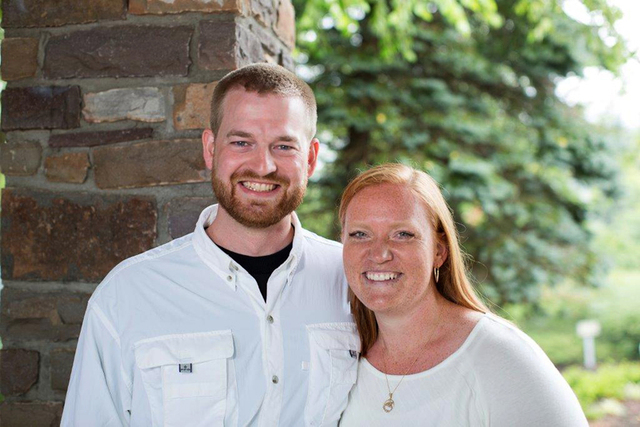 Dr. Kent Brantly and his wife, Amber, are seen in an undated photo provided by Samaritan's Purse. Brantly became the first person infected with Ebola to be brought to the United States from Africa, arriving at at Emory University Hospital, in Atlanta on Saturday, Aug. 2, 2014. (AP Photo/Samaritan's Purse) 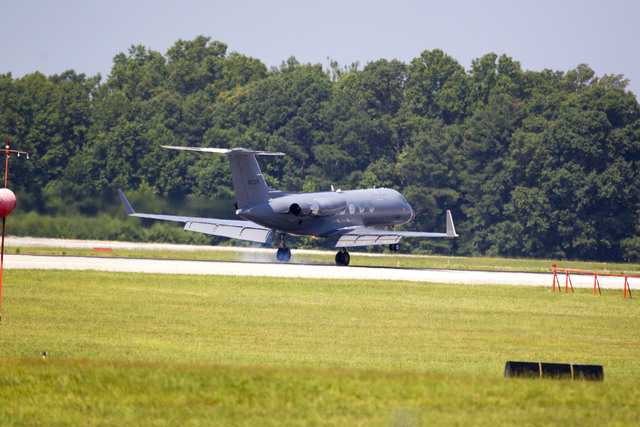 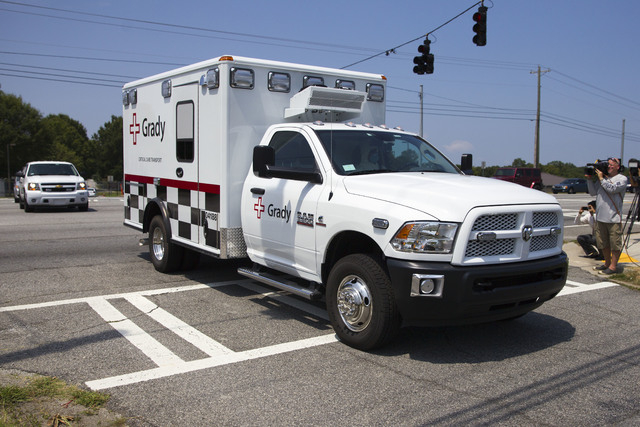 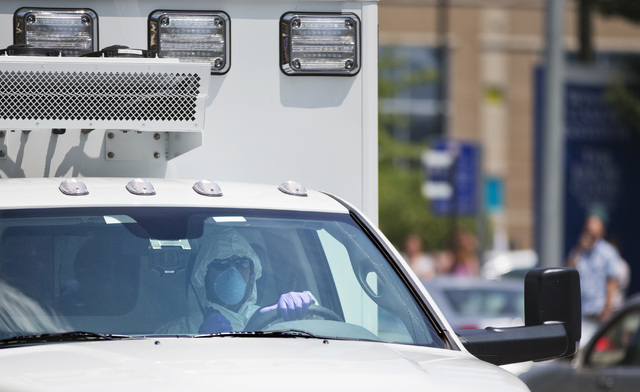 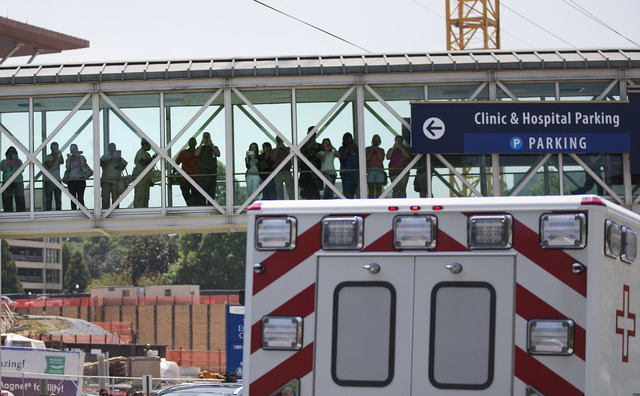 People watch from a bridge as an ambulance transporting Nancy Writebol, an American missionary stricken with Ebola, arrives at Emory University Hospital, Tuesday, Aug. 5, 2014, in Atlanta. Writebol is expected to be admitted to Emory on Tuesday, where she will join another U.S. aid worker, Dr. Kent Brantly, in a special isolation unit. (AP Photo/David Goldman)

ATLANTA — An American aid worker infected with Ebola arrived Tuesday in Atlanta, joining a second patient being given an experimental treatment that has never before been tested on humans.

Nancy Writebol, 59, traveled from Monrovia, Liberia, to Emory University Hospital, just downhill from the U.S. Centers for Disease Control and Prevention. She arrived two days after Kent Brantly, a doctor with whom she had worked in Liberia and who also contracted Ebola, showed up for treatment.

The differences were stark in how they went from the ambulance to Emory, which has a highly specialized isolation unit. While Brantly, 33, was able to walk with assistance into the hospital, Writebol — covered from head to toe in a protective suit — was wheeled in on a stretcher.

Still, the 59-year-old Writebol was described as weak but showing signs of improvement.

“A week ago we were thinking about making funeral arrangements for Nancy,” her husband, David Writebol, said in a statement read by the president of SIM USA, the aid group with which she was working in Liberia. “Now we have a real reason to be hopeful.”

Brantly and Writebol were both infected despite taking precautions as they treated Ebola patients in West Africa, where the virus has been spreading faster than governments can contain it, killing nearly 900 people so far.

The treatment, called ZMapp, was developed with U.S. military funding by a San Diego company, using antibodies harvested from lab animals that had been injected with parts of the Ebola virus. Tobacco plants in Kentucky are being used to make the treatment.

It’s impossible to know whether the drug saved these workers, CDC Director Tom Frieden emphasized. “Every medicine has risks and benefits,” he said to reporters at a health symposium in Kentucky. “Until we do a study, we don’t know if it helps, if it hurts, or if it doesn’t make any difference.”

If the treatment works, it could create pressure to speed through testing and production to help contain the disease in Africa.

There is no vaccine or specific treatment for Ebola, but several are under development, including ZMapp, made by Mapp Biopharmaceutical Inc. It works by boosting the immune system’s efforts to fight the virus. The U.S. Defense Threat Reduction Agency announced last month that it is providing more funding to speed the drug’s development.

Brantly and Writebol were working at a missionary clinic outside Liberia’s capital. David Writebol remains in Liberia, where he said his wife’s care was extraordinary.

“It’s not like having a nurse come in every hour to fluff up your pillow,” he said in his statement. “It’s more like going into a nuclear reactor. The suits are clumsy, hot and uncomfortable. But it was like watching the love of Christ take place right before your eyes.”

David Writebol said in his statement that she was able to stand up and, with assistance, to get on the plane in Liberia. Before the flight, she ate some yogurt, he said.

Ebola is spread by close contact with blood and other bodily fluids, and Writebol’s duties included disinfecting doctors and nurses entering or leaving the Ebola treatment area.

Writebol and Brantly will be sealed off from anyone who isn’t wearing protective gear. Dr. Bruce Ribner, who will treat them, said their families can speak with them through a plate-glass window. On Tuesday, Amber Brantly said in a statement that she has been able to see her husband every day.