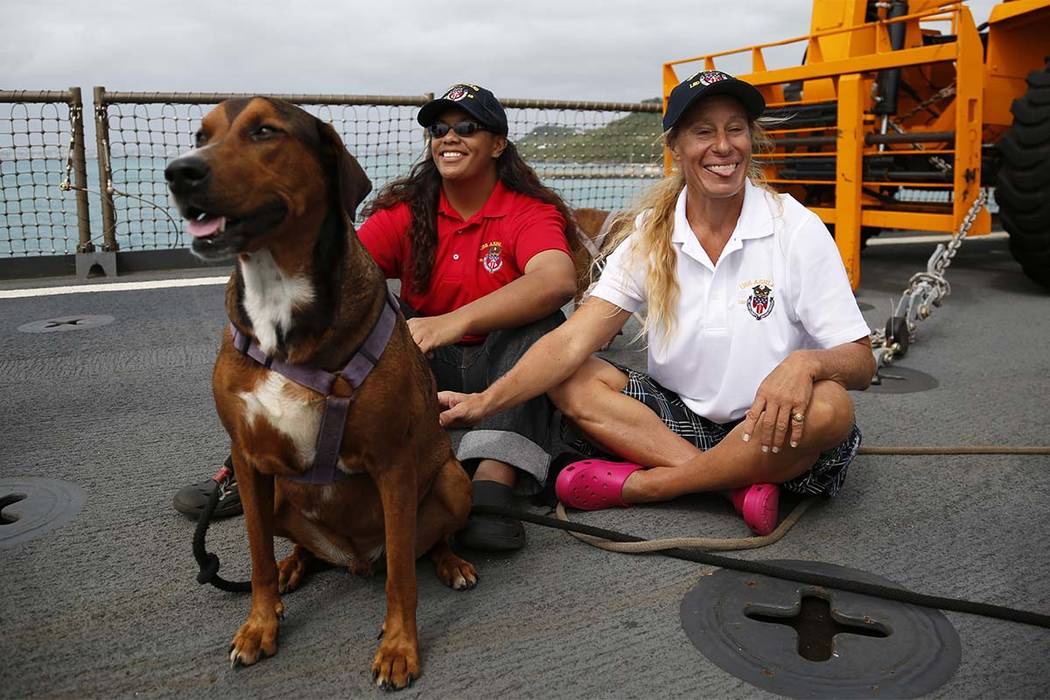 Jennifer Appel, right, and Tasha Fuiava sit with their dogs on the deck of the USS Ashland Monday, Oct. 30, 2017, at White Beach Naval Facility in Okinawa, Japan. The U.S. Navy ship arrived at the American Navy base, five days after it picked up the women and their two dogs from their storm-damaged sailboat, 900 miles southeast of Japan. (AP Photo/Koji Ueda) 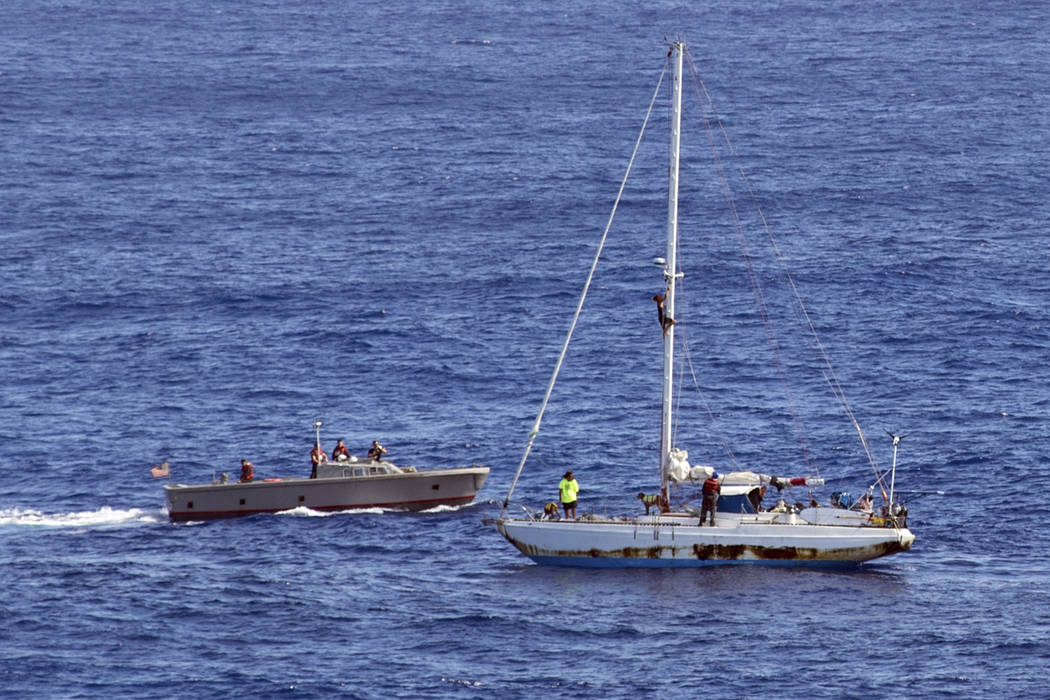 In this Wednesday, Oct. 25, 2017 photo, sailors from the USS Ashland approach a sailboat with two Honolulu women and their dogs aboard as they are rescued after being lost at sea for several months while trying to sail from Hawaii to Tahiti. The U.S. Navy rescued the women on Wednesday after a Taiwanese fishing vessel spotted them about 900 miles southeast of Japan on Tuesday and alerted the U.S. Coast Guard. The women, identified by the Navy as Jennifer Appel and Tasha Fuiava, lost their engine in bad weather in late May, but believed they could still reach Tahiti. (Mass Communication Specialist 3rd Class Jonathan Clay/U.S. Navy via AP) 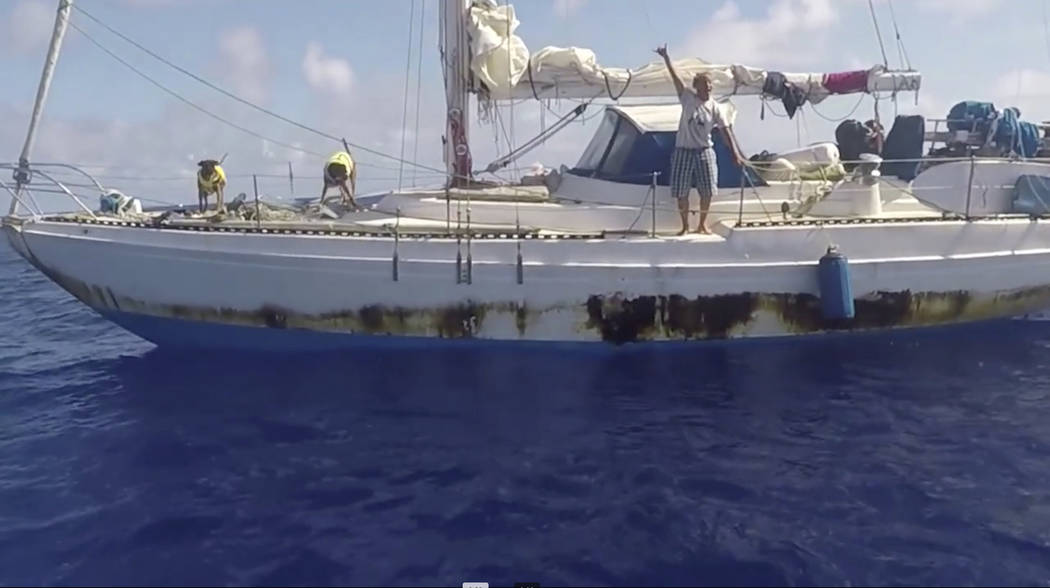 In this Wednesday, Oct. 25, 2017 still image taken from video provided by the U.S. Navy, Jennifer Appel, of Honolulu, holds up a shaka sign as rescuers approach her crippled sailboat, the Sea Nymph, after being lost at sea for months, about 900 miles southeast of Japan. Their engine was crippled, their mast was damaged and things went downhill from there for two women who set out to sail the 2,700 miles from Hawaii to Tahiti. A Taiwanese fishing vessel spotted their boat off Japan and thousands of miles in the wrong direction from Tahiti. The Navy sent the USS Ashland to their rescue. (U.S. Navy via AP) 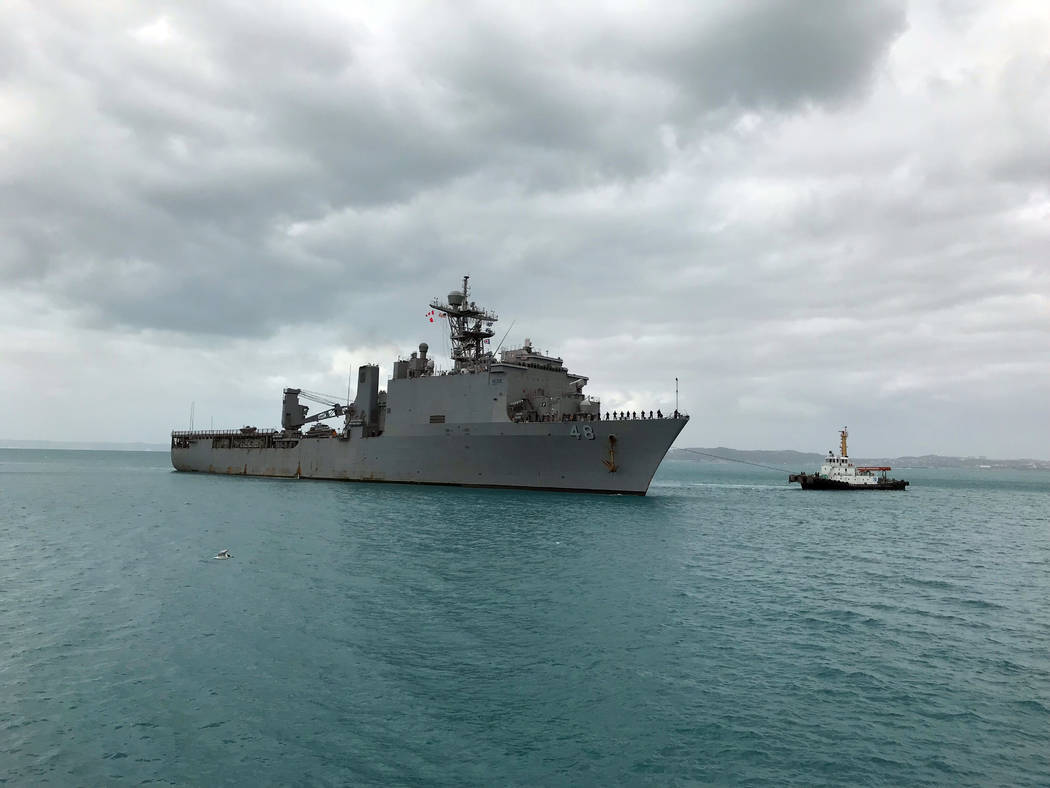 USS Ashland, carrying two women who were rescued after months at sea on their storm-damaged sailboat, arrives at White Beach Naval Facility in Okinawa, Japan Monday, Oct. 30, 2017. The U.S. Navy ship arrived at the American Navy base, five days after it picked up the women and their two dogs from their storm-damaged sailboat, 900 miles southeast of Japan. (AP Photo/Ken Moritsugu)

HONOLULU — The U.S. Coast Guard said Monday that two Hawaii women who were lost at sea for five months had an emergency beacon aboard their sailboat that was never activated.

U.S. Coast Guard spokesman Lt. Scott Carr told The Associated Press that their review of the incident and subsequent interviews with the survivors revealed that they had the Emergency Position Indicating Radio Beacon (EPIRB) aboard but never turned it on.

When asked if the two had the radio beacon aboard, the women told the AP on Friday they had a number of other communications devices, but they didn’t mention the EPIRB.

The device communicates with satellites and sends locations to authorities. It’s activated when it’s submerged in water or turned on manually.

During the post-incident debriefing by the Coast Guard, Jennifer Appel, who was on the sailboat with Tasha Fuiava, was asked if she had the emergency beacon on board. Appel replied she did, and that it was properly registered.

“We asked why during this course of time did they not activate the EPIRB. She had stated they never felt like they were truly in distress, like in a 24-hour period they were going to die,” said Coast Guard spokeswoman Petty Officer 2nd Class Tara Molle, who was on the call to the AP with Carr.

Carr also said the Coast Guard made radio contact with a vessel that identified itself as the Sea Nymph in June near Tahiti, and the captain said they were not in distress and expected to make land the next morning. That was after the women reportedly lost their engines and sustained damage to their rigging and mast.

Experts say some of the details of the women’s story do not add up.

A retired Coast Guard officer who was responsible for search and rescue operations said that if the women used the emergency beacon, they would have been found.

“If the thing was operational and it was turned on, a signal should have been received very, very quickly that this vessel was in distress,” Phillip R. Johnson said Monday in a telephone interview from Washington state.

Emergency Position Indication Radio Beacons, or EPIRBS, activate when they are submerged in water or turned on manually and send a location to rescuers within minutes.

The beacons are solid and built to be suddenly dropped in the ocean. “Failures are really rare,” Johnson said, but added that old and weak batteries also could cause a unit not to work.

It’s not clear if the pair had tested it before the journey.

The women also said they had six forms of communication that all went dead. “There’s something wrong there,” Johnson said.

He knows of cases in remote Alaska where a ship in distress just using one form of beacon brought a fairly quick response from nearby fishing boats and the Coast Guard.

“I’ve never heard of all that stuff going out at the same time,” he said.