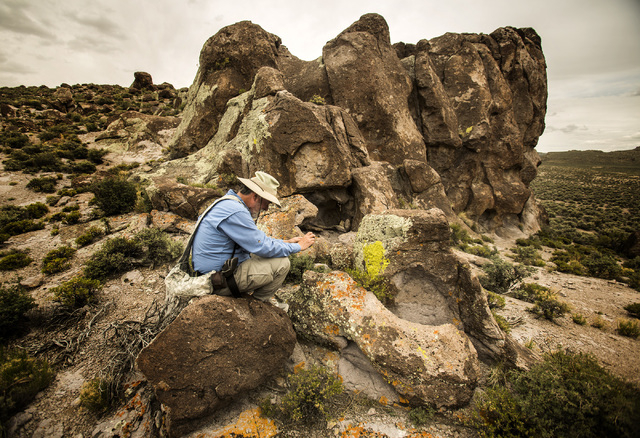 Naturalist and outdoorsman Jim Boone photographs a rock formation in Garden Valley, which is a three-hour drive north of Las Vegas, on Wednesday, May 20, 2015. Over 800,000 acres in central Nevada is proposed as the Basin and Range National Monument. (Jeff Scheid/Las Vegas Review-Journal) Follow Jeff Scheid on Twitter @jlscheid 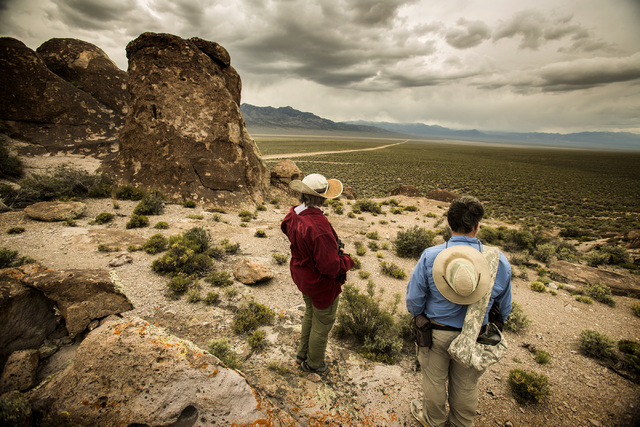 Naturalist and outdoorsman Jim Boone, right, and his wife, Liz, view Garden Valley, which is about a three-hour drive north of Las Vegas, on Wednesday, May 20, 2015. Over 800,000 acres in central Nevada is proposed as the Basin and Range National Monument. (Jeff Scheid/Las Vegas Review-Journal) Follow Jeff Scheid on Twitter @jlscheid

WASHINGTON — The House voted Wednesday to block President Barack Obama from proclaiming national monument conservation areas in western states. But the vote will not prevent him from acting soon to set aside a major area in rural Nevada.

Obama is close to designating the Basin and Range National Monument on 704,000 acres in Nye and Lincoln counties, with multiple sources saying the announcement likely will be Friday.

Conservationists said it is possible the president could designate new protected areas in other states at the same time he creates the latest one in Nevada, where an act of Congress last year set aside 22,650 acres for the Tule Springs Fossil Beds National Monument in Clark County.

In the newest action, the sweeping desert floors of Garden and Coal valleys separated by the Golden Gate Range would become the largest area set aside by Obama using authority under the 1906 Antiquities Act to preserve objects “of historic or scientific interest.”

The area has been long prized by conservationists and championed by Sen Harry Reid, D-Nev., as containing unspoiled landscape, habitat for sensitive animal and plant species and Native American artifacts and petroglyphs.

A draft of the presidential proclamation that leaked in May described the area as “one of the largest ecologically intact landscapes in the Great Basin region.”

At the same time, supporters say withdrawing the region from most economic uses could boost eco-tourism and provide a scenic buffer to “City,” a massive earthen sculpture being formed near Hiko by artist Michael Heizer.

But a number of officials locally and Republicans in Washington say there is no consensus in Nevada over restricting land uses in the region, and they have bristled at Obama acting unilaterally to do so.

The House voted 222-206 on Wednesday for an amendment by Rep. Cresent Hardy, R-Nev., to forbid federal money from being spent on presidential proclamations creating monuments in counties in California, Wyoming, Utah, Oregon, New Mexico, Arizona and Colorado as well as Nevada.

The Hardy provision was attached as a rider onto an appropriations bill for the Department of the Interior and the Environmental Protection Agency. Besides Hardy, Reps. Joe Heck and Mark Amodei, both R-Nev., voted for it. Rep. Dina Titus, D-Nev., voted against it.

The bill is a long way from becoming law. It still must pass a test in the Senate, and survive into the final bill that might not be formed until later this year.

The outcome of appropriations bills is further complicated because Democratic and Republican senators are engaged in a larger dispute over federal spending levels this year.

By then, Basin and Range National Monument likely will be a done deal, conceded Hardy, whose district contains the proposed monument area. While it could have impact elsewhere, the practical effect of the amendment will be “nothing” on the reportedly imminent Nevada plan, Hardy said in an interview Wednesday.

But Hardy added it still will serve as a message that Congress is unhappy with Obama sidestepping lawmakers to block swaths of land from economic uses.

“Here we have bureaucrats continuing to shove things down people’s throats in areas where people don’t even have a chance to address their issues,” Hardy said.

Hardy’s office on Wednesday released a letter from Nye County Commissioner Dan Schinhofen expressing concern that “even more now will be removed from the small amount of PILT (Payment in Lieu of Taxes) funds we receive,” if land is set aside.

During debate earlier this week, Rep. Rob Bishop, R-Utah spoke in favor of the Hardy amendment. He said local residents “need to have the right to have some input in how land decisions are used. Give them the chance to be heard because under the present Antiquities Act, they are not heard.”

Rep. Raul Grijalva, D-Ariz., responded the amendment would “undermine conservation” and undercut an important authority that presidents have exercised for 100 years to set aside valued lands that Congress would unlikely do on its own.