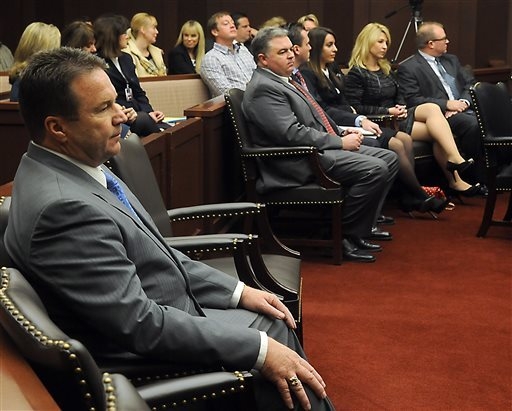 Eddie Lorton, a candidate for Reno mayor, front left, sits in the Nevada Supreme Court Tuesday Jan. 21, 2014 along with Dwight Dortch, in gray suit and red tie, and Jessica Sferrazza, second right, who also want to run for mayor. The slate of potential candidates for Reno mayor was in the hands of the Nevada Supreme Court to decide whether current or former City Council members who are barred from re-election by term limits are eligible to run for mayor. (AP Photo/The Reno Gazette-Journal, Marilyn Newton)

CARSON CITY — The Nevada Supreme Court said Thursday that term limits provisions in state law mean that members of the Reno City Council who have already served 12 years under the restrictions cannot run for mayor.

The ruling could very well have an impact in Henderson where Mayor Andy Hafen has served on the City Council since 1987, and as mayor since 2009.

The case was brought by George “Eddie” Lorton, who argued that Reno council members who have been in office 12 years cannot run for mayor because term limits prohibit them from serving additional time on the same governing body.

Attorneys for two members of the Reno City Council contemplating bids for mayor argued before the court in January that the office of mayor is distinct from that of a member of the council.

Former Councilwoman Jessica Sferrazza and current Councilman Dwight Dortch were both considering a run for mayor.

But in a split decision, the court sided with Lorton.

“Thus, based on the provisions of the Reno City Charter, we conclude that the Reno mayor is a member of the ‘local governing body,’ subject to the same limitations that apply to the other city council members,” the court majority said. “Accordingly, because Sferrazza and Dortch each will have served on the Reno city council for 12 years by the end of the current term, they are ineligible to be elected as Reno’s mayor.”

Lorton has indicated he also wants to run for mayor. He sought a ruling from the court to keep both Sferrazza and Dortch off the 2014 ballot.

Hardesty was joined by four other members of the court in the majority opinion.

Justices Nancy Saitta and Ron Parraguirre dissented, arguing that the Reno City Council is made up of two separate elective offices: the major and the City Council members.

“Quite significantly, the mayor alone is charged with protecting the public peace and suppressing riots,” the dissent said in part. “These duties are among those that set the mayor apart from the six city council members, establishing the office of mayor as a separate and distinct office.”

Henderson spokesman Bud Cranor said the city is still reading the opinion, but the language appears clear for candidates filing in the future.

“This applies to candidates going forward,” Cranor said. “It’s pretty explicit in the ruling that it provides direction for candidates and the courts moving forward. So, obviously, it has implications for the mayor and other elected officials around Nevada regarding their future involvement in politics, and specifically local governing bodies.”

Hafen was re-elected in April 2013 in the primary after receiving more than 50 percent of the vote, eliminating the need for a runoff election.

“I think people throughout the state are disappointed by the ruling today,” Hafen said in a statement. “I was as surprised by the decision as everyone else, but I can’t let that deter me from doing the work I was elected to do. I love Henderson, and I love the people here and I’ll continue to do my absolute best to serve them during the remainder of my term as mayor.

Asked about the effect of the ruling on other cities around the state, he said: “It is potentially destabilizing to a number of municipalities throughout the state.”

Republican political consultant Sig Rogich, who spearheaded the term limits effort in Nevada in the 1990s, said he disagreed with the ruling.

“I don’t think that was the intent of the law,” he said. “I thought the mayor was a separate entity.”

As to the applicability of the ruling to Henderson, Rogich said it will be up to someone with legal standing within the city to decide whether to try to apply it to Hafen.

Lorton’s attorney Stephanie R. Rice agreed that someone with legal standing in Henderson would have to challenge Hafen’s qualifications as mayor to apply the ruling prior to the 2017 election.

However, “legislation, unless it explicitly states it is applicable retroactively, usually isn’t,” Rice said.

Eric Herzik, political science professor at the University of Nevada, Reno, said the ramifications are significant both for Reno and Henderson.

In Reno, “it completely reshapes how that race is going to unfold,” he said. “More interesting is how it will affect the mayor of Henderson. He is illegal if you apply this ruling.”

The ruling could impact Boulder City’s 2015 mayoral race. Mayor Roger Tobler is in his second term ending next year after serving on the City Council from 2003 to 2007.

“I’ll do whatever’s legal,” said Tobler, who had not yet read the ruling when reached Thursday. “If they ruled that it’s 12 years, I won’t be running again.”

Voters approved term limits in Nevada for most state and local offices in 1996.