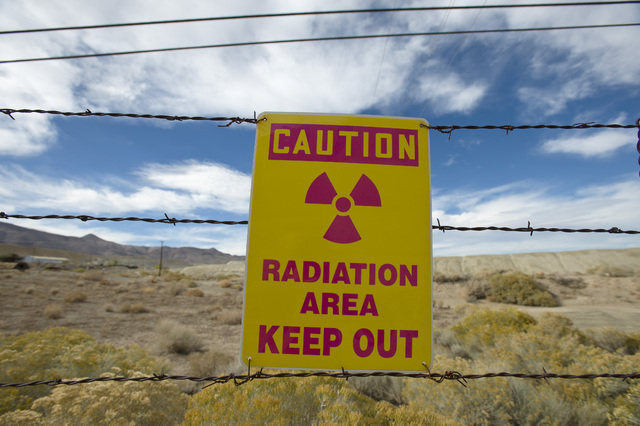 A sign gives a warning at the former Anaconda copper mine site near Yerington. After decades of state and mine officials claiming that radiation and arsenic contamination in the local wells occurred naturally, scientists have mapped out a definitive uranium plume drifting from the mine site in the local groundwater. (AP Photo/Scott Sady) 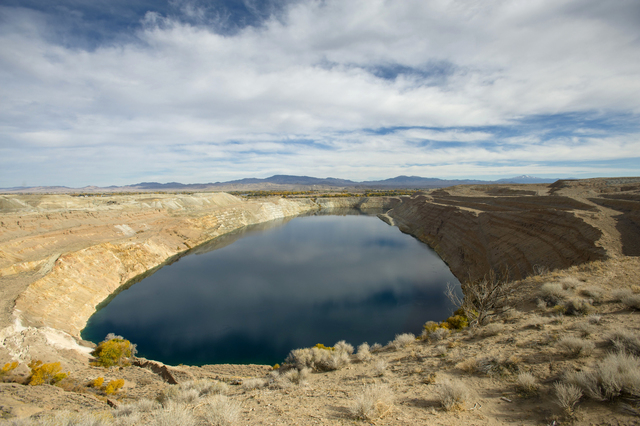 A water-filled mine pit at the former Anaconda copper mine site near Yerington tested as high as 100 times above the legal drinking water standard for uranium or arsenic or both. (AP Photo/Scott Sady, file) 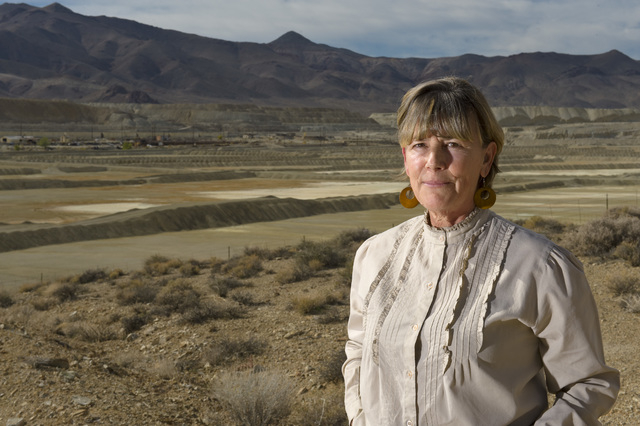 Peggy Pauley, who formed Yerington’s first citizen advocacy group to address the water contamination from the former Anaconda copper mine site near Yerington, says the lawsuit was not about getting money. Though the companies are not admitting guilt in the matter, Pauley says, “No company pays out $20 million if they don’t believe they have any liability or responsibility.” (AP Photo/Scott Sady) 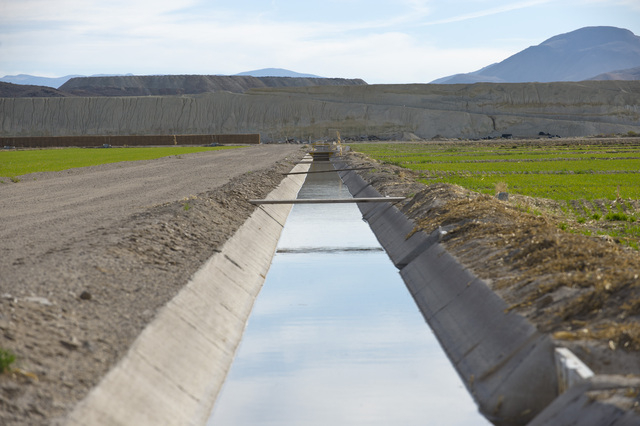 In this photo taken Oct. 26, 2009, irrigation ditches and crop fields are located right in the center of the Uranium plume spreading from the former Anaconda copper mine site near Yearington, Nev. After decades of state and mine officials claiming that radiation and arsenic contamination in the local wells occurred naturally, scientists have mapped out a definitive uranium plume drifting from the mine site in the local groundwater. (AP Photo/Scott Sady) 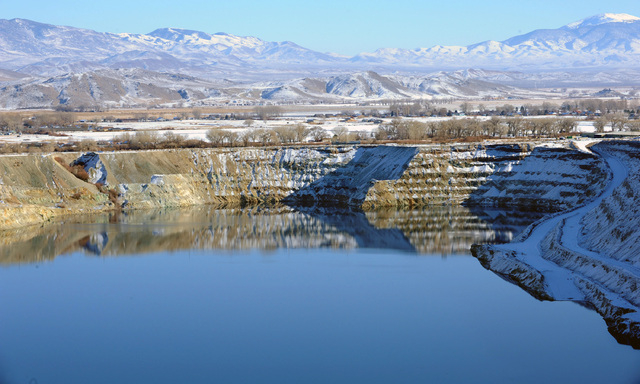 In this April 14, 2009 photo, the old Anaconda mine pit is partially filled with water near Yerington. Rural neighbors of an abandoned World War II-era copper mine that has leaked toxic chemicals in northern Nevada for decades have won up to a $19.5 million settlement from companies they accused of covering up the contamination. (AP Photo/The Reno Gazette-Journal, Marilyn Newton) 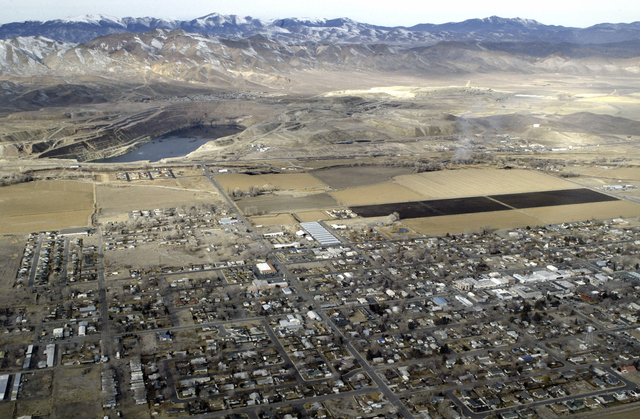 The mine site is adjacent to the small farming town of Yerington. Rural neighbors of an abandoned World War II-era copper mine that has leaked toxic chemicals in northern Nevada for decades have won up to a $19.5 million settlement from companies they accused of covering up the contamination, according to a report. (AP Photo/Cathleen Allison, file) 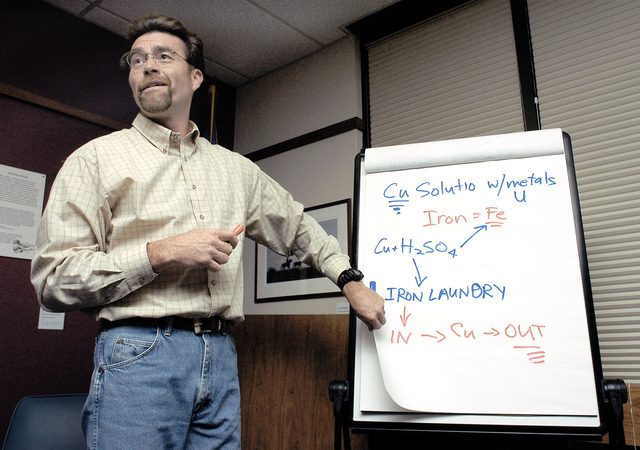 Earle Dixon explains the chemical processes used to extract copper at the former Anaconda mine in Yerington on Dec. 8, 2004. Dixon, who said he was fired by the Bureau of Land Management for refusing to downplay contamination at the mine, spoke to a crowd of concerned residents about possible health risks to the community from the abandoned mine. (AP Photo/Debra Reid)

RENO — Rural neighbors of an abandoned World War II-era copper mine that has leaked toxic chemicals in Northern Nevada for decades have won up to a $19.5 million settlement from companies they accused of covering up the contamination.

Atlantic Richfield Co. and its parent, BP America Inc., acknowledged no wrongdoing under the agreement, which also calls for them to pay $2.6 million in attorney fees to the legal team that represented about 700 past and present neighbors of the Anaconda mine built in 1941 on the edge of Yerington, about 65 miles southeast of Reno.

Residents said in a class action lawsuit filed in 2011 that the companies had “intentionally and negligently” concealed the extent of uranium, arsenic and other pollutants leaking into their drinking water wells from the mine covering six square miles — an area equal to 3,000 football fields.

“We are so pleased,” said Peggy Pauly, 64, whose two-acre home borders the mine. She helped organize families in 2004 after a U.S. government whistle-blower started publicizing studies that had been kept secret documenting health and safety risks posed by a plume of radioactive contamination migrating off the site.

“It was a long ordeal, but it was worth it,” Pauly said Wednesday. “Residents wish we had never had to deal with any of this.”

The companies agreed to pay $7 million in property damages and $900,000 to a medical monitoring fund. The final damages will depend on the cost of extending city water supplies to about 200 residents, estimated between $6.5 million and $12.5 million.

BP America said the settlement is “fair and reasonable.”

“It delivers a good outcome for the community by guaranteeing the availability of a reliable, clean source of drinking water by connecting residents to the city water supply, and furthers the company’s interests toward achieving a final resolution of groundwater concerns in the area without the cost and distraction of further litigation,” the company said in an email Wednesday.

About a dozen families filed the lawsuit in U.S. District Court in Reno nearly a decade after they started pressing concerns with state regulators they said were too cozy with Nevada’s mining industry to enforce a cleanup schedule at the site, which the U.S. Environmental Protection Agency since has assumed control of under its Superfund program.

In 2008, a U.S. Labor Department review panel upheld a whistle-blower claim by ex-mine cleanup supervisor Earle Dixon, who said the U.S. Bureau of Land Management illegally fired him four years earlier for speaking out about the risks in defiance of local politicians who tried to muzzle him.

“This was a small community taking on a big corporation in a mining town over mining pollution — an imposing challenge,” Steven German, co-counsel for the plaintiffs, said in a telephone interview from New York.

Fueled by demand after World War II, Anaconda produced 1.7 billion pounds of copper from 1952 to 1978 at the mine in the Mason Valley, an irrigated agricultural oasis in the area’s otherwise largely barren high desert.

The EPA determined over the years that uranium was produced as a byproduct of processing the copper and that the radioactive waste was initially dumped into dirt-bottomed ponds that — unlike modern lined ponds — leaked into the groundwater.

BP and Atlantic Richfield, which bought Anaconda Copper Co. in 1978, have provided bottled water for free to any residents who wanted it for several years. But they had said uranium naturally occurs in the region’s soil and that there was no proof that a half-century of processing metals there was responsible for the contamination.

Pauly and others started seeking outside legal help after a new wave of EPA testing first reported by the AP in November 2009 found that 79 percent of the wells tested north of the mine had dangerous levels of uranium or arsenic or both that made the water unsafe to drink.

One well a half mile away had uranium levels more than 10 times the legal drinking water standard. At the mine itself, wells tested as high as 100 times the standard. Though health effects of specific levels are not well understood, the EPA reports long-term exposure to high levels of uranium in drinking water may cause cancer and damage kidneys.

Pauly said Wednesday the lawsuit was never about the money.

“The biggest win is that even though BP says they are not admitting any guilt, no company pays out $20 million if they don’t believe they have any liability or responsibility,’’ she said. “For me, to have it end the way it ended is an admission that they know darn well that mine site has harmed us.”