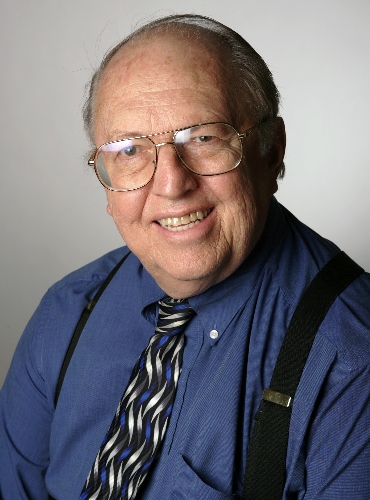 A.D. Hopkins has investigated thugs and hung out with grizzled ranchers. He has exposed corruption and written beautifully about the people who made Nevada what it is.

For that, the veteran journalist was inducted into the Nevada Press Association’s Newspaper Hall of Fame on Saturday. The Hall of Fame honors "newspaper people who have done outstanding work in the field of print journalism," the association says on its nominating form. The association lists 66 previous inductees, including Mark Twain.

"I can’t think of a more worthy recipient for the NPA Hall of Fame," said Sherman Frederick, the Review-Journal’s publisher and also a member of the Hall of Fame. "Besides dedicating his life to the craft of journalism in Las Vegas, his body of work has made a significant contribution to the lives of Nevadans — past, present and future."

Hopkins, 67, currently the special projects editor at the R-J, came to Nevada in 1969. He had worked at papers in his native Virginia and North Carolina, and was looking to come West.

He figured he would be here a few years and move on. He thought the same thing about journalism in general. He wanted to be a novelist.

That never happened. Instead, Hopkins made a reputation for himself, first at the Las Vegas Sun, then at a scrappy paper called the Valley Times.

He was among the first in the state to cover gambling in depth as a serious issue, said Michael Green, a College of Southern Nevada history professor.

Soon, Hopkins was recruited to join the R-J. He was a reporter for a short time, then was chosen to edit the Nevadan, the Sunday magazine then published by the paper.

There, he excelled. The magazine had a particular focus on rural Nevada, the state’s history and its quirky characters.

Mary Hausch, a journalism professor at the University of Nevada, Las Vegas and a former editor at the R-J who had a hand in hiring Hopkins, said he had a particular talent for storytelling and for working with talented writers.

Green, who wrote some freelance articles for the magazine, also noted Hopkins’ ability to tell a good story.

What Hopkins wrote and published, Green said, "were not only good articles but fun articles."

By 1989, Hopkins was tapped to run a special projects team that would seek to figure out what Las Vegas would look like in the year 2000. The project was a smash success, and Hopkins soon found himself overseeing a rotating band of reporters on various special projects.

He and his reporters did every­thing from publishing public employees’ salaries — unheard of in those days — to exposing a link between UNLV’s famous basketball team and an infamous sports fixer in a scandal that went nationwide.

The work never stopped. Scandals and investigations and stories kept coming, and Hopkins kept printing them. He gained a bit of fame for writing about a scandal involving a Northern Nevada judge that ended with the resignations of two state Supreme Court justices.

By the late 1990s, he was brought in to co-edit a history book called "The First 100," a look at the influential people who helped shape Las Vegas. That, too, was a success.

It led to Hopkins’ second stint as the editor of a magazine, this time Cerca, a publication of Stephens Media, the R-J’s corporate owner. That magazine was a critical success but a financial failure, and Hopkins eventually came back to head a new, full-time special projects team at the paper. It’s a job he’s still doing every day.

The team has done pieces on the war on terror and how it’s changed society, the improper sealing of court cases, abuse and neglect in the defense of indigent defendants and construction defects.

Hopkins said he is proud of what he has been able to do in his 40-plus years covering the news here. He still is having fun. He thinks he’s still making a difference.

And though he never became the novelist he thought he would, he has felt like he had the best seat in the house to watch history unfold.

"I never wanted to give up that front-row seat," he said.