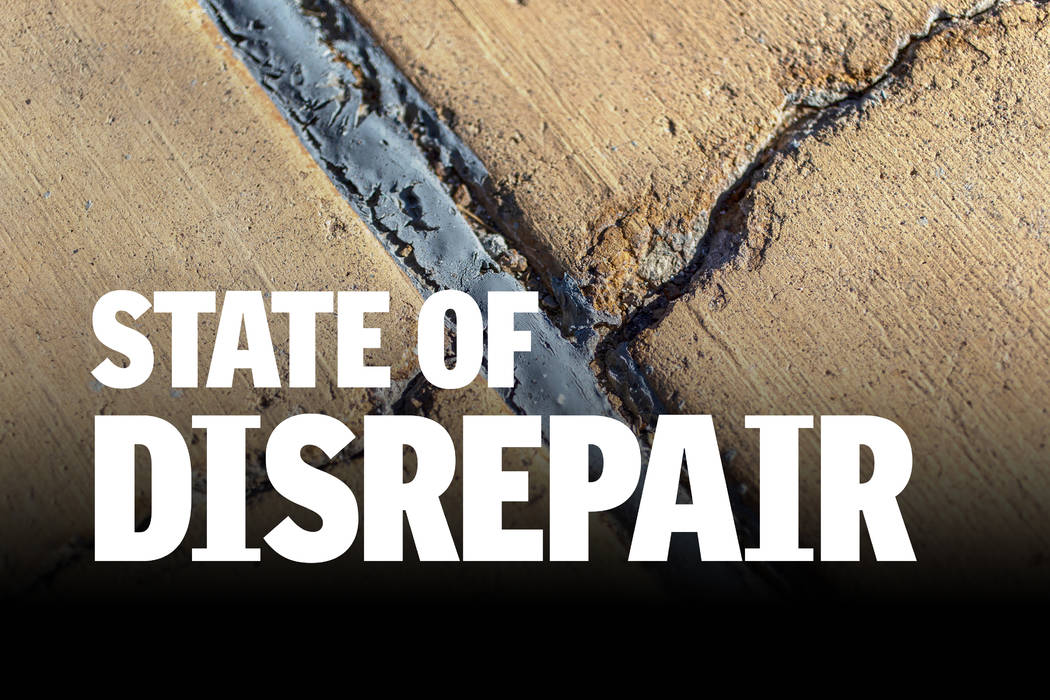 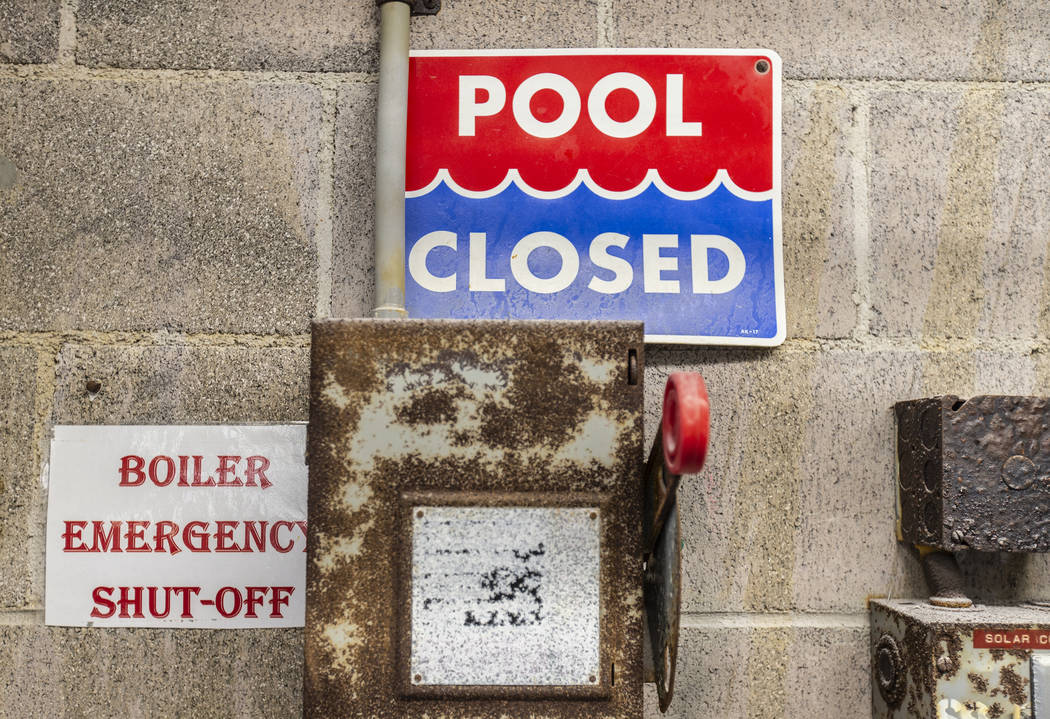 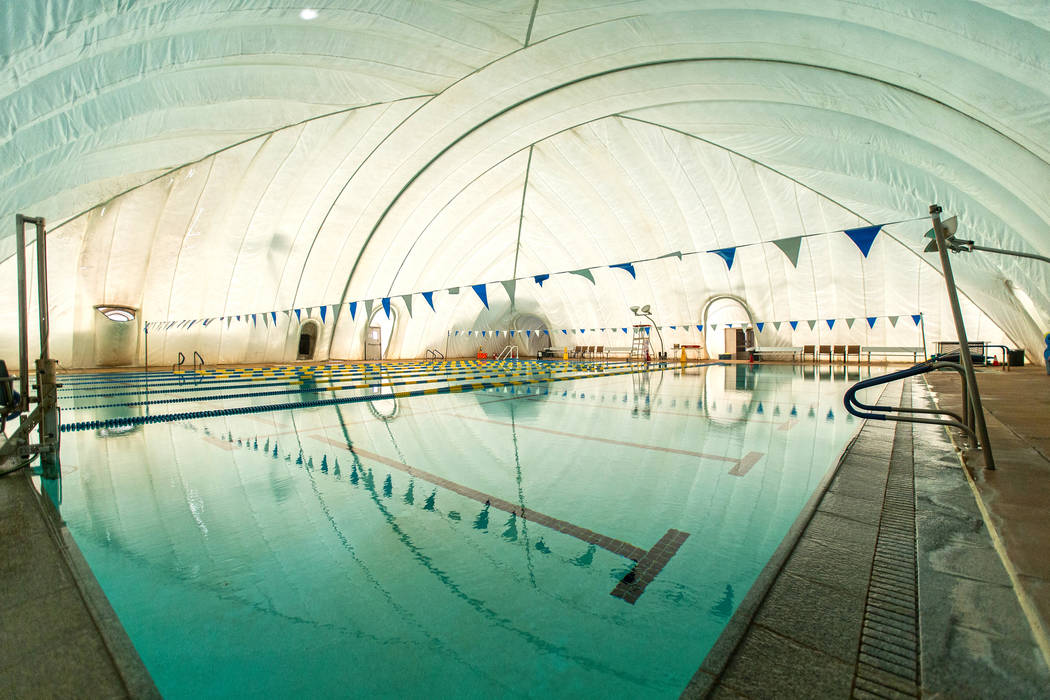 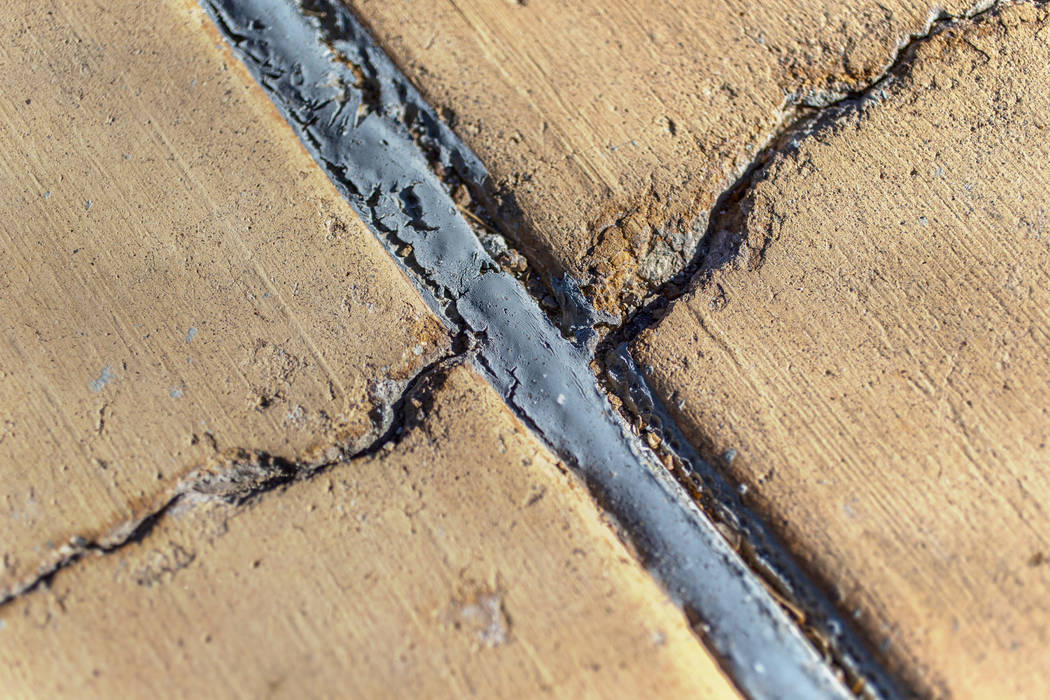 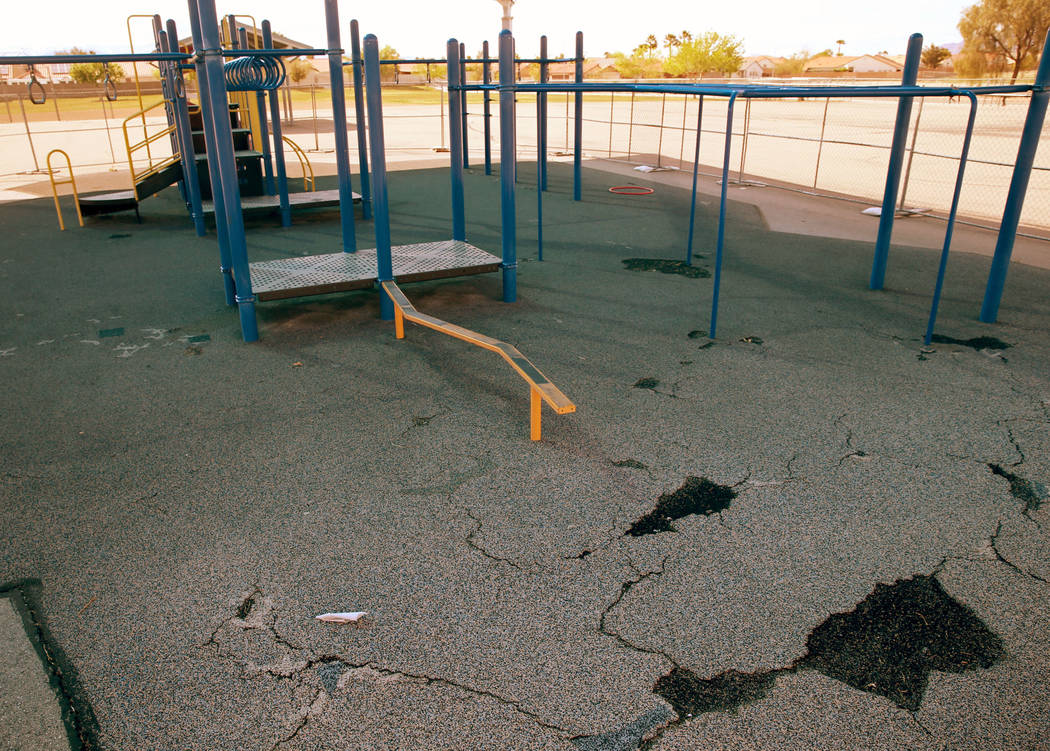 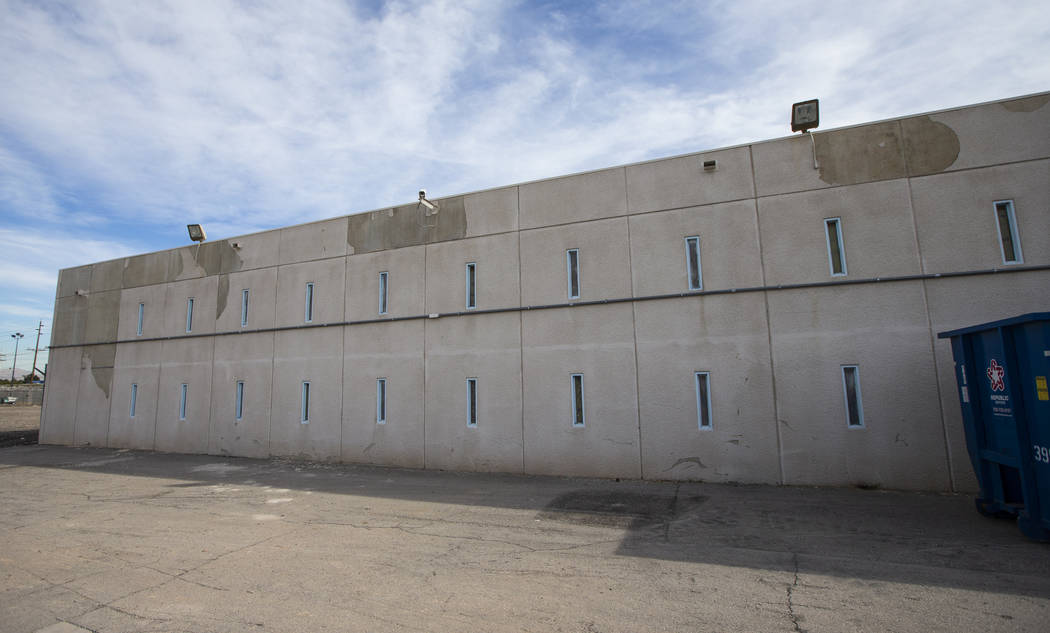 A view of the dorms of the North Las Vegas jail, which was closed in 2012, in North Las Vegas on Thursday, Dec. 12, 2019. The jail is slated to reopen this year. (Chase Stevens/Las Vegas Review-Journal) @csstevensphoto 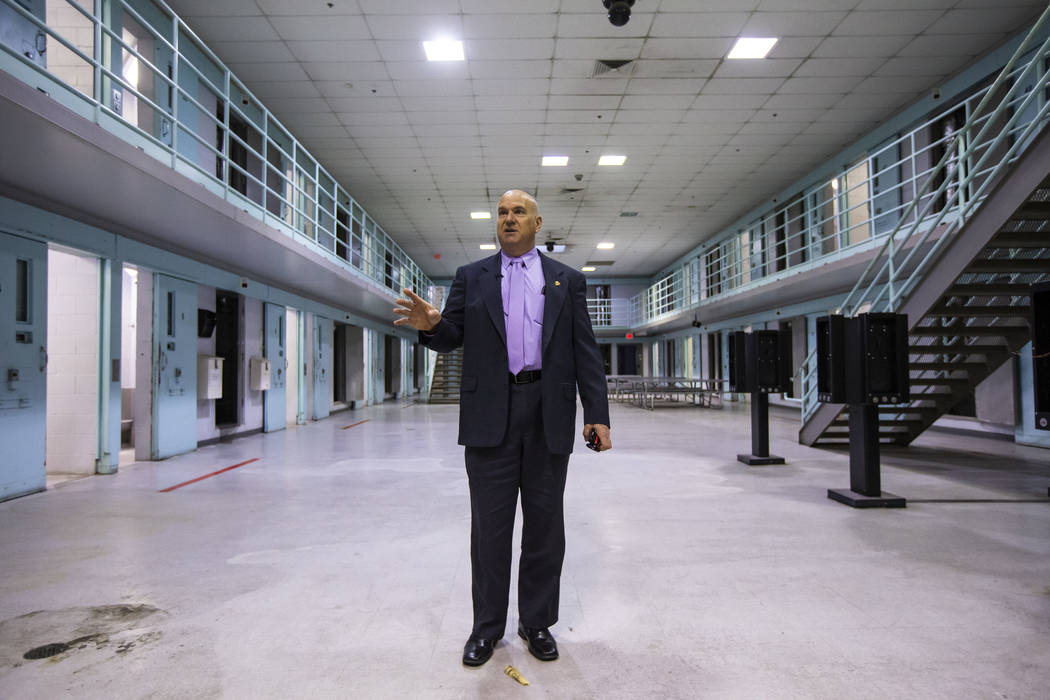 James Dzurenda, a consultant with the City of North Las Vegas, talks about the North Las Vegas jail, which was closed in 2012, while walking through the dorms in North Las Vegas on Thursday, Dec. 12, 2019. The jail is slated to reopen this year. (Chase Stevens/Las Vegas Review-Journal) @csstevensphoto 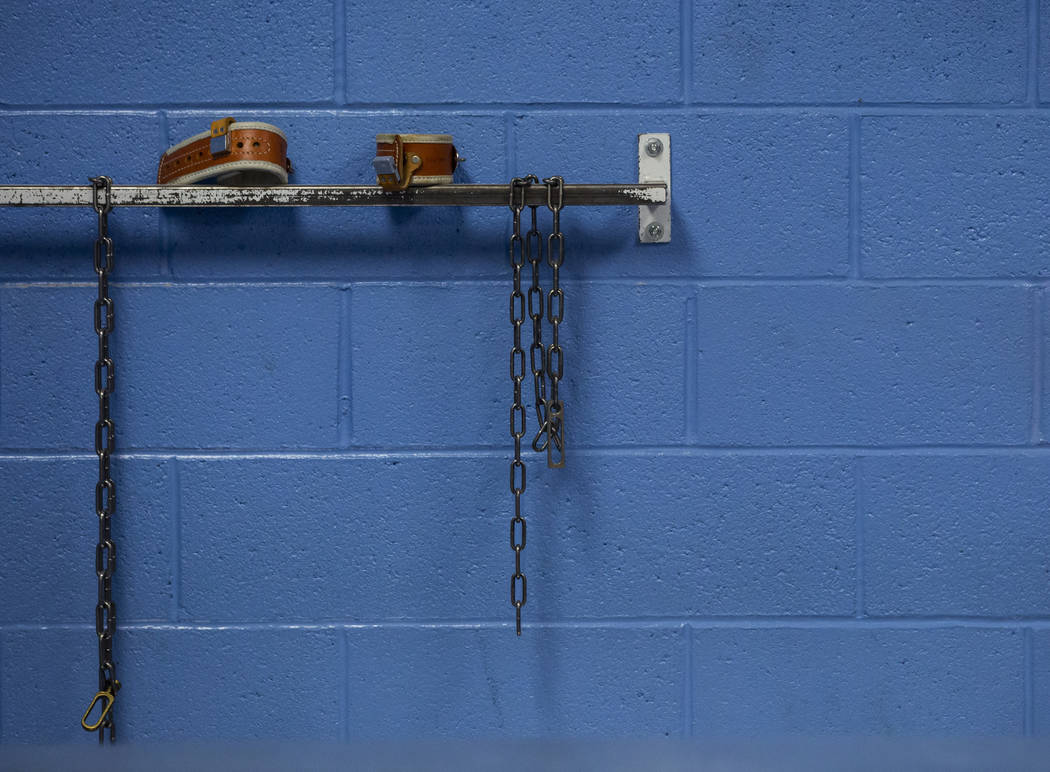 Handcuffs and chains remain in the North Las Vegas jail, which was closed in 2012, in North Las Vegas on Thursday, Dec. 12, 2019. The jail is slated to reopen this year. (Chase Stevens/Las Vegas Review-Journal) @csstevensphoto 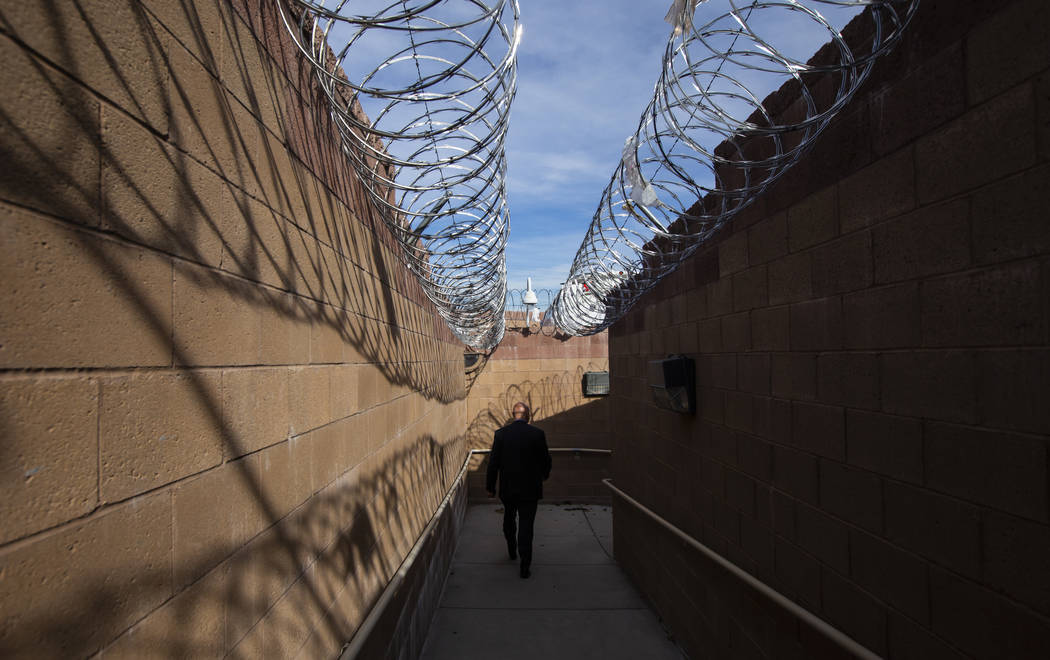 James Dzurenda, a consultant with the City of North Las Vegas, walks through the outdoor areas of the North Las Vegas jail, which was closed in 2012, in North Las Vegas on Thursday, Dec. 12, 2019. The jail is slated to reopen this year. (Chase Stevens/Las Vegas Review-Journal) @csstevensphoto 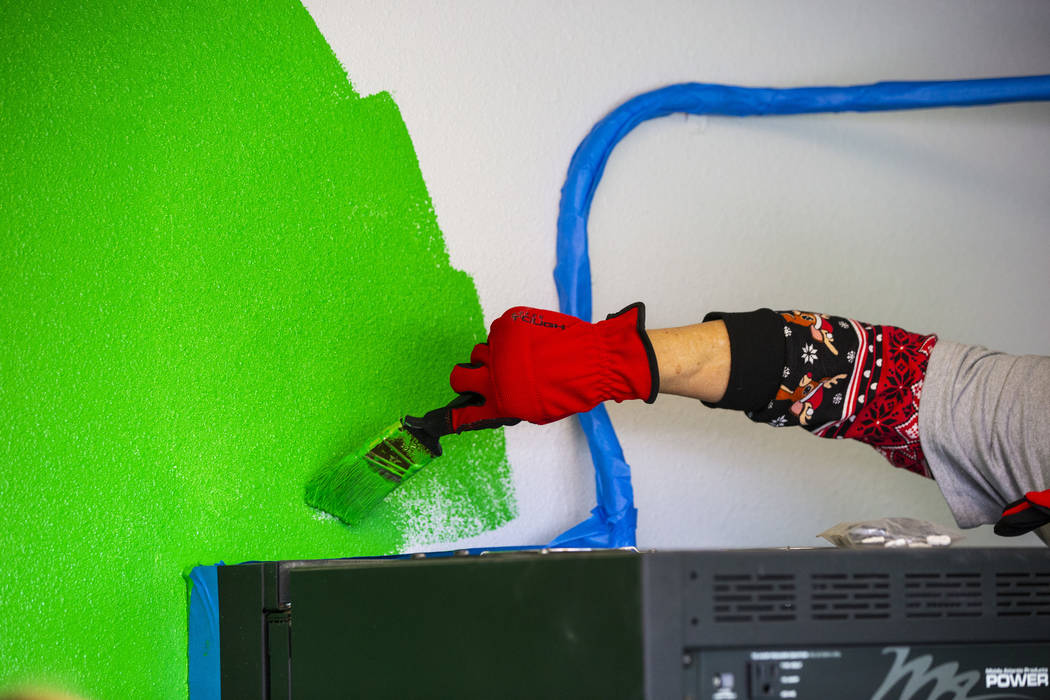 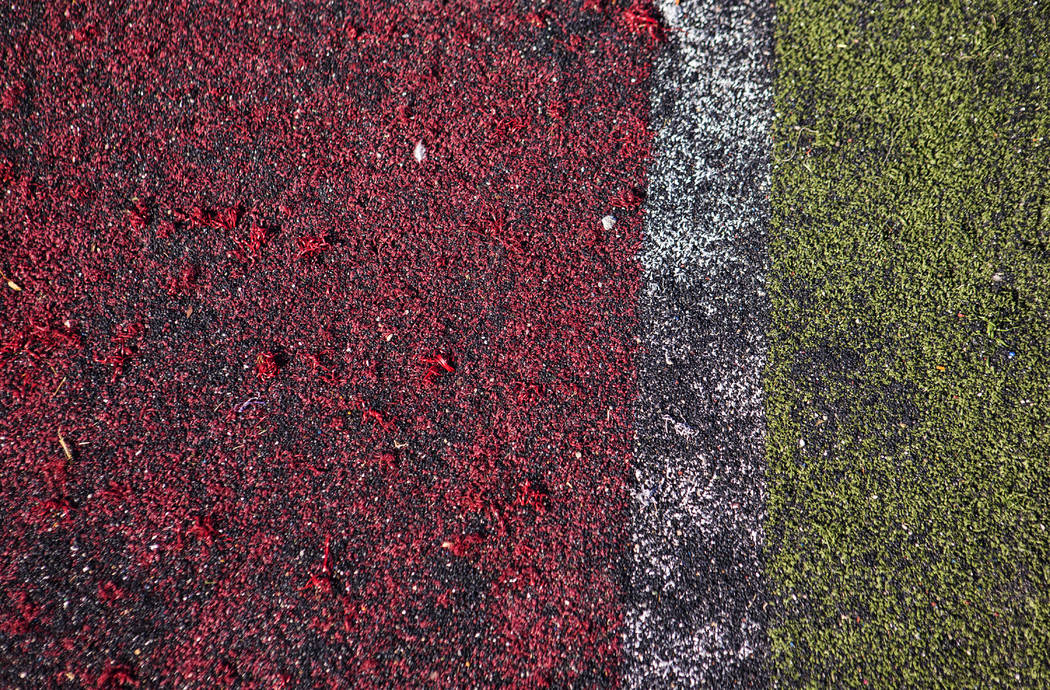 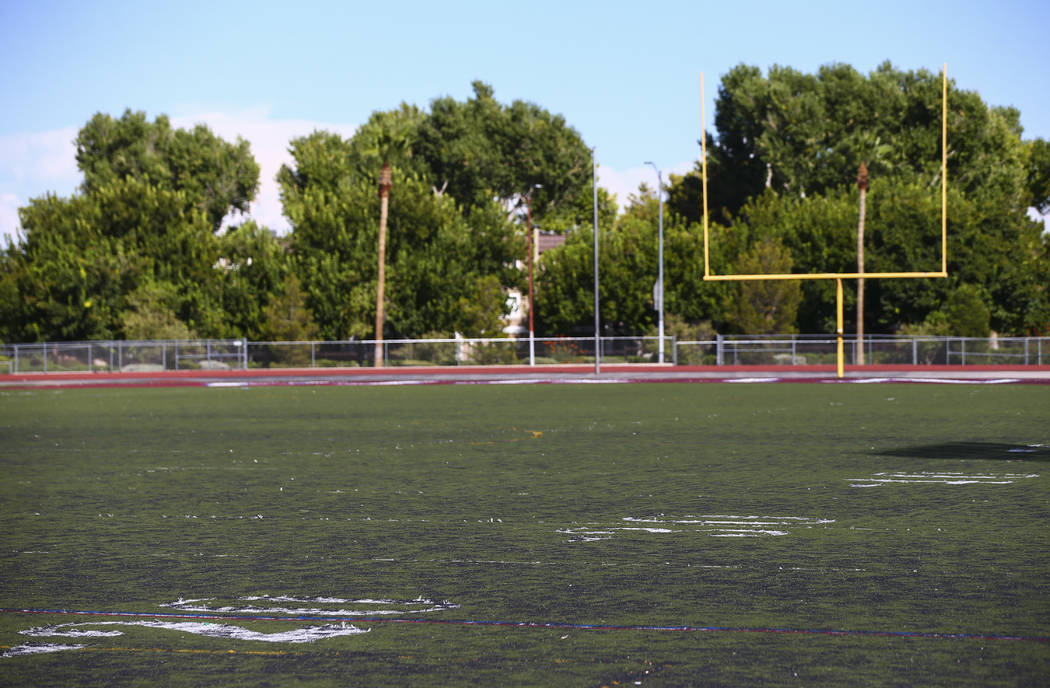 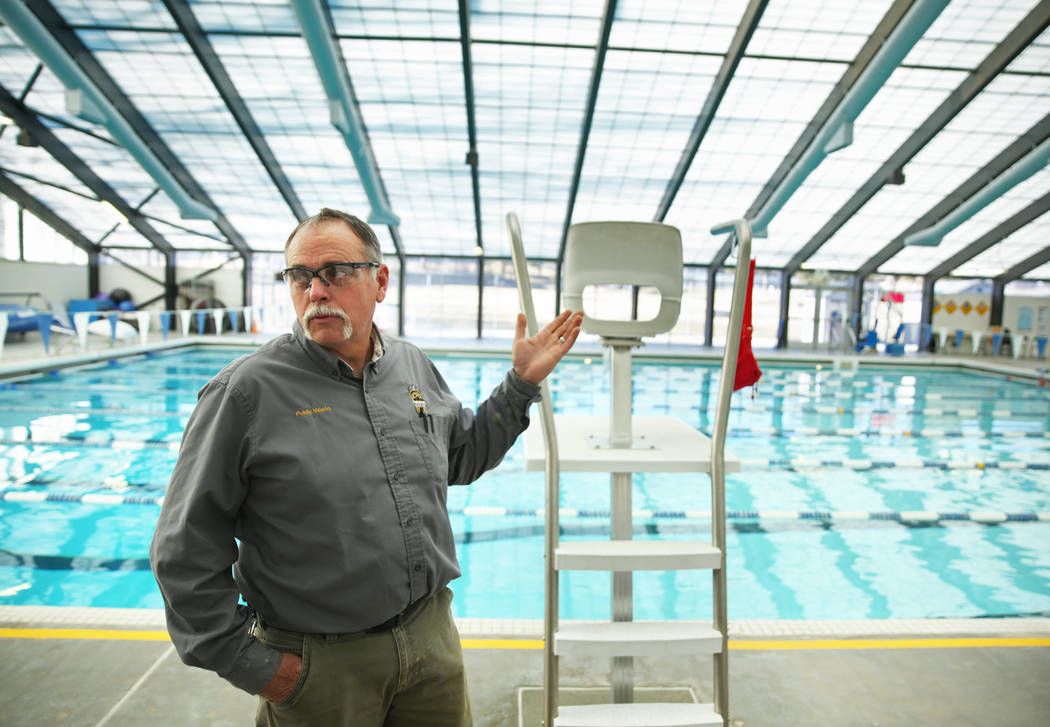 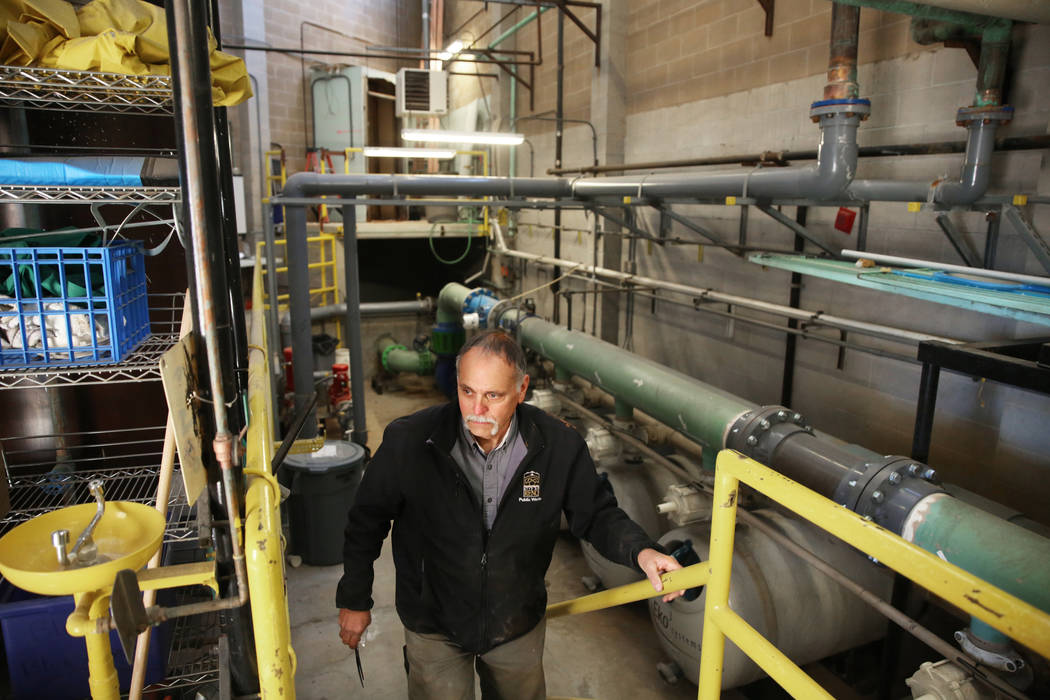 Many of Nevada’s government buildings, roads and assets are living on borrowed time.

Years after the end of the Great Recession, many government agencies in the Silver State still lack sufficient funding and staff to maintain critical infrastructure at locations ranging from schools to prisons. Projects are postponed for years in some cases, creating hazardous conditions for both employees and private citizens.

When overworked buildings and equipment finally break down, the cost to bring them back online is far greater than paying for maintenance and repairs along the way, according to one expert. In other words, governments — and taxpayers — end up paying much more over time.

Signs of the problem are all around us:

— Corrections officers in Southern Nevada suffered injuries after deteriorating roof hatches at High Desert State Prison fell open and struck their heads, a prisons official testified during the 2019 session of the Nevada Legislature. Floors began to collapse at a prisoner fire camp in Humboldt County before Nevada lawmakers approved funding to replace them last year.

— Upward of $40 million is needed to keep Nevada’s most critical state-regulated dams in tip-top shape, according to the American Society of Civil Engineers, but the state’s annual safety budget is less than $300,000.

— In 2015, an indoor public pool in Reno was closed for more than a year after its roof began to sag due to extensive water damage. The city technician responsible for monitoring it had been laid off in 2010.

“Somebody could have really gotten hurt,” Frank Avera, Reno’s maintenance and operations manager, said of the Evelyn Mount Northeast Community Center Pool. “Fortunately, no one did. But it just amplifies the fact that if you don’t take care of things … there are big consequences to that.”

This year, the Review-Journal will explore this problem in “State of Disrepair,” an occasional series examining the challenges, consequences and possible solutions to the practice known as deferred maintenance. Many local government agencies were unable to estimate a price tag for their backlogs, but those that did provided eye-popping sums.

Nevada’s Department of Administration, which maintains most state buildings, claimed more than $600 million in deferred maintenance needs as of 2019. The colleges comprising the Nevada System of Higher Education estimate a backlog of more than $200 million worth of work.

At the Clark County School District, where officials report almost 300 schools are more than 20 years old, unfunded preventive maintenance needs sat at more than $4 billion as of June, according to the district. Former school facilities chief David McKinnis told the School Board in November, just a few months before leaving the district, that maintenance was “grossly underfunded” and “mismanaged.”

“There should be another term that’s used,” McKinnis said. “And that is ‘no maintenance.’”

A lack of money and manpower are causing the delayed repairs and maintenance, government officials say.

As home values in Nevada plummeted during the Great Recession, so did property tax revenues collected by local governments, school districts and the state. That funding remained low even as home prices recovered because of statutory caps on property tax increases. Last year, those caps reduced property tax bills by more than $1 billion.

But increasing government revenues, through property taxes or other means, will only help address deferred maintenance if the new dollars are directed toward eliminating backlogs, Levine said. That can be a difficult sell to elected officials and public-sector unions, who want revenue growth applied to essential services and salary and benefit increases for the government workforce.

“It’s something that could be prioritized, but the whole concept of deferring (maintenance) is that other priorities take precedence,” Levin said.

Local governments also slashed their staffs, including maintenance workers, during the Great Recession because of budget cuts. Some report their remaining workers are so consumed with making emergency repairs that they have almost no time to focus on preventative maintenance.

What needs repair?
You can be our eyes in communities as we look into deferred maintenance decisions by government agencies. Let us know what needs fixing. Email us suggestions, photos or video and your contact information.

In North Las Vegas last year, public works employees were diverted from their scheduled duties for more than two weeks after a section of Gowan Road sank about a foot because of longstanding, unaddressed problems. Three lanes had to be shut down and repaired immediately because of the hazard to drivers.

“You don’t have a chance to plan ahead,” North Las Vegas Public Works Director Dale Daffern said. “The priorities, right now they’re set on more of an emergency basis.”

The emergency repair project on Gowan Road cost about $80,000, Daffern said, much more than the cost of regularly maintaining the street. That’s common, according to one expert.

The parts and labor required to fix broken equipment almost always cost at least 15 times more than it would to keep the equipment maintained, said David Geaslin, a Texas-based maintenance consultant for more than 30 years. The cost is even higher after factoring in the price of temporary replacement equipment or closing a building during major repairs.

“Everyone gets so wound up with the big problems that they ignore the little ones,” said Geaslin, whose past clients include Texas State University and the city of San Antonio. “And when you finish a big one, another little one becomes a big one.”

Geaslin said he has seen government agencies with backlogs benefit from performing what he calls “vertically integrated maintenance.” Instead of focusing on a widespread issue, such as plumbing across an entire college campus, Geaslin recommends focusing on repairing all maintenance problems in one or two buildings at a time.

The approach allows workers to address a large number of small problems in rapid-fire succession, Geaslin said, preventing them from becoming more complicated and costly.

“One day you look up and there’s no new big projects coming up behind you,” he said. “You just stamp out all the snake eggs before they have a chance to hatch.”

Nevada’s government agencies are experimenting with a variety of approaches to cut down on their deferred maintenance backlogs.

The Washoe County School District has spent close to $130 million to repair and maintain schools since 2016, a move made possible after local voters approved a half-cent sales tax increase. The money spent so far is equivalent to more than half the cost of the school district’s deferred maintenance needs prior to the tax increase, and it has addressed a backlog of leaky roofs and aging heating and air-conditioning units. The tax increase also has been used to fund the construction of new schools.

“It’s been really rewarding to see that, how this is affecting our students and their families,” school district spokeswoman Samantha Frederickson said. “They can absolutely focus more on learning.”

Other local governments are using technology to attempt to conquer their backlogs.

Washoe County created a countywide database in 2018 to track both how soon an asset needs to be replaced and how critical it is to the county’s operations. In a county with more than 2 million square feet of public facilities, the tool is proving invaluable in deciding what projects get funding first.

Similarly, the city of Henderson uses two databases to track its city fleet and public works assets that are generally worth $1,000 or more. The software alerts employees when regularly scheduled maintenance is due, ensuring that small problems don’t develop into big ones, said Public Works Director Ed McGuire.

Other governments are trying to do more with the limited resources they have.

Last year, the Clark County School District placed on-site building engineers at more than 20 schools in an effort to promote preventative maintenance and tackle immediate needs as they arise. At a cost of $66,000 per school per year, the pilot program addresses everything from unclogging pipes to fixing heating and air conditioning systems.

A school district spokesman likened the strategy to a family taking care of a car. Changing the oil and rotating the tires on a regular basis can prevent a catastrophic failure from happening in the future.

How effective the initiative will be in addressing the school district’s maintenance needs remains to be seen. According to McKinnis, the former school facilities chief, the county’s aging school buildings need all the help they can get.

“We have made it so we are dangerously close to imminent failure of our buildings,” McKinnis told the School Board in November. “If we don’t act now, the future consequences will result in school closures.”

Editor’s Note: A previous version of this story misspelled the name of Meredith Levine, economic policy director for the Guinn Center.

Don't miss the big stories. Like us on Facebook.
What needs repair?
You can be our eyes in communities as we look into deferred maintenance decisions by government agencies.
Do cracked, uneven sidewalks make your morning walk a dangerous journey? Is your local park looking unkempt? Does your child’s school become uncomfortably hot when the air conditioning fails?
This is your chance to let us know what needs fixing. Use the form below to submit suggestions, photos or video and your contact information.