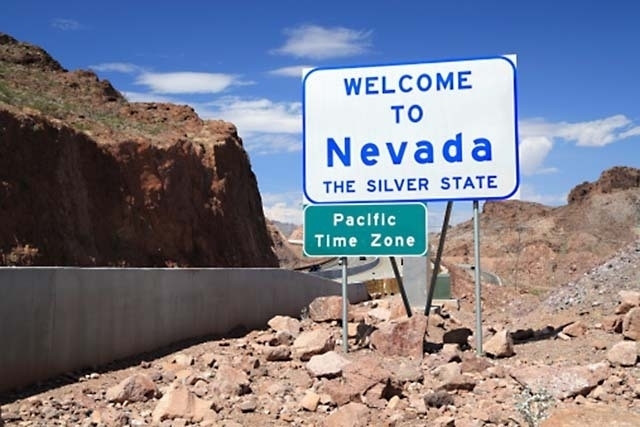 Nevada is ranked the third-best state for taxes on business, just behind Wyoming and South Dakota, according to a new study released on Wednesday. The worst business climates were in New York, New Jersey and California. (Thinkstock)

As Nevada Day approaches — celebrated Friday, for you newcomers — you ought to know how to speak and behave like a Real Nevadan.

First, learn how to pronounce the state’s name. It’s Ne-VADD-ah, not Nev-AH-da. Newcomers and most national television sports broadcasters seem to think Nevada, the Spanish word for snowcapped, should be pronounced as they were taught in high school Spanish classes.

Sorry, teachers. Pronounce it Ne-VADD-ah, or people will instantly recognize you as a newbie and might think you’re stupid. Many will correct you, even in the middle of speeches. President George W. Bush got corrected and Michelle Obama was booed when they mispronounced it.

Of course, prominent Nevadans like gaming czar Steve Wynn still say it wrong. He provides a lot of jobs, so he can be forgiven. This is a state where people are proud to work.

Some politicians even lose elections for mispronunciation. Former Assemblyman Harry Mortenson, D-Las Vegas, always said it wrong and even proposed a bill that stated it was correct to pronounce it either way. Mortenson was defeated in the Democratic primary when he ran for the state Senate.

Then there are the Nevada rules.

You don’t wear a cowboy hat unless you can ride a horse, have stepped in a couple of cowpies or are a very pretty girl. Of course, many ranchers today wear baseball caps and ride four-wheelers. You don’t have to love a four-wheeler or feed it when the temperatures drop to five below zero. They are 21st century Real Nevadans.

But a city slicker wearing a cowboy hat in Battle Mountain will get some nasty stares and ridicule, just like the tourist guy wearing Bermuda shorts in Las Vegas.

You can wear cowboy boots, particularly if you are a politician. People will marvel about your footwear and ask where they can buy them. You might even pick up votes. Good boots cost a lot of money — something a Real Nevadan never has enough of.

You also must read Real Nevadan books: Mark Twain’s “Roughing It,” Ed Reid and Ovid Demaris’ “The Green Felt Jungle,” Robert Laxalt’s “Sweet Promised Land,” Hank Greenspun’s “Where I Stand: The Record of a Reckless Man” and any book about Howard Hughes and his habit of storing his urine in Mason jars.

And Oct. 31 isn’t Halloween, it’s Nevada Day, the anniversary of Abraham Lincoln announcing our admission into the United States on Oct. 31, 1864.

Then there is Basque food. The Real Nevadans tell there friends how they visited JT Bar in Gardnerville or the Martin Hotel in Elko and just loved the huge helpings of Basque food.

Of course, Real Nevadans know the Basque food really tasted like the stuff Mom threw on their plates, and the red wine that came with the dinner tasted like a $2 bottle of Boone’s Farm sangria wine.

As a Real Nevadan, you also must know how to pronounce names of cities and places like Genoa, Verdi, Ely and Beowawe.

Genoa is Ge-NO-ah. This is not Italy. We pronounce Nevada’s oldest town in Douglas County the Real Nevadan way.

Verdi is Verd-eye. This is a town in Washoe County, not an Italian composer of operas.

Ely is E-lee. The White Pine County city is not E-lie as in the “Eli’s Coming” song or the first name of Ellie Mae Clampett in the “Beverly Hillbillies” TV show.

If you think this pronunciation stuff is silly, then why do people in Ohio pronounce their city Lime-ah, not LEE-ma, like the city in Peru? We all have our idiosyncrasies. When in Nevada, say it like Real Nevadans do.

Nobody in Nevada, or elsewhere really, can pronounce or give a true meaning of the origin of Beowawe, a hamlet in Eureka County. But try Be-O-wah-we. It’s close enough.

According to some accounts, the word was Paiute for an open gateway. But one writer said when a railroad manager arrived, the Paiutes shouted “Beowave, Beowawe” meaning a man with a fat butt. Another said it was Paiute for a big-butted woman, while others said it was Shoshone for a big wagon.

Whatever the real meaning, it has something to do with being big.

Folks in the cow counties should examine their history. Real Nevadans know that people in the area have not always voted Republican. In fact, some of their greatest residents were Democrats. Democrats who qualified for cowboy hats.

How about Sen. Norm Glaser, D-Halleck. This rancher spearheaded the state’s Sagebrush Rebellion seeking control of more federally managed lands in the state in the 1970s. Even President Ronald Reagan later called himself a Sagebrush Rebel.

Glaser was a powerhouse in the Legislature for decades. He even backed tax increases when needed to fund government and lived in cow country.

To witnesses who did not respond quickly to his questions, Glaser would say: “We’ve rode this ground three or four times already.” Spoken like a Real Nevadan who earned his cowboy hat.

Then there was Sen. Floyd Lamb, a Democrat who at times represented both Lincoln and Clark counties. He popularized a couple of Real Nevadan phrases.

He’d use, “You cannot kill the goose who laid the golden egg” as a warning not to pass any bill that might hurt the gaming industry.

Another favorite Lamb phrase was, “You have to know when to hold ’em and to fold ’em.” He was saying this before singer Kenny Rogers had a hit off the phrase. To Lamb, it meant how to play politics with members of the opposite political party.

Even after being convicted of taking a $23,000 bribe in 1983 and spending nine months in federal prison, old cowboy Lamb remained popular. Lincoln County residents later elected him to their county commission. Now that’s Real Nevadan.

Most of all, Real Nevadan newcomers should remember this is a great and proud state, not only the Silver State, but also the sagebrush, gold and wild horse state, way out in the great of the golden West, as the song goes.

And its creation can be credited to America’s greatest Western heroes.

Explorer John C. Fremont came here in 1843-44 and named many of the lakes and rivers. He became the first Republican presidential candidate to speak against slavery. Since Fremont streets are all over Nevada, Fremont should be an honorary Real Nevadan.

His paths were found by none other the Christopher “Kit” Carson, a true Western icon. Historical purists say Carson City was named after the Carson River and only indirectly for Kit Carson. Those who live here think there was nothing indirect about Kit Carson.