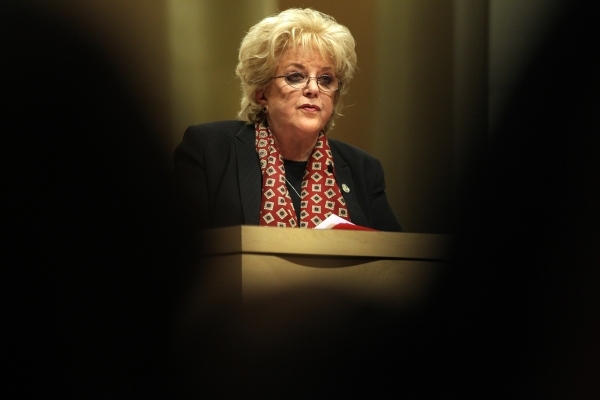 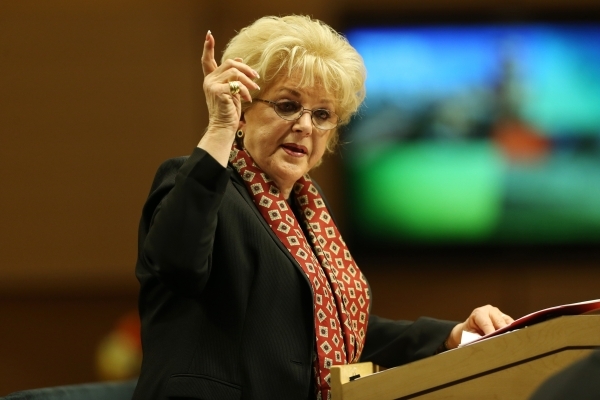 I’m not referring to Las Vegas Mayor Carolyn Goodman’s 2016 State of the City speech. I’m referring to the tweets that flashed on a monitor during her remarks Jan. 7. For those of us watching on television, the Twitter feed distracted from her speech. I urge her to call a halt to televised tweets next year.

People love to see their tweets on TV, but when she was talking about substantive issues, the tweets drew attention from her words — especially when they were wrong.

Some “twits” as Goodman called them, clearly were cheerleaders or didn’t understand government and showed their ignorance. Astute staffers quickly tweeted accurate information.

One wrote that Goodman wants to increase medical reimbursements, not distinguishing between Medicare, under which the federal government sets the reimbursement rates for doctors, and Medicaid, under which states set the rates.

One tweeter thought when the mayor spoke of 50 new projects valued at $305 million, those were revenues, instead of the value of the projects.

Another said the council chambers were “packed” when clearly they were not and anyone watching on TV could see they weren’t.

Some twits were trying to curry favor, talking about how good she looked, how funny she was, how they loved her calling her husband “sweetheart.”

This year Goodman had genuine bragging rights for her own accomplishments, instead of brags about the vision and leadership of the former mayor, her husband, Oscar Goodman.

This year, she could talk about how, in a cooperative effort with other local governments, every homeless veteran in the valley who wanted housing was housed.

Her husband didn’t make the homeless a priority. She did, and she deserves credit for it.

City spokesman Jace Radke on Wednesday provided figures that weren’t in her speech. As of Oct. 16, there were 344 homeless veterans, and all but 11 were in housing. Those 11 didn’t want housing. An additional 510 homeless veterans have moved into permanent housing, for a grand total of 854 homeless veterans who in 2015 were no longer living on the streets, under bridges or in washes across the valley.

Now Goodman is focusing her attention on the mentally ill, another issue her spouse ignored during his 12 years in office.

Those two important issues fell at the end of her hour-long speech. The length of her address became a running joke throughout, starting when she set an egg timer and said she’d be finished by 42 minutes and 28 seconds.

Later on, even her husband was tweeting, “I would have been done by now.”

She fired shots at the Las Vegas Review-Journal’s editorial board, as she did last year because it opposed using public money for a stadium that never became a reality despite her earnest efforts.

This year, her wrath was aimed at the newspaper’s criticism of the city’s use of tax dollars to support education.

Senior editorial writer and columnist Glenn Cook, now serving as the Review-Journal’s interim editor, dubbed Goodman one of the five worst taxpayer nightmares of 2015 in his Jan. 2 column. “She pushed mightily for a taxpayer-funded downtown soccer stadium no one wanted, in defiance of a petition against the plan,” he wrote. “Then, after it died, she moved forward with a parking garage at the Symphony Park site that’s certain to be empty years after it’s completed. Her latest bad idea for your money amounts to the creation of a city Department of Education, even though the city has no role in funding or managing schools. Somebody make her stop!”

In her speech, Goodman responded, “Despite the constant and ever-embarrassing inaccuracies reported by the Review-Journal, the city does know we don’t control education, nor does the city control the Clark County School District or the Nevada Department of Education.”

But she said “the city will not falter one bit” to support ancillary programs and before- and after-school services such as Safe Key and My Brother’s Keeper. The city will continue to work together with Three Square Food Bank to provide programs in 66 elementary schools and a few middle schools.

“Are you listening RJ editorial board?” she said.

In December, at her urging, the City Council created a new Department of Youth Development and Social Innovation to improve education and promote education reform. The city said the department won’t need new positions at first but will require a reorganization of existing personnel.

Goodman omitted costs. City Manager Betsy Fretwell predicted the new department would spend around $6 million annually, including around $3.6 million for pre- and after-school programs. In an interview late last year, Fretwell said she was still compiling the city’s total spending on existing education initiatives, so the cost seems to be a moving target.

It’s positive to share credit for accomplishments, but Goodman overdid it, as she does every year.

Toward the end, she became a little loopy and introduced the same three staff members in her office that she had introduced earlier. Perhaps she was overly tired, but sometimes it’s best to stick to the written speech and not get off point.

Goodman said Faraday “will only prove to be a boon for all of us, and we know it.”

She and her husband own land in Apex Industrial Park, which they have made public in annual financial disclosure forms.

Was she speaking broadly or specifically about that “boon”?

— Jane Ann Morrison’s column runs Thursdays. Leave messages for her at 702-383-0275 or email jmorrison@reviewjournal.com. Find her on Twitter: @janeannmorrison