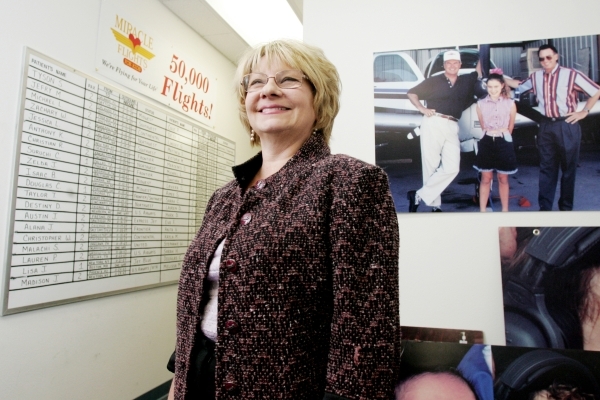 Mark Brown, new CEO of the renamed Miracle Flights, said he will receive a $293,000 salary.

McGee won’t speak to me, but Brown is authorized to speak for her, and he defended her retirement package saying: “She deserves it. There would be no Miracle Flights if not for Ann.” There also would be no huge $53 million bump in the nonprofit’s coffers from a British Airways fuel surcharge lawsuit if not for McGee, Brown said. Nor would there have been 96,000 free commercial flights for sick children except for McGee.

For most people, $344,000 is a big retirement. But Brown said both his salary and her salary feel in the range of similar nonprofits, according to PRM Consulting. In his case, he said the salary is a little below average.

The nonprofit will purchase annuities of about $6 million to pay for the Henderson couple’s combined retirement of $426,000, and the annuities will remain as an asset for Miracle Flights. An earlier Internal Revenue Service form made it appear McGee would receive a $2.3 million lump sum for her retirement, but that is not the case.

She agreed to give up a raise this year and also agreed not to be paid for any consulting she does for Miracle Flights. She remains as a board director, but those are not paid positions.

The Review-Journal began examining Miracle Flight’s salaries and in 2006, McGee paid herself a $196,000 salary and her husband $51,000. For a nonprofit that has had revenues in the range of $2.5 million, that seemed like a disproportionate salary.

Donations dropped after I reported on McGee’s refusal to discuss the charity or its operations with me and the $40 million settlement donation.

“The perception issues will only get better with time,” Brown said.

The British Airways lawsuit settlement was from the fuel surcharge case. Under the cy-pres doctrine, in a class-action lawsuit, the settlement money would go to promote the interests of a class, in this case, sick children needing flights was considered worthy.

Her outside board members took notice of this new $53 million.

Former Henderson Councilman Larry Scheffler, who had been with the board for 20 years, had brought in two new board members — former Las Vegas Councilman Michael McDonald and McDonald’s sidekick, Rick Henry.

Brown said McDonald and Henry hadn’t attended board meetings until the settlement money came in.

According to Brown, the outside board members pitched to McGee that it would be smart to get into the loan business with a company called Med Lien Management, which bought up medical liens from doctors and hospitals at a discount and then tried to get the liens paid off by patients.

“The outside board members brought it to her and convinced her it was a good idea,” Brown said.

The nonprofit granted a $2.2 million loan to Med Lien in April 2013. Two years later, the loan was in default. By then, Scheffler, McDonald and Henry were no longer on the board.

In June, McGee still at the helm of Miracle Flights, sued Med Lien and its partners, Brad Esposito, Lincoln Lee and McDonald, alleging fraud. The lawsuit alleges McDonald did not disclose he was a partner or that he received a $200,000 finders fee.

The lawsuit is still in the discovery stage and has not been set for trial.

Here’s my question: Why was McGee so naive about Scheffler and McDonald, who both have been exposed in the news media for years because of ethical shortcomings? She wasn’t doing business with Walt Disney. She was doing business with disgraced politicians

In 1996, the Nevada Ethics Commission ruled Scheffler broke ethics laws at least six times while he was on the Henderson City Council when he voted on development projects without disclosing that he owned property nearby.

In 2001, the commission decided McDonald violated ethics laws by using his council position to help Scheffler try to sell a park to the city. At the time, McDonald worked for Scheffler at Las Vegas Color Graphics.

McDonald has been in the newspapers, and often not in a good way, for more than a decade.

Did McGee not read the newspaper or watch TV news?

Brown was unable to say why she has no knowledge of Scheffler’s and McDonald’s ethics cases. “She held elected officials in high regard,” he said.

McGee was smart to retire. Based just on the snooker job her board seems to have pulled on her, she lacks the capabilities to run a $53 million operation.

Brown is a longtime businessman with experience with nonprofits and plans to be able to expand without engaging in questionable loans, investing in real estate or trusting the untrustworthy. He should be able to right the charity which has rocked McGee’s recent leadership.

One way to judge whether he succeeds will be to see if Miracle Flights’ ratings improve.

Right now Charity Navigator gives it two stars out of a maximum of four and overall gives it a 76 percent score out of 100. Program expenses were 50 percent while fundraising expenses were 39 percent and administrative expenses were 11 percent under McGee’s leadership in 2014.

Now it’s up to Brown to upgrade Miracle Flights’ operations and match or even surpass similar nonprofits.

It won’t be easy.