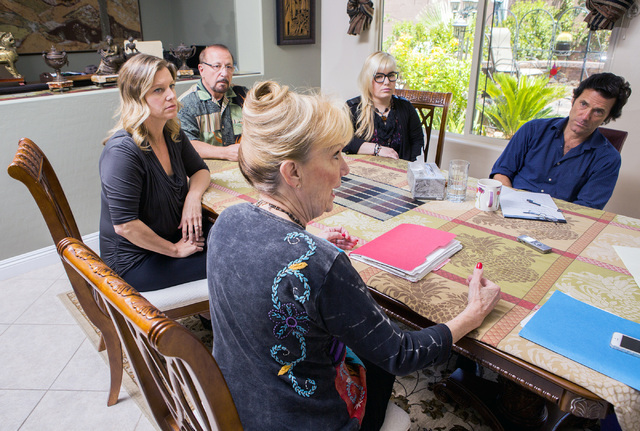 The possibility that one of the members of the Charlie Manson cult might be paroled prompts the DiMaria family of Henderson to urge Calif. Gov. Jerry Brown to deny her parole. The brother of Peggy DiMaria (center front), hairstylist Jay Sebring, was killed by Manson family members. Left to right are her daughter, Christy; her husband, Tony; daughter, Mishele; and son, Anthony. (Jeff Scheid/Las Vegas Review-Journal Follow @jeffscheid); 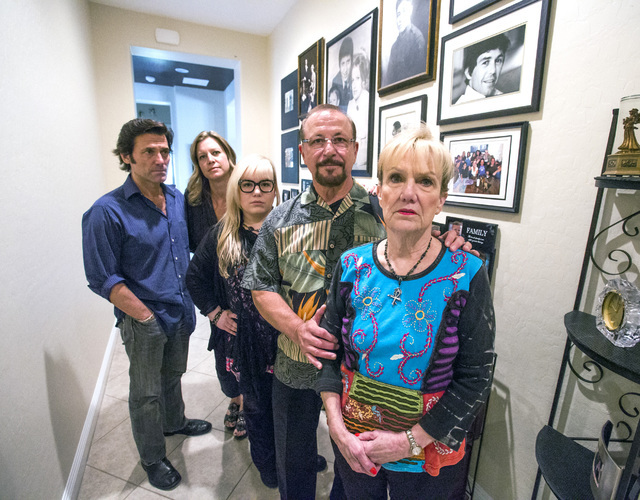 The family of murder victim Jay Sebring stands next to the wall of family portraits in the DiMaria'sHenderson home. On the right is Sebring's sister Peggy DiMaria, flanked by her husband, Tony, and their three children, Mishele, Christy and Anthony. Sebring's photo is above Peggy's head. (Jeff Scheid/Las Vegas Review-Journal Follow @jeffscheid) 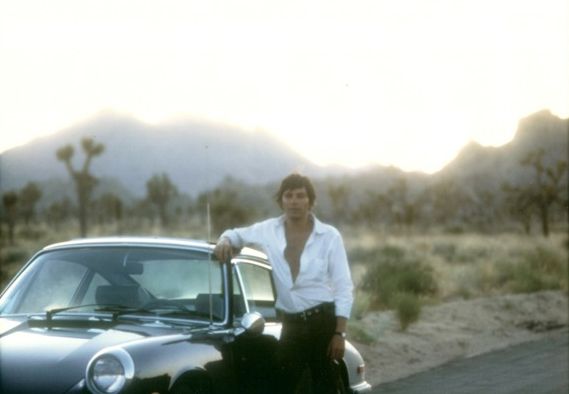 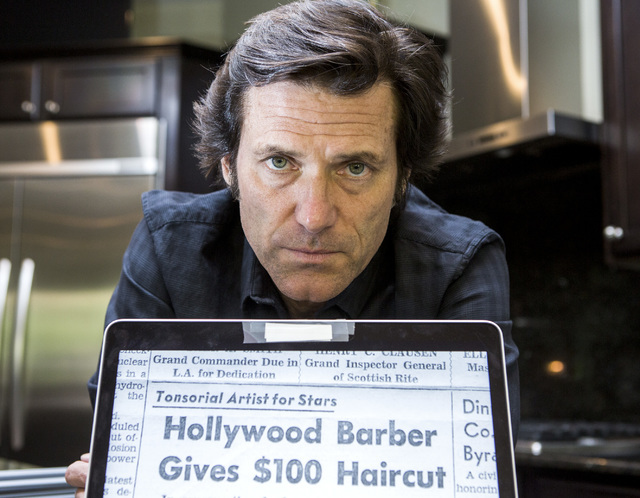 Anthony DiMaria's documentary about his uncle's life, legacy and death includes this newspaper clip about Jay Sebring's career as a men's hairstylist. He styled for actors including Steve McQueen, who gave a eulogy at Sebring's funeral. (Jeff Scheid/Las Vegas Review-Journal Follow @jeffscheid) 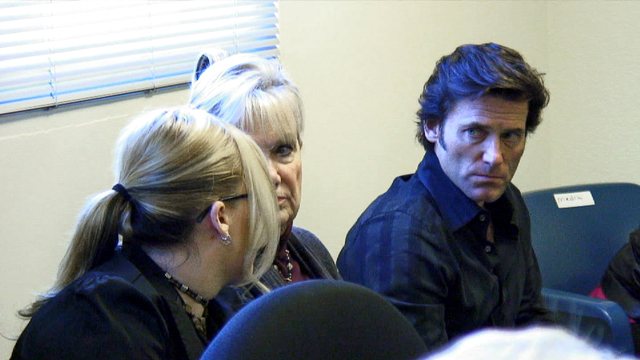 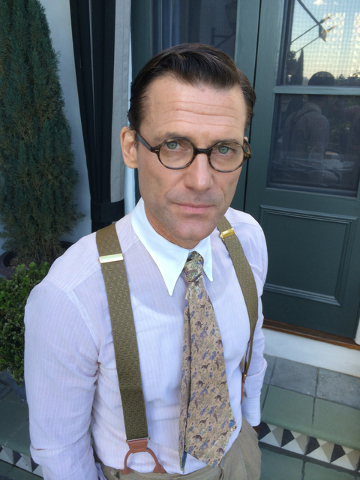 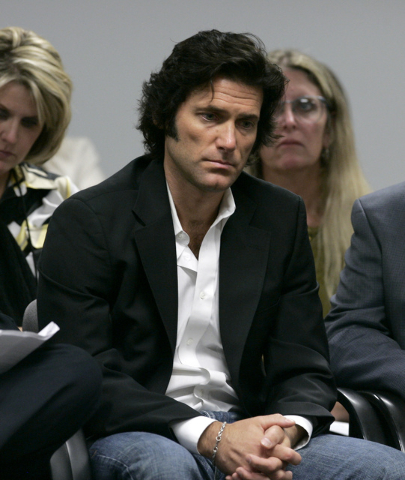 Anthony DiMaria, the nephew of Manson Family murder victim Jay Sebring, waits to appear before state parole officials in July 2008, to urge that they reject an appeal for compassionate release for Manson follower Susan Atkins at a hearing in Sacramento, California. Atkins died a year later, while still in prison, of brain cancer. (Rich Pedroncelli/AP) 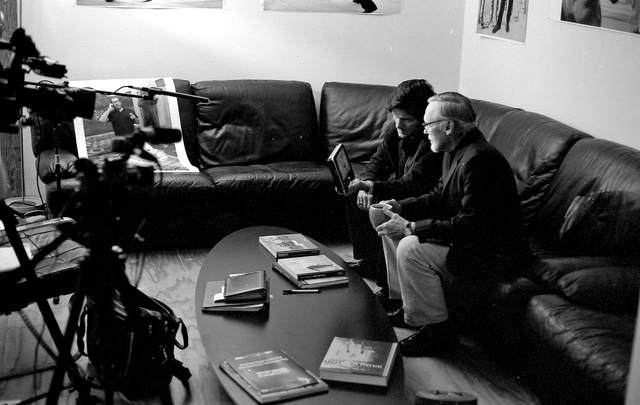 Dennis Hopper was interviewed at his Venice, California, home for a documentary on Jay Sebring, who was killed by followers of Charles Manson.

For more than 15 years, Anthony DiMaria has balanced acting and researching the horrendous murder of his uncle, Jay Sebring, by followers of Charles Manson 47 years ago.

DiMaria was only 3 at the time, and his memories of Sebring, who was 35 when he was killed, were of romping with Sebring when he visited the DiMaria family in Las Vegas.

One impact of the murder? “I sleep facing the bedroom door. I know that people can come in and slaughter me and the people I love,” DiMaria said.

Many Americans had the same reaction after multiple murders ordered by Manson and executed by sycophants who did what he asked without question.

The murders of Sebring, pregnant actress Sharon Tate, coffee heiress Abigail Folger, her lover Wojciech Frykowski and teenager Steve Parent, who was there to visit the caretaker, shocked the world. My stories Sunday described the enduring pain the DiMaria family has suffered since losing Sebring.

In “The White Album,” Joan Didion wrote, “Many people I know in Los Angeles believe that the Sixties ended abruptly on August 9, 1969, ended at the exact moment when word of the murders on Cielo Drive travelled like a brushfire through the community, and in a sense this is true.”

When he was a freshman studying acting at the University of Southern California about 1985, DiMaria stumbled upon a book that portrayed Sebring negatively. He discovered many accounts were inaccurate.

“I started reading things I hadn’t come across before. I felt at that time, as disturbing as it would be, I needed to know the truth. I started learning from original sources.”

An article by Dominick Dunne, published in Vanity Fair in 2001, prompted DiMaria to make a documentary on his uncle. To tell the real story, not just of the gruesome murders, but of Sebring’s joyful life and innovations as a hair designer.

To do this, he talked to more than 60 people, including his mother, Peggy DiMaria, Sebring’s youngest sister, and her husband, Tony. His family supported him, knowing he would tell the real story with sensitivity and accuracy. Filming began in 2007.

The film is in post-production, finishing the final cut and securing clearances and rights.

For more than 15 years, the documentary overlapped DiMaria’s acting career. He started as a sophomore at Bishop Gorman High School and studied his craft at the University of Southern California. He’s worked in New York and Los Angeles over the years, including television roles in “Deadwood,” “CSI,” “The Sopranos” and “Ray Donovan.”

When he’s not acting, commuting between Los Angeles and Henderson, DiMaria works part-time in the DiMaria Studio salon on Warm Springs Road off the 215 Beltway. His parents, Peggy and Tony DiMaria, and his sisters, Christy and Mishele, all hairstylists, work there as well.

His documentary and his acting “are rooted in storytelling, they’re not separate. Both are my lifelong endeavors,” DiMaria said. “Both are examinations of the human spirit.”

The human spirit could use some closer examination in today’s troubled world, where violence and art walk together but seldom in sync.