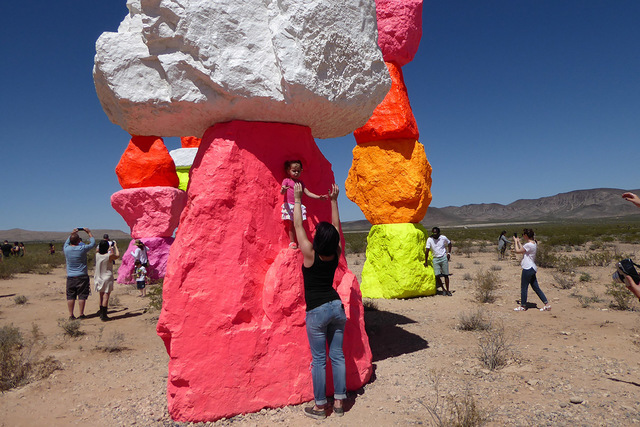 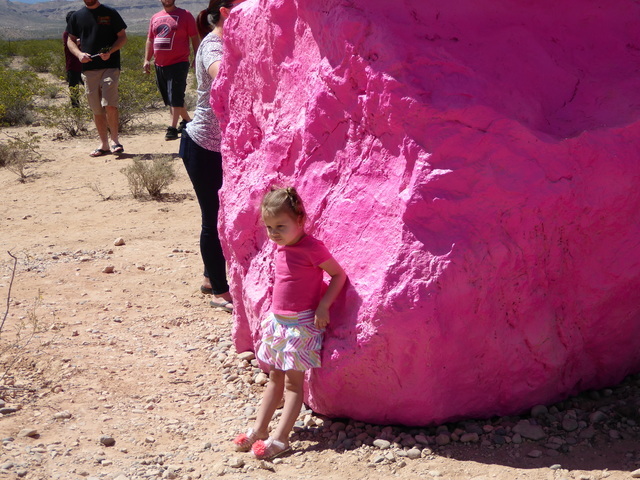 A girl explores the area at Seven Magic Mountains near Jean, Nev. on Sunday, May 22, 2016. (Jane Ann Morrison/Las Vegas Review-Journal) 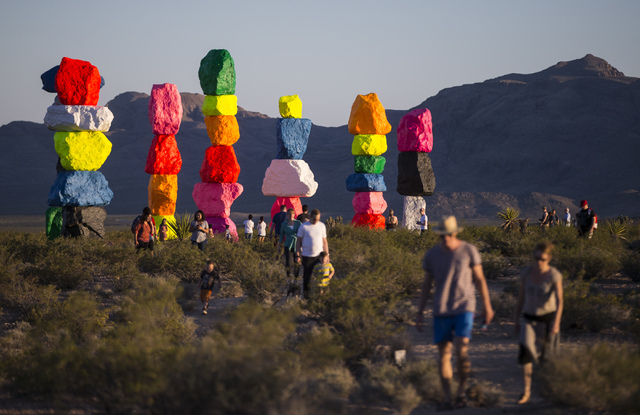 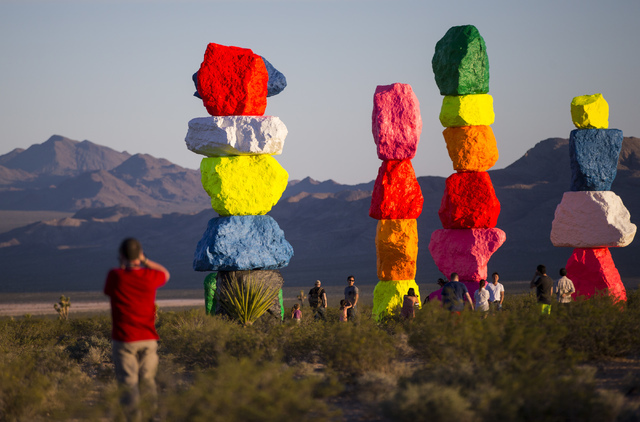 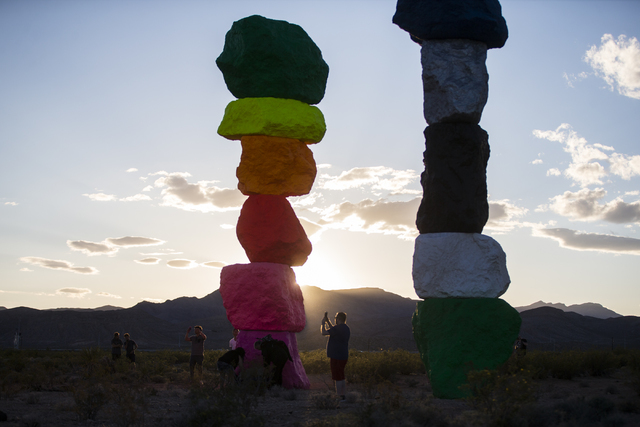 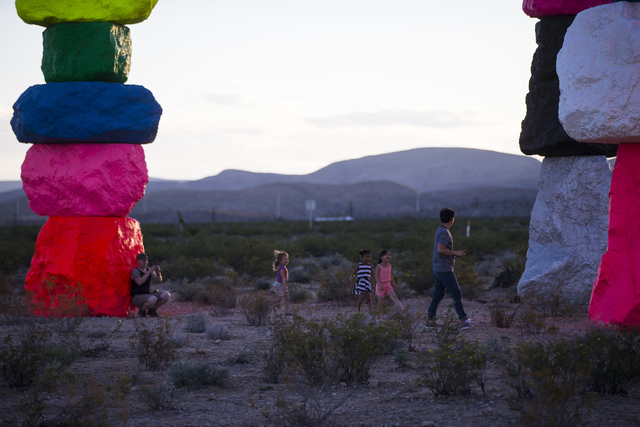 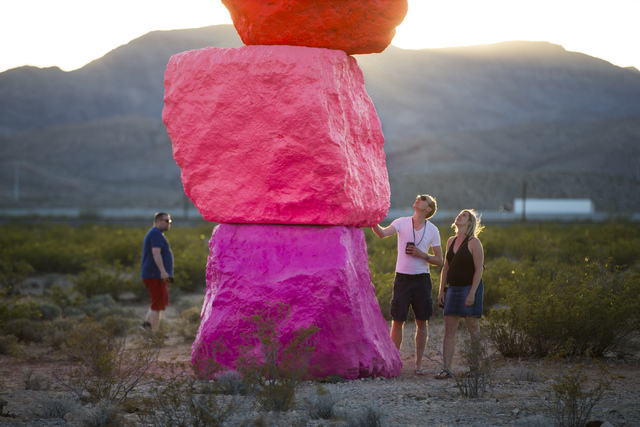 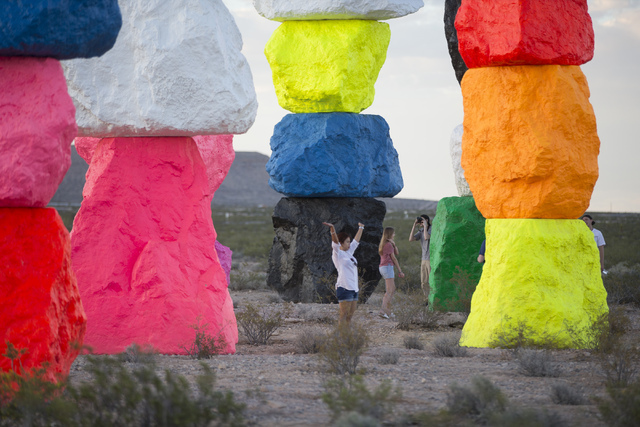 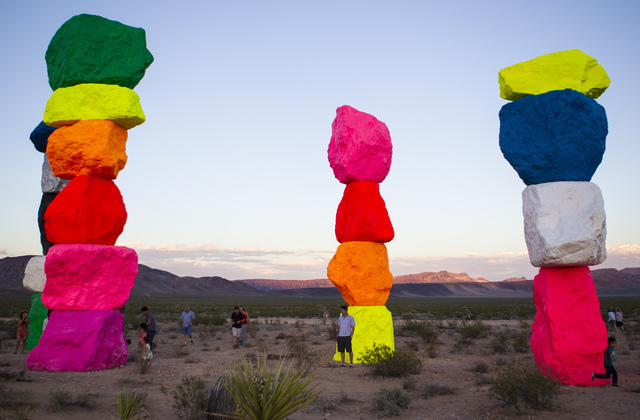 Let’s correct an erroneous assumption causing some Nevadans to fume.

“Seven Magic Mountains” cost $3.5 million, but not $3.5 million in tax dollars. The Nevada Commission on Tourism kicked in $100,000, but that body is supposed to give away money to draw tourists, and that’s a relatively small amount. The big bucks came from private donors, with Aria resort being the largest.

So quit whining about your tax dollars being wasted on public art. Just enjoy it, Philistines.

“Seven Magic Mountains” is already a controversial piece of art. People love it or hate it before they’ve even seen it.

I went south of the Las Vegas Valley, just off Interstate 15, to see it Sunday with two friends who both enjoy art. We loved it.

There are seven stacks of 33 boulders, standing between 30 and 35 feet, painted with eye-popping colors. They make you think.

They made some people think mostly about food, according to conversations I overheard.

The boulders reminded some of really big marshmallows. Others saw cotton candy. A man in a well-worn Pink Floyd T-shirt laughed and compared it to Play-Doh.

More than 100 people were romping and stomping in the desert that afternoon. Photographers, some with their phones but many with fancy-schmancy cameras, were moving about looking for the right angle. Others were posing like high-fashion models, or at least trying.

From one angle, there are seven wild totem poles in a line. Walk to the end and it’s like they were squeezed together, almost as if they had moved instead of the viewer.

People clearly were having fun. Kids were climbing up the first-level boulders (although they were warned not to). “Pick your color” a woman told a little girl wearing a pink T-shirt. Naturally, she was drawn to a ground-level florescent pink boulder.

The art installation opened May 11 and will remain there for two years. So far, there’s no way to track how many people will visit, according to Amanda Horn, director of communications for the Nevada Museum of Art, which along with the Art Production Fund has worked on producing the project for five years. The sponsors haven’t given up on finding a way to track attendance. They just haven’t figured out how.

The artist, Ugo Rondinone, born in Switzerland and based in New York, has an international reputation, although I admit never having heard of him. This work and others pictured on the Internet show his penchant for knock-your-socks-off colors. A detailed website is at sevenmagicmountains.com.

The easiest way to get to “Seven Magic Mountains” from Las Vegas is to pick up Las Vegas Boulevard and head south toward Jean. Or you can take Interstate 15 and get off at the marked exit. There’s a rough parking lot, which was almost full Sunday. People were piling out of their cars, many with Nevada license plates.

One warning I took seriously was to beware venomous snakes, since I’m not even fond of the harmless ones.

Some practical advice: The path is rocky and nothing is paved, so it’s not wheelchair-friendly. On hot days, you could be uncomfortable. On windy days, you could be eating dirt. You could brush up against cacti if you’re not careful. The howls of a little boy testified to that possibility.

For anyone wondering about the engineering and creation of the artwork, there will be a 90-minute panel discussion with a multimedia presentation as part of the Las Vegas Film Festival on June 11 at 2 p.m. Mining engineers, studio assistants and even lawyers for the project will discuss the complexities of creating “Seven Magic Mountains” from limestone boulders. Go to lvff.com for more information on the talk.

Horn answered one obvious question: Why did it cost $3.5 million to pile and paint boulders?

“The funds have been spent for fabrication costs, equipment rental, permitting, legal fees, educational components, road improvements, reclamation, staff and studio travel over the 5-year timeline, ongoing project management and more. The funds will also be allocated to de-install and land restoration at the end of the two-year period,” she explained.

The Nevada Museum of Art in Reno and the Art Production Fund in New York are still fundraising. No artist fee has been paid, nor have the two producers recouped any of their out-of-pocket costs (like staff time and travel), according to Horn.

“Seven Magic Mountains” was flat-out fun. Seeing hoodoos snap with color with the Jean Dry Lake Bed in the distance and the brown mountains behind that is a visual experience. It’s not just the colorful boulders that are art. The land behind it is art as well.