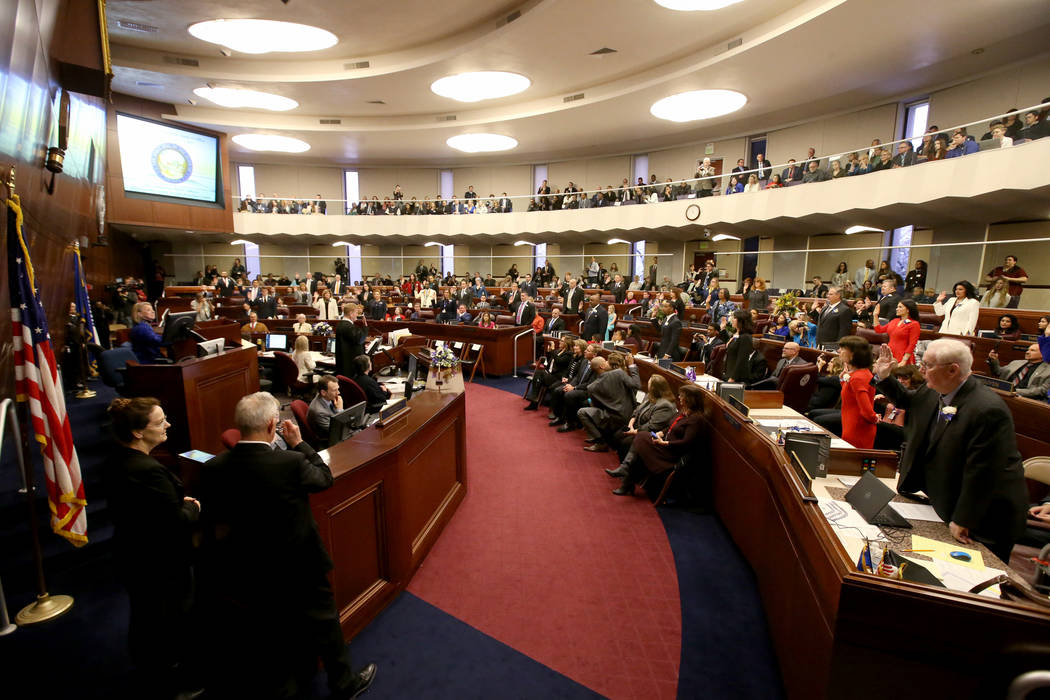 Assembly members take the oath of office in the Legislative Building in Carson City on the first day of the 80th session of the Nevada Legislature Monday, Feb. 4, 2019. (K.M. Cannon/Las Vegas Review-Journal) @KMCannonPhoto

Somewhere between the bill to create another task force to study teaching issues and a bill for pest management in schools, I lost it.

It’s been nine weeks since the start of the 2019 legislative session, and we’ve heard many bright ideas for improving public education.

But we haven’t addressed the elephant in the room — money.

An oft-cited school finance study recommends a base of $9,238 per pupil from the state just to adequately fund education. Gov. Steve Sisolak’s proposed budget offers an average of $6,052 per pupil.

It’s a pipe dream to think we’ll get to the recommended figure, but is anyone going to at least start talking about it?

Nah. Let’s focus on mandating libraries in every school instead.

In the midst of my meltdown, another funding study landed in my inbox (like we really need one more to tell us our funding of schools is poor). Nevada ranks 45th in “fiscal effort” to fund education, according to a new analysis from the Albert Shanker Institute and the Rutgers Graduate School of Education.

As an added distraction, the Legislature is entertaining eliminating initiatives introduced under previous Republican-controlled sessions.

Now parents are mad about eliminating the Achievement School District charter initiative and capping Opportunity Scholarships for low-income students to attend private schools. So we have to spend time during our state’s short legislative session fighting over those programs, too.

After a lengthy discussion of teacher evaluations in one meeting this week, state Board of Education member Felicia Ortiz lost it too.

But as far as additional education funding during this legislative session — actually increasing the pie — she later acknowledged that “it’s not going to happen.”

Legislators are working on a bill to change the state’s antiquated funding formula. But Sen. Mo Denis, D-Las Vegas, has made clear it’s not about raising extra revenue for education — just redistributing it better.

Adding to the angst, the district says it can’t afford to give 3 percent raises to its employees even with the governor’s extra money, which it projects will amount to $55 million to $70 million. The governor’s office, meanwhile, estimates the district will receive much more than that.

Perhaps it’ll take a cataclysmic event to actually enact meaningful change in education in this state — to have that tough conversation about money and how there’s not enough of it.

Like many teachers, Colleen Vosicky is frustrated to hear the district does not have enough funding for the promised raises. But she says lawmakers should have adequate funding for students as their first priority in any case.

“I mean, let’s start there,” she said. “If that’s not the priority, then you know darn well that we’re not going to be the priority as well.”

Vosicky usually stays out of politics and focuses on the job she loves, she said, but she finds that harder to do.

“I feel like we have this conversation every year,” she said. “And I just, I don’t get it. I just don’t understand how somebody can’t find an answer.”