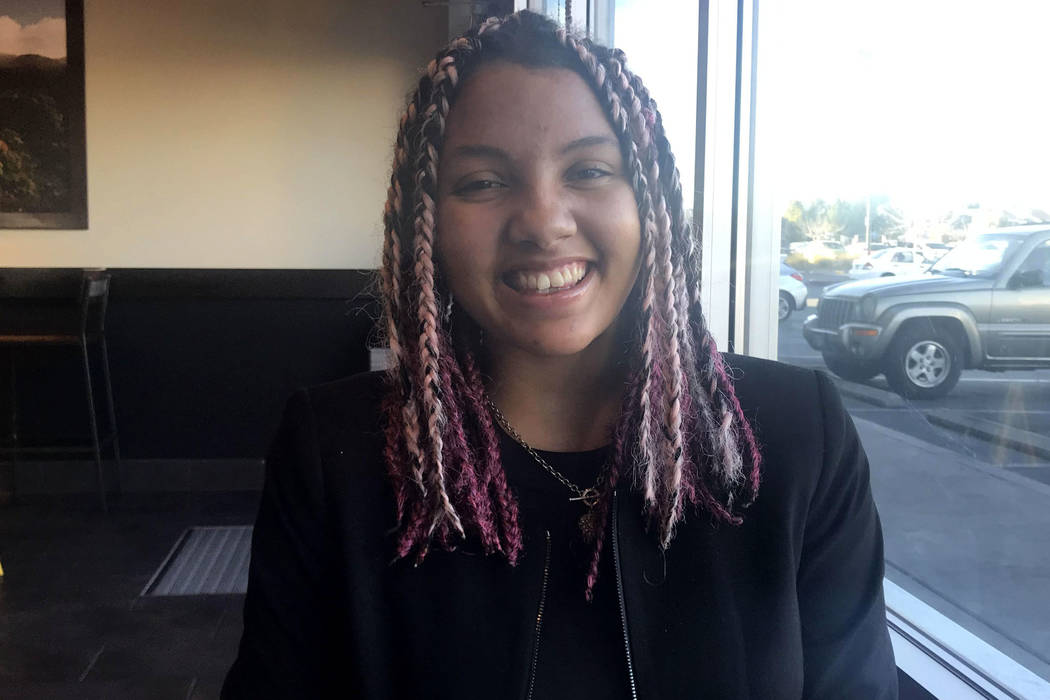 East Career and Technical Academy senior Jayla Scott persevered through a lot in life. Now, she has acceptances from a list of colleges. (Amelia Pak-Harvey/Las Vegas Review-Journal)

That’s when her mom was arrested, forcing Scott and her brothers to live with their father’s family. Stints in two separate foster homes followed. Her older brother became so angry and volatile during that period that she ended up taking the role of the older sibling.

Part of that anger, she recalls, stemmed from a sexual assault she and her older brother faced while in their second foster home.

“My mind was mostly on making sure my brothers were OK versus worrying about how I was feeling in the moment,” said Scott, now a 17-year-old senior at East Career and Technical Academy in southeast Las Vegas.

She could see one route out of the difficult hand life dealt her: education.

Like other high-achieving students I’ve interviewed, Scott had the wherewithal to look around at a young age and determine she wanted more out of life.

Her older brother is in jail on a robbery charge. Her father, who was addicted to narcotics, has never really been in her life. And although she and her siblings were reunited with their mother, Scott has had to navigate the college application process alone.

But it’s something she committed to at a young age. After her kindergarten graduation, she told her mother she would be a valedictorian.

That ambition has paid off.

Scott has received a full-ride scholarship to Stanford University and is awaiting word from other top-tier colleges, including Princeton and Johns Hopkins University.

She’s a shining example of how Clark County School District students can overcome the challenges they face — if they have the ambition and drive.

When people talk about fighting for public education, I like to think that students like Scott are who they’re fighting for.

In school she found solace, she said, because she wasn’t known as the poor kid from a bad neighborhood. She was the smart kid who was involved in a lot of activities.

“I could make a new name for myself,” she said. “I could be the person I always wanted to be.”

Her high school principal is her second mom, she said. Scott’s faith also helped her work through the anger and hurt from her past and maintain a positive disposition and ability to see the good in the world.

And now she’s setting a higher standard for her 14-year-old brother. Hearing him talk about his hopes of attending Oregon State or Villanova University make her happy.

“I’ve also set a different example for him than what he’s seen from everybody else in his life,” she said. “So I know he has a lot more hope than he probably did when he was younger.”

Scott’s also starting a campaign to advocate for sexual assault victims called Respect the No. Once in college, she hopes to study global politics and later go to medical school to become a trauma surgeon.

To other students struggling through adversity, she says this: Don’t be afraid to tell your story and ask for help.

“No matter how bad it may seem, there’s people around every corner who will give you a lending hand,” she said. “And also, just remember, you can do this. There’s nothing in this world you can’t do. So continue to pursue what you want to pursue.”