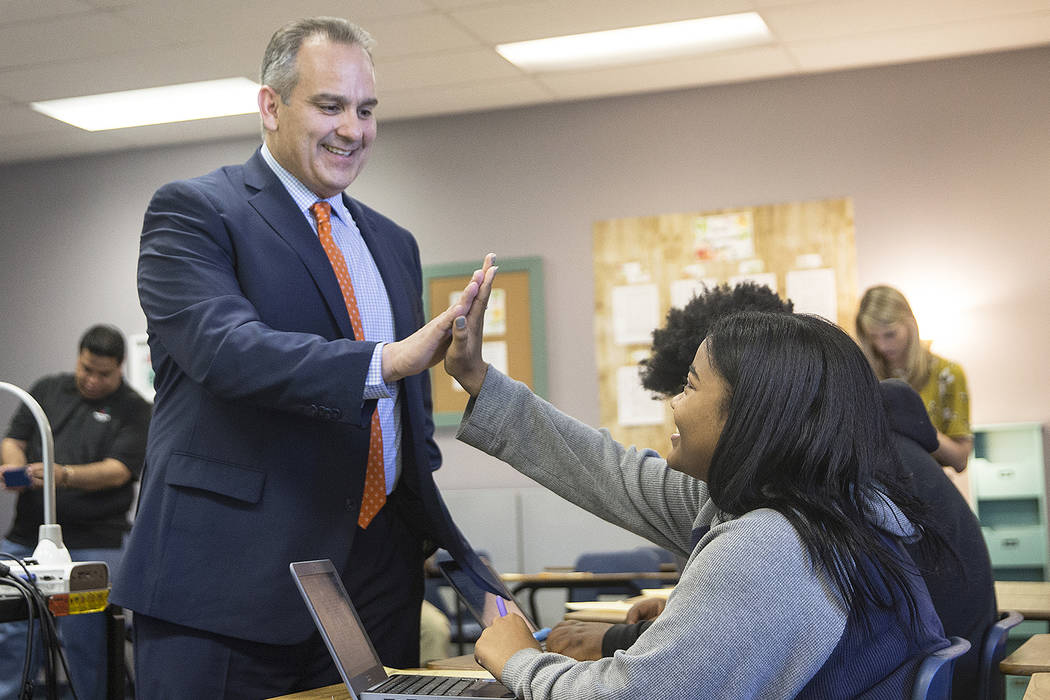 Let’s talk about the top.

The number of top administrative jobs in the Clark County School District is often used as an example of wasted money.

New Superintendent Jesus Jara pledged to comb through the organization to spot inefficiencies, but then he brought in two new higher-ups.

When a new superintendent shuffles the desks in the central office, it raises a question: Does the district need to reorganize or simply cut the fat?

After back-to-back budget deficits, the district’s six-figure earners are a sensitive topic among support staff who feel shortchanged and teachers who are fighting for salary raises.

Some examples: Kirsten Searer, chief communications, marketing and strategy officer, with a $144,360 salary; Joe Caruso, former special assistant to the superintendent and now executive director of community outreach, with salary and longevity pay of $126,420; and Kellie Ballard, director in the deputy superintendent’s office, with salary plus longevity pay of $114,936.

Nearly 370 employees, including many principals, earned a six-figure base pay in 2017, according to Transparent Nevada.

Jara said his new chief of staff — Jennifer Cupid-McCoy, who followed him from his previous Florida district — will examine ancillary departments and determine where there may be some “duplicated efforts.”

“We need to be lean and effective and strategic and intentional,” he said.

But his decision to hire Cupid-McCoy and a new deputy superintendent to replace retiring Kim Wooden struck a nerve with some trustees. The new chief of staff will make $8,388 more than Rick Neal, who held that position before becoming chief operating officer.

And new Deputy Superintendent Diane Gullett will start with a $160,692 salary — higher than the amount listed in Wooden’s 2016-2017 contract, although nearly equal to her latest salary and longevity pay of $161,492.

The job shuffle also makes me wonder if the district has been duplicating efforts all along.

Jara said his new deputy will have a greater role driving student achievement. For now, he said, he sees both the chief of staff and chief operating officer as necessities.

Some high-level positions resemble those of other large urban districts. New York City and Chicago schools, for example, list both a chief of staff and a chief operating officer.

State law also requires school associate superintendents to oversee up to 25 schools each.

The district argues it has fewer central office administrators for its size than Los Angeles, Miami and Charlotte. But try telling that to angry employees with low morale.

The larger question: Will the district lose or gain weight under Jara?

Jara says there’s opportunity to create efficiencies within departments. But even so, it wouldn’t have solved the recent deficit.

“I believe that there’s an opportunity for us to create efficiencies within departments to better serve our schools,” he said. “But when you look at our budget … these aren’t things that are going to get us $68 million.”