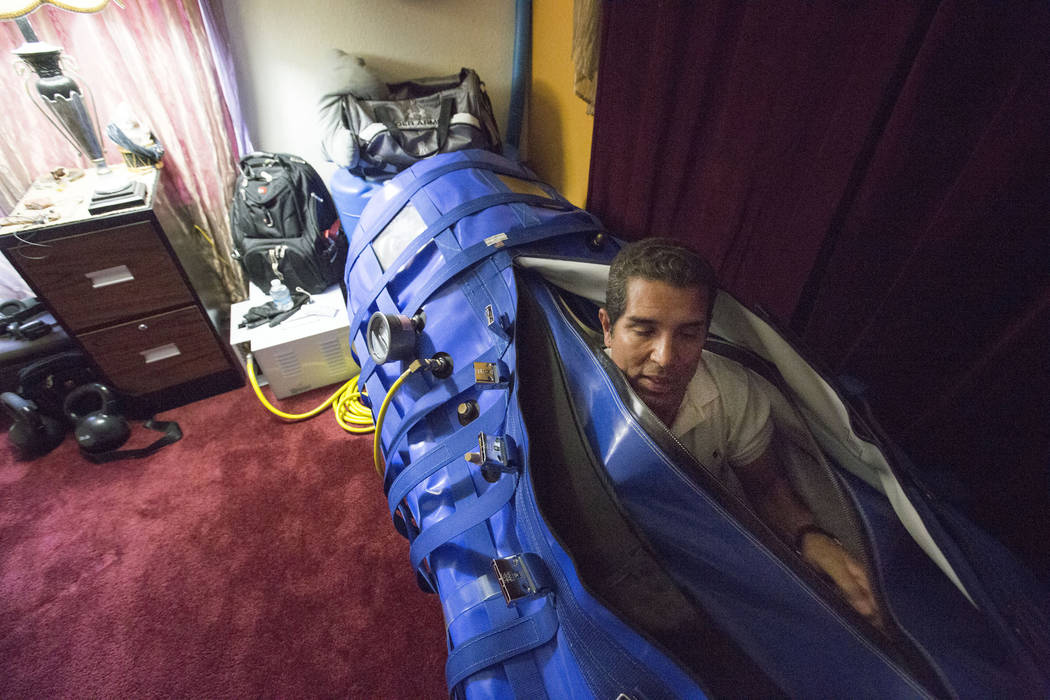 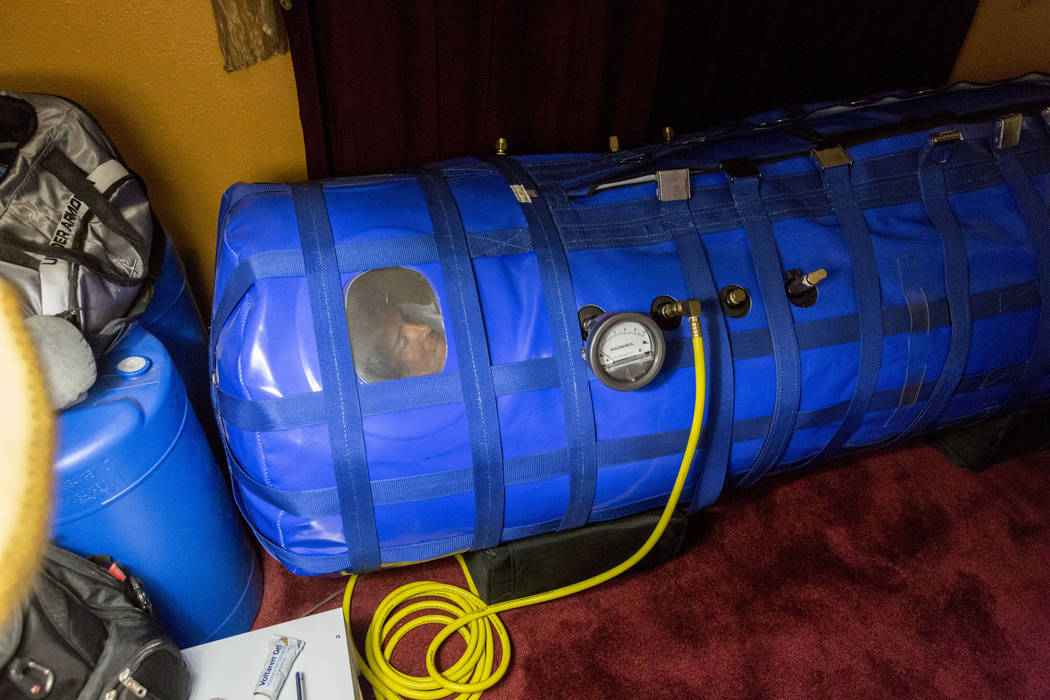 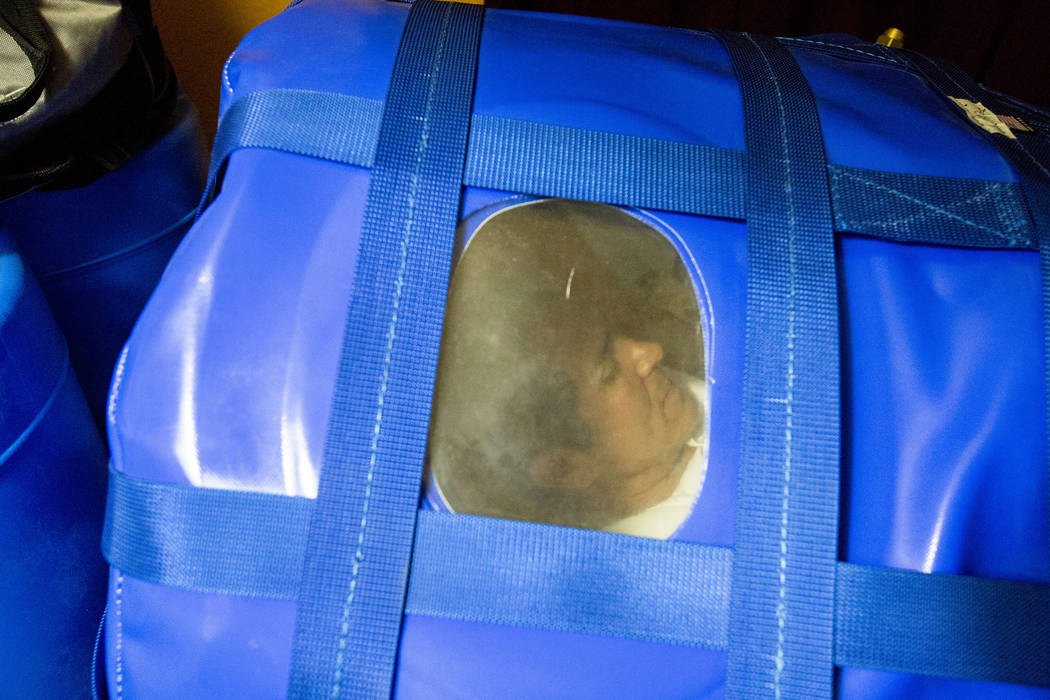 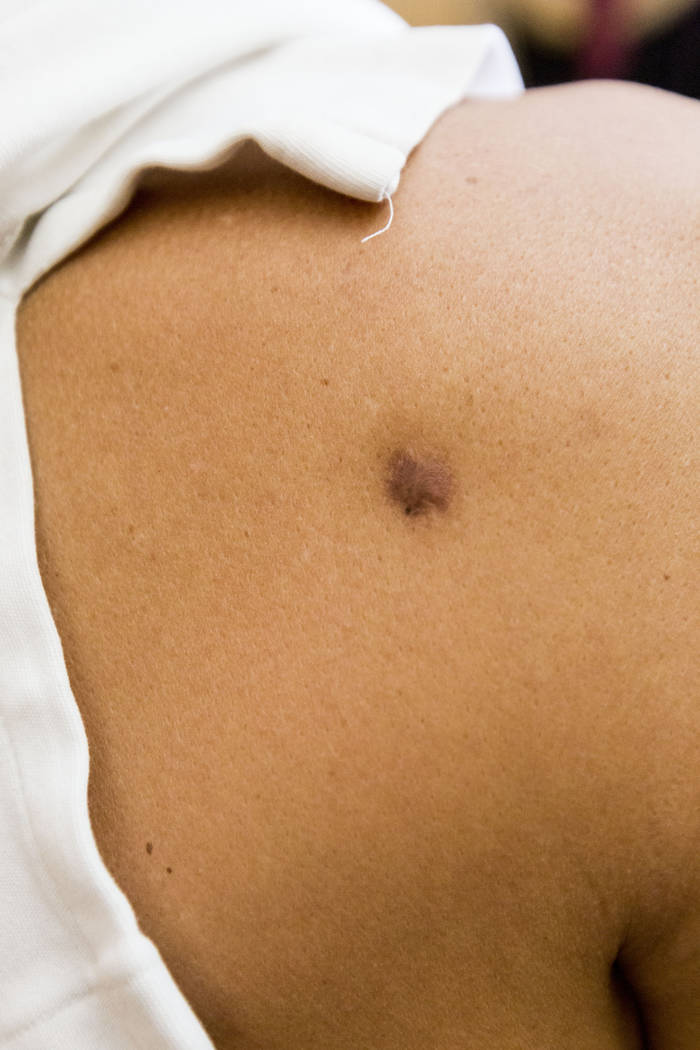 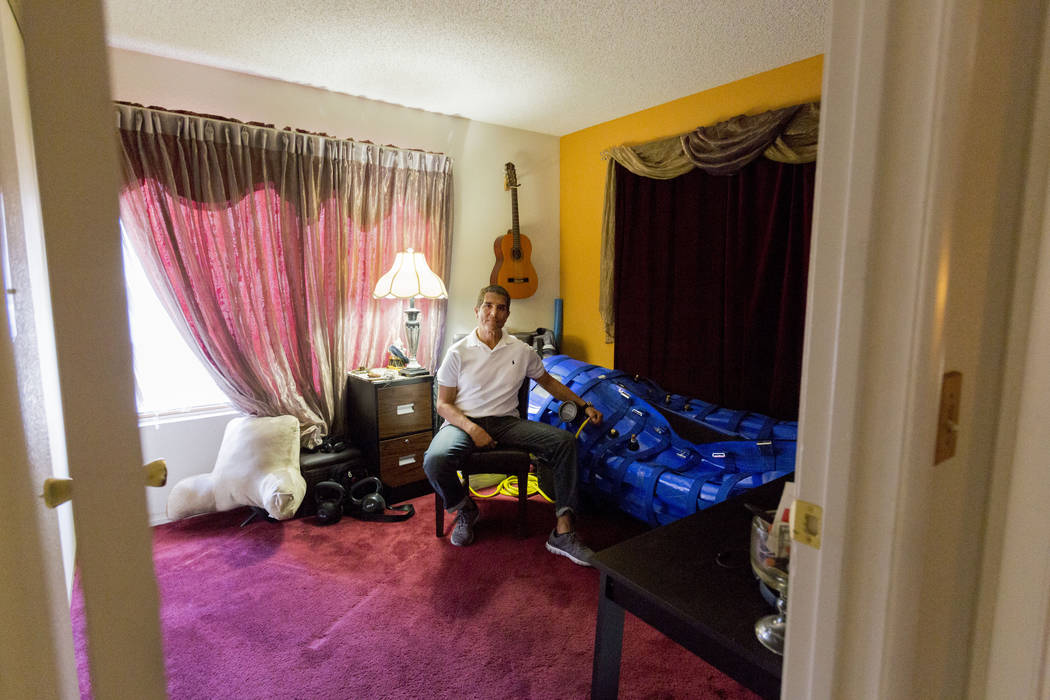 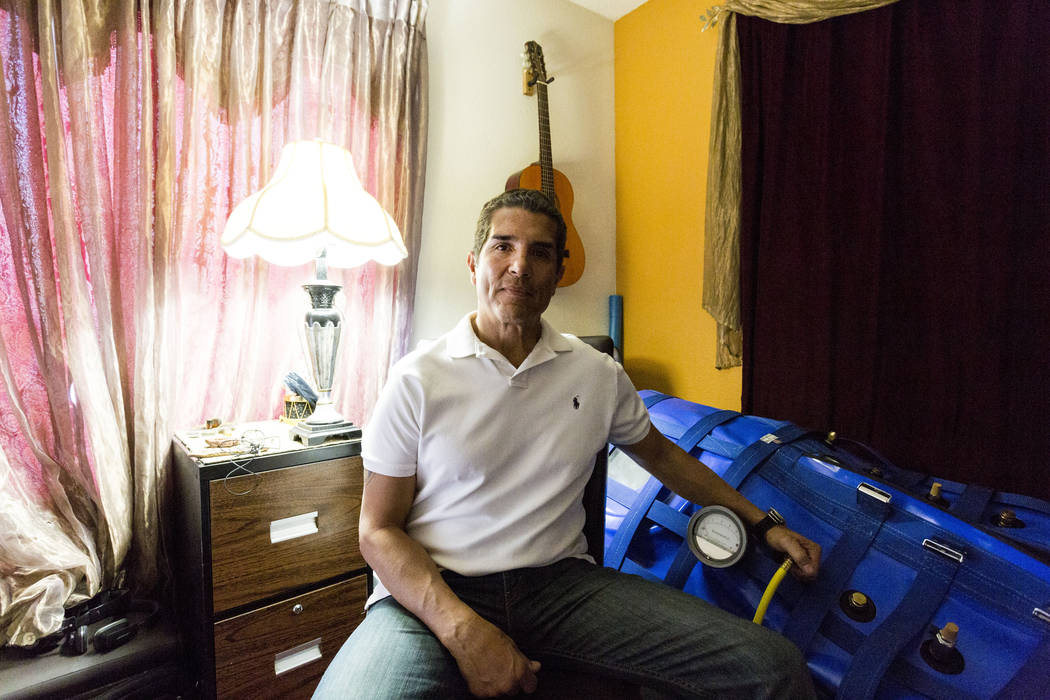 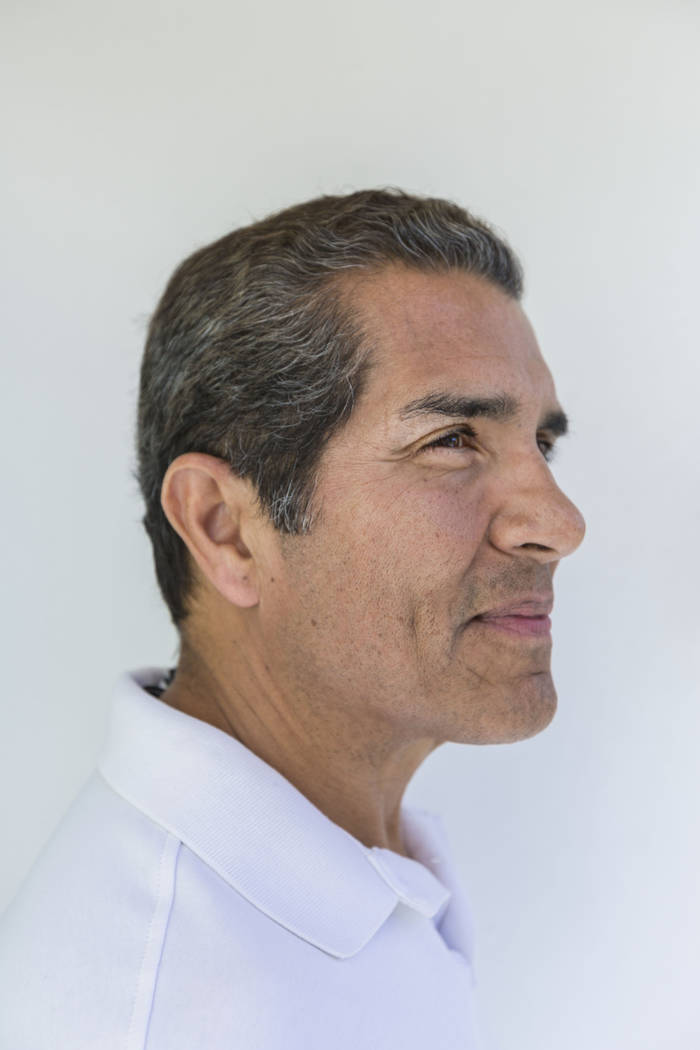 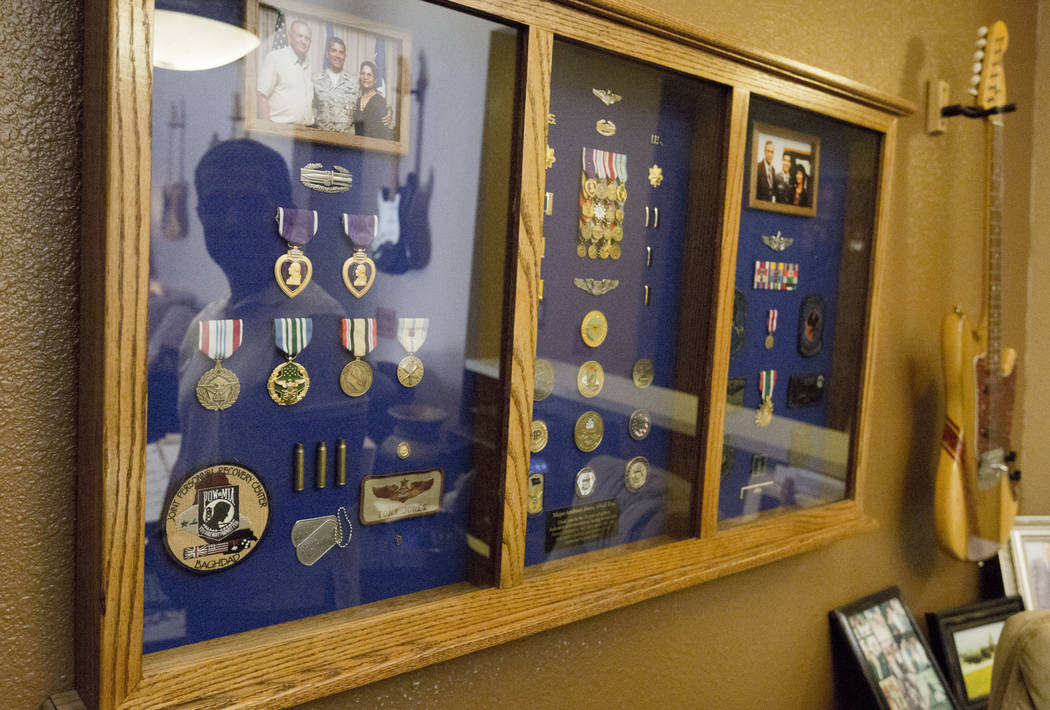 Author and former Air Force major Anthony Jones suffers from major brain injuries from Iraq, looks at his shadow box of medals and memorabilia from his time in service in his home in Las Vegas, Wednesday, April 19, 2017. Elizabeth Brumley Las Vegas Review-Journal @EliPagePhoto 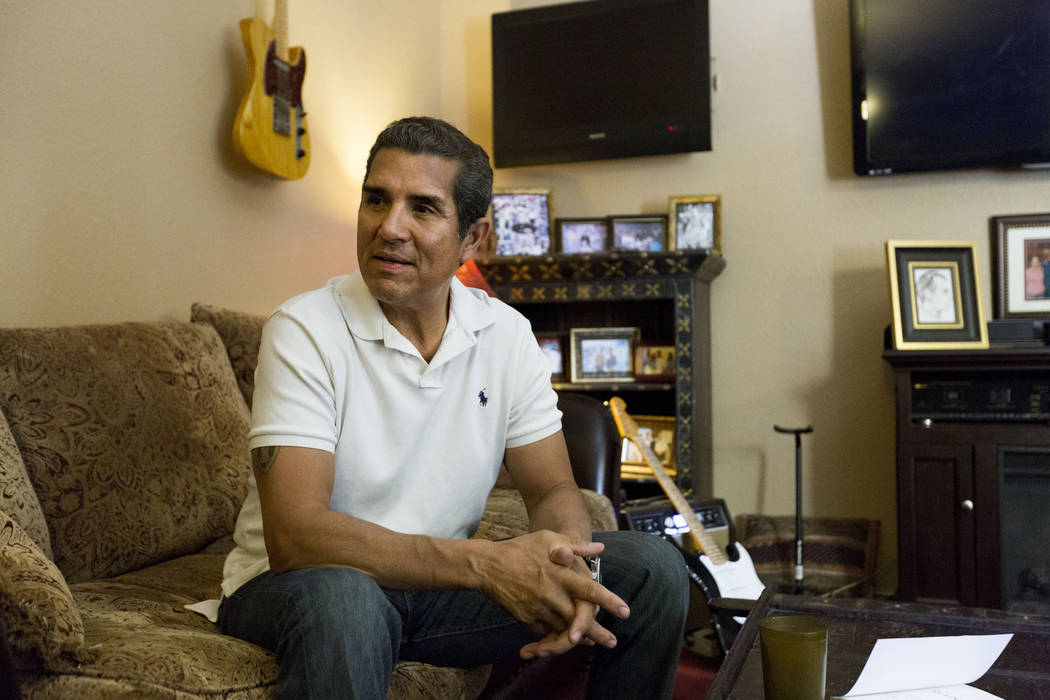 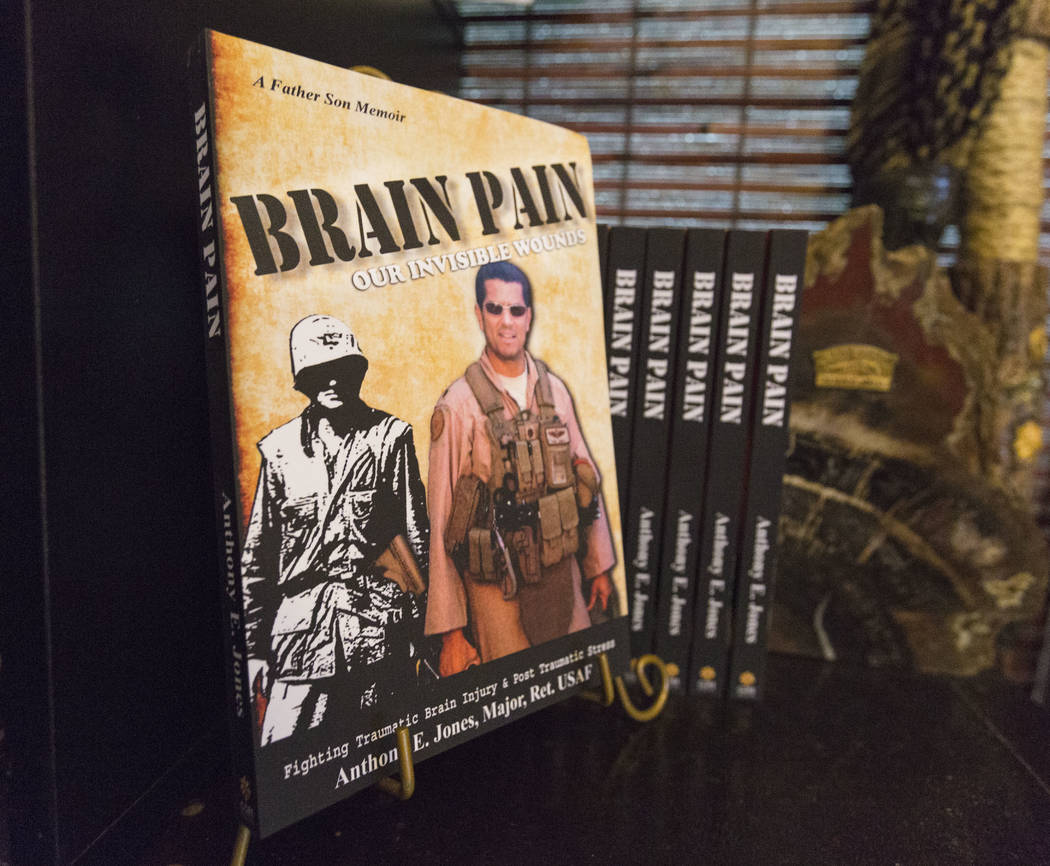 Anthony Jones, a 60-year-old retired Air Force major who served in Iraq, unzips the $20,000 portable hyperbaric oxygen chamber sitting in a spare bedroom of his Las Vegas condominium and climbs in.

Jones, who was diagnosed with a traumatic brain injury (TBI) and post traumatic stress (PTS) after surviving two major rocket attacks, says pure oxygen — about an hour, two or three times a week — helps him deal with the ongoing debilitating effects of his injuries.

Jones’ recently published book, “Brain Pain,” available at Amazon.com, details the mental health issues that he and his father, Walker Jones, who served in the Marine Corps in Vietnam, suffer as a result of their combat experience. A boomer himself, Jones says the research he did in writing “Brain Pain” can benefit other boomers, whether they’re veterans or not.

“You’ve got to be engaged for good brain health,” he says. “You must be busy, purposeful, do something. Exercise. Be aware of good nutrition. You must do the work to feel better.”

The rocket attacks shot shrapnel into his back and caused severe concussions. He received the Purple Heart medal as well as five other awards for rendering medical care to others while under fire.

Medically retired in 2010 — he’s considered 100 percent disabled — Jones now runs a small security firm. While he says some medication can be helpful for PTS and TBI, he says it’s important to take as few pills as possible to avoid side effects and addiction.

Boomers dealing with PTS and the effects of sports concussions need to keep that in mind, he says, and oxygen therapy can help, but he does add that anyone who’s considering such therapy should consult a physician who has studied it.

He cites a recent study of more than 1,000 brain-injured patients being treated with oxygen therapy where preliminary results show that everyone reported improvement. Jones also points out that former U.S. Army Gen. Pat Maney, also brain injured in Iraq, credits hyperbaric oxygen therapy for making it possible for him to return to work in Florida as a judge.

The therapy isn’t being immediately used on brain-injured veterans, he argues, because the federal government doesn’t want to spend the money.

Jones says he bought his own hyperbaric chamber after reading the research on its effectiveness with the brain-injured. Scientists say oxygen helps healing and regrowth of damage at the cellular level, particularly in the first year after injury.

“It’s definitely helped me,” Jones says, but none of his doctors ever mentioned it to him as a possible treatment.

“Upward of 70,000 (people with) known combat blast injuries as well as well as millions of civilians could be helped,” he says.

Though Jones concedes one Department of Defense study found hyperbaric units didn’t have a significant effect on post concussive symptoms, he says 10 times as many studies have found otherwise.

Noted researcher and board-certified hyperbaric and emergency medicine physician Paul Harch has said the federal government’s reluctance to use hyperbaric treatment for PTS and TBI comes down to money.

“They’re talking about units that cost from $200,000 to $1 million to be in hospitals and claiming it can cost $500,000 to treat one veteran,” Jones says. “But the portable ones like I have can do the job at little cost and can even be taken with combat units. The quicker we have people helped, the less permanent brain damage is done.”

Paul Harasim’s column runs Sunday and Tuesday in the Nevada section and Monday in the Health section. Contact him at pharasim@reviewjournal.com or 702-387-5273. Follow @paulharasim on Twitter.