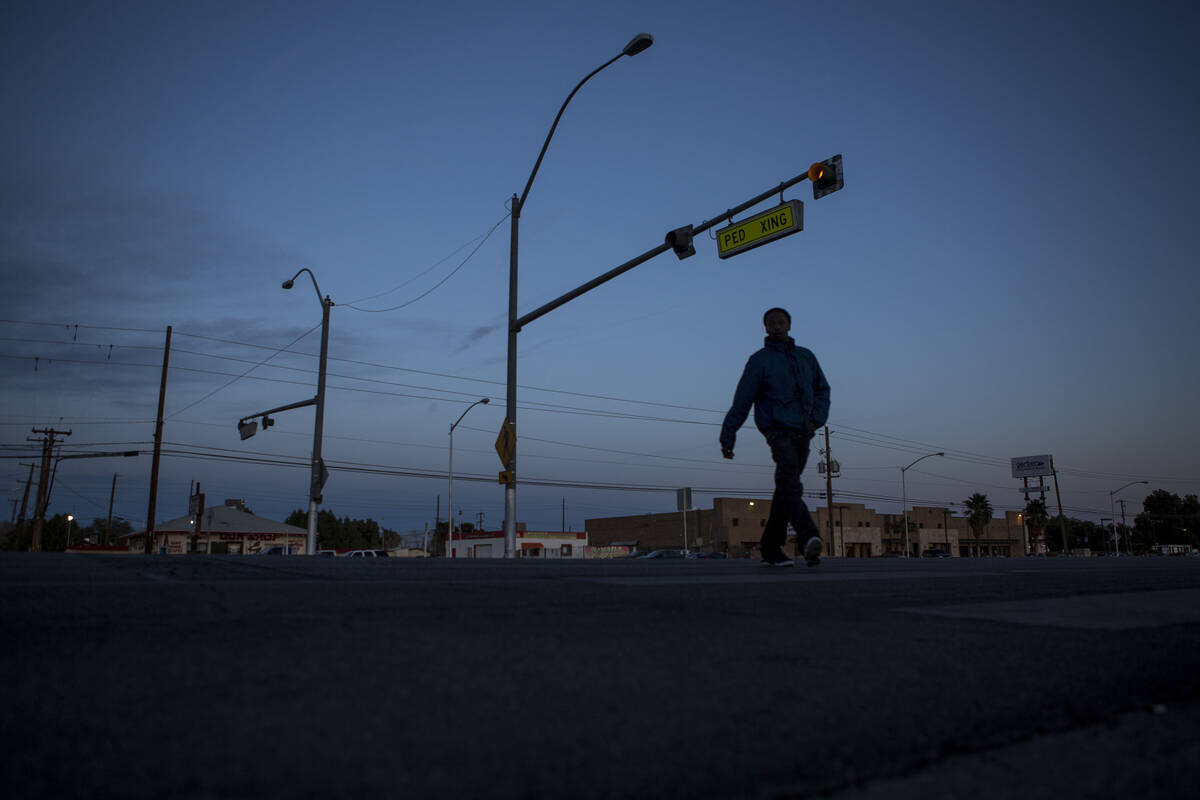 A pedestrian uses the crosswalk at the intersection of Whitney Avenue and Boulder Highway in Las Vegas on Wednesday, Jan. 24, 2018. (Patrick Connolly/Las Vegas Review-Journal) @PConnPie

The $130 million Henderson portion of the Reimagine Boulder Highway project is set to get underway early next year. Planners and engineers will use 2023 to complete the final design before work begins.

“We are going full speed ahead,” said Scott Jarvis, city of Henderson project engineer. “We’ll continue to reach out to neighbors and business to keep everybody informed with what’s going on and do all of our required permitting and we’ll be under construction in early 2024.”

Construction will take between 18 and 24 months to complete when started next year, Jarvis said.

The section of Boulder Highway included in Henderson’s jurisdiction is 7½ mile long, spanning between Wagon Wheel Drive and just past Gibson Road at Tulip Falls Drive.

The Reimagine Boulder Highway project is set to transform a 15 mile-stretch of the highway.

“We are adding additional safety enhancements for pedestrians and for bicyclists,” Jarvis said. “Part of the symbiotic relationship that will also increase the safety for the cars.”

Center-running bus lanes will be added and buffered bike lanes are also included.

“We’re adding dedicated lanes in the center median,” Jarvis said. “That does phenomenal things. It increases safety, it really helps with congestion and removes the buses from the travel lanes. So the buses and the cars don’t intermix.”

Along with drainage improvements also planned to address flooding issues in the area.

When constructed in 1931 as part of the construction of Hoover Dam, Boulder Highway was a largely rural area. Formerly,the highway was the area’s only freeway, carrying state Route 5, and later U.S. Highways 93, 95 and 466 near Boulder City, through Henderson and into downtown Las Vegas.

The area has expanded rapidly since, with now 20,000 homes, apartments and condominiums and over 970 commercial lots within a half-mile radius of Boulder Highway. The stretch of road sees 36,000 vehicles and 10,000 RTC transit riders daily.

While the project is aimed at increasing safety and traffic flow to better suit the area as it is now, there is hope the layout will attract new businesses.

“This is really a catalyst for change and a catalyst for growth,” Jarvis said. “The reconstruction of the corridor and the repurposing of it is giving opportunities for adjacent development and redevelopment. The investment being put forward by the city will pay back huge value in the usability and the attractiveness of this corridor.”

There are ongoing meetings with current and potential stakeholders regarding the opportunities along Boulder Highway in Henderson.

“There are multiple parties coming in to develop the corridor,” Jarvis said.

After the Nevada Department of Transportation transfered ownership of the stretch to Henderson, that removed some of the right out way limits put on business. This will allow new development to be built closure to the road.

At some point following the completion of the project, the roadway could go from being Boulder Highway to Boulder Parkway or another name to better reflect the new layout.

There’s still plenty of design work and the environmental assessment left to do on the 7½ miles that runs through Clark County and the city of Las Vegas jurisdiction.

The Regional Transportation Commission of Southern Nevada, Clark County and Las Vegas officials are working toward the northern half of the project. They are waiting on grants from the U.S. Department of Transportation to be awarded, that would go toward funding the project.

The remaining steps before any construction could get underway on the northern half of Boulder Highway is about half a decade away, if funding is awarded in early 2023, according Andrew Kjellman, Regional Transportation Commission of Southern Nevada Director of Planning. The projected cost of the project is still to be determined.

If that funding is awarded the next step is the conducting of the environmental, study and preliminary engineering for the northern half of the work.

What will be done where the new layout of the Henderson portion meets the current version after Tulip Falls is yet to be determined.

“We don’t know what that interface will look like right now,” Kjellman said. “That’s we’re moving forward as possible to get work started on the northern part of the corridor.”

Following those two portions of the project’s planning the final design phase will begin, which will take another two years to complete.

From there construction will get underway which will take the total timeline to about seven years in total, if all the required funding is awarded when expected.

“We think it’s about a two-year construction project,” Kjellman said. “That would start once the final design is done. There’s a lot of critical points in that seven-year timeline. Funding has to happen at every step of the way and we don’t find anything in the environmental or preliminary engineering or right-of-way (acquisition).”