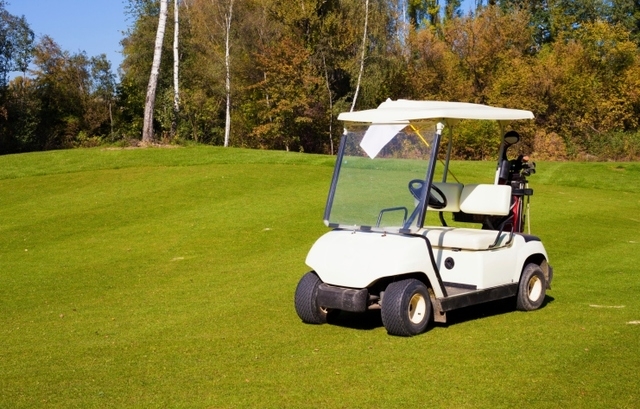 Most of them are nimble and quick with a tight turning radius. The electric ones have a quiet takeoff, just like a Prius.

Even when you floor the accelerator, a golf cart won’t go too fast, usually topping out at about 15 mph. But it sure is fun to go full-throttle over the rolling hills of golf course fairways and cart paths.

It’s easy to see why golf carts are a popular transportation option for some people, and that leads us to Warrior Reader Jacqueline’s question:

“Are golf carts allowed on main roads? I see them on Flamingo Road and Hualapai Way going to or from Siena. Last I knew, this area isn’t a golf community.”

It sounds as if Jacqueline is a little annoyed with those fun-loving golf cart drivers. But she’s right — they don’t belong on Flamingo or Hualapai.

Loy Hixon of the Nevada Highway Patrol pointed me to the Nevada Revised Statutes that address golf carts, defined in the law as a “low-speed vehicle.”

A low-speed vehicle is any motor vehicle with four wheels that weighs less than 3,000 pounds and travels slower than 25 mph. It also has to comply with Federal Motor Safety Standards, meaning it has to have headlights, taillights and brake lights and be registered with the Department of Motor Vehicles.

But then, there’s the golf cart community designation. Those communities have different standards set by homeowners’ associations.

Local real estate experts say there are 13 golf cart communities in Southern Nevada. According to a list posted by Universal Realty, the Siena Golf Village isn’t one of them.

I called the Siena Community Center homeowners’ association to ask whether golf carts are allowed on village streets. Based on the response I received, it’s easy to understand why Jacqueline couldn’t get an answer to her inquiry.

After several unreturned phone calls to Siena’s community standards committee, an individual at the community center instructed me to write a letter (there’s no email address) to the association’s board. When the board meets, it will decide what it wants to say about golf carts.

Nobody at the community center knew when the association would next meet.

PreCheck is a trusted traveler program for frequent fliers who get a separate, quicker security line and don’t have to take off their shoes, belts and outerwear, remove laptop computers from their bags or display their bag of liquid toiletries.

Ten airlines participate in the program at McCarran. Travelers can enroll for $85 for five years, but the TSA also randomly chooses flights and designates passengers for the PreCheck line daily. That’s how Chris was selected.

“When I downloaded my boarding pass, it said I was eligible for PreCheck. But when I went to the airport on the day of my flight, the TSA agents said there was no PreCheck line. What gives?”

Turns out that Chris got caught in a situation specific to Southwest. Most of its flights depart from the C gates. But roughly 30 flights a day leave from the B gates. Frequent Southwest fliers know they have to check that before heading to the gate.

Lorie Dankers, a TSA spokeswoman, said Chris’ flight left from the B gates, where there’s no PreCheck line.

There is a way for passengers flying Southwest from the B gates that hate taking their shoes off or want the speedier PreCheck line to do it. Unfortunately, the PreCheck time savings would be offset by having to walk farther to get to the plane.

Dankers said a PreCheck line exists at the C gates and at the C gate annex upstairs from Southwest’s ticket counter.

Several years ago, McCarran built a bridge and corridor linking the B and C gates. That was done to facilitate the expansion of Southwest and America West so that both airlines could use either sets of gates. Connecting passengers could go to their planes without having to leave and re-enter the secure area.

America West and its McCarran night hub are long gone, but Southwest passengers still use the corridor on connecting flights.

It can also be used on local departures for those wanting to use PreCheck.

Questions and comments should be sent to roadwarrior@reviewjournal.com. Please include your phone number. Follow the Road Warrior on Twitter @RJroadwarrior.