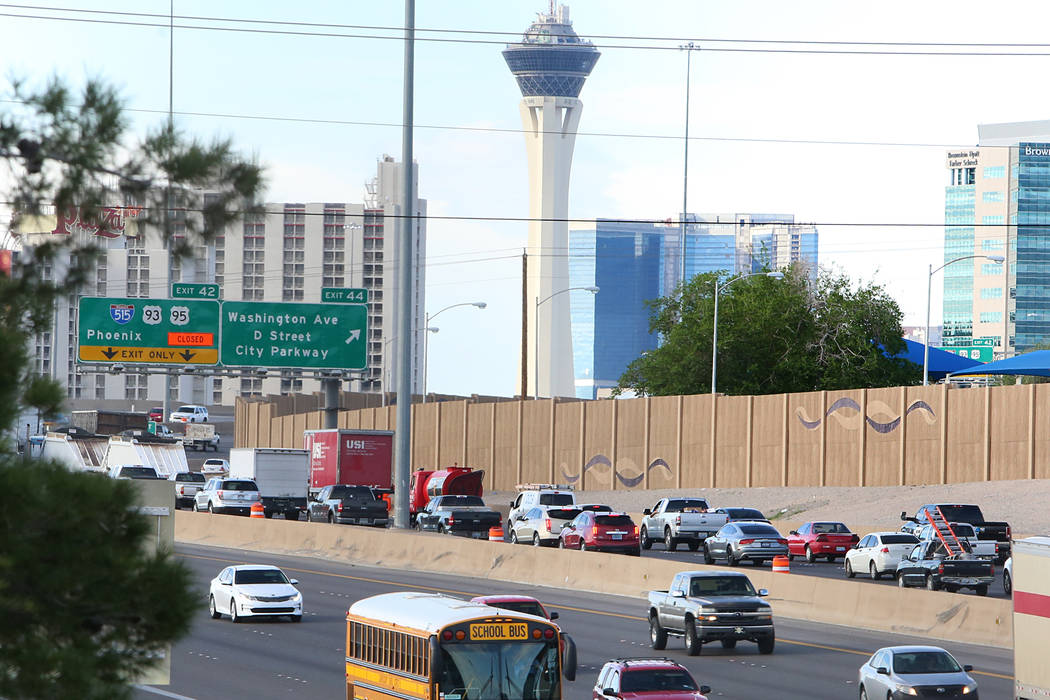 Heavy traffic during the first morning of the "Big Squeeze" along Interstate 15 South at the Spaghetti Bowl in Las Vegas on Tuesday, March 21, 2017. (Bizuayehu Tesfaye/Las Vegas Review-Journal) @bizutesfaye

The “Big Squeeze” is going to make a big shift Thursday.

Northbound U.S. Highway 95 will still be narrowed to two travel lanes between Interstate 15 and Rancho Drive, but traffic will slide over to the right side of the freeway from 6 a.m. Thursday to mid-September, Nevada Department of Transportation spokesman Tony Illia said.

Downtown Las Vegas commuters might be happy to know that the southbound lanes will remain in the current configuration — at least for now.

“It’s going to be a pretty dramatic shift because drivers have been traveling that stretch since the “Big Squeeze” restrictions began in March,” Illia said.

The move allows crews to start splitting the northbound and southbound lanes by roughly 70 feet, Illia said. The extra space is needed to build an 81-foot-tall flyover ramp for high-occupancy vehicles.

The two-way concrete ramp will be accessible from the center lane of both freeways. It will be 2,606 feet long — the equivalent of seven football fields laid end to end, or double the width of the lake in front of Bellagio, Illia said.

Crews will also repave one mile of U.S. 95 that was last resurfaced in 1992 — back when the Toronto Blue Jays won their first World Series, Michael Jordan was still king of the NBA and “The Real World” premiered on MTV.

The “Big Squeeze” restrictions are part of Project Neon, a $1 billion effort to redesign and add traffic lanes along I-15 from the U.S. 95 interchange to Sahara Avenue by July 2019.

About 35 percent of the construction associated with Project Neon is completed, with $200 million spent so far, Illia said.

Likewise, Desiree from Las Vegas wanted to know whether Clark County officials were planning for a flashing yellow arrow for the signals at Buffalo Drive and Peace Way, also in the southwest area.

County spokesman Dan Kulin said there are no plans for the enhanced signals at either location.

Different agencies have their own criteria for deciding whether to use flashing yellow arrows at intersections, including the number of vehicles turning left at a given time, crash history and the number of traffic lanes, said Kelley Waynert, a spokeswoman for the Regional Transportation Commission of Southern Nevada.

Additionally, Waynert noted that flashing yellow arrows are not allowed if there are two or more left-turn lanes at an intersection, or if the posted speed limit is 45 mph or greater.

Those of you wanting to request a flashing yellow arrow should call the RTC at 702-455-6000 or send an email to intheworks@clarclountynv.gov.

Andrew from Las Vegas said he’s tired of driving on the cracked, uneven pavement along Fort Apache Road between Warm Springs Road and Huntington Cove Parkway, and he wanted to know when it will be fixed.

There are plans to widen and repave this part of Fort Apache, but you’re not going to see any improvements for a couple more years, Kulin said. Meanwhile, the county will take a look to see if potholes need to be filled, or if other temporary fixes can be made.

Steve from Las Vegas asked that the city install a protected left-turn signal at Decatur Boulevard and Smoke Ranch Road.

“Nearly all the other lights on Smoke Ranch, between North Fifth Street and Buffalo Drive, have proper lights for left turns,” Steve wrote in an email to the Road Warrior.

City officials did a traffic count at this intersection two years ago and found that it did not meet the minimum criteria for a left-turn signal, Las Vegas city spokeswoman Margaret Kurtz said.

Kurtz said Steve’s letter prompted the city’s traffic engineer to schedule another traffic count and re-examine whether a left-turn signal should be installed.