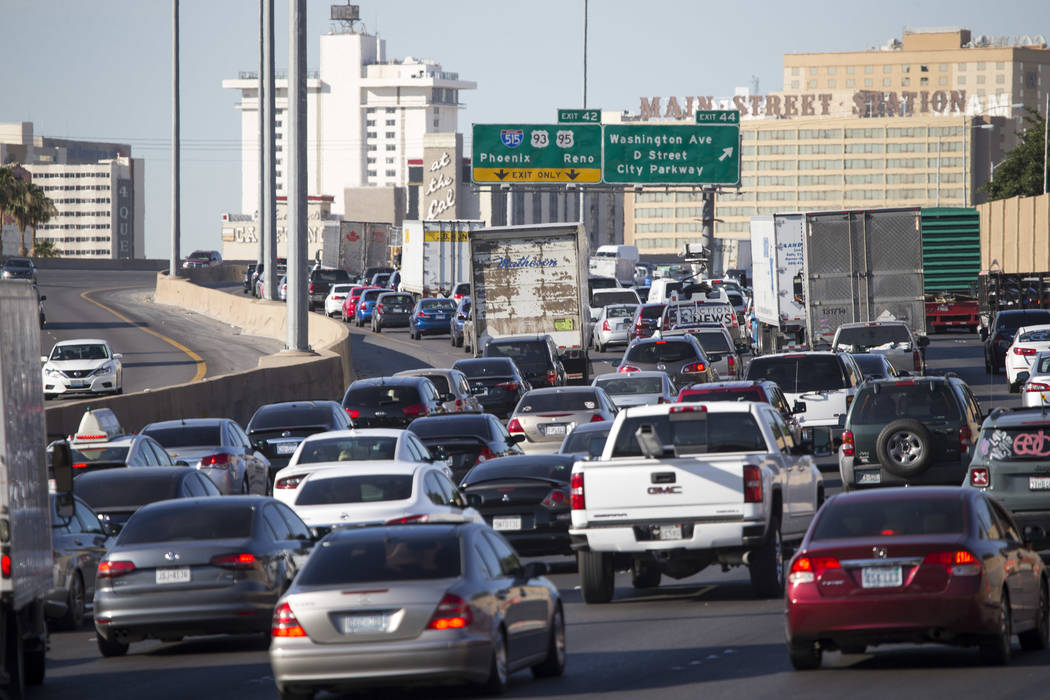 Driving around Las Vegas will dramatically change over the next two years.

Rather than express lanes, motorists will be able to access carpool lanes along Interstate 15. And, giant, dynamic digital screens will tell us how fast to drive and warn of potential traffic snarls.

The improvements are part of the $1 billion Project Neon, which calls for widening the Spaghetti Bowl freeway interchange of I-15 and U.S. Highway 95 by 2019. Just a year into construction, Project Neon is about 40 percent complete.

David from Las Vegas said he noticed crews installing some of the electronic signs near downtown, and wanted to know when the black screens will start flashing displaying information.

The first full-color digital sign along northbound U.S. 95 will go online sometime in October, warning commuters to slow down as they approach ongoing construction through the Spaghetti Bowl, said Tony Illia, a spokesman for the Nevada Department of Transportation.

By the end of the year, five more Active Traffic Management signs will be operating along U.S. 95, along with three signs on I-15 as a way to help reduce accidents and stop-and-go traffic for the 300,000 vehicles that travel daily through Nevada’s busiest freeway interchange.

The system boasts a system of sensors lining the freeway that will detect heavy congestion, car crashes, bad weather and other conditions that could impact traffic. That real-time information is immediately relayed to digital signs that will lower the speed limit.

Joel from Las Vegas wanted to know the purpose of the two express lanes running along both directions of I-15 between Sahara Avenue and Silverado Ranch Boulevard, and when to expect the conversion to carpool lanes.

For now, drivers can use the express lanes as the vehicle’s sole occupant, but may enter only at designated areas. Crossing the double white lines can land you a minimum $190 fine, even as NDOT plans to move away from the express lane system.

By time work wraps up on Project Neon two years from now, the express lanes will be converted into one general travel lane and one carpool lane in each direction, Illia said. The move will create 22 consecutive miles of carpool lanes between I-15 and U.S. 95, requiring at least two people per vehicle.

The two-way concrete ramp, measuring a half-mile long, will be accessible from the center lane of both freeways.

“Carpooling reduces commute times with higher travel speeds and fewer delays,” Illia said. “There is also less cutting in and out of traffic for a safer, less stressful drive.”

Until those changes come, commuters can still expect many more lane restrictions and ramp closures around the Spaghetti Bowl until construction concludes.

Henry from Las Vegas noticed that a median was removed at the northwest corner of Martin Luther King Boulevard and Alta Drive, just two years after it was built.

This median was installed about two years ago for $3.6 million to improve traffic safety, but Las Vegas city officials knew all along that it would eventually be removed by NDOT to accommodate the widening of Interstate 15 as part of Project Neon.

As a result, the city used lower-cost materials and did not place any landscaping along the median, Las Vegas city spokeswoman Margaret Kurtz said.

“Because Project Neon was expected to be a four-year project, and at the time the design-build team was not selected yet, we did not know how long this median would last,” Kurtz said.

The construction company that was hired to complete Project Neon accelerated work to a three-year timeline, and Kurtz said that this intersection was scheduled for improvements during an early phase.

“We did our best to coordinate and minimize costs on the safety median,” Kurtz said.

Rick from Las Vegas wanted to know whether additional auxiliary lanes will be added to Summerlin Parkway, similar to a project completed on the westbound lanes between Durango Drive and Rampart Boulevard.

The next round of improvements are expected to begin by the end of this year, including auxiliary lanes that will give motorists additional time to merge on or off the parkway, Kurtz said.