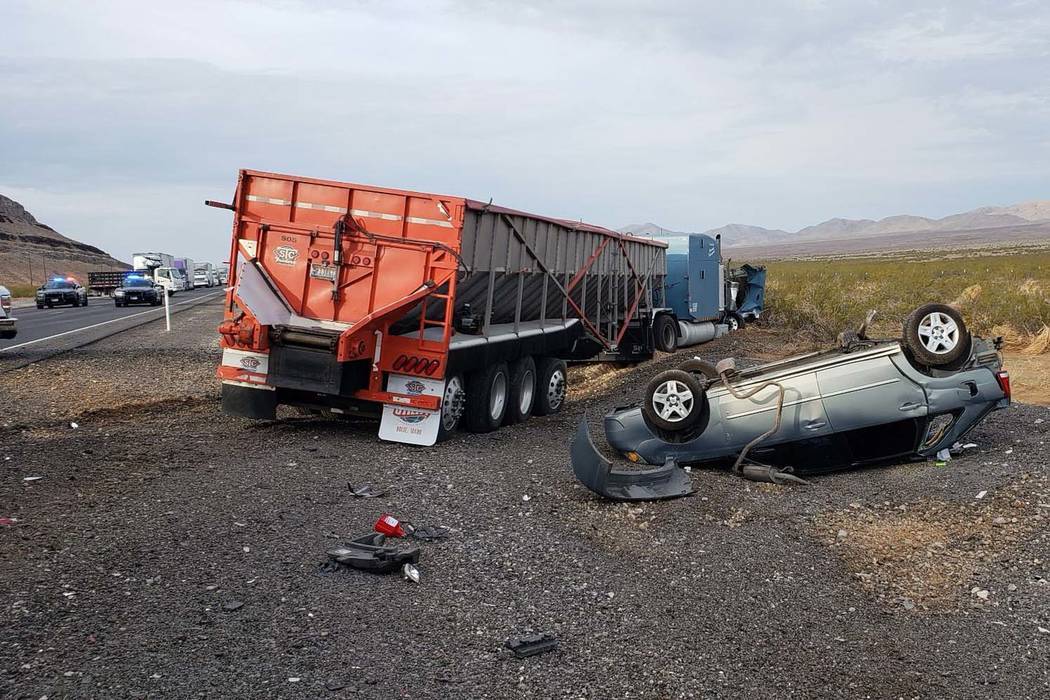 Drowsy driving can be just as dangerous as drunk driving.

Getting plenty of rest before a long trip is a vital step to keep motorists from nodding off behind the wheel and potentially causing a crash.

“Sleep is the only true preventative measure against the risks of drowsy driving,” said Tony Illia, a spokesman for the Nevada Department of Transportation.

Drowsy drivers caused more than 4,121 crashes between 2011 and 2015, with nearly half of those fatigued drivers closing their eyes between 9 p.m. and 6 a.m, according to the National Highway Traffic Safety Administration.

The results are sometimes deadly, like when a dozing truck driver plowed into four vehicles stopped at a construction zone along U.S. Highway 93 roughly 50 miles north of Las Vegas on July 18.

Two men from Idaho were killed in the crash, while two other drivers were treated at a hospital for minor injuries. The semi-trailer driver admitted to investigators that he was asleep at the wheel and woke up seconds before the accident, according to the Nevada Highway Patrol.

Along with getting seven to eight hours of sleep each night, drivers should avoid drinking or taking any medications before hitting the road, Illia said. Coffee and energy drinks might give you a temporary boost in alertness, but motorists usually become even more fatigued after the sugar and caffeine highs wear off.

If the eyelids start getting heavy, drivers should pull over and take a 20-minute nap in a lighted area or a designated rest stop, Illia said.

NDOT also does its part to keep drivers alert — particularly in rural areas — by embedding rumble strips in the pavement. The tool creates an audible vibration through the wheels and into the interior of vehicles driven by sleepy motorists who might be drifting off the road.

Additionally, wrong-way signs equipped with flashing red lights will be installed at a handful of freeway exits, including the new Kyle Canyon Road interchange at U.S. Highway 95 in the northwest valley and also the Starr Avenue interchange at Interstate 15 in the south valley, Illia said.

Michael wanted to know why he’s seeing so many defective plates, and whether the Department of Motor Vehicles was aware of the problem.

However, they aren’t being replaced immediately because of a backlog of nearly 720,000 sets of plates that were up to 15 years old, Malone said.

The DMV gave itself about three years to pare down that backlog.

“We are now in the third year of replacing older plates,” Malone said.

“We expect to have all of the faded plates replaced by this time next year.”

As a way to make sure pedestrians safely cross the street, Gary from Henderson suggested that four-way stop lights be implemented at most intersections.

Known as a “pedestrian scramble,” the move would force all vehicles to stop so that people cross the intersection all at once.

These scrambles are typically used at intersections with high volumes of pedestrian traffic, but there are some advantages and disadvantages to this model, said Catherine Lu, a spokeswoman for the Regional Transportation Commission of Southern Nevada.

“In some instances, it could decrease safety for both pedestrians and drivers, who may disobey the signals due to longer wait times for the overall traffic cycle.”

County spokesman Dan Kulin said there are no plans to install flashing yellow arrow signals because of the high speeds and large traffic volumes at these intersections.

Mark from Las Vegas said he dodges potholes nearly every day during his commute on the southbound 215 Beltway, specifically between Town Center Drive and Decatur Boulevard in the southwest valley.