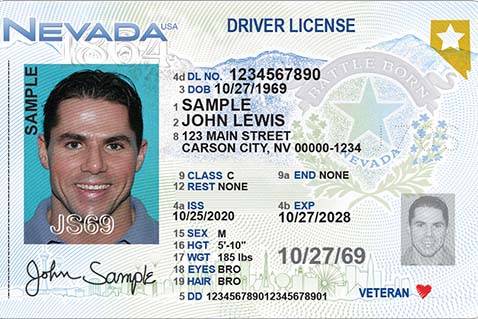 The Nevada Department of Motor Vehicles will roll out a new driver’s license design Monday. The occasion will mark the first overhaul of the design since 2008, although modifications were made to that design in 2014. (Courtesy: Nevada DMV)

The Nevada Department of Motor Vehicles will roll out a new license design Monday. This will mark the first overhaul of the design since 2008, although modifications were made in 2014.

The new design is being introduced in phases at the state’s 18 DMV offices, which will all have the new licenses available by the end of August, the DMV announced Friday.

“Our new licenses and ID cards are sleek and modern but still pay homage to Nevada’s heritage,” DMV director Julie Butler said in a statement. “They also have enhanced security features that help protect Nevadans against identity theft and aid our law enforcement agencies.”

The card production fee will remain $3.25, according to Kevin Malone, DMV spokesman.

Nevada’s “Battle Born” insignia is featured prominently on the front of the license in addition to the year of statehood, 1864.

The design pays homage to both the north and south of Nevada. The front of the card features the Las Vegas skyline at the bottom with mountains at the top, while the back of the card depicts Carson City and the Sierra Nevada and the playa in the Black Rock Desert.

Additionally, the federal Real ID marker has been changed from a gold circle to the outline of Nevada.

The new license features a bevy of security features including a laser-engraved ghost image repeated from the holder’s photograph and a laser etching of the card holder’s initials and year of birth over the top of their photograph.

The date of birth is restated in larger type with a raised feel, with the card’s background featuring a guilloche security design with waves and patterns printed in very fine lines that are not able to be scanned and are tough to replicate.

High-resolution printing with the colors fading from blue to green and back to blue across the face of the card are featured in the background.

There are other new security features on the license beyond those noted on the sample images.

“We have reached out to law enforcement across the state to let them know what to look for,” Malone said.

The Sahara office in Las Vegas will be the first to offer the new design Monday, with the Reno office beginning to issue it on Wednesday. DMV online services will convert to the new cards by Aug. 1. All other DMV offices will issue the update by Sept. 1. All cards will continue to be mailed to customers.

Existing driver’s licenses are valid until their expiration date, so officials advise residents not to rush to their local office just to get the new design.

“Anyone who wants just the new card should order a duplicate online rather than visit a DMV office,” Malone said.