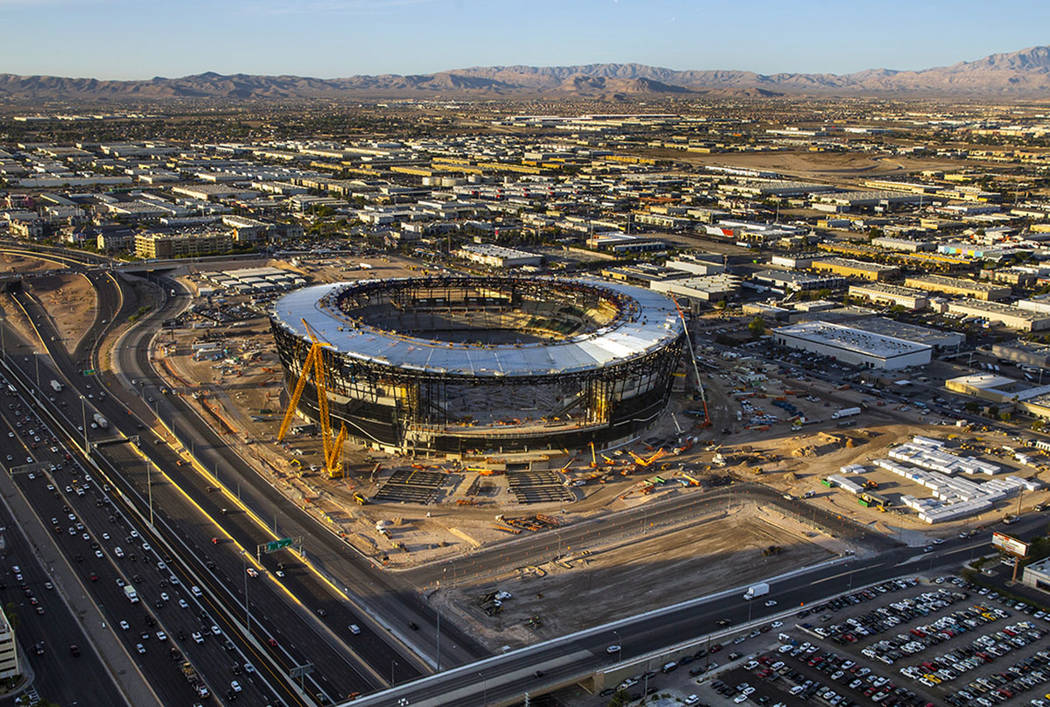 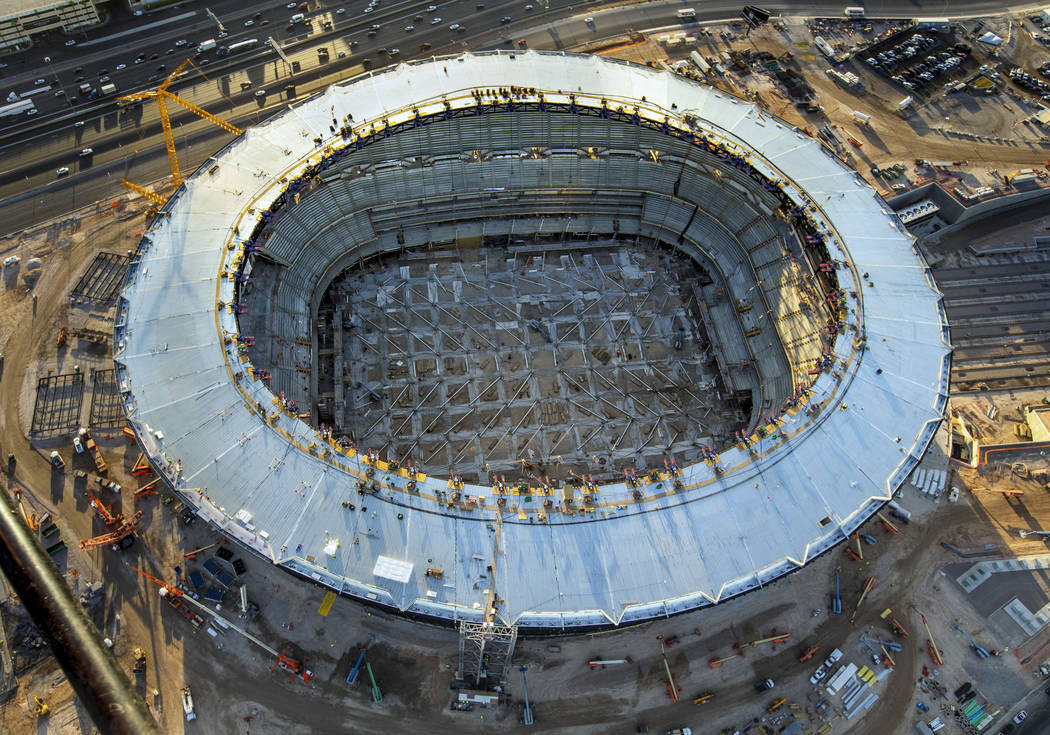 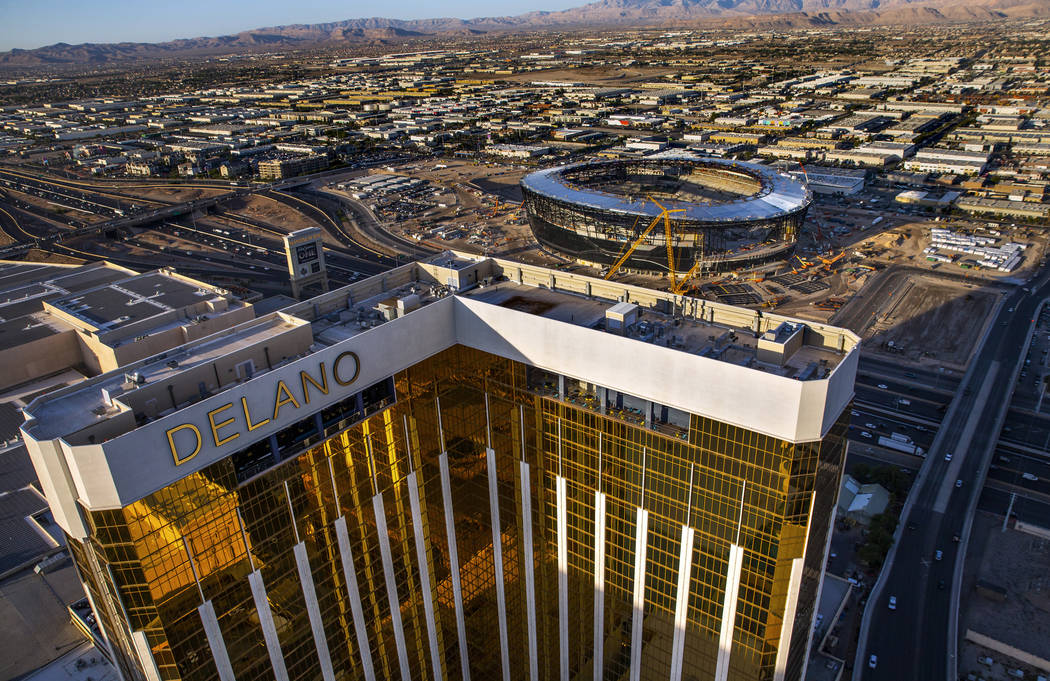 The Delano, near, and the Raiders Allegiant Stadium construction site, above, on Wednesday, Oct. 16, 2019, in Las Vegas. (L.E. Baskow/Las Vegas Review-Journal) @Left_Eye_Images

When Allegiant Stadium opens in 2020, it will have the same on-site parking issues as most new NFL-size stadiums built in the middle of a city.

Consequently, off-site parking will be key to the game day transportation plan.

The Raiders have been working diligently to address stadium parking, purchasing or securing leases to various lots over the last year-and-a-half, including the recent purchase of a 17-acre lot a mile away from the stadium.

Obtaining parking lots in each direction of the stadium was a strategic move, allowing for a dispersed parking plan, according to Raiders President Marc Badain.

“For ingress and egress of both coming to the stadium and leaving the stadium, you want to make sure that not everybody is going to the same location,” Badain said. “You can see around the league that stadiums around the league (that) have massive amounts of on-site parking, while it’s convenient, sometimes getting that many cars out at the same time can take a long time. We wanted to make sure we could disperse the parking for what’s outside of on-site, north, south, west and to the extent we could use some of the Strip parking to the east … so as folks leave the building, you’ll have people going in multiple different directions.”

If you’ve been following along, you know where most of the lots are located and likely have heard the estimated times traveling to the stadium would take.

I took to the road — and the sidewalk — to give a better picture of what traveling to the stadium will be like for Raiders and UNLV football games beginning in August 2020.

Here are the travel times on a Friday morning from each of the lots that have already been identified by the Raiders.

The largest of the announced off-site parking lots is at The Orleans located off Tropicana Avenue and Arville Street.

The area in the northern end of the hotel-casino property will feature 3,700 to 4,625 parking spaces.

Taking Arville, turning left on Tropicana, right on Valley View Boulevard and then left on Russell Road until reaching Polaris Avenue, where the stadium is located, took seven minutes in normal traffic.

The Raiders plan to park fans on the former Southwest Gas facility land encompassing 9.4 acres. The lot is expected to fit 1,025 to 1,175 vehicles and sits just across the street from The Orleans.

The southwest corner of Blue Diamond Road and Las Vegas Boulevard is home to a 20-acre plot of land where the Raiders plan to park between 2,900 and 3,625 vehicles.

Starting on Las Vegas Boulevard and heading north, I then took a left at Russell Road and then a right on Polaris Avenue, where the stadium is located. The drive in normal traffic took 12 minutes.

This 20-acre lot is slated to feature between 2,000-2,500 parking spaces in the area of Windy Street and Las Vegas Boulevard.

The 19.2 acre parcel located just off Las Vegas Boulevard and Warm Springs Road is being leased from Clark County for at least two years for $776,187 annually. The lot can hold up to 2,300 vehicles and has room for shuttle loading and unloading areas.

The trek begins heading west on Warm Springs, then north on Las Vegas Boulevard, until reaching Russell Road, where you head west until reaching Polaris Avenue where the stadium is located. The trip took about 11 minutes.

The recently purchased 17 acres of land once owned by Frias Transportation group, which ceased operations earlier this year, provides the Raiders with around 2,700 parking spots within walking distance of Allegiant Stadium.

The site includes a large ground level lot across Valley View and another plot of land, with a four-story parking garage as well.

Walking down Reno Avenue, to Procyon Street to Hacienda Avenue until I arrived at Polaris Avenue where the stadium is located took eight minutes.

Shuttles will also be available for those who don’t want to make the approximately 1-mile trek on foot.

A portion of the 15-acre Las Vegas Village is being leased to the Raiders by MGM Resorts for at least two years, providing an undisclosed amount of spaces at the south end of the Las Vegas Strip.

Taking Mandalay Bay Road, which turns into Hacienda a short distance later, the journey is a straight shot between Mandalay Bay and the Luxor resorts, over the Interstate 15 bridge, to what will be called Al Davis Way, which will lead fans right up to the stadium.

Hacienda will be closed to traffic on Raiders game days at the entrance of the Mandalay Bay parking garage, allowing for a safe trek.

No tailgating will be allowed on the festival parking site, in respect to the victims of the Route 91 Harvest festival shooting that occurred on the site in 2017.

The trek takes about 18 minutes to complete.

The other parcel of land the Raiders are leasing from Clark County for at least two years, with the option to add additional years, is located on the south side of Russell Road near Wynn Road.

The 1.76 acre site is one of the smaller parking lots announced by the team, but opens up another valued park-and-walk opportunity for fans.

Hoofing it to the stadium along Russell Road includes crossing at Valley View Boulevard and takes about eight minutes on a normal day.