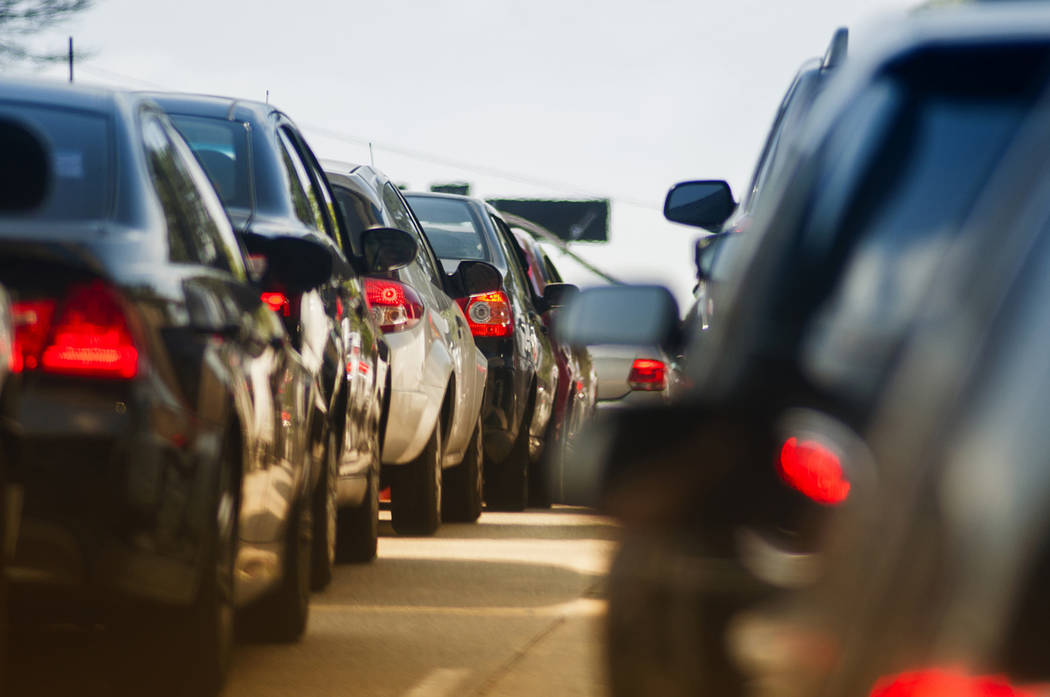 Though a recent project aimed at alleviating traffic in the area is less than a year old, the Henderson Interchange is still a source of disdain for local residents.

A recent re-striping project by the Nevada Department of Transportation removed an area where traffic exiting U.S. Highway 95 northbound to the 215 Beltway westbound would bottleneck. The project created an access road to the 215, which also splits off for motorists to access Lake Mead Parkway eastbound.

The project eliminated access to Gibson Road for those heading west on Lake Mead Parkway to the 215 Beltway westbound and created a new bottleneck where Lake Mead merges into the 215 and two lanes are constricted into one.

Help is on the way, but changes to the U.S. 95/215/Lake Mead Parkway interchange are still up to 10 years away.

“The goal of this project is to reduce that congestion, improve safety and freeway operations,” said Tom Davy, Henderson city engineer.

The project is slated to cost between $250 million and $300 million depending on which version is chosen, according to James Caviola, president of CA Group, the firm Henderson contracted to develop the proposed plans.

Depending on available funding, work could be carried out in one or two phases.

“The hope is to do it all and to get in there and do it right and get out,” Caviola said. “To have a nice facility for those who traverse in the area.”

The one phase approach would call for engineering and construction beginning in December 2021 and finishing in November 2025.

The two phase approach would add a second phase to finish work that funding is not available for during for first phase.

Phase 2 would feature an engineering and construction timeline starting in December 2020 and ending in November 2030.

Here are some of the key features of both options.

The plan has a similar configuration to the one in place, but has updated connectivity and increased traffic flow aspects.

Option 1 includes three lanes on the flyover ramp from 215 eastbound to U.S. 95 northbound, up from the two today; connection is established with Gibson with a braided ramp concept, with a ramp leading to Gibson traveling over traffic from U.S. 95 and the road leading from Lake Mead having a direct access right turn lane to Gibson. The ramp from U.S. 95 would merge with the Lake Mead ramp traffic just before the traffic signal at Gibson.

A crossover interchange is being considered for the area, which would be unique as there are only two other versions of the road project in the U.S. — one in the Baltimore area and one in Alabama.

To access some off-ramps, motorists would have to cross over traffic at various points.

A dedicated two-lane off-ramp from U.S. 95 to the 215 westbound is featured in this option, with a separate Lake Mead Parkway exit located just ahead of the 215 off-ramp on the far left hand lane of U.S. 95.

Both options add an additional lane on U.S. 95 south of the interchange up until Horizon Drive.

The preferred option should be chosen by mid-2020.

Work associated with the planned interchange upgrade is being done with an eye toward 2040 and the projected traffic increase in the area, Caviola said.