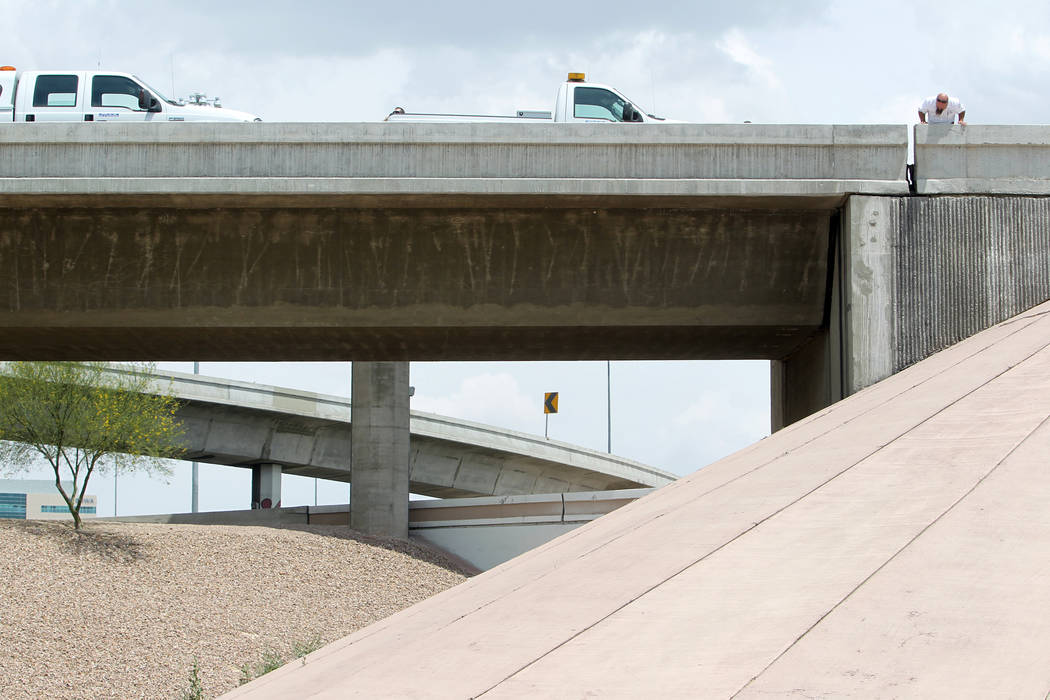 Officials from the Nevada Department of Transportation and Nevada Highway Patrol troopers investigate possible damage on the ramp from southbound U.S. Route 95 to southbound Interstate 15 on Friday, May 22, 2015. A 5.4-magnitude earthquake shook Las Vegas and surrounding areas Friday morning, and the state closed a portion of the Spaghetti Bowl to inspect a ramp for possible damage, backing up traffic for miles. (K.M. Cannon/Las Vegas Review-Journal)

With the 7.1 magnitude and 6.4 magnitude earthquakes that rattled portions of the Las Vegas Valley Thursday and Friday fresh on the minds of area residents, those with concerns can rest easy knowing bridges and roads in Nevada are built with seismic activity in mind.

Nevada is home to the best-rated bridges and roads in the country, which are not only built to withstand seismic events but also are all fairly new, according to Tony Illia Nevada Department of Transportation spokesman.

The department puts in the work to ensure the bridges in the state are up to code and safety measures are met on a regular basis.

“NDOT inspects 1,900 bridges in Nevada a minimum of every two years,” Illia said.

Additionally, inspections could occur following a seismic event in the area since department policy requires that every structure within a 50-mile radius of the epicenter be inspected following an earthquake with a 5.0-magnitude or greater.

That’s what happened in May 2015 following a a 5.3-magnitude earthquake in Caliente. NDOT inspected every bridge within a 50-mile radius and found them all to be structurally sound, Illia said.

“We completed 160 hours of bridge inspections with two teams of engineers examining 55 bridges throughout Clark and Lincoln counties, covering such communities as Caliente, Pahrump, Overton, Mesquite, Bunkerville, Alamo, Pioche and Rose Valley,” he said. “Inspectors looked for quake-related delaminations, cracks, misaligned bridge members, displacement and settlement, among other things. Happily, every bridge inspected was found to be structurally sound and safe for public travel.”

The 2015 quake also closed down the Spaghetti Bowl interchange for several hours as NDOT crews inspected the freeway ramps for possible structural damage. Rubber casing on one of the Spaghetti Bowl bridges was forced loose in the earthquake and an emergency repair was conducted. NDOT said the joint damage was pre-existing, but the earthquake dislodged the protective rubber encasing the bridge seam, making it look much worse than it actually was, an NDOT engineer said following the 2015 event.

With the epicenter of last week’s tremors located 150 miles and 220 miles away from Las Vegas, no inspections were conducted in Nevada, Illia said

Every few years NDOT teams up with California and other agencies like the National Guard, the Metropolitan Police, Nevada Highway Patrol, as well as gas, electrical and water companies to perform a large-scale coordinated earthquake drill.

The last one took place in 2016 when the agencies tested a scenario in which an earthquake shook Las Vegas and was followed by a major earthquake in California along the San Andreas Fault.

“Such exercises help emergency responders prepare and help planners establish steps to be undertaken and roles to be filled,” Illia said. “We conducted a similar exercise with Project Neon, testing out the response to a truck spilling toxic chemicals and downing power lines. We took a day and came up with a worst-case scenario, which helps determine what would we do, how to respond and how we would go about setting up a command center.”

NDOT also plans on what to do in case fuel shortages occur in relation to an emergency scenario, as NDOT has a fleet of state vehicles and its own refueling facilities.

In the case of a catastrophic event, NDOT would need to ration fuel to save enough to operate heavy machinery needed for removing rubble from a roadway or clearing a landslide caused by an earthquake.

“It’s always good to be prepared for the worst as much as possible,” Illia said.