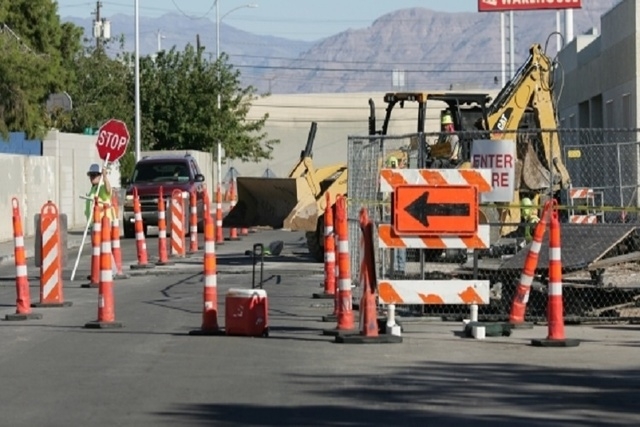 Road construction to avoid in the coming week.

■ Lanes of Decatur Boulevard will be disrupted for pavement reconstruction between Craig and Lone Mountain roads through Monday [today].

■ The ramp from southbound Interstate 15 to eastbound Flamingo Road will be closed for maintenance work from 9 p.m. to 5 a.m. Tuesday and Wednesday.

■ Lanes of Cheyenne Avenue will be disrupted for landscaping between Buffalo Drive and Tenaya Way through Thursday.

■ Lanes of Elkhorn Road will be disrupted for cable replacements and vault upgrades between Jones Boulevard and Bradley Road through Friday.

■ West Flamingo Road will be reduced to one lane in each direction between Arville Avenue and Las Vegas Boulevard for milling and paving work between 9 p.m. and 5 a.m. through Friday.

■ Lanes of Stewart Avenue will be disrupted for detention center expansion between Spectrum Boulevard and Mojave Road through Sunday [April 24].

■ California Avenue will be closed from Casino Center Boulevard to Main Street for water and sewer line installations through April 25.

■ Lanes of Decatur Boulevard will be disrupted for pavement reconstruction between Craig and Lone Mountain roads through April 25.

■ Lanes of Canyon Run Drive will be disrupted for landscaping between Town Center Drive and Rampart Boulevard through April 29.

■ Lanes of Far Hills Drive will be disrupted for landscaping between Anasazi Drive and the 215 Beltway through April 29.

■ Lanes of Rampart Boulevard will be disrupted for landscaping between Summerlin Parkway and Lake Mead Boulevard through April 29.

■ Lanes of Vegas Drive will be disrupted for cable replacements and vault upgrades between Simmons Street and Tamarack Avenue through April 29.

■ Lanes of Oakey Boulevard will be disrupted for road paving between Rainbow and Valley View boulevards through April 30.

■ RTC bus Transit Route 109, the Maryland Parkway route, will be detoured due to road construction through April. Stops on George Crockett Road will not be served. Alternative stops are available on Routes 117 (Las Vegas Boulevard South and Silverado Ranch Road) and 217 (Warm Springs Road and downtown Henderson).

■ Traffic will be shifted from the middle to the outside lanes of Glen Avenue at Dalhart Avenue for sewer line construction. No parking will be allowed on the streets Monday[today] through May 2. Work is scheduled Monday through Friday, 7 a.m. to 3 p.m.

■ Lanes will be reduced at all hours on northbound U.S. Highway 95 Mondaytoday through May 3 between Eastern Avenue and the Spaghetti Bowl for concrete patch repairs on bridges. In addition, the Las Vegas Boulevard onramp to U.S. 95 will be closed at the same time.

■ Garces Avenue will be closed at Main Street for a variety of street improvements through May 6.

■ Ford Avenue will be closed between Gilespie Street and Las Vegas Boulevard through May 15 for a sewer line construction project. Work will be conducted Monday through Friday, 6:30 a.m. to 3 p.m., but restrictions will be in place even when work is not underway. Property access will be maintained when possible.

INFO BELOW FOR ONLINE

■ Lane restrictions are planned on Oakey Boulevard between Rainbow and Valley View boulevards for repaving, median and traffic signal modifications and the installation of new traffic delineation. Vehicle lanes will be reconfigured with bicycle lanes. Traffic will be restricted to one lane in each direction from 7 a.m. to 4 p.m. Mondays through Fridays through May 21. Officials recommend Charleston Boulevard as an alternate route.

■ Bridge repairs are planned on U.S. Highway 95 between Las Vegas Boulevard and Main Street through June 15. Work is scheduled from 7 p.m. to 5 a.m. Sunday through Friday, through Saturday with day and night work from Sunday through June 15 with the exception of the Memorial Day weekend. Restrictions will be in place on the northbound freeway with alternating northbound onramp closures at Las Vegas Boulevard and Casino Center Drive.

■ Lanes of Durango Drive will be disrupted for a gas line replacement between Desert Inn Road and Vegas Drive through June 30.

■ Sunset Road in Henderson will have periodic lane shifts and restrictions between Mountain Vista Street and Annie Oakley Drive through mid-July for major resurfacing improvements. Work will include widened bike lanes in each direction, signal improvements at Sunset and Athenian Drive and upgrades to existing sidewalk ramps and driveways. Most work will occur daily from 9 p.m. to 6 a.m.

■ Lanes of Grand Teton Drive will be disrupted for median island maintenance between Durango and Buffalo drives through July 16.

■ Lanes of Elkhorn Road will be disrupted for a slurry seal between Decatur and Jones boulevards through Aug. 7.

■ Work will continue through the summer on a 13-mile paving project on Interstate 15 north of Mesquite. The project will run from the Nevada state line to the Virgin River Gorge and include improvements to the Littlefield bridge at Milepost 8. Work will occur Mondays through Fridays, 6 p.m. to 6 a.m. Work will begin on southbound lanes at the Littlefield exit.

■ Work on the Regional Transportation Commission’s Flamingo Road Corridor Improvement Project will continue on the west side of Flamingo Road from Rainbow Boulevard to Hotel Rio Drive through fall.

■ Lanes of Main Street will be disrupted for general street improvements between Bonneville Avenue and Las Vegas Boulevard through Dec. 1.

■ Traffic will be disrupted for projects on Racetrack Road and the area around Heritage Park in Henderson through December. Racetrack will be resurfaced from Boulder Highway to Athens Avenue, expanded to four lanes from Boulder Highway to Burkholder Boulevard and Burkholder to Athens, adding bicycle lanes, installing a traffic signal at Blue Lantern Lane and a traffic roundabout at Newport Drive as well as a vehicular bridge over a flood channel on Newport.