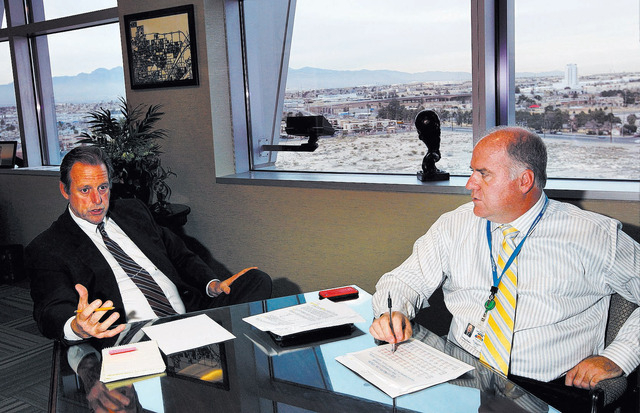 North Las Vegas looked to save some $665,000 in annual salary and benefits costs this week, laying off five high-level administrators in a move that will see the city’s Administrative Services Department fold into its Finance and Code Enforcement divisions.

Only one of the officials will be replaced — the city plans to hire a replacement for Henley to head a new-look Parks and Leisure Services Department. City officials didn’t say why Henley’s position was the only one they expect to fill.

This week’s staff exodus counts as just the latest in a series of shakeups since Mayor John Lee took office in July.

City Attorney Jeff Barr and City Manager Tim Hacker were the first to go, handing in their resignations within weeks of Lee’s arrival in July.

They were followed out the door by Finance Director Al Zochowski, who left in September under circumstances the city has not explained.

Lee said he didn’t have a hand in this week’s departures, despite a sweeping reorganization he alluded to in his State of the City address last month. He said there’s no political motivation behind the moves, just a need for a brighter bottom line.

“I didn’t have much to do with it,” the first-term mayor said Friday. “It came from the city manager’s office.

“I don’t know when they were brought on or by who,” he said. “I have no idea under what political regime they came in. … I don’t want anything to do with the past, my focus is the future.”

City Manager Jeff Buchanan did not respond to requests for comment Friday.

Officials scrapped a planned shared services meeting that would have been held at Las Vegas City Hall within hours of Thursday’s restructuring, instead setting up a closed-door staff-level “workshop” on the topic.

Ryann Juden, Lee’s chief of staff, scoffed at a question about the layoffs’ link to shared services.

“North Las Vegas can walk and chew gum at the same time,” Juden said Friday. “The two are not at all related. We’re just searching high and low for any potential sources of efficiency.”

That doesn’t mean work on a preliminary shared services agreement with the city of Las Vegas won’t lead to some additional personnel changes.

The Review-Journal has learned the city, which has been in talks to share costs and work duties at nearly a dozen Las Vegas agencies since November, might look to consolidate some of its more severely understaffed departments, including purchasing and economic development. It remains unclear if such a move might create redundancies among city staffers.

Adair, who moved over from Henderson-based cloud computing giant Switch Communications in September, said only three or four of the original 11 agencies targeted under a preliminary shared services deal look set to save money for both cities and in some cases could actually cost Las Vegas money.

“Today was a rough day,” Adair said late Thursday. “We’re struggling to figure out a way to solve the projected seven-year deficit and already looking at this year’s $18 million (fiscal year) deficit.