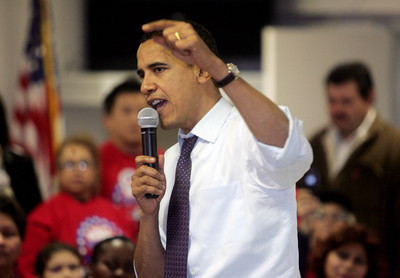 Democratic presidential candidate Barack Obama on Sunday told his supporters at the Culinary union in Las Vegas that the "insiders" who oppose his campaign are trying to "change the rules" to prevent them from voting.

"Ever since I got the support of Local 226, the lawyers started to get involved," he told a group of union members at their hall Sunday afternoon. "The rules were OK as long as you did what they wanted you to do. But as soon as you said, ‘I’m going to support the outsider, I’m going to support the new guy,’ all of a sudden they decided they want to change the rules."

The Culinary union in Nevada is also known as Local 226 of the international Unite Here union of hotel and textile workers.

Obama was referring to a lawsuit filed Friday that seeks to get rid of nine special locations on the Strip where workers can attend Saturday’s 11 a.m. Democratic presidential caucuses. The "at-large" precincts are the only exception to the rule that voters must attend the caucus for the precinct in which they live.

The Nevada Democratic Party, which is being sued by a group of individuals and the teachers union, contend the at-large precincts give working people a voice in a town where many work on Saturdays. The lawsuits argue that the at-large precincts are unfair because non-Strip workers do not get the same consideration.

Obama rallied the union, which declared its support for him Wednesday, urging members to topple the establishment they’re up against.

"Are we going to let a bunch of lawyers prevent us from making change in America?" he shouted.

"No!" they shouted back.

"Victory is going to be sweet because now they’ve tried to stop us," he said. "The day after … they will have known the power of the Culinary workers!"

That the lawsuit has become a rallying point for Obama and his supporters raises the question of whether it has backfired, if indeed, as is assumed, the lawsuit is a tactic intended to hurt his chances.

Obama did not bring up his chief rival for the nomination, Hillary Clinton, many of whose supporters have connections to the parties in the lawsuit. Her campaign is not directly involved.

Clinton was asked about the lawsuit Sunday morning on "Meet the Press," taped in South Carolina, where she was campaigning.

Clinton said she did not have a position on the lawsuit, but as to the issue involved, she said a lot of people who will be working will not have caucus sites set up near their workplaces. "The caucus idea is for neighbors to get together to argue and talk about their choices," she said.

Since losing the Iowa caucuses, Clinton has been critical of how caucuses operate, saying their requirement of in-person, on-time participation leaves many out.

Obama had a full Sunday in Southern Nevada, first making a surprise appearance at a downtown black church, where he spoke at the end of the service.

Before he arrived, the pastor of the Pentecostal Temple Church of God in Christ, speaking from the pulpit, advocated for Obama, possibly breaking the law. Pastor Leon Smith told the congregation that "the more he (Obama) speaks, the more he wins my confidence, and … if the polls were open today, I would cast my vote for this senator."

He urged them to do the same, saying, "If you can’t support your own, you’re never going to get anywhere. … I want to see this man in office."

Under federal tax law, nonprofits such as churches are prohibited from endorsing or opposing political candidates. The Internal Revenue Service has ruled that the forbidden partisan activity includes speech from the pulpit that indicates the church favors a particular candidate.

The campaign said the pastor simply had made supportive statements about Obama’s record. The church could not be reached late Sunday.

As Obama took the stage, the church choir of mostly red-jacketed women swayed behind him, breaking into song at the word "change," the Obama campaign’s byword.

Obama spoke to the congregation of more than 400 for more than 20 minutes. He told them about his home congregation in Chicago and his pastor, Jeremiah Wright, who is somewhat controversial for his black-separatist views.

Obama gave his speech about unity and change and ending business as usual in Washington, drawing lots of applause.

"It’s not surprising that people are frustrated," he said. "If you work, you shouldn’t be poor in America."

At one point, a gray-haired woman in a purple lace dress stood up in the third row, her hands raised, palms forward. Then she clasped her hands to her chest and nodded with obvious emotion.

Speaking to reporters outside the church Sunday, Obama was asked about Clinton’s criticism of his Iraq war record. She has said his much-touted opposition to the war in Iraq, dating to before the war began, should be questioned because in 2004 he said he was unsure how he would have voted on the war authorization and, when he took office in 2005, voted to continue funding for the war.

Clinton voted to authorize the war in 2002, when Obama was an Illinois state senator running for U.S. Senate, and voted for war funding until recently.

He said the 2004 statement was in answer to a question about the then-Democratic nominees, John Kerry and John Edwards, who voted for the war, and "I was trying not to throw the Democratic nominee and vice presidential nominee under the bus."

He voted for war funding in the Senate, he said, because "once we had our troops two years into a war, it was important that we try to do the best possible job on it."

Obama also defended his lobbying-reform bill, which Clinton has called ineffective. Clinton, he said, "hasn’t taken the issue of lobbying very seriously. These are the people who fund her campaigns."

After his speech in the church, one parishioner, Jamesella Kountz Proctor, said she was still undecided between Obama and Clinton. Obama was "interesting," she said, but hadn’t allayed her concerns about "whether or not he can really deliver" on his promises.

Proctor, 54, said she was from Arkansas and had come to admire Clinton for "what she stands for, and she has done things that we can really document. I would rather have someone that’s seasoned."

Another congregation member, 53-year-old Saundral Preston, called Obama "awesome" and said she definitely would be caucusing for him on Saturday. Preston, a schoolteacher originally from Chicago, said Obama’s visit to the church "let the people know that we’re not forgotten. Nobody’s a little person to him."

Obama went from the church to the Culinary union event, his second such appearance in three days. Attesting to the all-out effort Culinary is making on his behalf, boxes in the back of the room were stuffed with plastic bags, each one a kit containing an Obama shirt, Obama signs and pro-Obama leaflets and information. More boxes contained caucus pledge cards and black "I’m Caucusing With the Culinary" buttons with yellow lettering.

After the brief stop to address the union members, Obama visited a middle-class neighborhood in eastern Las Vegas, near Washington Avenue and Nellis Boulevard.

He spent about half an hour zigzagging across the street from house to house.

His approach was low-key, engaging people who opened their doors or met him on the sidewalk in casual conversation, asking how they felt about the economy and then asking whether they would caucus for him almost as an afterthought.

His jacket off, sleeves rolled up and hands often in his pockets, he said to one middle-aged white man who answered his door, "I’m Barack Obama. I’m coming here to campaign a little bit. How you doin’?"

The man looked skeptical, but what he said could not be heard from the street, where the press was restricted to standing. When an Obama aide approached him afterward, he would not fill out a pledge card.

The next house was better: a bubbly woman gushed over Obama, and when he brought up the pledge card she said, "All right! Sounds good! Good luck!"

Obama joked to the press the woman was in a good mood because she was a San Diego Chargers fan, and the team had just won a playoff game.

Obama’s day wasn’t over. He headed to Pahrump next for a town hall with members of the public in a middle school. About 700 people attended, not filling the gymnasium.

After his stump speech, he asked that undecided voters only ask questions. Halfway through, most of the power went out, forcing him to shout for a few minutes. There was still some light.

Obama outlined his plan for universal health care and criticized his rival’s.

"Senator Clinton, she has what’s called a mandate, and mandate is a fancy word for saying that under her plan the government would force you to buy health insurance," he said.

Clinton has said that 15 million people would be left uninsured without such a requirement, which Obama called "just not true."

Two questions were about illegal immigration. Obama emphasized border security and punishing employers who hire illegal immigrants, but explained why he thinks those currently in the country cannot be deported en masse and should have a "pathway to get right and get legal."

Pahrump resident J.J. McCann, 69, came to the event because his wife is an Obama fan.

McCann had been on the fence, but was won over.

"The thing I like about him more than her (Clinton) is that she has all these power-hungry corporations behind her," he said. "They’re not going to let her change things very much."