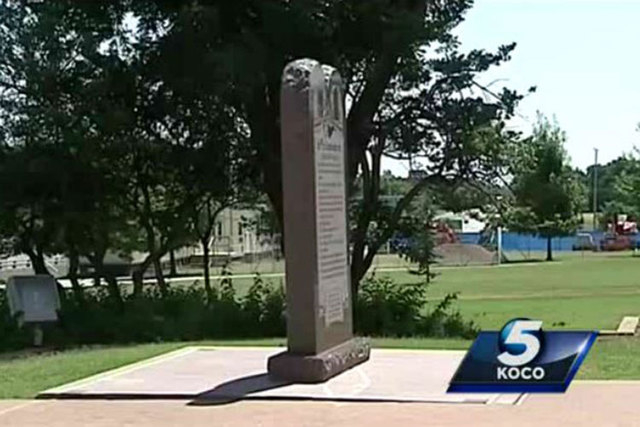 The Oklahoma Supreme Court ruled Tuesday, June 30, 2015, that the state must remove a 6-foot tall granite monument of the Ten Commandments from its capitol. (Screengrab/KOCO)

A 6-foot-tall granite monument of the Ten Commandments will remain on statehouse grounds while Oklahoma appeals a state Supreme Court decision ordering it taken down.

“Oklahoma is a state where we respect the rule of law, and we will not ignore the state courts or their decisions. However, we are also a state with three co-equal branches of government,” Gov. Marry Fallin said in a statement Tuesday.

Fallin said the state attorney general has filed an appeal, while the legislature pursues changes to the state Constitution that makes the monument legally permissible.

“During this process, which will involve both legal appeals and potential legislative and constitutional changes, the Ten Commandments monument will remain on the Capitol grounds,” she added.

Last week, the state Supreme Court ordered the monument removed because it violates the state’s constitutional ban against the use of public funds or property to benefit a religion.

The decision came after years of controversy and legal battles.

In an interview with CNN affiliate KOCO, Bruce Prescott, an ordained Baptist minister and one of the plaintiffs in the suit against the display, said, “I’m not opposed to Ten Commandments monuments. I’m just opposed to the placement on government property, because I think that the government needs to be neutral.”

Fallin said the monument was built with private dollars.

“It is a privately funded tribute to historical events, not a taxpayer funded endorsement of any religion, as some have alleged,” she said.