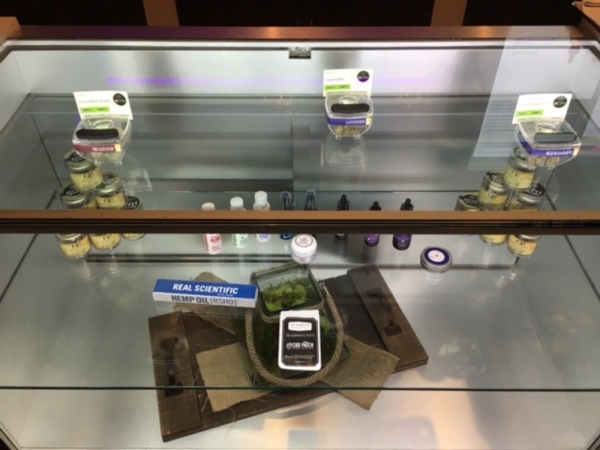 A display case is seen in the medical marijuana dispensary Las Vegas ReLeaf, which is holding its grand opening weekend. COURTESY of Jason Sturtsman 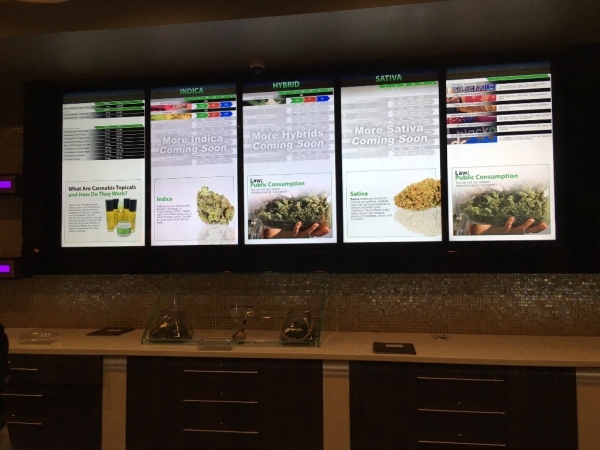 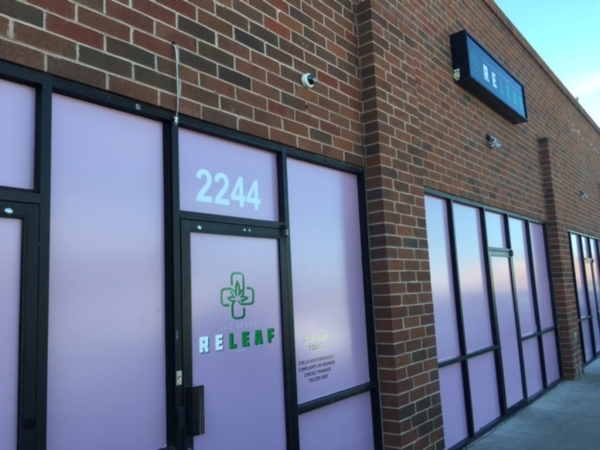 Officials have asked medical marijuana dispensary Las Vegas ReLeaf to remove the sign from its door, because such promotions are not allowed. COURTESY of Jason Sturtsman 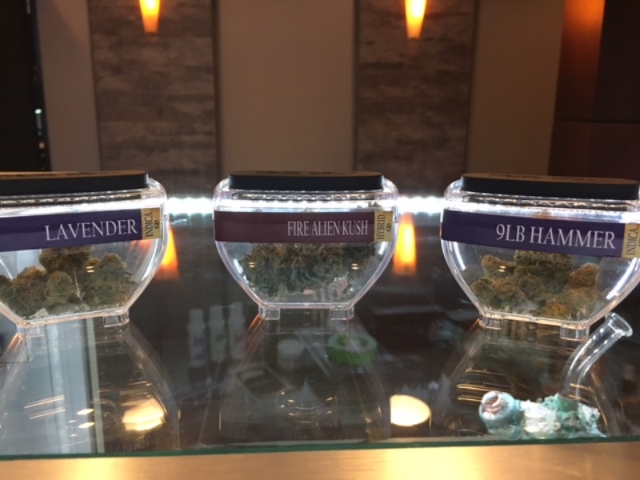 If you are a tourist, and you brought your driver’s license and medical marijuana card (or your California doctor’s recommendation), then you are moments from a Vegas dispensary that will legally sell you your medicine.

This is the grand opening weekend of Las Vegas ReLeaf, 2242 Paradise Road.

It’s next to the McDonald’s in the shadow of the Stratosphere on a specially zoned corner.

There’s the McDonald’s, a Starbucks, a pawnshop, four massage places (which one to choose from, for a relaxing, long massage?!), a boxing place, a Subway and ReLeaf.

Even though marijuana is a medicine by law, and safer than every Valium you’ve ever bought 30 of, for $3 a bottle, politicians have placed Soviet Union restrictions on marijuana joints’ exteriors. It’s just blank everywhere.

There were little logos on ReLeaf’s front doors, buuut:

“They asked us to take the sign off of our door,” Al Fasano, a co-owner and COO, said.

Imagine spending millions of dollars on what is essentially a pharmacy, waiting years for political red tape to clear and for weed to be grown, and you can’t even put a door sign up.

It begins: You get buzzed passed the front door. You find yourself in a locked hall. A giant, friendly fellow to your right smiles and says hi.

This warrior is Quincy Taylor, four times your size, and a former Mr. Olympia competitor.

You sign in. You get buzzed into the next area, a pretty Vegas lounge (red couch, menus via TVs, metallic-tile floor, A-ha’s “Take on Me” playing overhead, no discernable smell since there’s no smoking on the premises), and you do some more signing in.

You get buzzed into the third area, a pretty little store with budtenders (1,000 people applied for 40 jobs), and (cue “The Simpsons” chorus opening of “ahhhh”) finally you see the weed and the Rick Simpson hemp oil.

For opening weekend, ReLeaf has for sale only two indica strains and one hybrid strain, and sales for the moment are restricted to buying only one or two eighths at $65 an eighth.

But at least medical patients can buy medicine.

“We could easily process somewhere in the neighborhood of 1,100 or 1,200 patients between now and our next delivery” next week, Hayford said.

By the way, who are these Scooby snack-eating kids buying pot these days?

That’s right. A typical medical marijuana demographic is an ill resident of Sun City. Congrats, politicians, for making aging people dying of cancer pay a doctor for a recommendation, hundreds of dollars in state paperwork, then waiting two months for a letter instructing them to drive to the DMV, wait in line, get their photo taken, and issued a one-year card that must be renewed all over again from scratch in 10 months.

What do you think a politician’s heart looks like, anyway? (And shouldn’t that law, that some pharmacies must be open 24 hours a day in residential neighborhoods, apply to weed?)

Marijuana growers are expected to be in full swing by mid- to late-2016 — just in time for the November 2016 election, when Nevada, California, and other states are expected to go over the heads of alcohol-swilling politicians once more to vote for recreational marijuana for adult taxpayers.

Who are these marijuana people at ReLeaf?

The Jamesons are grand-opening their second clinic on Wednesday, the Ruffin Family Clinic (money was donated by Treasure Island hotel owner Phil Ruffin and his wife Oleksandra), on Martin Luther King Jr. Boulevard, expected to more than double the existing clinic’s medical and dental numbers.

This is all personal for Hayford.

“My brother was on (nonmarijuana pharmaceutical) meds that had him hallucinating. He went into thoughts of suicide,” Hayford said.

But marijuana stopped all those terrible side effects. “He went to cannibis, and he got relief.”

Strange note: None of the people at ReLeaf spoke angrily or appeared upset about the politics. They had a chill, zen feeling about the government.

“The good news is, the regulators have their finger on the pulse, and they’ve been very responsive and supportive,” Hayford said.

Will some people smoke weed more for recreational purposes, or to write a song? You bet your booty. Pharmaceutical companies and tobacco companies are already fighting for future pot profits. Hotels are already full of Californians getting their weed from impossible-to-detect vapor pens. Beer gardens for pot are thought to be inevitable for hotels.

Standing on the corner of ReLeaf and four massage parlors, I saw the future of Las Vegas, and it’s the Amsterdam of the Americas.

The Jamesons’ son, Michael, is an assistant manager. He is 25 and he’s been to Amsterdam 25 times, since he went to school at roughly nearby St. Andrews in Scotland.

Why does he think so many tourists will bring Amsterdam to Vegas?