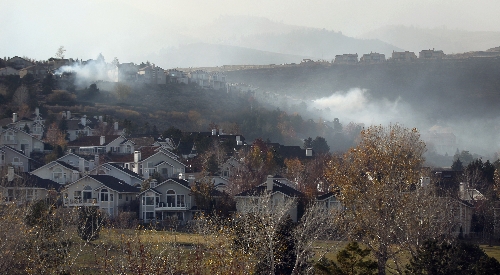 RENO — Shortly before he died of an apparent heart attack, a 74-year-old man helped alert an elderly neighbor to a fast-moving, 2,000-acre fire that destroyed 30 homes in Reno last week.

Gordon Cupples, a former Marine and Washoe County Sheriff’s Air Squadron search-and-rescue team member since 2006, was the only person to die in the blaze fanned by gale-force winds, the Reno Gazette-Journal reported. Sixteen others were sent to hospitals.

After being awakened by the Nov. 18 early-morning fire, Cupples rushed to check on the elderly man next door. He climbed two flights of stairs as he and first responders pounded on doors and windows of the three-story house amid smoke.

He returned to his own house, where his wife of 32 years, Roxana Cupples, had packed items in the dark. The couple packed their van and drove away.

"All of a sudden he said, ‘I can’t see,’ " she recalled, adding she thought it was the smoke.

Her husband went unconscious behind the steering wheel. The van stopped after she shifted the gear into neutral. Efforts to revive him at the scene failed.

"They (paramedics) came and they said, ‘We’re so sorry. There’s nothing more that we can do,’ " Roxana Cupples recalled.

She said he found purpose in helping others, including the next-door neighbor.

"He felt like he could help. And he did," she told the Gazette-Journal. "Every human being has in them that desire to help. Gordon was immediately concerned about our neighbor."

"(He was someone who) without hesitation in his mind knew what the right thing was to do and didn’t look back," he said.