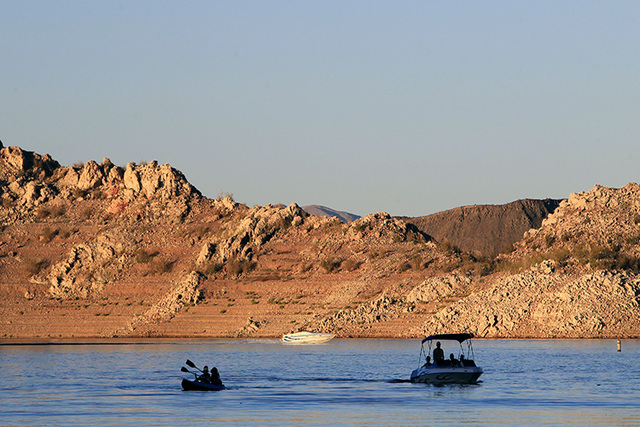 A community advisory committee is recommending a new $650 million water project — and a rate hike to pay for it — to secure the Las Vegas Valley’s water supply even under a worst case scenario at Lake Mead.

The proposed pumping station would allow the Southern Nevada Water Authority to keep drawing from the lake should it shrink to “dead pool,” a once-unthinkable low point at which Hoover Dam can no longer release water.

Water authority chief John Entsminger said he agrees with the recommendation reached this week by the 22-member Integrated Resource Planning Advisory Committee, which was formed by the authority in 2012 to review the agency’s rate structure and reconvened early this year to look at water resources into the future.

“Having a low-lake-level pumping station really gives our community the water security it needs,” Entsminger said.

In its final report to the authority board, the advisory committee calls for the project to be built “within the swiftest feasible time frame.”

To pay for the work, the committee recommends a rate increase that would cost the average residential water customer between $4 and $5 more a month by 2017. The rate hike would take the form of a fixed charge that would vary based on the size of a customer’s service line. The committee is calling for the increase to be phased in over three years to give customers a chance to adapt to it.

The water authority board is expected to discuss the committee’s recommendations next month. Entsminger said a vote on the new pumping station could soon follow. If the board signs off on the project, he said it will likely take about a year to design and 4 years to build.

It won’t be cheap, either, especially for a water agency and customer base already saddled with the lingering debt from more than $3 billion worth of major construction and expansion that began more than a decade ago and continues today.

Over the past 15 years, the authority has spent more than $2.5 billion to expand the valley’s water distribution system and construct a second treatment plant, a second intake pipe and a second pump station to draw water from Lake Mead. The agency is now constructing a third straw into the shrinking lake for an additional $817 million and counting.

The new pump station would tie into that third straw, allowing the intake to draw up to 900 million gallons of water a day from one of the lowest points in the reservoir.

Since 2000, the surface of Lake Mead has dropped about 130 feet amid record drought on the over-appropriated Colorado River. Since dipping to a new record low in August, the water level has gone back up by 4 feet, but current projections call for the lake to fall back into record territory in April.

Right now, the surface of the lake sits at about 1,084 feet above sea level. The intake pipes and pumps currently used to supply the valley with about 90 percent of its water will stop working should the lake drop another 85 feet.

The dead-pool level, at which Hoover Dam can no longer release water downstream, is at about 900 feet above sea level. The proposed Intake Pump Station 3 would allow the water authority to keep drawing from the lake down to about 870 feet above sea level, though there would be little left of the lake under such a doomsday scenario.

Entsminger said it is more likely that the new pump station will be needed to get the community through a year or two in which the lake dips below the 1,000 foot mark, forcing the existing pipes and pumps to shut down. “There’s still going to be some water coming into Lake Mead,” he said.

Plans for the third intake originally included a pump station, but water authority officials decided to defer that part of the project in 2008 to save the agency roughly $300 million amid a deepening Great Recession.

Entsminger said the $650 million pump station now being proposed would reach 140 feet deeper and pump 50 percent more water than the one the authority shelved six years ago.

“This ensures our ability to deliver the water that we have,” he said.

To secure a new source of water and reduce the community’s dependence on the Colorado River, the authority has long planned to siphon groundwater from across a 300-mile swath of rural eastern Nevada and pipe it to Las Vegas. The construction of a new pump station at Lake Mead doesn’t change those plans, Entsminger said.

“I think they’re really separate projects,” he said. “I consider (the pump station) a higher priority.”

Members of the Integrated Resource Planning Advisory Committee agree with him.

Though the controversial, multi-billion-dollar pipeline to rural Nevada has met stiff resistance, the committee said the project should remain part of the authority’s long-range resource plan.

Committee members also recommend sustaining efforts to conserve water in the community and on the Colorado River in cooperation with other water agencies and states in the region.