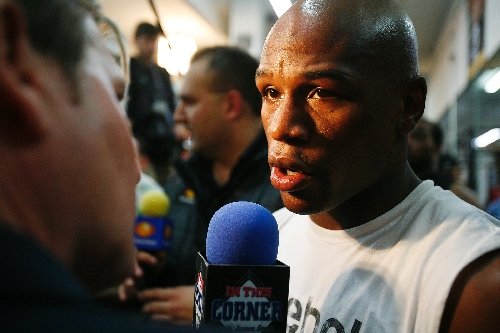 A former girlfriend of Floyd Mayweather Jr. is alleging the boxer assaulted her early Thursday morning at her residence.

Las Vegas police confirmed Mayweather is the suspect in a domestic violence incident with ex-girlfriend Josie Harris, who has three children with Mayweather.

She was taken to Southern Hills Hospital and Medical Center just after 3 a.m. Thursday, a family member said. She was treated and released.

The incident happened at Harris’ residence in the 3800 block of Tropical Vine Street, the family member said.

Police were trying to find Mayweather to interview him about the allegations, said Lt. Rob Lundquist, who oversees the Domestic Violence Detail.

On Thursday afternoon, Harris filed for a temporary protection order against Mayweather at Family Court, the family member said.

Harris has accused Mayweather of domestic violence in the past, only to recant her story or stop cooperating with police.

In December 2003, she told Las Vegas police that he assaulted her outside a nightclub during an argument over another woman.

But at the July 2005 trial, Harris testified that she had lied about being beaten. She told the jury that Mayweather was a “teddy bear” who had never laid a hand on her.

The jury acquitted Mayweather of the felony domestic violence charge.

In 2005, he was convicted in the unprovoked beating of two women in the Ra nightclub at Luxor and received a suspended one-year jail sentence and an order to undergo counseling.

Earlier this year, one of Mayweather’s bodyguards was arrested and charged with shooting at another man in a Las Vegas skating rink parking lot. The shooting happened after Mayweather confronted the victim over a text message from a few months earlier.

Mayweather, 33, is undefeated with 25 knockouts in 41 professional fights. His last fight was May 1, a 12-round unanimous decision over Shane Mosley at the MGM Grand Garden.

Mayweather currently does not hold a world championship boxing title but has won nine championships in five different weight classes.

Last week, he made headlines for a 10-minute rant on UStream video in which he attacked rival boxer Manny Pacquiao by using a gay slur and taking shots at Pacquiao’s Asian heritage.

Forbes magazine listed him second to Tiger Woods in its list of Richest and Powerful Sports Athletes of 2010 with earnings of $65 million.

Keith Kizer, executive director of the Nevada Athletic Commission, which regulates all contests and exhibitions of unarmed combat within the state, said he knows details of the incident only from what he has read at LVRJ.com.

“I know nothing more than that,” he said. “But we wouldn’t comment on any ongoing investigation.”