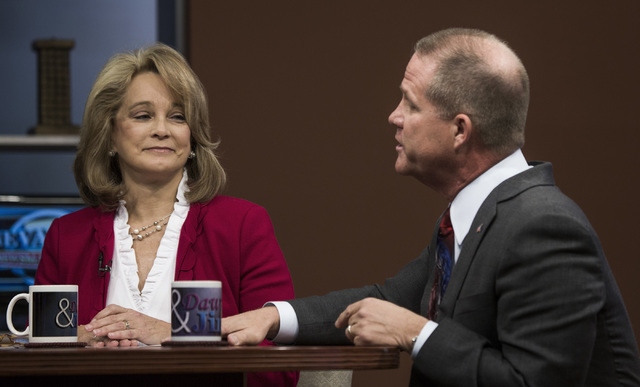 During the face-off May 12, Lowden called Hutchison a “personal injury” attorney, which apparently is an insult because some lawyers of that sort have sleazy reputations.

But Lowden persisted, saying Hutchison must have some experience in that area and had perhaps negotiated lower fees or payments for a client’s hospital bills, for example.

“No, I don’t employ personal injury lawyers,” he replied.

The problem is his firm, Hutchison &Steffen, has some lawyers who have done personal injury work.

Hutchison’s practice mainly deals with business law and commercial litigation, as well as trust and probate work, according to the main page of the firm’s website and according to Hutchison.

But look deeper and there’s a section that notes the law firm also handles “personal injury” cases. The names of eight attorneys are listed, including Hutchison’s partner, John Steffen.

“The Law Firm of Hutchison &Steffen offers a personal injury practice which carefully selects the representation of individuals who have suffered personal injuries or damages by motor vehicles, bad faith, wrongful death, and medical malpractice,” the website says. “The Firm has extensive experience in litigating major personal injury actions to successful conclusion.”

Aha! Lowden proclaimed, sending emails telling supporters Hutchison was caught in a lie on TV. Lowden said her opponent reminds her of the Jim Carrey character in the movie, “Liar, Liar.”

“Carrey plays the part of a lawyer whose young son makes a birthday wish that, for just one day, his father couldn’t tell a lie,” she wrote. “And the wish came true. I wish the same thing when it comes to my opponent, Mark Hutchison.”

After the debate, Lowden wrote, “Why should anyone believe anything else he says?”

Hutchison campaign spokeswoman Mari St. Martin said personal injury cases are a small part of his firm’s practice, and he does not handle such cases himself.

“Mark is not a personal injury lawyer,” St. Martin said in a statement. “His firm does not hire or have attorneys who are solely or primarily dedicated to that legal practice on behalf of plaintiffs. The firm has a broad legal practice, and some attorneys’ practices include on occasion representing clients in personal injury matters. But these matters are incidental and not the primary focus of their practice within the firm.”

Interestingly, the issue came up in the debate after Lowden was asked by “Nevada Newsmakers” host Sam Shad what voters should think about her $600,000 in unpaid bills from her failed 2010 U.S. Senate campaign.

Lowden said she has submitted a repayment plan to the Federal Election Commission and is waiting for approval. Under the plan, she would repay vendors about 45 cents on the dollar owed.

Hutchison said Lowden’s debt was “a matter between Ms. Lowden and the primary voters.”

Lowden said she was surprised Hutchison was making an issue out of her debts and attempts to negotiate lower repayments, something she said is “a common practice” of attorneys, especially those personal injury lawyers.

Popular GOP Gov. Brian Sandoval has no serious competition in his re-election campaign this year. Not from Republicans nor Democrats nor third parties or independents. So just how popular is Sandoval?

His campaign polled Nevada Republican voters May 6-8 and found 89 percent gave him a favorable rating; just 6 percent unfavorable. The rest apparently had no opinion. The full survey wasn’t made public.

Sandoval, who was elected on a promise not to raise taxes, annoyed some conservatives because he twice extended a $650 million package of taxes that were supposed to expire.

His poll shows little hard feelings. In fact, since his election in 2010, Sandoval has consistently polled well among Nevadans of all political types, often registering in the 60 percent range.

Another vestige of the Yucca Mountain Project has fallen by the wayside.

Last Friday, the Department of Energy stopped requiring nuclear power utilities to charge customers for building the nuclear waste repository taken off the drawing board four years ago.

The fee first levied in 1983 was tiny — one-tenth of a penny per kilowatt hour of electricity — but it raised more than $750 million a year. About $12 billion was spent on the Nevada site and still $37 billion remains, gathering interest.

The Obama administration continued collecting the fee even after it junked the Yucca site in 2010 without identifying a replacement, which prompted a lawsuit from utilities and state regulators. Government lawyers argued it was necessary to continue collecting the fees to pay for whatever strategy gets adopted to dispose of 70,000 tons and counting of highly radioactive fuel from nuclear power plants.

But the U.S. Court of Appeals for the District of Columbia didn’t buy it, and last November ordered the Department of Energy to stop collecting the fee. The DOE’s action last week carries out the court order.

“While we hope Congress and the federal government can jump-start our nation’s stalled nuclear-waste program, this action means consumers will get a break. That’s what this is all about,” said Colette Honorable, president of the National Association of Regulatory Utility Commissioners, one of the groups that sued.

A group called Independent Voters of Nevada met in Las Vegas this past weekend to develop strategies to win primary voting rights for nonpartisan voters.

A recent Gallup poll shows 42 percent of Americans consider themselves independent but in many states, including Nevada, independents are not allowed to vote in political party primaries.

As of the end of April there were 202,116 independent active voters registered in Nevada, or 17.6 percent of the total.

“Independent voters are not allowed to vote in the primary elections even though our taxpayer dollars help to fund them,” said Catana Barnes, founder of the group. “This is a reflection of how partisanship is built into the political process and we will be shining a spotlight on this flaw in our democracy.”

More than 13 million voters nationally will be ineligible to cast ballots in the first round of midterm elections because of their independent or unaffiliated status.

But 19 states hold open primaries in which there is no party registration, though voters must choose which primary in which to vote and cannot split their ticket among candidates with different partisan affiliations.

Seventeen states have closed primaries and do not allow independents to vote at all.

The group also noted that in 10 states there are more registered independent voters than Democrats or Republicans.