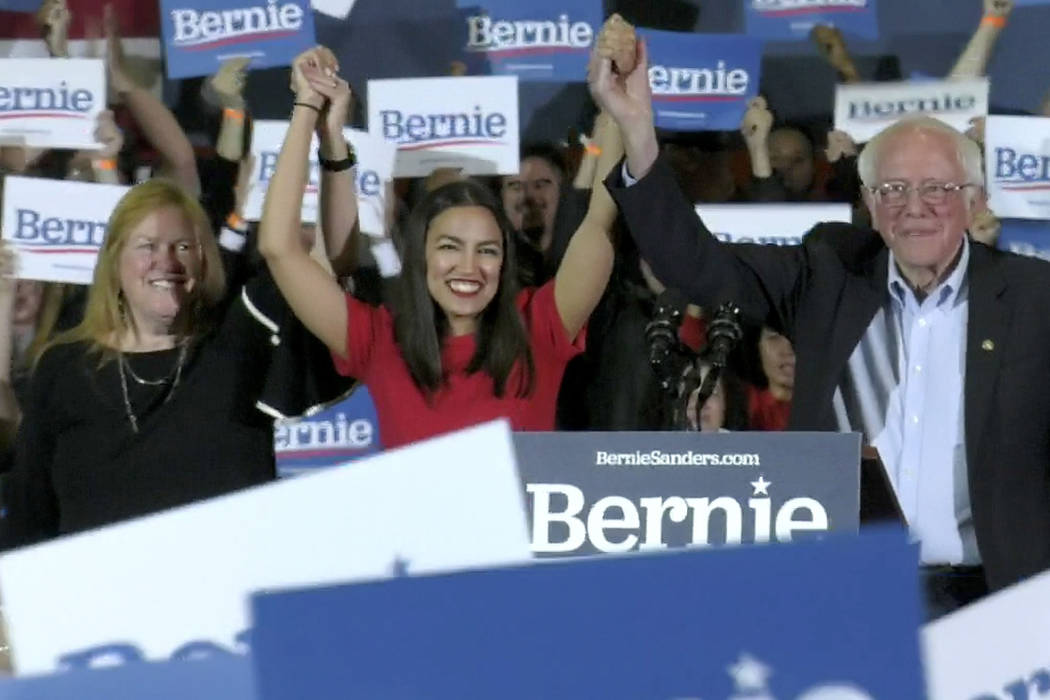 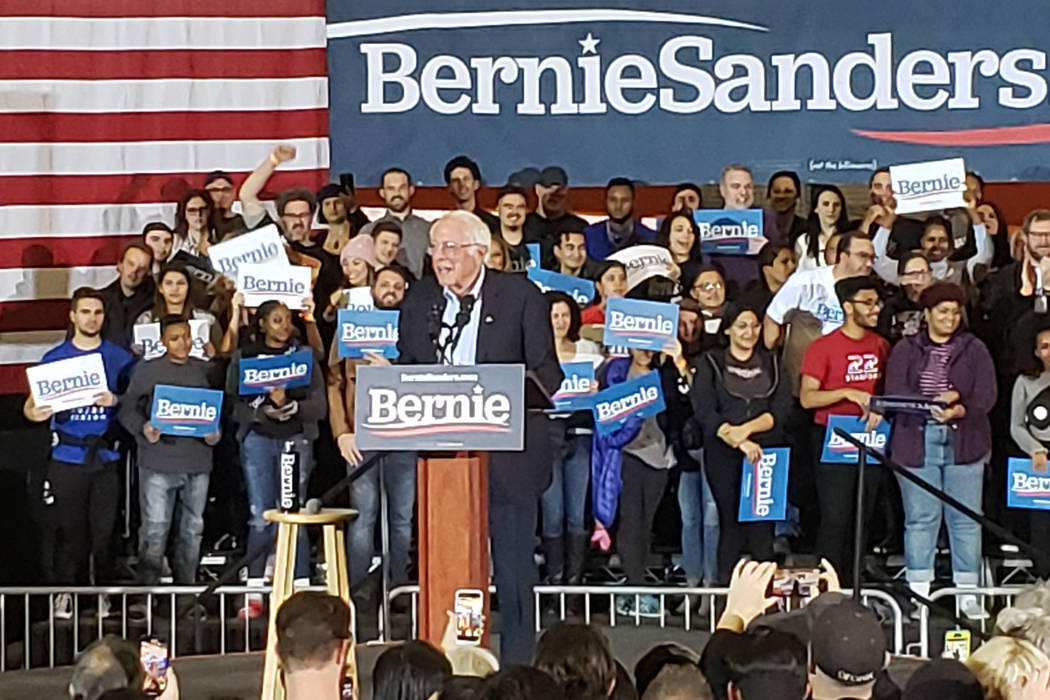 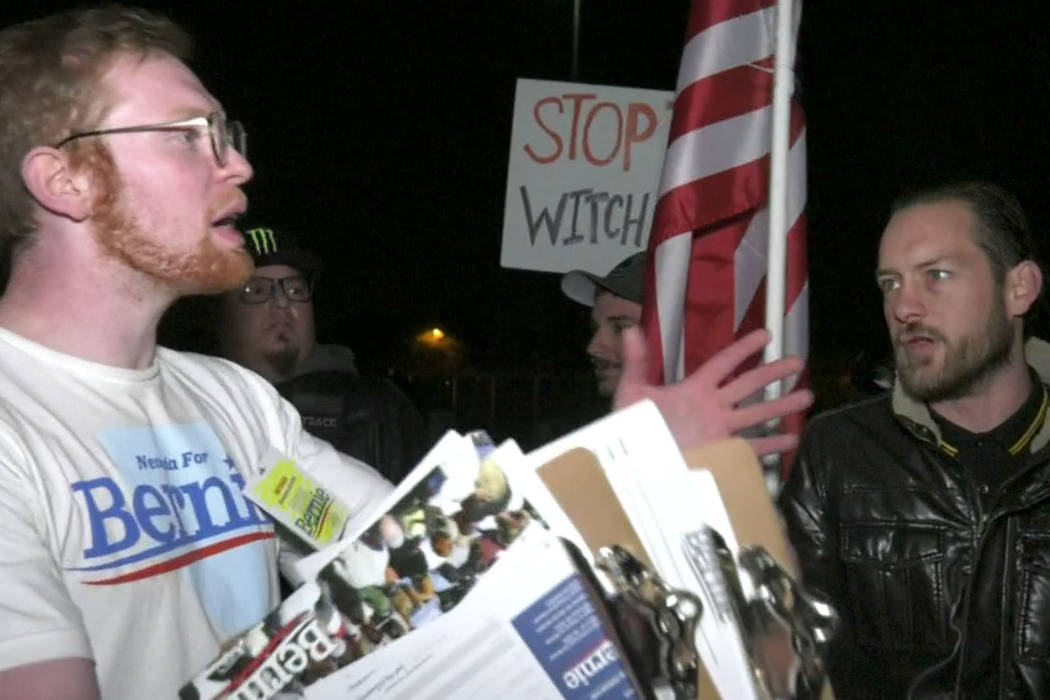 Democratic presidential hopeful Bernie Sanders returned to Las Vegas on Saturday for a massive public rally, where he and Rep. Alexandria Ocasio-Cortez, D-N.Y., punctuated the campaign’s usual progressive talking points with an impassioned plea for supporters to push Sanders over the top in Nevada’s Feb. 22 Democratic caucus.

Ocasio-Cortez, the well-known darling of young liberals and favorite target of conservatives, drew fierce applause during her first Nevada appearance on behalf of Sanders.

“Think about what you’re going to give to make that happen,” Ocasio-Cortez said. “We all have something to give — whether it’s five minutes or your life.”

Ocasio-Cortez’s speech drew much from Sanders’ favored campaign address. She called for universal health care, free secondary education, an end to predatory lending habits and wide-scale action on climate change. Like Sanders, she noted that these policies are often portrayed as “radical.”

“The reason it is seen as radical is because these policies are dangerous to the established order in the United States of America,” Ocasio-Cortez said.

She said this danger is felt by those in power because the “vast majority” of voters believe in “Medicare for All” and Sanders’ other signature platforms.

“And for that, I am happy to be a dangerous woman,” Ocasio-Cortez said to massive applause.

Sanders, as he often does, stuck to his unrolling of societal ills — wealth inequality, poverty, death and bankruptcy because of inadequate health insurance, environmental woes, a “broken and racist” criminal justice system — and his plans to fix these.

He went into extra detail on his plan to pay for Medicare for All, which would cost trillions of dollars — a favorite attack point for Sanders’ rivals in both parties.

Sanders said that, in addition to moving existing costs and expenditures around, every American would pay 4 percent of their income after the first $29,000. Someone making $60,000 per year would be taxed on $31,000 of that, for a total cost of about $1,200 per year for health care coverage.

His biggest surge of applause came from his pledge that no judge appointed under his presidency would be an opponent of abortion rights.

About a dozen protesters — some carrying American flags, other holding signs or flags for President Donald Trump — stood near the winding line to enter the rally. A few minutes before the event began, one man in line began to argue with a megaphone-wielding protester, and the two shoved one another briefly before separating.

Trump campaign spokesman Keith Schipper said in a statement that Sanders and Ocasio-Cortez “will drive caucus-goers away with their plans to decimate Nevada’s economy.” He said the duo’s “socialist fantasy” would further solidify support for Trump across Nevada.

Both Sanders and Ocasio-Cortez said Trump and his Republican allies will spend hundreds of millions of dollars to try to suppress voters and win re-election. Each stressed the importance of turning out new or disinterested voters.

Sanders went one step further, saying that an increased caucus turnout would lead to a Sanders victory over his Democratic rivals in Nevada.

“If there’s a large voter turnout on caucus day, we win,” Sanders said. “If it’s smaller, we lose. It’s as simple as that.”

He challenged his supporters to push back on skeptics or cynics who question why they “waste their time” at his rallies.

“Explain to them that you are sick and tired of hearing them complain about low wages, student debt, climate change,” Sanders said. “Tell them to stop complaining and get involved in the political process.”

Six Arizona counties must decide Monday whether to certify 2022 election results amid pressure from some Republicans not to officially approve a vote count.