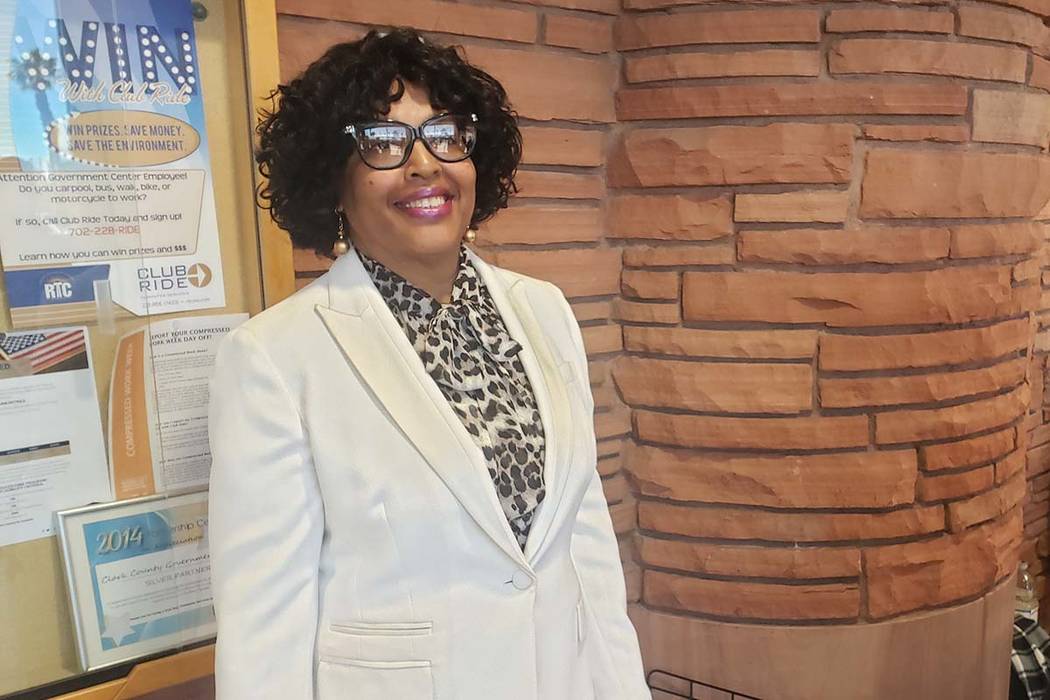 Former Nevada education official Marcia Washington will fill the vacancy left in the state Senate by the resignation of Kelvin Atkinson, the ex-Senate majority leader who pleaded guilty to federal wire fraud Monday.

On Friday, the Clark County Commission unanimously appointed Washington to serve in Senate District 4 through the remainder of Atkinson’s term, ending in November 2020. Washington, who counted negotiating and camaraderie-building as strengths, said she did not wish to run in 2020.

“I have always been committed to this community,” Washington told the commission, adding that she could make decisions to improve the lives of Nevadans in an interim role representing the north Las Vegas district.

Washington was buoyed by support from the powerful Culinary Union, which believed that her experience would serve the district well. She served on the state Board of Education, including a stint as president, between 2000 and 2008; was a longtime administrative assistant in the Clark County School District; and also was a Clark County fire inspector.

“Well, it’s been a long time. I haven’t been up (to Carson City) since 2008,” she told the Review-Journal. “So I have to get my feet wet again and start all over, start learning the process over again. So I’m looking forward to that.”

But the choice of Washington from a slate of 11 Democratic applicants also underscored the political test that candidates face in vying for seats in Carson City and the lack of appetite among commissioners to be the deciding vote.

It “doesn’t make sense to us,” Commissioner Lawrence Weekly said about the fact that the county board, not state lawmakers, is tasked with resolving vacancies up north. “This is a sad process.”

Most notably, the decision Friday cast a spotlight on what can occur when commissioners and state party leaders are not in harmony. Weekly had made a bid to first appoint Assemblywoman Dina Neal, but that motion failed when it garnered support only from commission Chairwoman Marilyn Kirkpatrick.

Instead, other commissioners — and eventually Weekly and Kirkpatrick — opted to follow the recommendation of the state Senate’s Democratic caucus, which had expressed concerns over a Neal departure from the Assembly.

Neal, the daughter of former state Sen. Joe Neal, who spoke on behalf of his daughter at the meeting, chairs the Assembly Committee on Taxation and the Ways and Means Subcommittee on Public Safety.

“I think at this critical juncture in the legislative session, we can’t afford to lose a chairwoman of such a powerful committee, and I would follow the guidance of leadership,” Commissioner Michael Naft said.

Yet for Neal, an assemblywoman since 2010, the commission’s decision marked the second instance of her own party standing in the way of her efforts to pivot into the state Senate. She had been asked in 2013 as a second-term lawmaker not to challenge Atkinson in the Senate race and obliged.

Neal told the Review-Journal that her application to the state Senate was not a rebuke of new Senate Majority Leader Nicole Cannizzaro, with whom she had spoken, but a message to constituents in her district that she wants to serve them.

Neal said she understood that she is needed as a senior member in the Assembly, particularly with the recent resignation of Assemblyman Mike Sprinkle amid sexual harassment claims. And she knows of the cards dealt to Cannizzaro.

“She got handed a pile of poo, and it’s not easy,” Neal said.

Kirkpatrick, who described Neal as a “very good friend,” suggested that the tough situation was twofold.

“At some point, we’ve got to quit telling people to step aside and wait their turn,” she said.