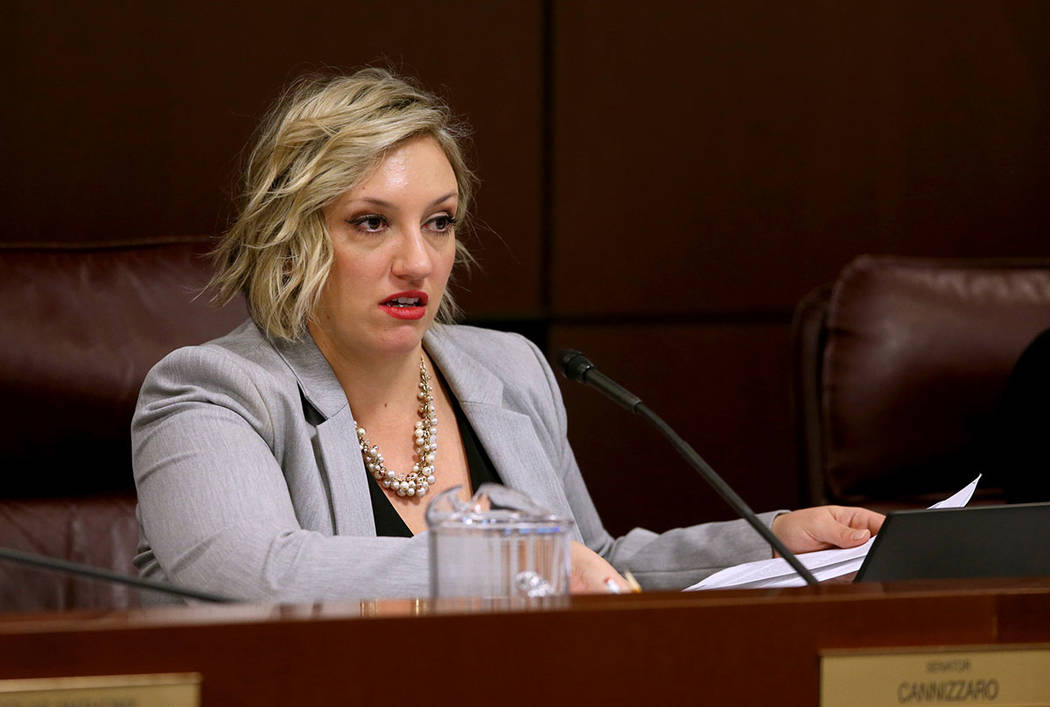 CARSON CITY — The session’s big lift on gun control — a much-amended bill that bans bump stocks, toughens rules for safe gun storage and authorizes police to seize weapons from people who might pose harm — passed the Senate Friday after a 75-day zigzag through the Legislature and now moves back to the Assembly for agreement on changes.

That vote, along with Senate approval of two measures to hike the minimum wage, the governor’s signing of an abortion law cleanup, and other new laws dealing with sexual assault crimes and protection orders, highlighted action on the Legislature’s 117th day of session. Three days remain until final adjournment.

With Democrats controlling the Senate, the chamber’s 12-8 party-line vote on Assembly Bill 291, the wide-ranging gun measure, went as expected. As first introduced, the bill, the session’s most direct legislative response to the Oct. 1, 2017, mass shooting in Las Vegas that killed 58 people, also gave local governments authority to pass stricter gun control measures in their jurisdictions.

The Assembly approved that version of the bill, also on party lines, on April 23. But amendments on the Senate side removed the provision allowing for local gun laws. It added so-called extreme risk or “red flag” language, under which a family member or law enforcement officer could seek a protection order to take weapons away from someone deemed a threat to themselves or others.

The red flag provisions of the bill accounted for most of the 45-minute floor debate, with opponents decrying the potential confiscation of property from someone without adequate due process and inadequate attention in the bill toward addressing mental health issues.

The amended bill “does not deal with mental illness,” said Sen. Keith Pickard, R-Henderson. “It deals with allegations of a third party that may or may not be diagnosed as mental illness.”

In response, Sen. Dallas Harris, D-Las Vegas, the floor sponsor, recited a list of combative altercations and other warning signs that preceded a mass shooter’s 2018 school attack in Parkland, Fla.

That shooting “was a preventable tragedy,” she said. “That is what this bill addresses.”

“This bill does not just take away a firearm away from someone,” she said. “It puts into place procedures and reasons why this is necessary.”

Because of the Senate amendments, the bill now returns to the Assembly for a vote on concurrence. Assemblywoman Sandra Jauregui, D-Las Vegas, a survivor of the October 2017 Las Vegas shooting, is the bill’s prime sponsor.

Gov. Steve Sisolak signed a bill Friday to formally decriminalize abortions in Nevada and tweak the state’s informed consent laws — a move that comes as a growing number of states have moved to place more restrictions on women’s access to abortions.

Called the Trust Nevada Women Act, Senate Bill 179 removes many of the criminal penalties for abortions still on the books, some of which date back more than a century, and changes the laws dealing with the type of information doctors are required to give women considering the procedure — such as removing the requirement for a doctor to provide information to the woman about the emotional ramifications of an abortion or asking about her age or if she is married.

“The Trust Nevada Women Act sends a clear message to women in this state that we trust them to make their own health care decisions,” the bill’s sponsor Sen. Yvanna Cancela, D-Las Vegas, said in a statement.

“As the first-female majority legislature in our nation’s history, it was important to reaffirm our belief that women can make their own choices. As women’s rights across the country are being systematically dismantled by state governments and federal courts, Nevada is leading the way forward instead of turning the clock back,” Cancela added.

The signing comes as numerous states have passed bills this year to limit abortions, including the law recently signed by the governor of Alabama that outright bans the procedure unless the mother’s health is at risk. Some of those laws, including Alabama’s, are expected to be challenged in court in what could ultimately lead to the now-conservative leaning U.S. Supreme Court revisiting Roe v. Wade, the 1973 decision that legalized abortion in the United States.

The Senate approved two measures aimed at raising the state minimum wage. Assembly Bill 456 raises it to $12 in stages by 2024, and a joint resolution, AJR 10, takes it from there, proposing a constitutional amendment that ties increases after 2024 to the federal minimum wage and allowing the Legislature to raise it. It would go to voters if approved by lawmakers this year and in the 2021 legislative session. AB456 now heads to the governor.

Despite significant revisions to an omnibus criminal justice reform bill made to win law enforcement support, many of those agencies remained firmly opposed to the bill Friday in its second legislative hearing. Their opposition drew a measured rebuke from Assemblyman Steve Yeager, D-Las Vegas, the bill sponsor.

“Almost every change you see in this bill, from the first version to now, has been at the request of the District Attorneys Association,” Yeager said at the end of the hearing. “And here we are today, asking for additional substantial revisions to the bill.”

Jon Jones, a chief deputy Clark County district attorney and the agency’s lobbyist, noted several issues the office has with the bill, including changes to probation, the increased felony thresholds for drug trafficking weights, and even how certain crimes, such as home burglaries, are characterized in the bill.

“There is nothing non-violent about a residential burglary. Nothing,” Jones told the Senate Judiciary Committee. But, Jones added, the crime is often referred to as a non-violent.“If you can’t feel safe in your home, where do you feel safe?” he said.

Other agencies concurred. The committee took no action on the bill Friday. It passed the Assembly earlier this month on a party-line 28-12 vote.

■The per-pupil funding figure for the Clark County School District in 2019-2020 would be $6,067 under the proposed K-12 budget bill laid out for legislative committees Friday. The bill has yet to be formally introduced, but under the state constitution must be passed before any other budget bill.

■Without fanfare, Gov. Sisolak on Thursday signed Senate Bill 224, which redacts information on pension benefits for public employees other than their name and amount of pension. Other information, including retirement date, years in government service and last public employer, would be confidential.