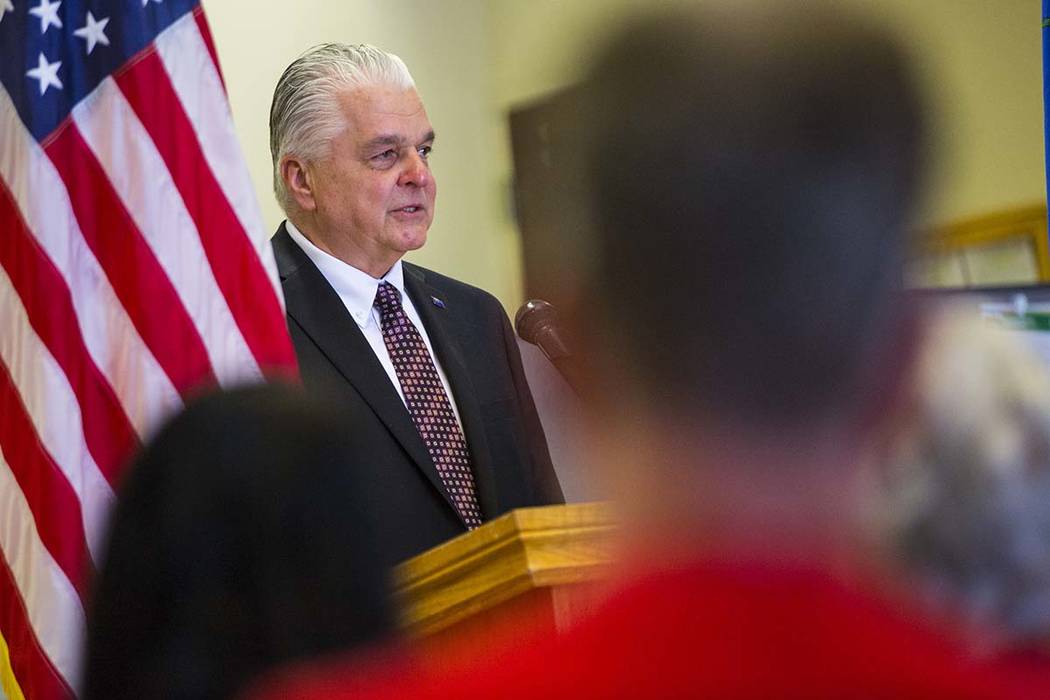 Gov. Steve Sisolak speaks before signing a trio of bills, including AB291, which includes a variety of gun control regulations, including banning bump stocks, at the Sawyer Building in Las Vegas on Friday, June 14, 2019. (Chase Stevens/Las Vegas Review-Journal) @csstevensphoto

Saving some of the biggest for last, Gov. Steve Sisolak signed major pieces of legislation Friday, including the new K-12 funding formula, sweeping criminal justice reform, compensation for the wrongfully convicted and more.

Friday marked the deadline for Sisolak to sign bills into law. In total, the governor has signed more than 600 bills passed by the Legislature this year, while vetoing just three: one that would have joined Nevada to a compact to elect the president by national popular vote, another dealing with limousines and independent contractors and a third that would have established a legislative committee on tax incentives that would have investigated whether companies that get benefits from the state were paying required wages and offering health benefits.

Here’s a look at what the governor signed Friday:

Sisolak signed Senate Bill 543, which replaces Nevada’s 52-year-old public education funding formula for K-12 school with a new one that seeks to streamline the funding process while adding transparency.

Sen. Joyce Woodhouse, D-Henderson, one of the architects of the new formula, said during a signing ceremony that the new formula is “the first step in addressing the funding needs for schools and students in the state of Nevada.”

The new formula will allocate more funding to follow students who are in special education or gifted and talented programs, those at or near the poverty line, or those learning English.

“It’s clear that Nevada’s current funding formula, the Nevada Plan, is no longer serving the needs of our students, of our educators, and it hasn’t been for many years,” Sisolak said ahead of signing the bill.

The new formula will be fully implemented in 2021.

Sisolak also signed Assembly Bill 289, which was sponsored by late Assemblyman Tyrone Thompson, D-North Las Vegas, who died during the session on May 4. The bill puts an additional $63 million into the state’s Read-by-3 program over the next two years, and also makes it so that parents will have to sign off before their children are held back in third grade because they’re not reading at grade level.

AB 236 — among many other things — will allow some geriatric prisoners to be released to house arrest, increases the amount of drugs that trigger felony possession and trafficking charges, and allow for earlier parole for some low-level offenses.

By helping reduce future prison costs, AB236 is expected to save the state $550 million over the next decade.

Sisolak also signed Assembly Bill 267, which will allow people who are exonerated or deemed wrongfully convicted to sue the state for damages.

Approximately 2,400 people are listed on the national registry of exonerations — 13 of whom are from Nevada. That includes DeMarlo Berry, a Las Vegas man released from prison in 2017 after serving 22 years for a 1994 murder he did not commit.

Sisolak signed Senate Bill 538, which creates the Office for New Americans. The office was a promise Sisolak made during his state of the state speech earlier this year.

The governor’s staff has said that the new office will serve as an information clearinghouse for immigrants.

Sisolak signed Assembly Bill 345, which will allow for same-day voter registration and implements automatic voter registration, which Nevada voters approved on the ballot in 2018. The new law also allows county clerks to extend the hours of early voting.