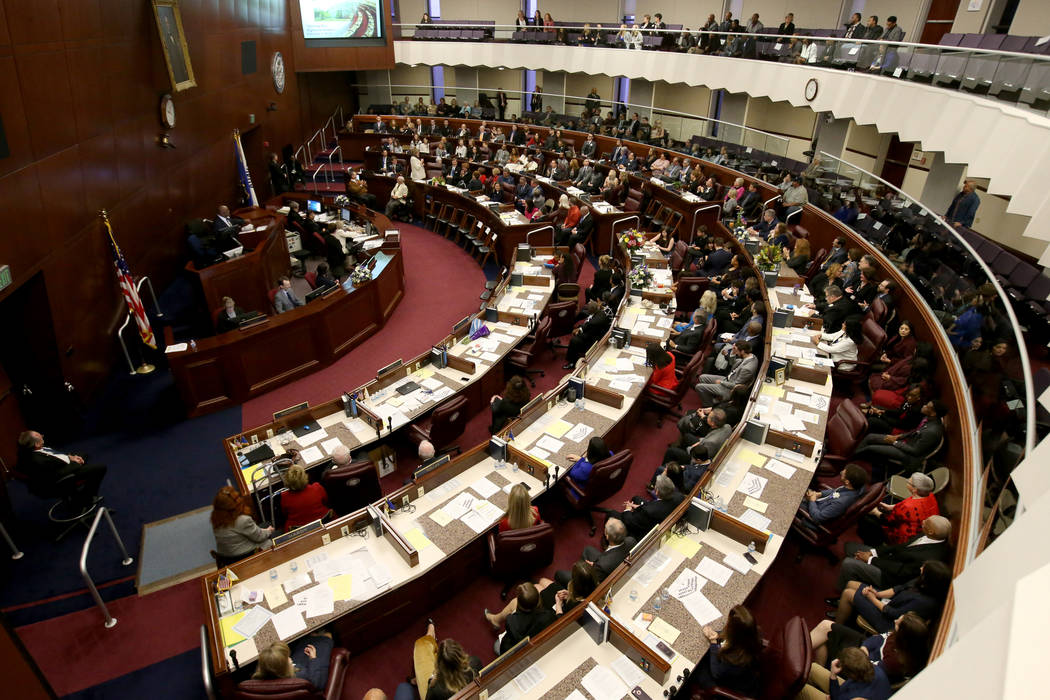 Speaker Jason Frierson, D-Las Vegas, presides over the Assembly the Legislative Building in Carson City on the first day of the 80th session of the Nevada Legislature Monday, Feb. 4, 2019. (K.M. Cannon/Las Vegas Review-Journal)

CARSON CITY — Gun control legislation, which made its first appearance early in this legislative session, returns to the Legislature first thing this week with two bills set to be heard before a joint Senate-Assembly committee hearing Monday.

Assembly Bill 153 would make it a crime to store or leave a firearm where a child could gain access to it. A more wide-ranging gun control bill, Assembly Bill 291, has three main goals: It would add a state prohibition on the use of bump stocks or other devices that speed up the rate of fire of a semi-automatic weapon. A federal bump stock ban went into effect last week.

The bill also would reduce the permissible level of blood alcohol for a person with a gun to from 0.10 percent to 0.08 percent, the same limit for driving under the influence. Finally, it would lift the restriction that bars local governments from writing their own gun laws.

Also Monday, the Assembly Government Affairs Committee takes a look at Assembly Bill 397, which would allow the state Equal Rights Commission to seek the removal from office of a public official found guilty by the commission of sexual harassment.

The Assembly Taxation Committee on Tuesday hears Assembly Bill 466, which would create a four-year pilot program for marijuana-related businesses to conduct cashless financial transactions, such as paying state and local taxes.

Such businesses do not currently have access to regular banking systems.

Assembly Bill 431, before the Assembly Judiciary Committee Wednesday, would allow immediate restoration of the right to vote to ex-felons released from prison or discharged from parole or probation. Current law delays restoration of voting rights in cases of more serious crimes.

A similar Senate measure, Senate Bill 326, is before the Senate Judiciary Committee on Thursday.

Also Wednesday, the Assembly Committee on Natural Resources, Agriculture, and Mining hears Assembly Bill 473, which would bar leg-hold traps in the state, and Assembly Bill 479, which would bar possession, importation, breeding or selling of dangerous wild animals, with some exceptions and a grandfather clause for existing cases. The list of prohibited species includes elephants, big cats, alligators, wolves, bears, non-indigenous poisonous snakes, and primates.