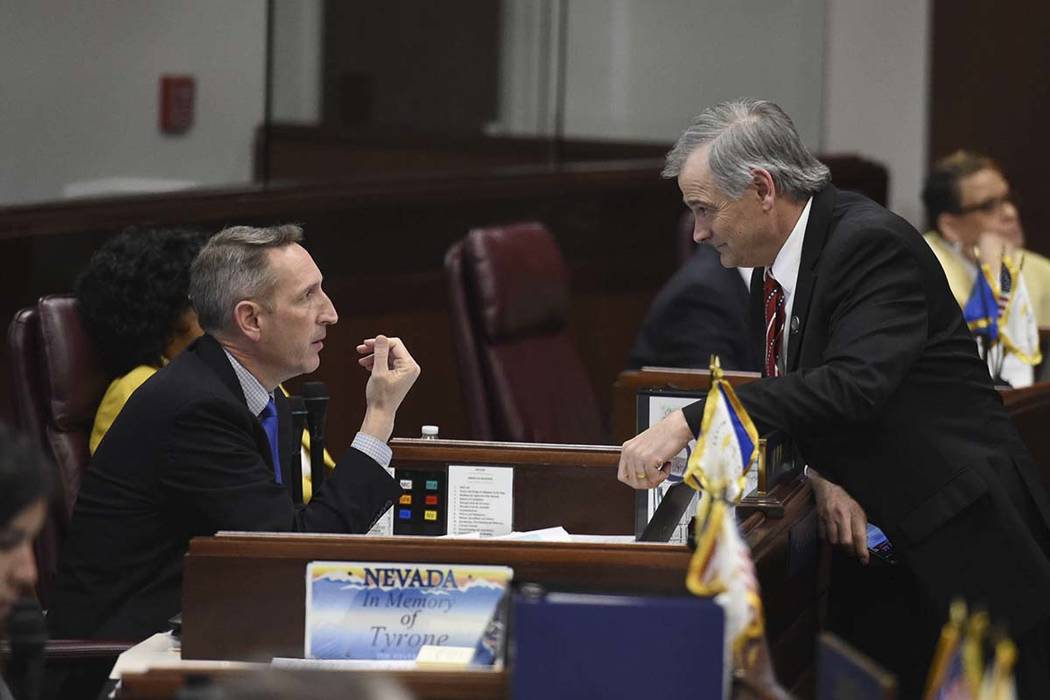 Nevada State Sens. Scott Hammond, left, and James Settelmeyer chat during a break on the Senate floor on the last day of the 2019 Nevada Legislative session on Monday, June 3, 2019, in Carson City. (Andy Barron/Reno Gazette-Journal via AP)

CARSON CITY — A public records reform bill passed the Nevada Legislature in the last few hours of the 2019 session, following a roller coaster of hearings and amendments.

The bill, which spent most of the session in the Senate Finance Committee, was rescued in the closing days of the session and heard in the Assembly Government Affairs Committee on Monday morning.

The Assembly amendment provides local govermnments and state government agencies are subject to civil penalties if they willfully violate the law. It also removes a specific list of things that government officials would have been required to do to help requesters get access to records, but leaves intact a requirement that governments make “reasonable efforts” to help.

Attorney Maggie McLetchie, who has represented the Review-Journal in public records battles, praised the action.

“This bill is an important step toward adding more teeth to Nevada’s important public records law,” McLetchie said. “It requires promptness and cooperation from government when citizens seek records from their government. While it seems absurd that these concepts were controversial, overcoming the power of taxpayer-funded lobbyists has been an uphill battle.”

In other action on the final day of the Legislature:

■ The Senate accepted a conference report on Assembly Bill 70. The bill, sought by the attorney general’s office, would clarify the state’s Open Meeting Law. It expands the time in which the attorney general can investigate violations of the law and adds graduated fines for public officials who knowingly participate in meetings that violate the law.

■ Both houses accepted a conference report on the much-delayed Assembly Bill 139, which prohibits people younger than 16 years old from getting married. Under the bill, 17-year-olds can marry with permission from parents or guardians if a judge makes certain findings after a hearing.

■ Both houses also agreed on Assembly Bill 309, the most prominent feature of which is to authorize county commissions in Nevada to impose a quarter-cent sales tax to fund education, affordable housing and to combat homelessness. Any vote to impose the tax would have to be approved by two-thirds majority or by a vote of the people.

■ The Senate approved a sweeping criminal justice reform bill aimed at reducing Nevada’s prison population. Assembly Bill 236, which runs 152 pages, was amended four times during a contentious series of hearings all session long. It passed on a party-line vote at the end of May in the Assembly, but won approval in the Senate with a bipartisan vote of 19-2.

■ The Assembly approved Senate Joint Resolution 8, which would amend the Nevada Constitution to provide for equal rights regardless of “… race, color, creed, sex, sexual orientation, gender identity or expression, age, disability, ancestry or national origin.” The measure will return before the 2021 Legislature and, if approved again, will go before voters in 2022.

The original version of the bill unveiled in the Senate on May 13 would establish a “base funding amount” for all of Nevada’s 450,000 K-12 students. It would also shift more money toward students in special education, gifted and talented programs, those near the poverty level and those learning English, no matter which school they attend. It also adds more transparency to education funding.

The new formula would run simultaneously with the current one for the next two fiscal years in order to ensure that it works as planned.

An amendment under discussion as the session came to a close would give more authority to the state Education Department in deciding how the money is directed.