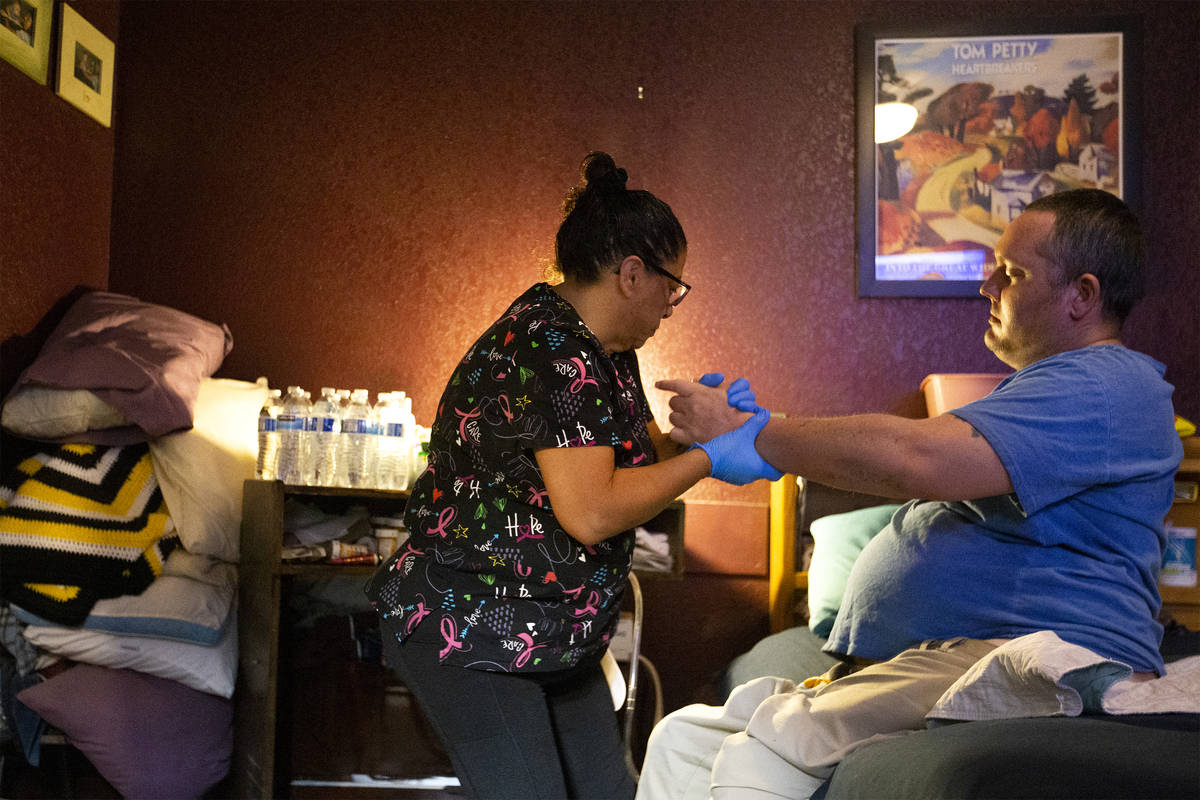 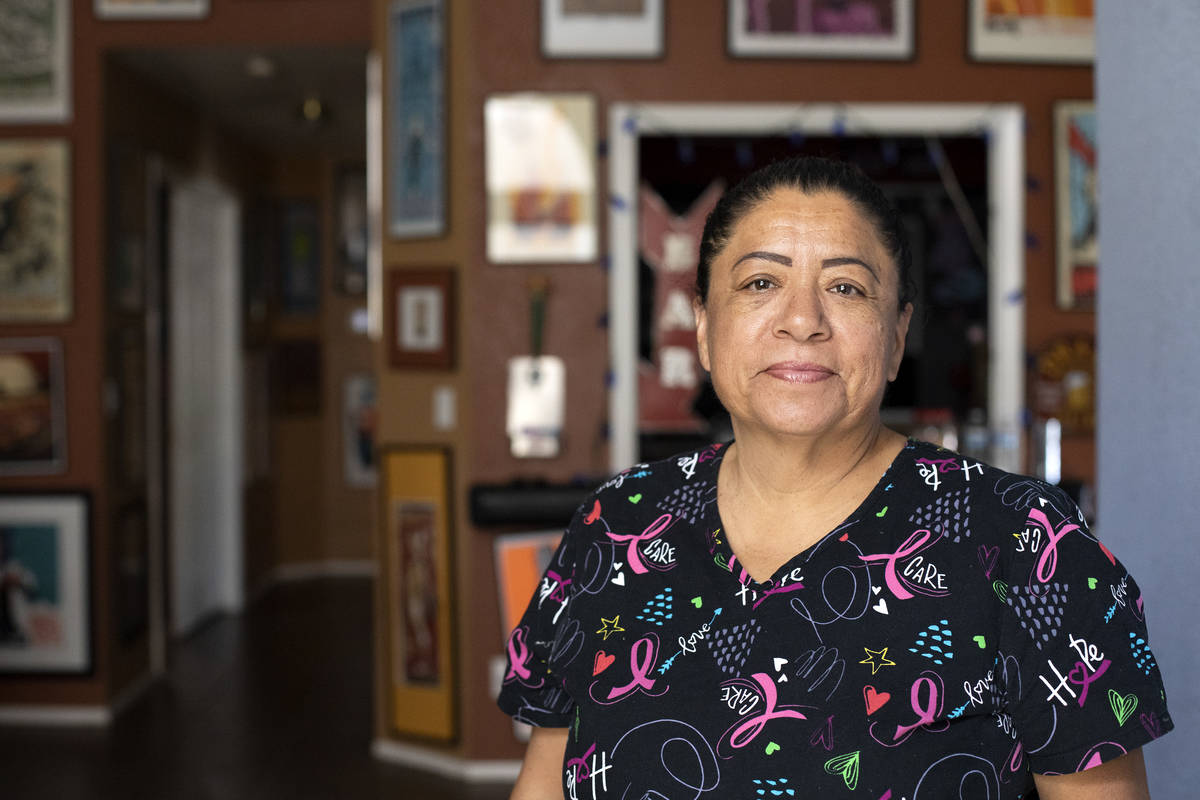 Irma Nuñez a personal care aid, at her client's home on Wednesday, April 14, 2021, in Las Vegas. Nuñez makes $10 an hour and is not reimbursed for gas mileage. She said she spends $30 every other day on gas. (Ellen Schmidt/Las Vegas Review-Journal) @ellenschmidttt 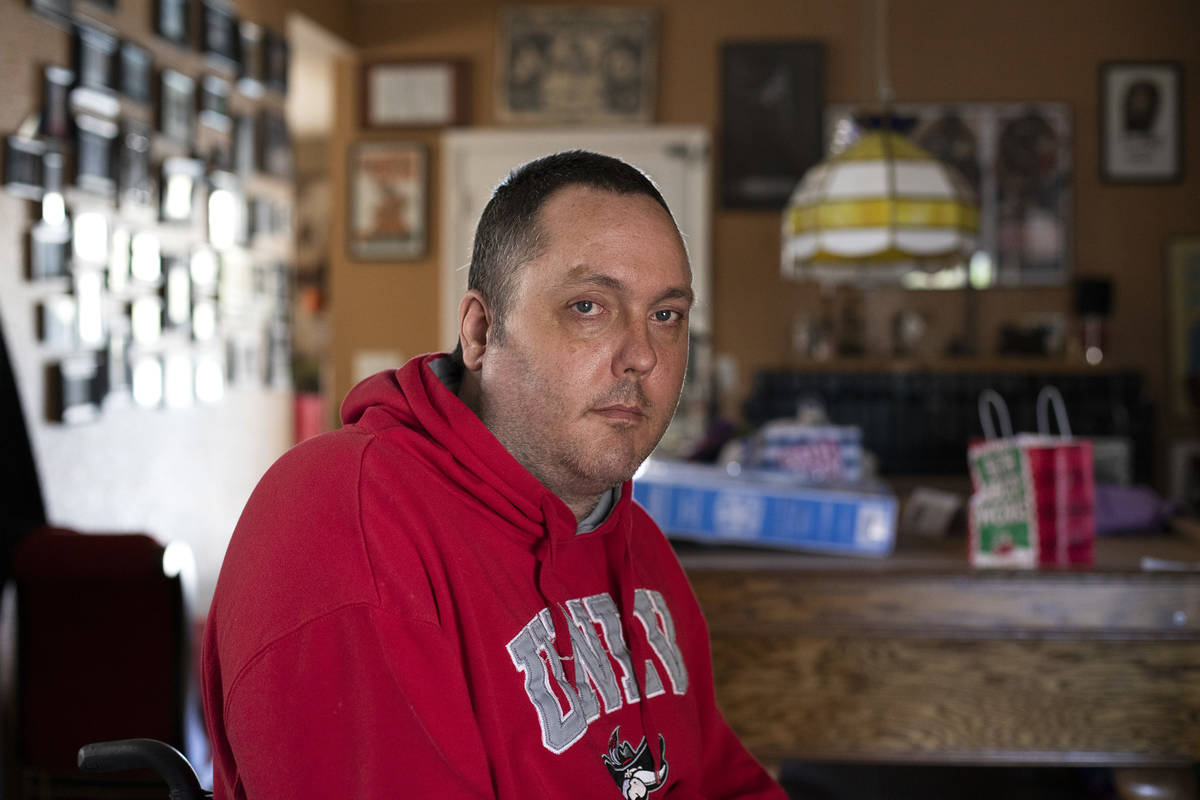 Thomas Draa, a client of personal care aid Irma Nuñez at his home on Wednesday, April 14, 2021, in Las Vegas. Draa became quadriplegic after a car accident in 2005. Nuñez visits his house every day to help him in and out of his wheelchair. Draa, a high school teacher, needs assistance to be able to log on for school in the morning. (Ellen Schmidt/Las Vegas Review-Journal) @ellenschmidttt 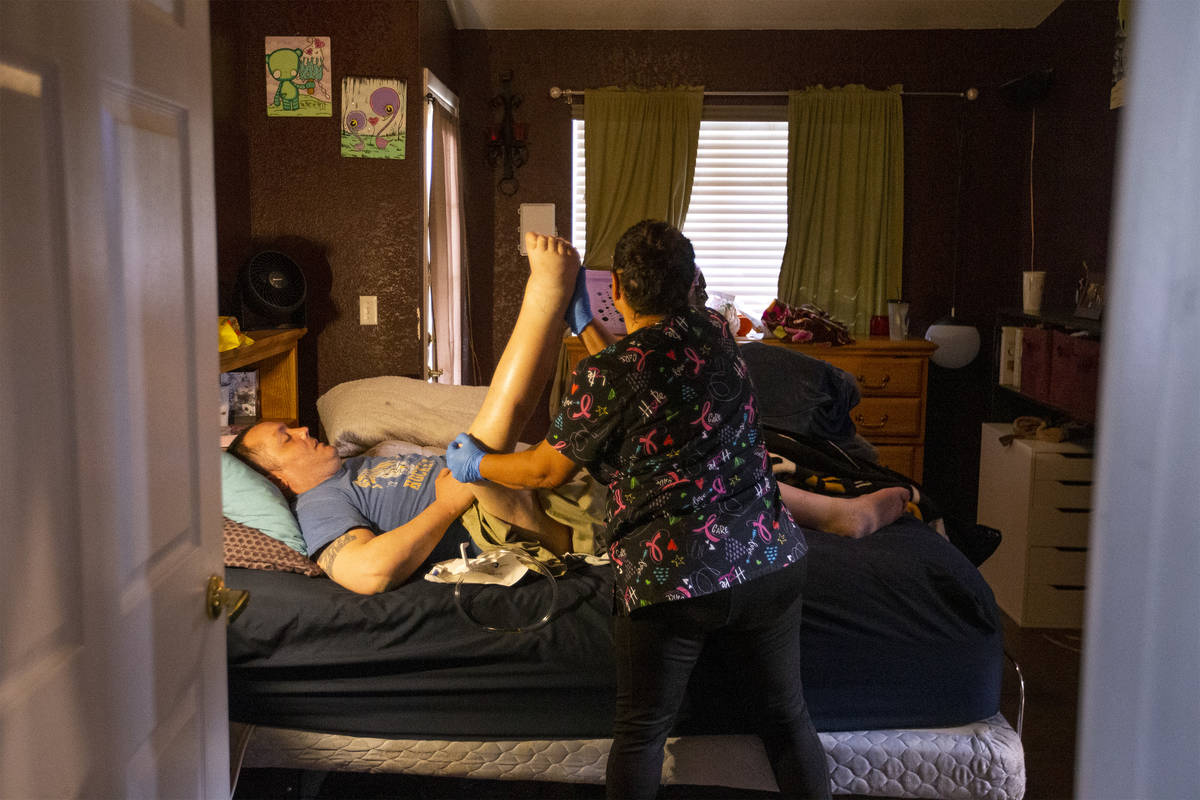 Personal care aid Irma Nuñez stretches her client Thomas Draa's legs on Wednesday, April 14, 2021, in Las Vegas. Draa, who is quadriplegic, requires Nuñez's help every day. "Getting in and out of bed in the morning, care like that, that's the biggest thing that makes me be able to still have a job and be part of society," said Draa. (Ellen Schmidt/Las Vegas Review-Journal) @ellenschmidttt 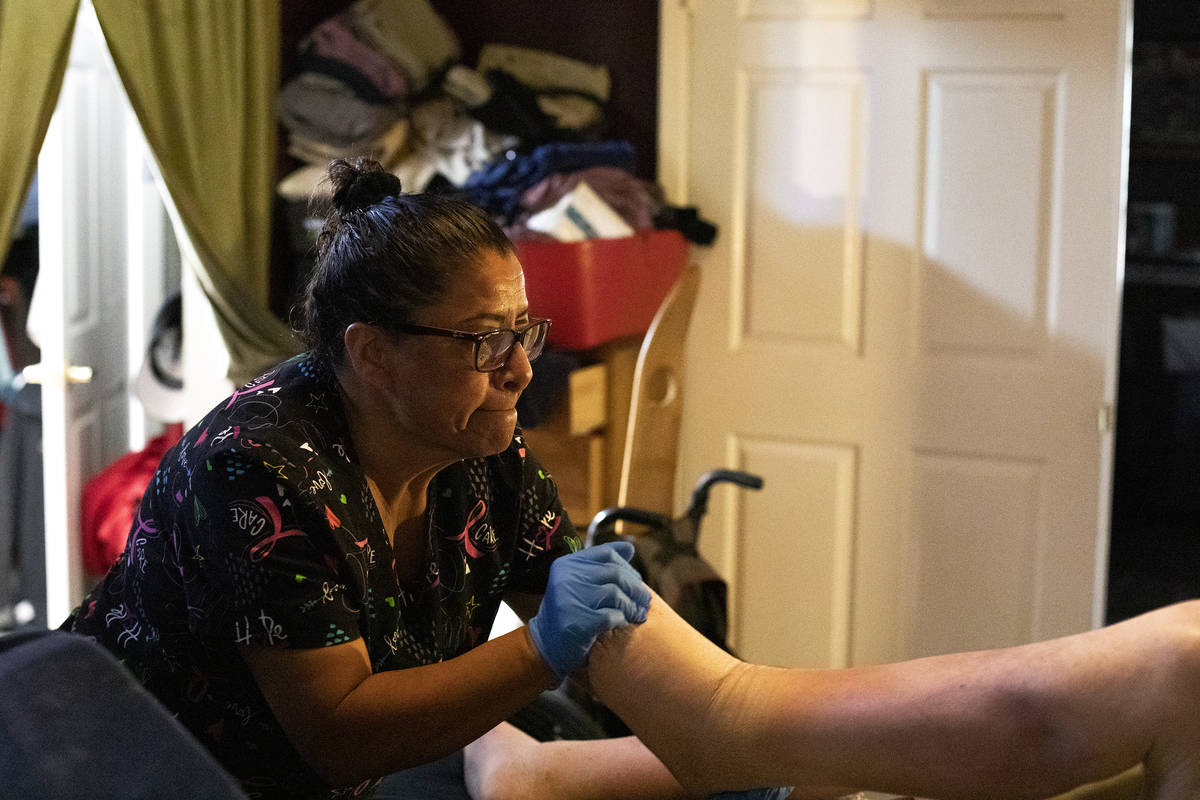 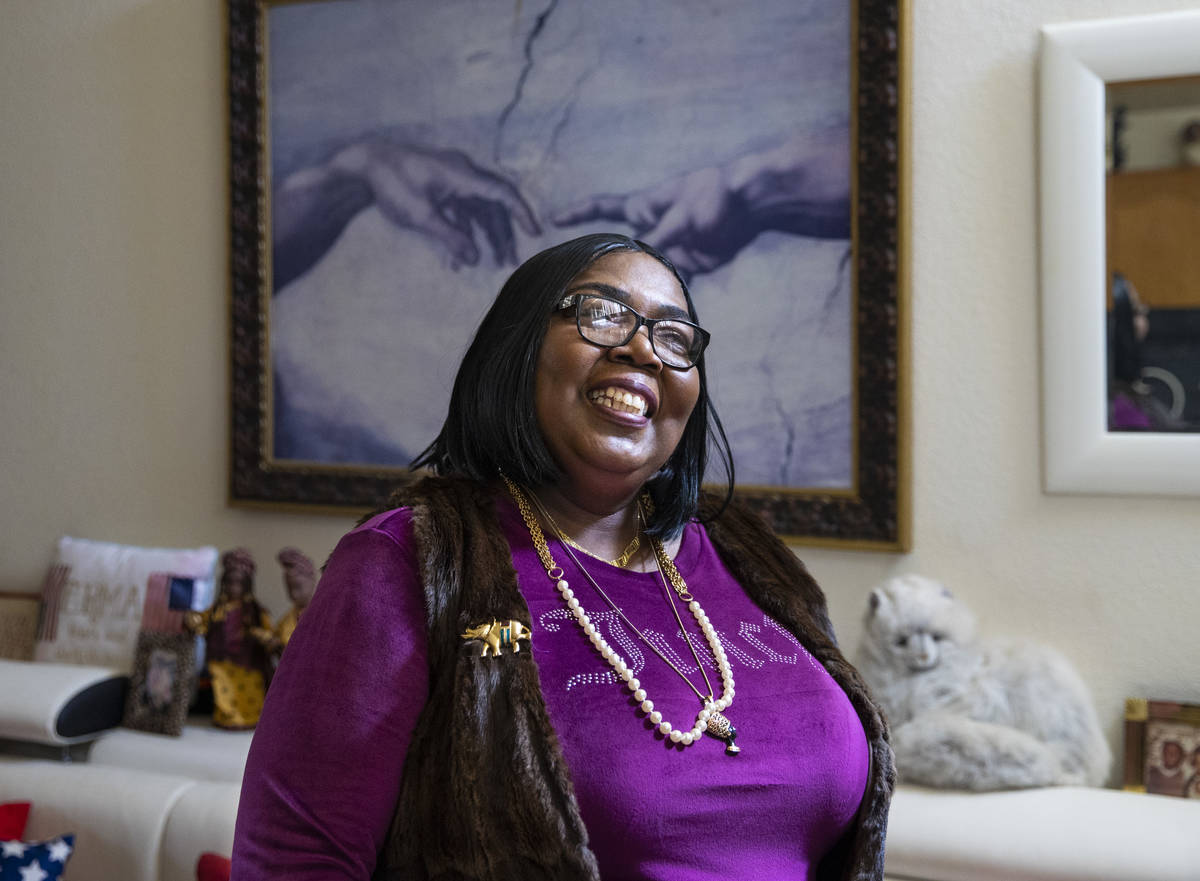 Twice a day, Irma Nuñez drives her old blue Toyota to the home of a quadriplegic patient she has cared for over the last eight years, one of many stops she will make before her long day is done.

She arrives at Thomas Draa’s home at 4:30 a.m. and helps get him out of bed, get dressed for work and stretch his legs.

And for eight years, Nuñez has made the same wage: $10 an hour.

“I’m willing to come out and do the service for people, even though the pay is not good,” said Nuñez, a certified personal care assistant. “I like helping people. That’s what I like, you know, I like my job. And since I know how to do it, it makes it easy for me.”

Personal care aides provide a crucial lifeline to their housebound clients, many of whom are elderly or disabled. In addition to performing duties such as grocery shopping and providing companionship, they help clients with essential daily activities like bathing, eating and cooking.

Nuñez is one of the nearly 13,000 such home care workers in Nevada. She’s also a member of the Service Employees International Union, which is fighting for a bill that advocates for more rights for such workers and their clients.

Senate Bill 340, also known as the Nevada Home Care Workforce Safety and Standards Act, was passed by the Senate Committee on Health and Human Services before the April 9 deadline for a bill to be passed by the original committee to which it was referred.

The legislation would create a board of state health officials, disability advocates, workers and agency owners to examine the state of home care in Nevada and issue recommendations to improve the quality of care and the working conditions.

The median hourly wage for personal care aides in the state is $11.07, according to the union.

The bill also would enable workers to seek training and benefits such as paid sick leave, protective equipment and health care coverage to address the shortage of quality care that seniors and people with disabilities are facing in Nevada.

“The pandemic has called attention to a dire situation that is putting workers, seniors and people with disabilities at risk,” Neal said. “Nevada families can’t wait anymore.”

The bill is close to Neal’s heart.

Before her father, trailblazing state Sen. Joe Neal, died on Dec. 31, he was cared for by a home care worker whom Dina Neal calls “Miss Tina.” She helped the family bathe her father — who was Nevada’s first Black state senator and served more than three decades in the Legislature — as well as get his pajamas on and assist him to and from his chair.

“Miss Tina became a part of our lives,” Dina Neal told health care workers at a rally in support of the bill. “We needed to build that rapport with her because she was there to help us, but we needed her. We needed her more than anything because there were things that we were too tired to do. We couldn’t do it. I have the right passion to fight for you.”

Most of the funding for home care services in Nevada comes from taxpayer dollars flowing through the state’s Medicaid program.

Instead, the new rate is $16.52 per hour. That means the agency that lines up clients for her is making nearly two-thirds as much as Nuñez earns for providing the care.

The SEIU has said that this is driving home care agencies out of the state at the same time demand for workers is increasing.

Those who remain in the industry are often barely able to get by.

One in five home care workers in Nevada is uninsured, and nearly one-third are on Medicaid themselves, according to a Guinn Center for Policy Priorities study on personal care aid workers released in September. About half are middle-aged or older and about 84 percent are women.

Calls to the Personal Care Association of Nevada, which represents many of the agencies that supply in-home care, for comment on the bill were not returned.

But Connie McMullen, who represents the association, told members of the Senate committee that the creation of the home care employment board was unnecessary.

There are already statutes in place to accomplish what the bill is aimed at achieving, she said, adding that grievances should be investigated and reported to the state to force a company to comply with existing regulations and wages.

“Nevada is just beginning to recover from a pandemic that has put unbearable strain on many small businesses in the state, not to mention people in need of services who have found themselves unemployed,” she wrote in a letter. “SB 340 will only drive up costs for Medicaid services and Nevada.”

She pointed out that the state cannot afford to increase funds: A 3.3 percent reimbursement increase was approved in the 2019 session, but rolled back in the special session in July called to cut budgets in the wake of the COVID-19 pandemic.

But people on the front lines say the bill is vital to keep more home health and personal care workers from fleeing to other states.

“I’m thinking about the next generation of home care workers. Who’s going to take care of me?” said Henderson, who often ministers to and performs gospel music for her clients. “I consider home care work to be God’s work. It takes a special type of individual to do it.”

For Farren Epstein, who is a paid caregiver for her 36-year-old son, Medicaid coverage is crucial, but it’s not enough. Her son, who is paralyzed from the chest down, needs 24-hour care, but he only gets 26.75 hours a week covered by Medicaid.

“If my son’s admitted to the hospital, even though I need to be there, I don’t get paid. There are never any vacation days,” she said. “I constantly feel like I’m living in a pressure cooker because I don’t make a living wage, and he doesn’t get enough hours.”

‘My life’s in her hands’

On the same day she woke him up and prepped him for his workday, Nuñez returned to Draa’s home around 2 p.m. to help him get some rest and prepare his sleeping space for the night. His cockatiel, “Old Man,” chirped in the other room.

Wearing blue gloves, she held onto his chair and used it as a platform to help hoist him onto the bed.

“One, two, three,” she said before lifting his legs.

“My pillow got stuck on my hand,” he said, prompting his caregiver to help him back up and start the process over again.

Both Nuñez and Draa both have been vaccinated for COVID-19, which removed one major worry from their close-quarters relationship.

Draa, 47, a biology and geology teacher who teaches at Desert Oasis High School, held virtual classes from his home in the morning. He hired Nuñez after he broke his neck in a car accident and needed help to be able to continue living in his house.

Draa said that he has tried out other home health care workers, but Nuñez was the perfect fit because she always has a smile on her face and is a chameleon in how she adapts to the needs of all her clients. She knows when he’s depressed and knows when he needs someone to talk to.

“My life’s in her hands every day,” he said. “It makes my life functional again.”