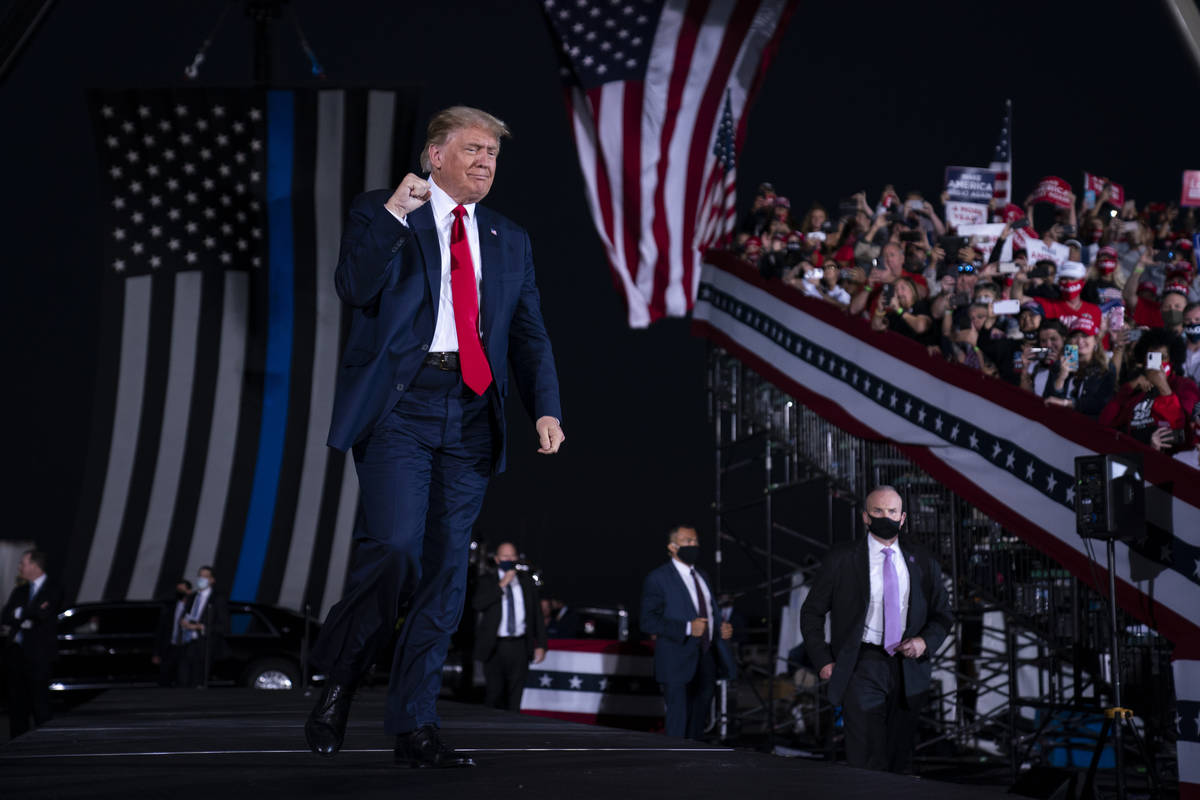 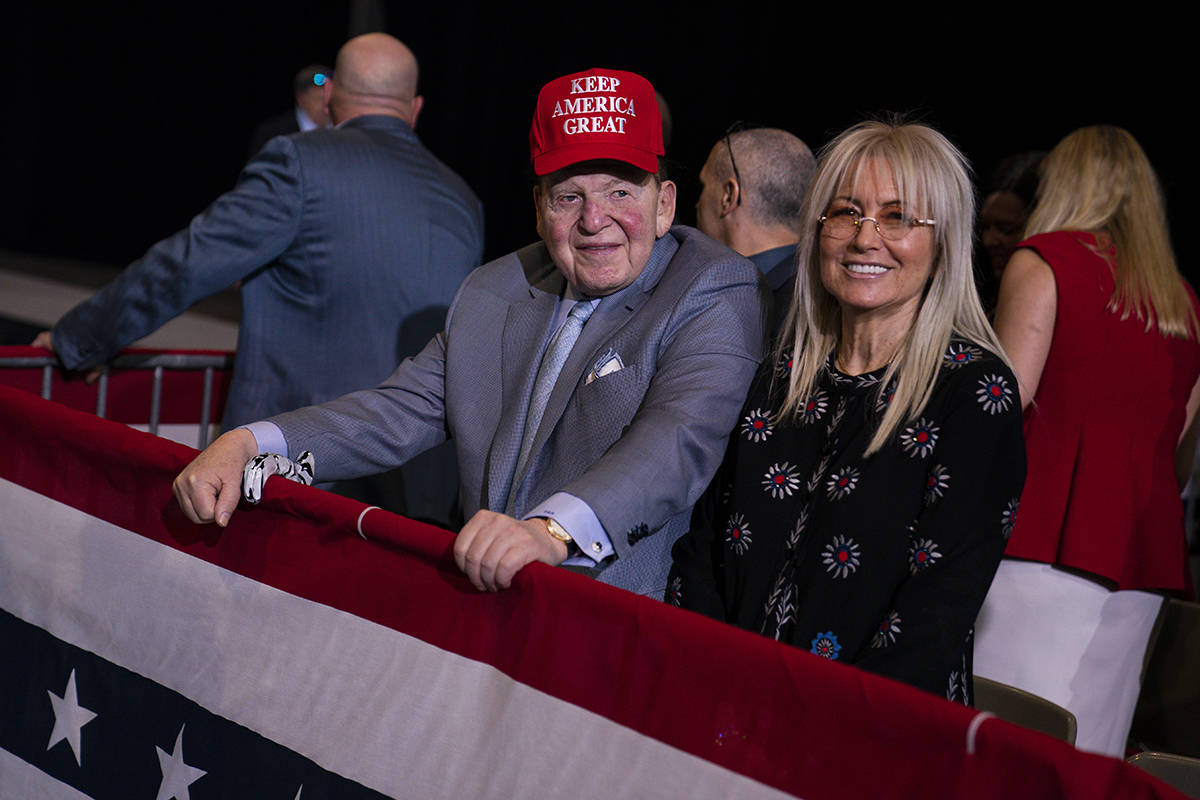 In this Feb. 21, 2020, file photo Sheldon Adelson waits for the arrival of President Donald Trump to a campaign rally at the Las Vegas Convention Center in Las Vegas. Adelson and his wife have given $75 million to Preserve America, a super PAC working to re-elect Trump. (AP Photo/Evan Vucci, File) 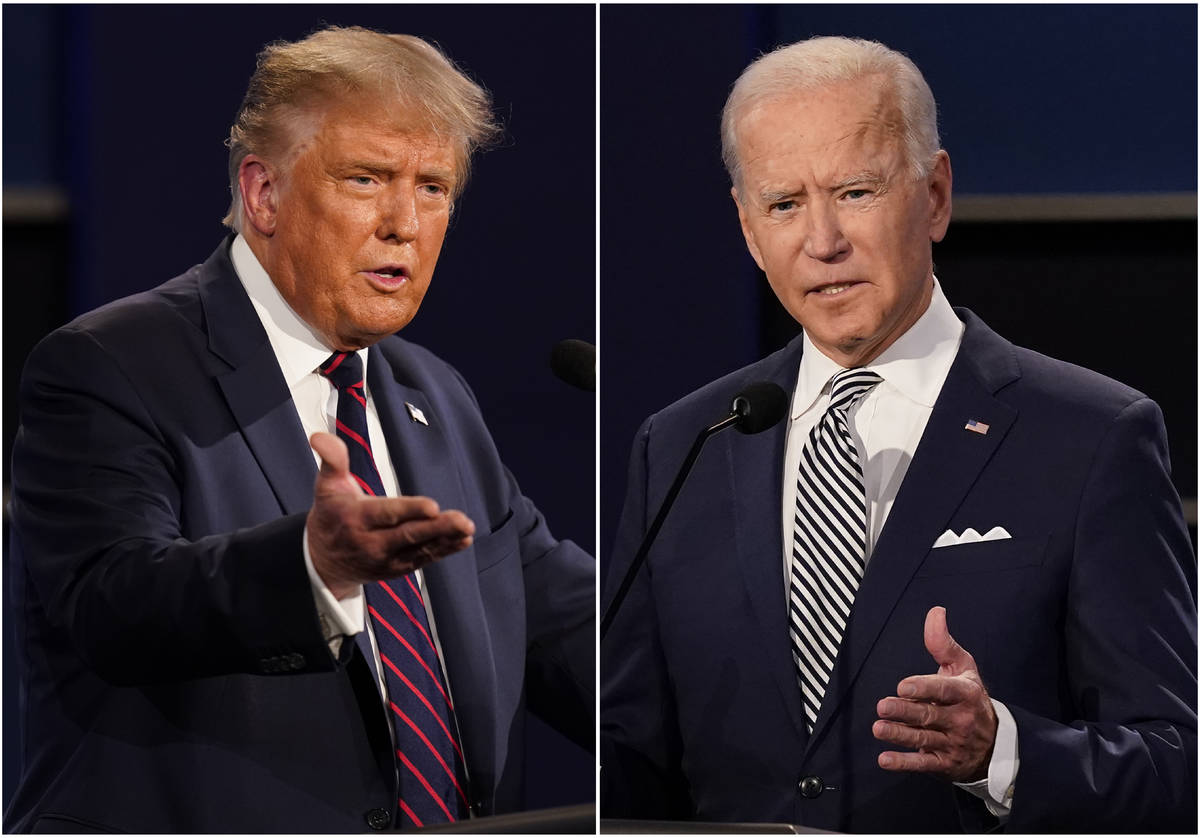 The Adelsons donated $12.5 million each three times between Aug. 25 and Sept. 25, making the Las Vegas couple the super PAC’s largest donors. Preserve America claimed expenditures of some $76 million, according to the Center for Responsive Politics.

Even before the donations to the super PAC were recorded, the Center for Responsive Politics last month listed the Adelsons as the the third-largest political donors in America for the 2020 cycle after they gave $51 million to Republican campaigns, most of it to outside groups.

The Center listed Michael Bloomberg — the former New York mayor, failed 2020 Democratic presidential candidate and founder of Bloomberg News — as the country’s 10th-largest donor after reporting that he gave more than $19 million to Democratic campaigns.

In 2016, the Adelsons donated more than $80 million to Republican campaigns and $5 million to the Trump inauguration.

In August, Axios reported that the Adelsons signaled they would support Trump again, when Andy Abboud, their top political adviser, told a group of big GOP donors, “I just want to say that I just spoke to the Adelsons. They are 110 percent behind the president. And that’s going to become apparent shortly.”

Asked about the Adelsons’ donations, Las Vegas Sands spokesman Ron Reese declined to comment on behalf of the couple.

“Thank you,” Nevada Republican Party Chairman Michael McDonald said in response to the news of the Adelsons’ donations. “It’s a great donation. I know they’re close friends. It’s well-deserved” and will balance out money California billionaires have funneled into blue campaigns, he said.

The Adelsons frequently have appeared at White House and campaign events, and they had a place of honor in the front row at the opening of the U.S. embassy when it was moved to Jerusalem in May 2018 — a game-changing move championed by the Adelsons that fulfilled a Trump campaign promise.

In February 2018, Trump awarded Dr. Miriam Adelson the Medal of Freedom, the nation’s highest civilian honor, in recognition of her philanthropy and her life’s work as a physician specializing in battling addiction.

The news of Preserve America’s big haul comes as former Vice President Joe Biden, the Democratic nominee for president, has enjoyed a fundraising edge over the Republican incumbent.

A recent National Public Radio analysis estimated that more than $1 billion had been spent on presidential campaign ads in 13 states. Pro-Biden groups spent more than $600 million, while pro-Trump groups spent a little more than $400 million.

Sen. Bernie Sanders of Vermont, who ran unsuccessfully in the Democratic primaries in 2016 and 2020, used the donations to call for the Supreme Court to reverse the 2010 decision that allowed independent campaigns to spend unlimited funds on elections.

“We must overturn Citizens United and move to public funding of elections,” Sanders tweeted.

The Review-Journal is owned by Sheldon Adelson, Dr. Miriam Adelson and their family.