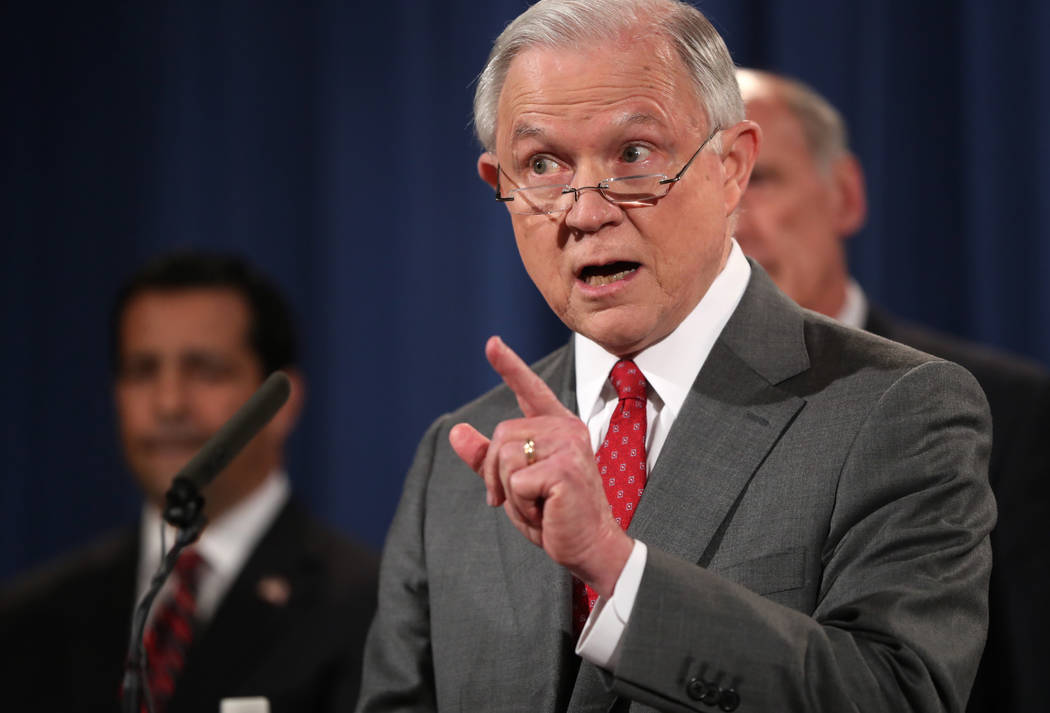 WASHINGTON — Under pressure from President Donald Trump, Attorney General Jeff Sessions on Friday announced a crackdown on those who leak classified material that threaten national security.

Trump had let it be known in recent weeks that he was disappointed in Sessions, not only for recusing himself from the federal investigation into Russian meddling in the 2016 elections, but also for not going after illegal intelligence leaks.

Sessions mended that fence Friday by holding a briefing to discuss what the government is doing about leaks.

“We are taking a stand,” he said. “This culture of leaking must stop.”

The event followed a series of news reports this year on the Trump campaign and White House that have relied on classified information. The latest example was a Washington Post story that included transcripts of Trump phone calls in January with Mexican President Enrique Peña Nieto and Australian Prime Minister Malcolm Turnbull.

The transcripts of the two calls did not reveal top-secret information, but they showed the president in a less than favorable light. Trump told Peña Nieto to stop saying Mexico would not pay for a border wall. “You cannot say that to the press because I cannot negotiate under those circumstances,” said Trump, in an exchange that made him seem more opportunistic than principled.

Trump then told Turnbull he liked talking to Russian President Vladimir Putin better. “I have been making these calls all day and this is the most unpleasant call of the day. Putin was a pleasant call,” Trump said.

World leaders need to be able to speak to each other confidentially, Sessions said, without fear that their every word will be aired in public.

But leaks are becoming more common and the number of active leak investigations has tripled under Trump.

In the first six months since Trump took office, Sessions said, his department has received nearly as many referrals of possible illegal leaks than during the previous three years. And the numbers were up under President Barack Obama, whose administration prosecuted more leakers than the three previous administrations combined.

Already, the Trump Justice Department has charged four individuals in connection with illegal leaks: former intelligence contractor Reality Winner, who has pleaded not guilty; and three individuals Justice would not name who have pleaded guilty.

While stories about palace intrigue within the Trump White House often dominate the news, Sessions said federal prosecutors would stick to illegal leaks of classified information – a category that would include the Washington Post phone transcripts.

During a later briefing, Deputy Attorney General Rod Rosenstein was asked if Justice officials were considering prosecuting reporters. Rosenstein answered, “I’m not going to comment on any hypotheticals.”

Toensing noted that Obama’s Department of Justice surveilled Fox News reporter James Rosen as well as 20 phone lines assigned to the Associated Press – and as she saw it, “nobody cared.” But Obama’s Attorney General Eric Holder also tightened the rules for spying on journalists.

‘We will find you’

Sessions warned that journalists should not expect to “place lives at risk with impunity.”

Another part of their campaign involves education, including simple warnings against mishandling classified information. “Don’t do it,” Sessions intoned. Likewise Coats warned, “We will find you.”

As for White House staff who leak to the press to punish other factions or puff themselves up, Toensing observed, “I don’t think you’re ever going to cure that.”