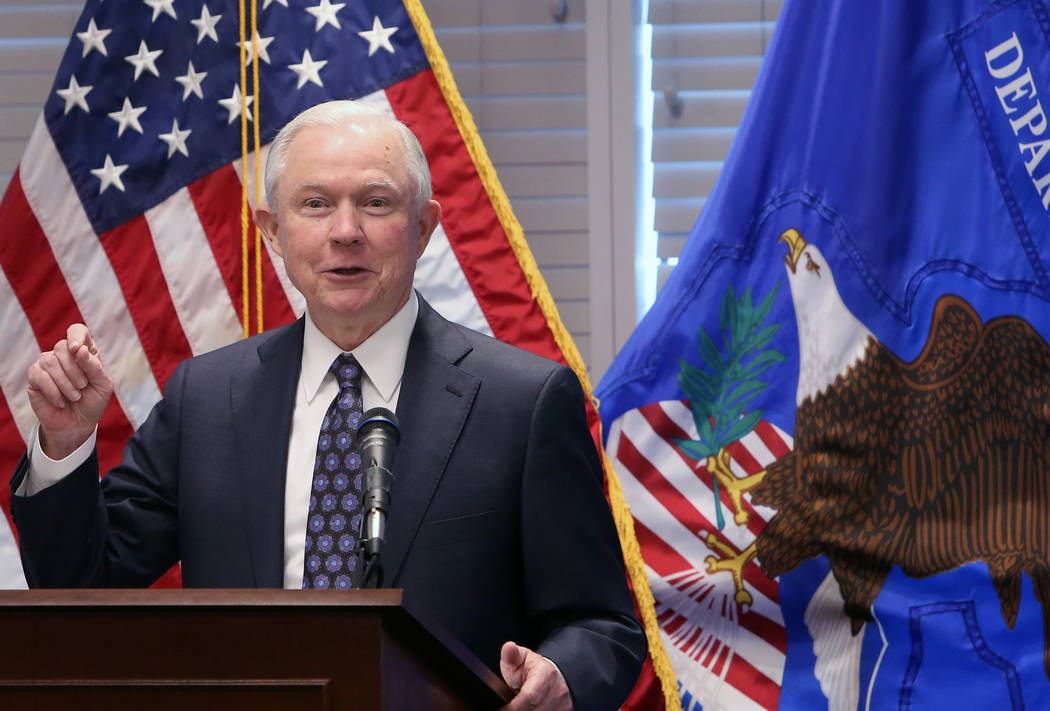 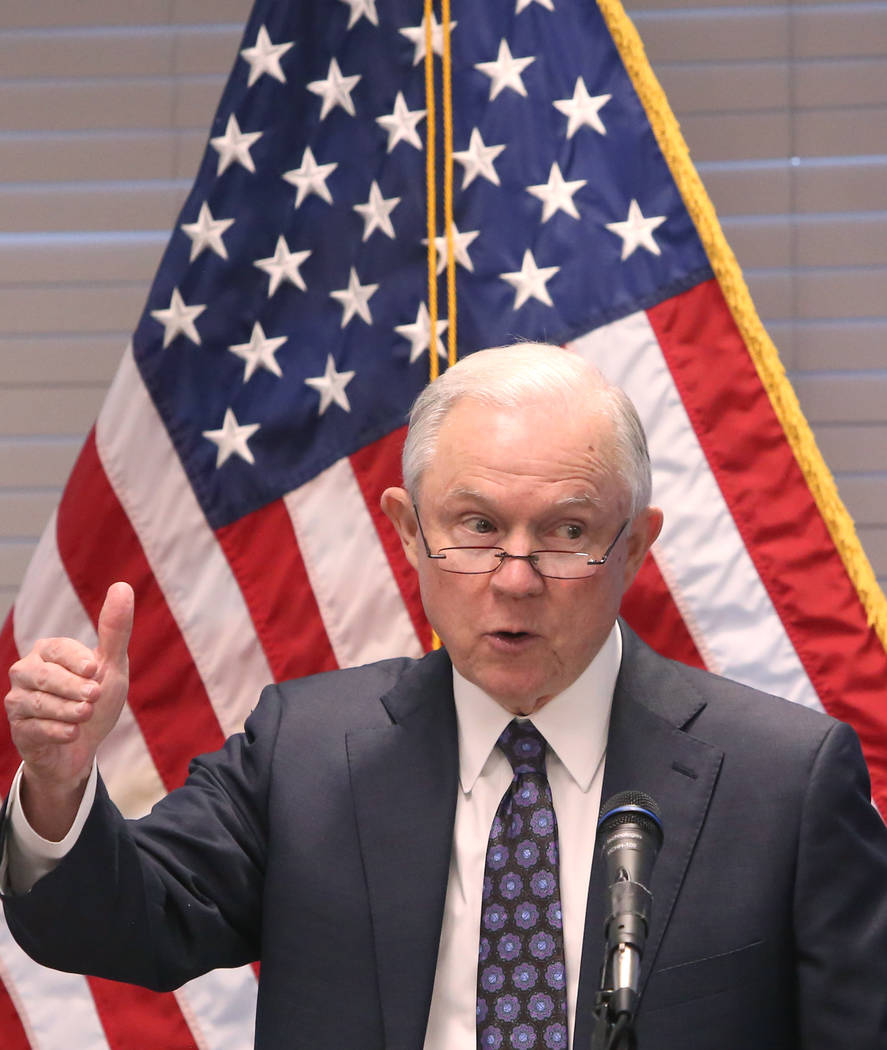 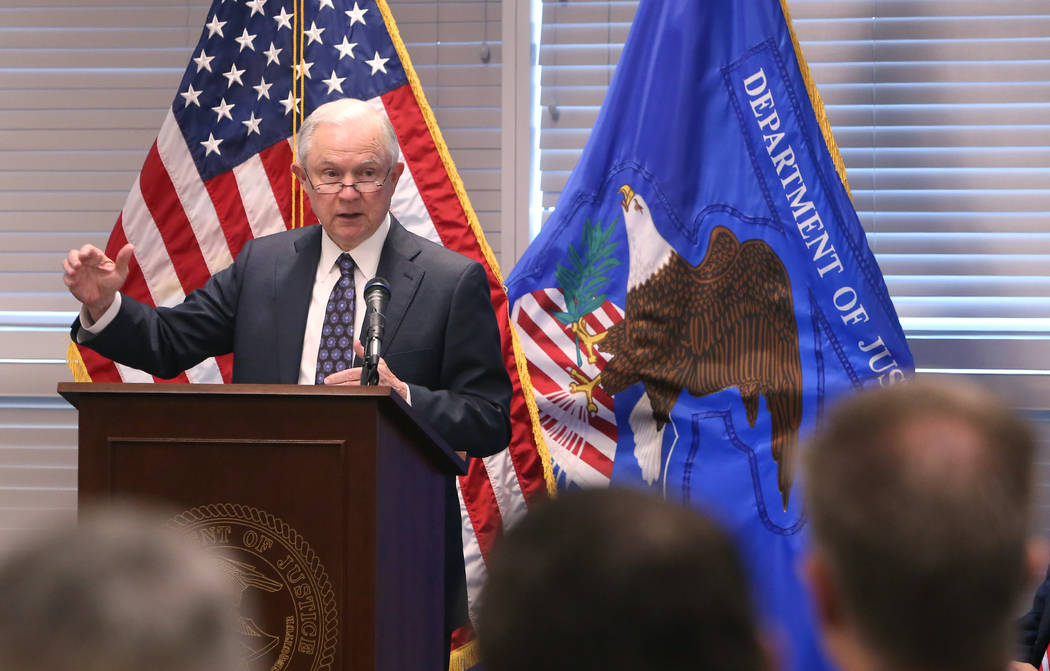 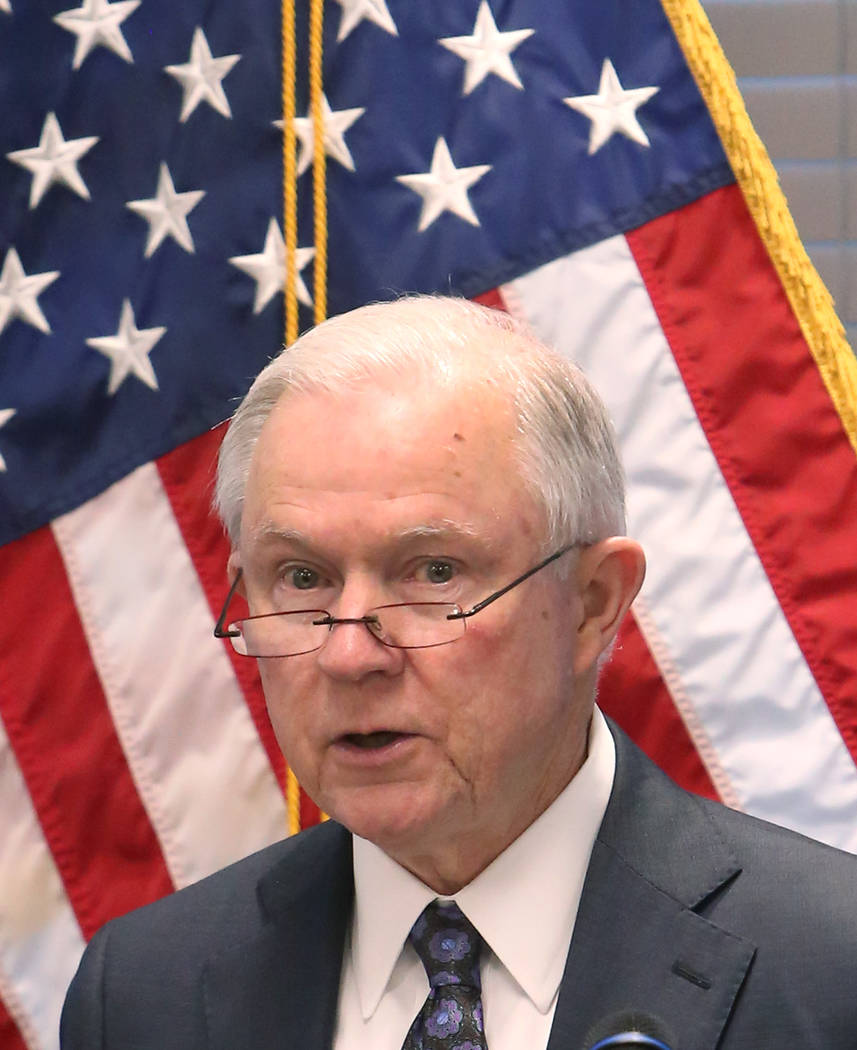 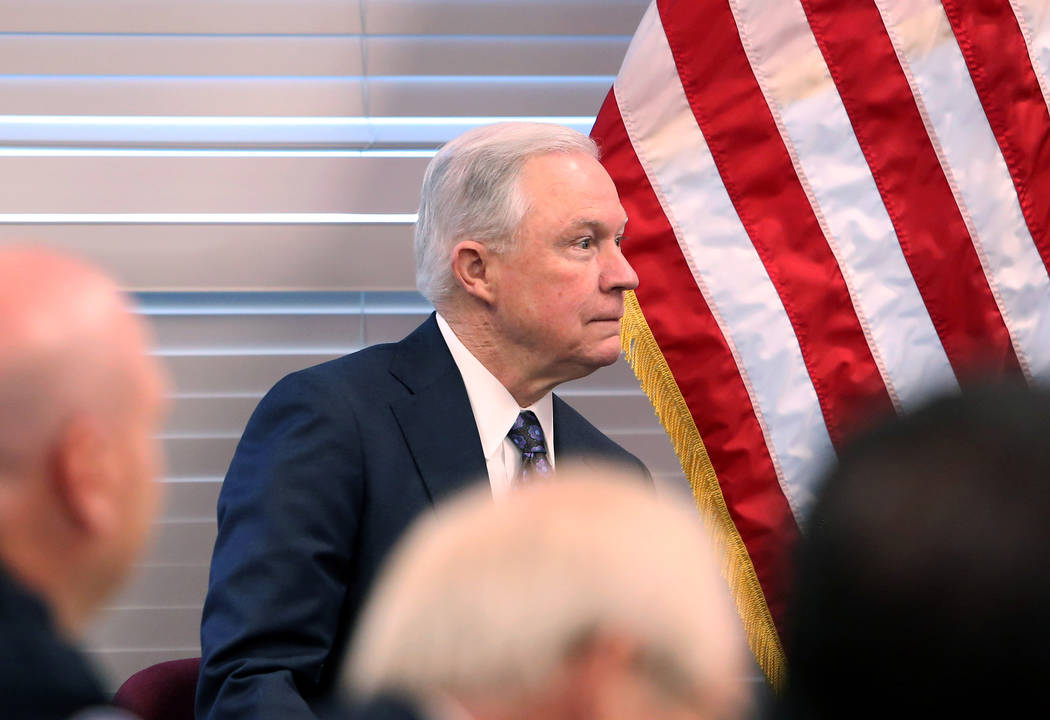 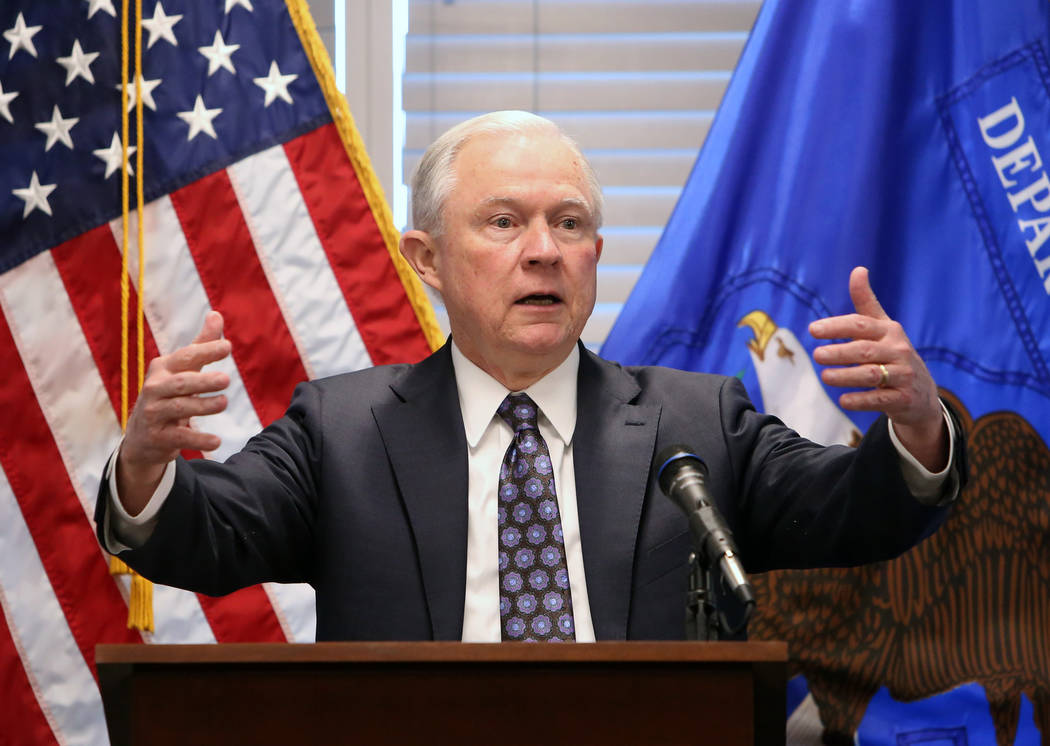 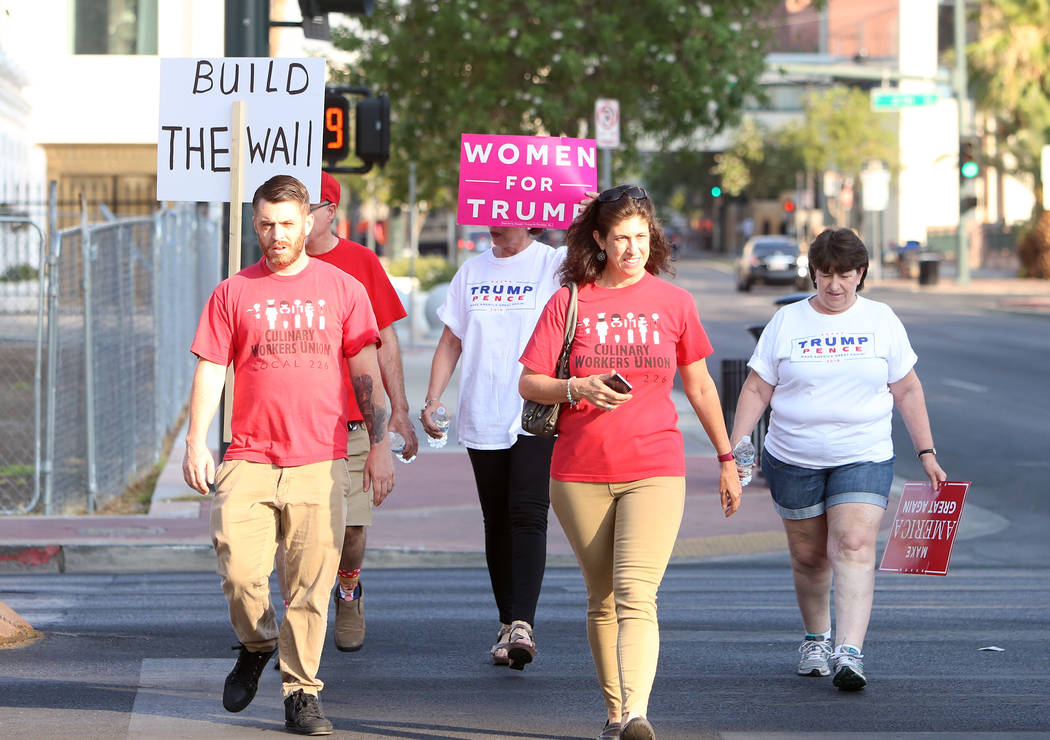 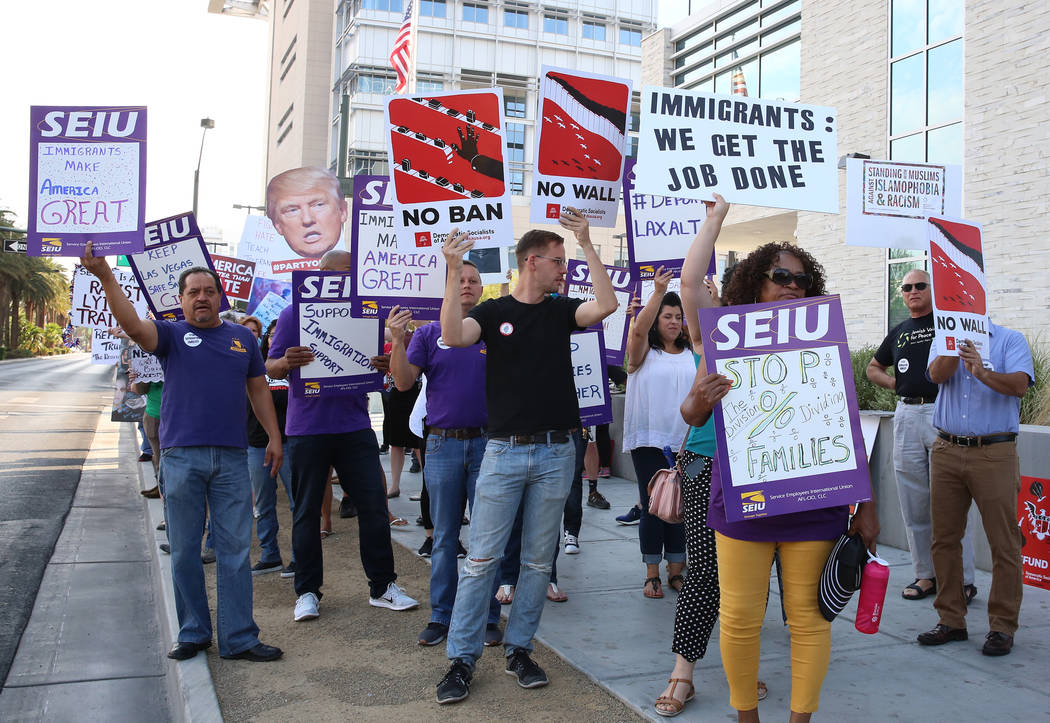 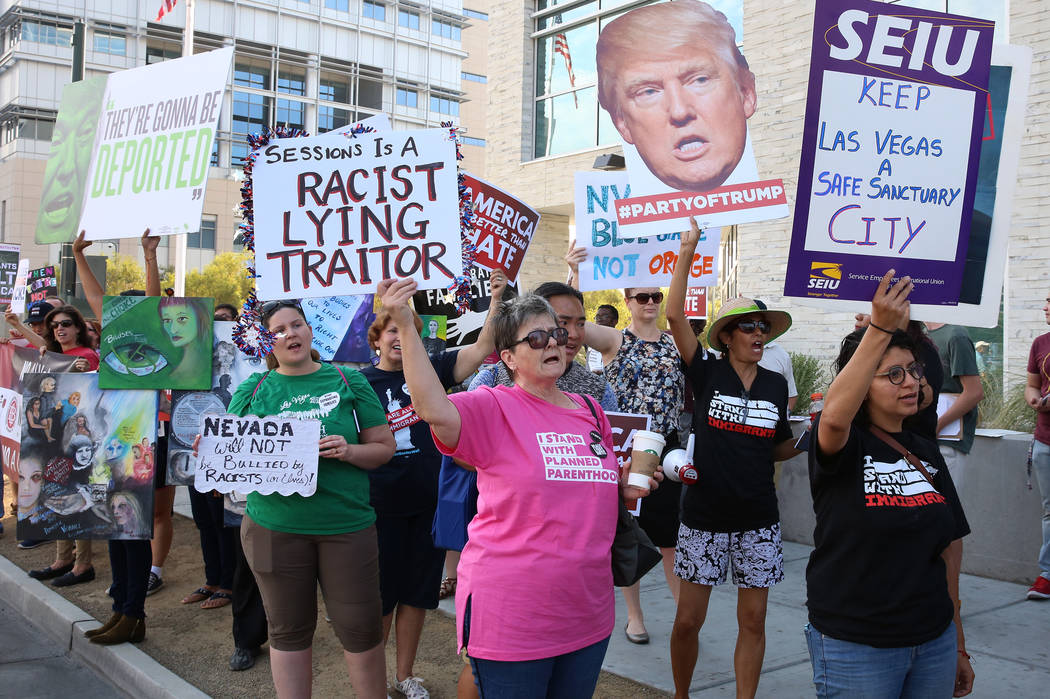 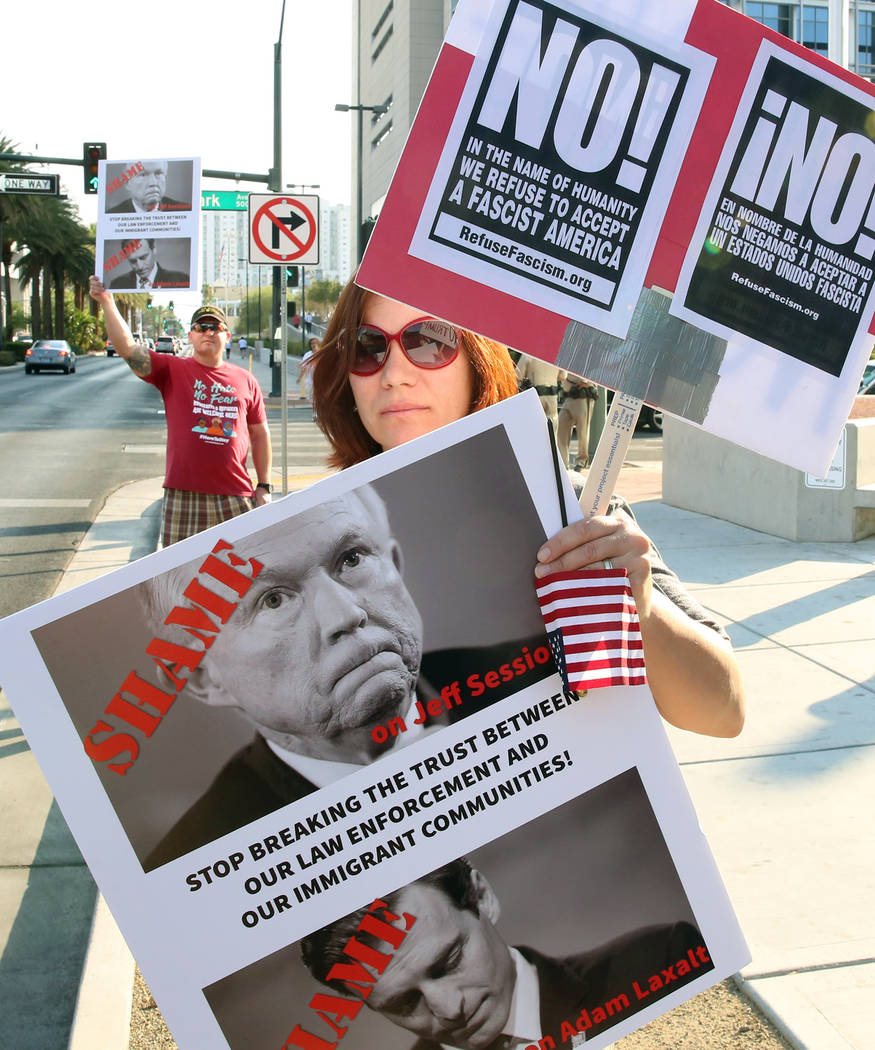 A protester, who declined to give her name, protests against a ban on sanctuary cities outside a federal building in downtown Las Vegas where U.S. Attorney General Jeff Sessions spoke to federal, state and local law enforcement officials on Wednesday, July 12, 2017. (Bizuayehu Tesfaye/Las Vegas Review-Journal) @bizutesfaye 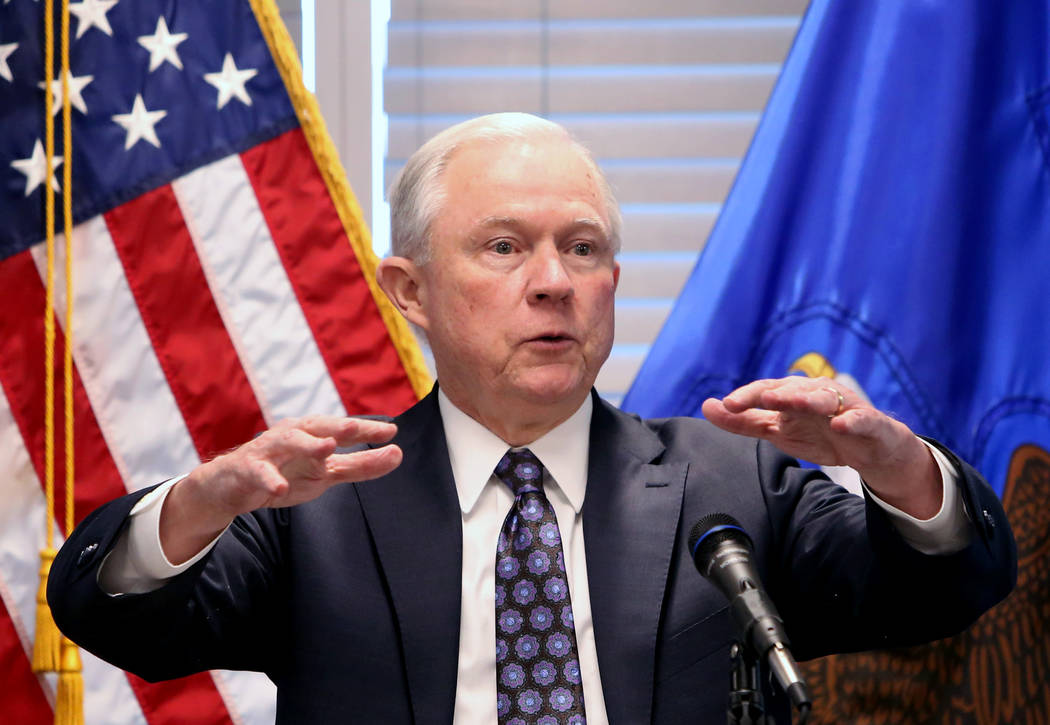 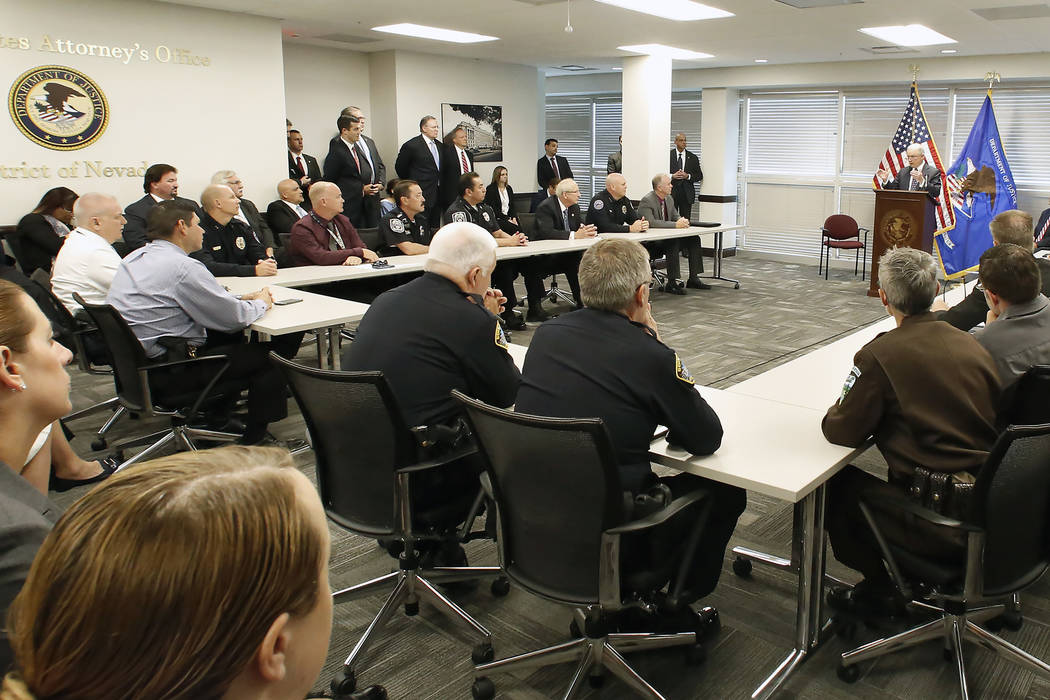 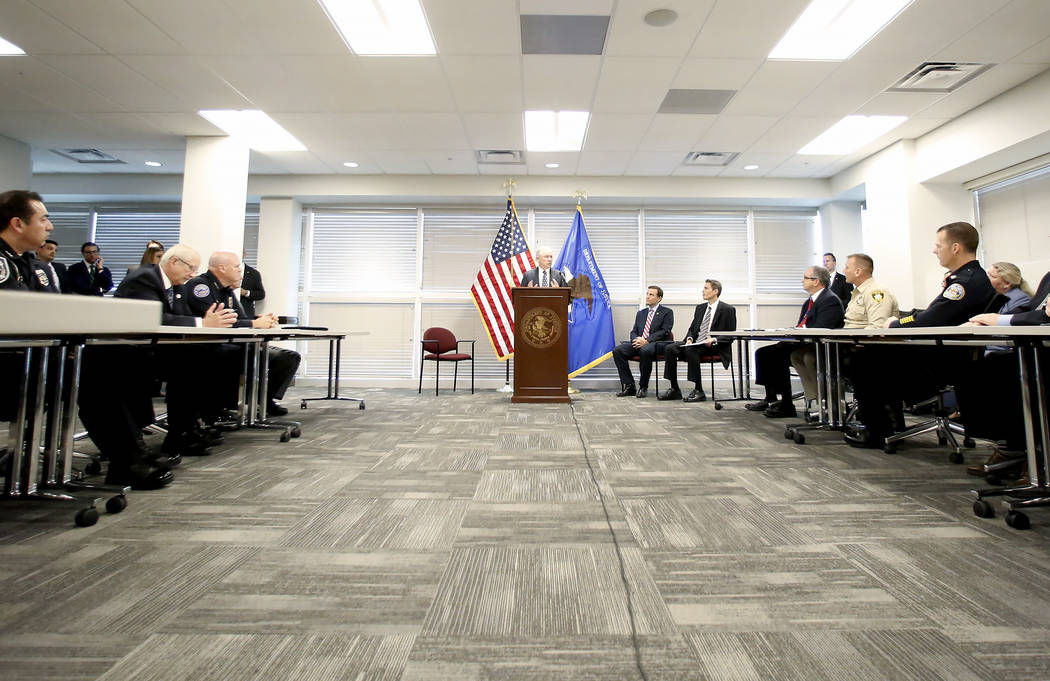 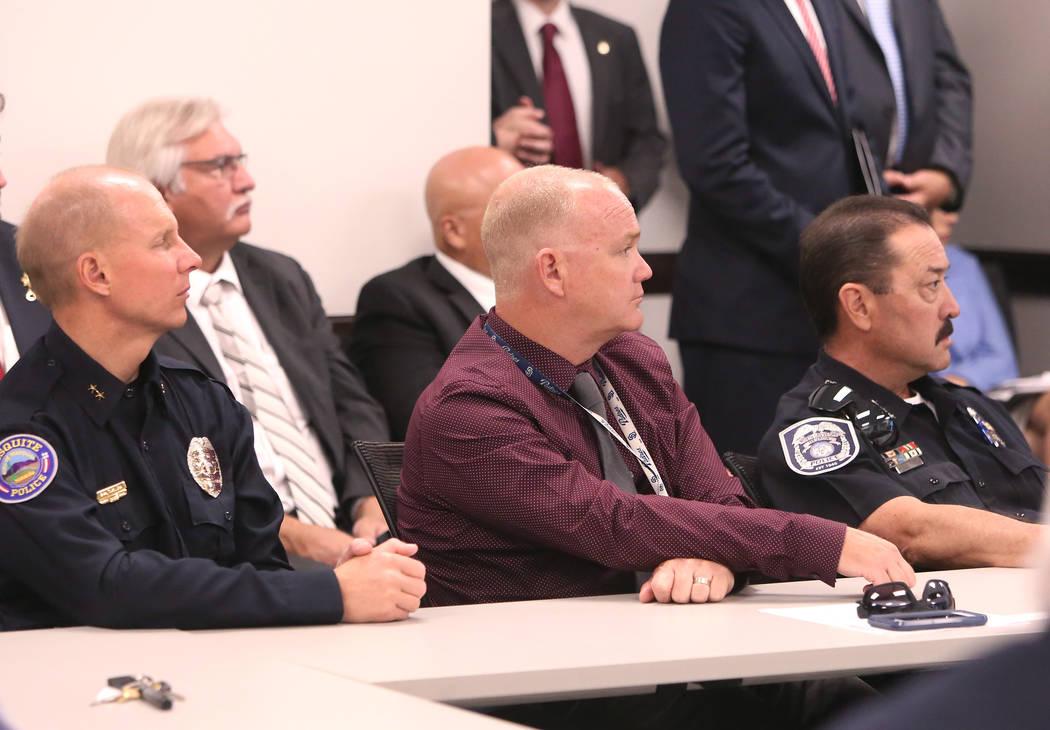 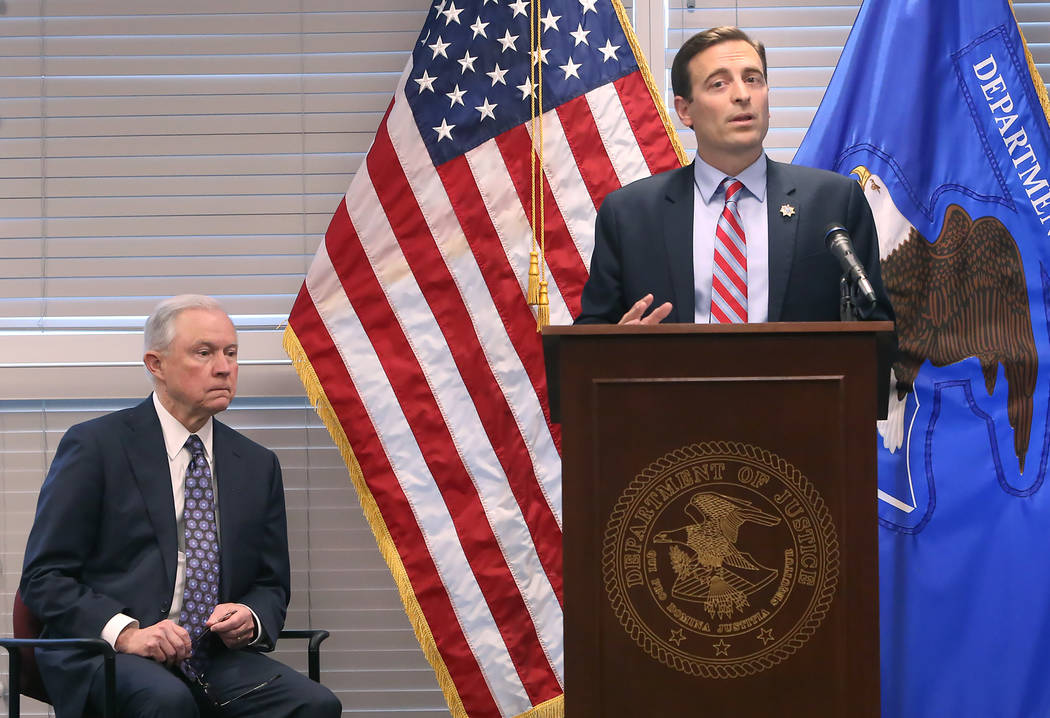 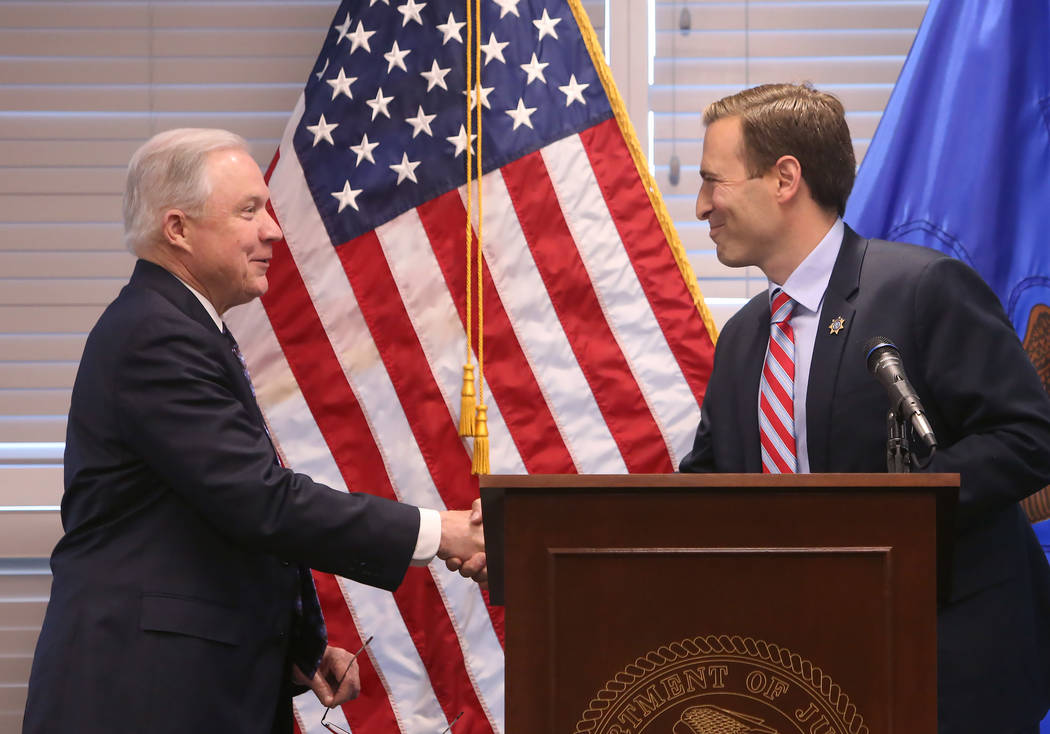 U.S. Attorney General Jeff Sessions championed a tough-on-crime stance during a speech Wednesday in Las Vegas in which he called for harsher prosecution of criminals and cooperation from local authorities as the federal government cracks down on illegal immigration.

Sessions’ visit follows clashes earlier this year between the Justice Department and local law enforcement agencies, after Clark County was included on a list of so-called sanctuary cities — areas the Trump administration has said will lose federal grant funding for limiting the extent to which local police play a role in enforcing federal immigration policies.

The Justice Department previously signaled it may be willing to reconsider the sanctuary designation for Clark County, and Sessions confirmed that position Wednesday when he said the status was under review following a meeting he had Tuesday with Clark County Sheriff Joseph Lombardo.

Sessions praised Clark County for its participation in a federal program in which police officers act as immigration agents by identifying jail detainees who are in the country unlawfully, and he highlighted federal authorities’ March arrests of 61 foreign nationals in Nevada — 55 of whom had criminal histories. Eighteen of those criminal histories are for DUI offenses, 12 are violent crime convictions, and the rest are convictions for other crimes.

“Removing criminals like these from our streets makes Nevada safer. It would make Los Angeles and San Francisco safer if they were to do it,” Sessions said, in a jab at cities that have battled the Trump administration on the issue of immigration enforcement.

Sessions gave his morning remarks to dozens of uniformed police officers, who gathered at the downtown office of Acting U.S. Attorney Steven Myhre to listen to the top law enforcement officer in America.

“Local police are not the problem,” Sessions told the members of law enforcement who sat before him. “I know that you want to help. The problem is that politicians have forbidden you to help.”

The attorney general blasted cities the Justice Department identified as “non-cooperative jurisdictions” after President Donald Trump signed an executive order to strip funding from areas that limit local cooperation with the Department of Homeland Security. He mentioned by name cities where, unlike Clark County, local officials fought against the administration’s immigration policies rather than attempting to prove compliance.

“When cities like Philadelphia, Boston or San Francisco advertise that they have these policies, the criminals take notice,” Sessions said. “These jurisdictions are protecting criminals that under the law should be deported.”

In his speech, Sessions mentioned the 2015 death of 32-year-old Kate Steinle, who was shot in San Francisco by an undocumented immigrant. The shooter, who had seven felony convictions, had been deported but later returned to the U.S.

“If we have a wall, it’s not going to be so easy to get back in,” Sessions said, referencing the proposed border wall that was a cornerstone of Trump’s campaign platform.

He called on the U.S. Senate to pass immigration legislation from the U.S. House of Representatives that would codify Trump’s executive order on sanctuary cities and allow victims of crimes by undocumented immigrants to sue those cities.

Sessions also noted that the Justice Department is ramping up its own immigration enforcement efforts, and said he directed federal prosecutors across the country to appoint a border security coordinator in each U.S. attorney’s office.

The attorney general pivoted to the immigration issue after spending several minutes focusing more broadly on the issue of violent crime. He declared that a “disproportionate amount of crime is created by a very small group of criminals,” and said that most of those people should be incarcerated. Harsher punishment and longer prison sentences, Sessions said, would deter future crime.

“It sends a message to young people who may be thinking this is a glamorous lifestyle, but when they see somebody they thought they admired get 20 years in the federal slammer or the state slammer, then it maybe takes the bloom off that rose and they don’t look like they’re so smart,” Sessions said. “Maybe they’ll choose a better lifestyle than the criminal lifestyle.”

“I worry that some of the steps that Jeff Sessions, supported by (Nevada Attorney General) Adam Laxalt, are taking will lead to Trump’s federal agents just marching into Nevada, violating the Constitution, and just arresting anybody they presume to be foreign-born,” said Laura Martin, a protester who works for the Progressive Leadership Alliance of Nevada.

Deputy Chief Richard Suey, who oversees the Metropolitan Police Department’s participation in the federal 287(g) program that fosters a partnership between state law enforcement and federal immigration authorities, said “people are believing that Metro is just letting people go after murdering somebody, and the Department of Justice is unfortunately making it seem that way.”

But Suey said he was encouraged by Sessions’ statement that the Justice Department is reviewing the sanctuary city status.

“It brings me hope,” he said. “We’ve been in full compliance.