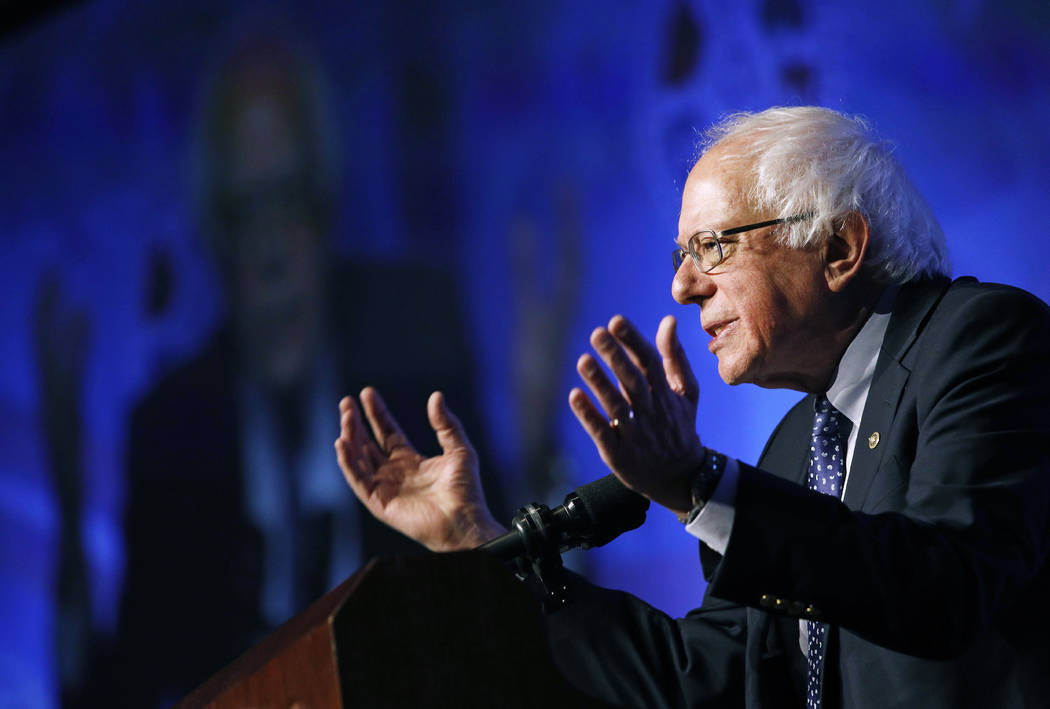 In this April 8, 2019, photo, Democratic presidential candidate Sen. Bernie Sanders, I-Vt., speaks at a convention of the International Association of Machinists and Aerospace Workers in Las Vegas. (AP Photo/John Locher)

WASHINGTON — Sen. Bernie Sanders of Vermont will unveil a new version of his “Medicare for All” plan on Wednesday, shaking up the 2020 presidential election by reopening the debate over his call to eliminate private health insurance.

Four of Sanders’ fellow senators and rivals for the Democratic nomination are set to sign onto the updated single-payer health care proposal. The bill’s reintroduction promises to shine a bright light on Democratic presidential candidates’ disparate visions for the long-term future of American health care.

Under fire from President Donald Trump and Republicans for the astronomical price tag of Medicare for All, some candidates who support the plan tout it as one of several ways to achieve more affordable coverage and lower the number of uninsured. And others who don’t back it are instead focusing on safeguarding popular provisions of the Affordable Care Act, such as the one that protects coverage of pre-existing conditions.

“Of course, our No. 1 goal should be to make sure we keep in place those protections so people don’t get kicked off their insurance,” Sen. Amy Klobuchar , a Minnesota Democrat who isn’t signed onto Sanders’ bill, told reporters Tuesday. “Then we also have to see the Affordable Care Act as a beginning and not an end.”

Klobuchar supports a so-called public option, versions of which would allow Americans to buy into Medicare or Medicaid. Four other Democratic senators also running for president — Elizabeth Warren , Cory Booker , Kamala Harris and Kirsten Gillibrand — back Sanders’ single-payer plan, which would replace the current mix of private and government health insurance in the U.S. with a new system run by the government. But they have also signed onto at least one version of a public option.

Warren pointed to “a lot of different pathways” to universal coverage during a televised CNN town hall last month. “What we’re all looking for is the lowest cost way to make sure that everybody gets covered.”

The debate is unfolding in the early stages of a Democratic primary in which some candidates have pointed to their support of Medicare for All to prove their progressive bona fides. But other Democratic contenders, including former Colorado Gov. John Hickenlooper , have criticized Sanders’ measure as politically infeasible.

Under Medicare for All, Americans would no longer pay premiums or face insurance deductibles as the government-run system replaced private health insurance offered through employers, the mainstay of coverage for more than 160 million Americans.

Big tax increases would be needed to finance such a system. The transition is likely to be complicated, dismantling the private health insurance industry and making major changes for hospitals, doctors, drug companies and other medical providers.

“What our system does is get rid of insurance companies and drug companies making billions of dollars in profit every single year,” Sanders told CBS News for an interview set to air Wednesday, adding that private insurance would largely exist solely for elective medical care such as cosmetic surgery.

With Sanders’ idea returning to the forefront, Republicans have a fresh opportunity to slam his plan as too costly and unworkable.

“So-called ‘Medicare for All’ means private insurance for none, kicking 180 million Americans off of their current plans,” said Kayleigh McEnany, spokeswoman for Trump’s re-election campaign. “‘Medicare for all’ is a euphemism for government takeover of healthcare, and it would increase wait times, eliminate choice, and raise taxes.”

She touted Trump’s “free market policies” as a better alternative.

Trump has said he will take up health care after next year’s election , essentially making it a central campaign issue. And his administration is arguing in court for the full eradication of the Affordable Cart Act, former President Barack Obama’s signature health care law.

Senate Majority Leader Mitch McConnell, R-Ky., warned in a Tuesday floor speech that the cost of Sanders’ proposal “is so steep that even left-leaning analysts are quietly admitting that the tax burden is virtually certain to land on the shoulders of the middle class.”

Sanders’ office released a paper outlining options to pay for his last version of Medicare for All, estimated to cost upwards of $1 trillion per year, although none of those options was included in the legislation itself. He and other supporters of Medicare for All have generally sidestepped the question of how they would pay for their plan. Instead, they say it offers the best chance for the nation to get control over health care costs by eliminating profiteering. His newest edition of the bill would also cover long-term care, an unmet need for most middle-class families.

Several independent studies of Medicare for All have estimated that it would dramatically increase government spending on health care, in the range of about $25 trillion to $35 trillion or more over a 10-year period. But a recent estimate from the Political Economy Research Institute at the University of Massachusetts in Amherst suggests that the cost could be much lower.

Neera Tanden, president of the Center for American Progress Action Fund, noted the emphasis by most Medicare for All supporters on “multiple pathways” to universal coverage as a potential point of contrast and “fodder for debate” with Sanders. In the absence of former Vice President Joe Biden, who has yet to launch a candidacy, Sanders is leading the Democratic field in early fundraising and campaigning as a front-runner.

“I think it really matters what you say to voters. That’s the most important thing,” Tanden said.

Her group has proposed a Medicare opt-out plan known as “Medicare for America,” supported by former Texas congressman and Democratic presidential candidate Beto O’Rourke, that would allow people to choose to keep employer-sponsored insurance.

Earlier this year, a poll from the nonpartisan Kaiser Family Foundation found that Americans like the idea of Medicare for All but that support flips to disapproval if it would result in higher taxes or longer waits for care.

The poll found initial support of 56% to 42%. But support fell to 26% when people were told Medicare for All could lead to delays in getting care and to 37% when they were told it could mean higher taxes.

Biden says in State of Union that US is ‘unbowed, unbroken’