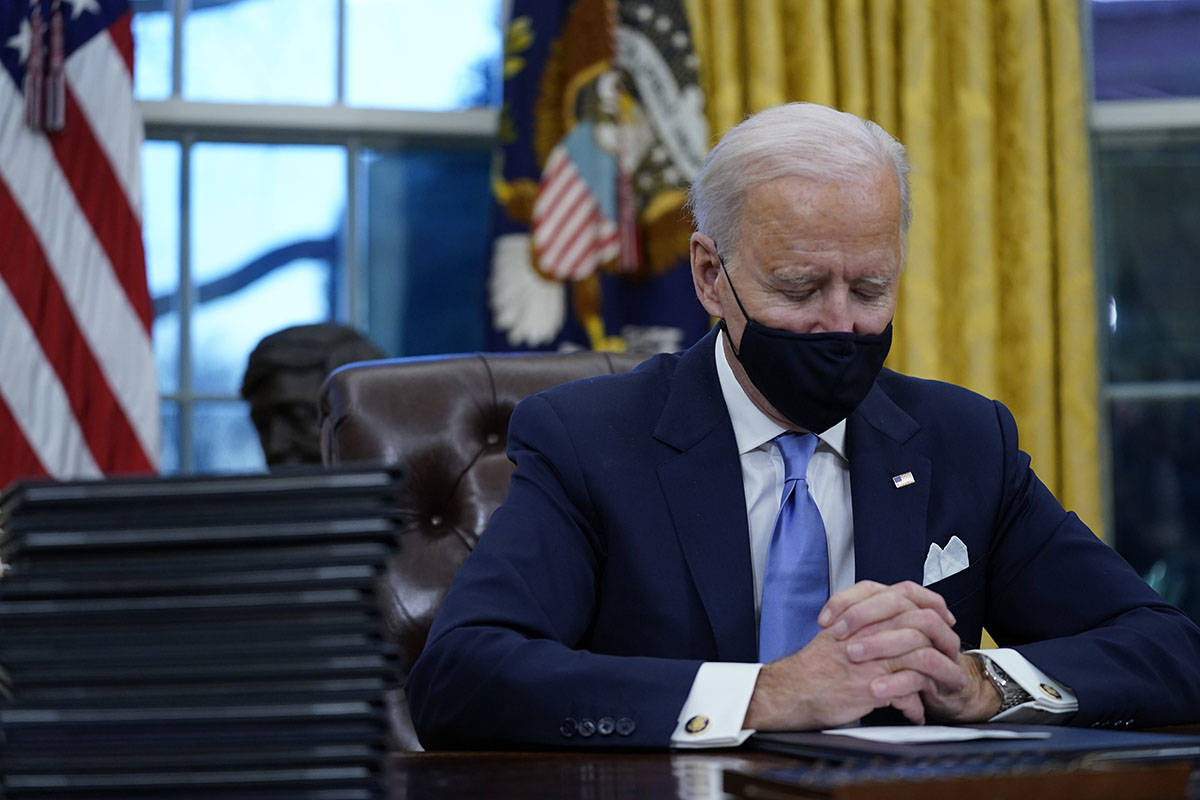 President Joe Biden pauses as he signs his first executive orders in the Oval Office of the White House on Wednesday, Jan. 20, 2021, in Washington. (AP Photo/Evan Vucci) 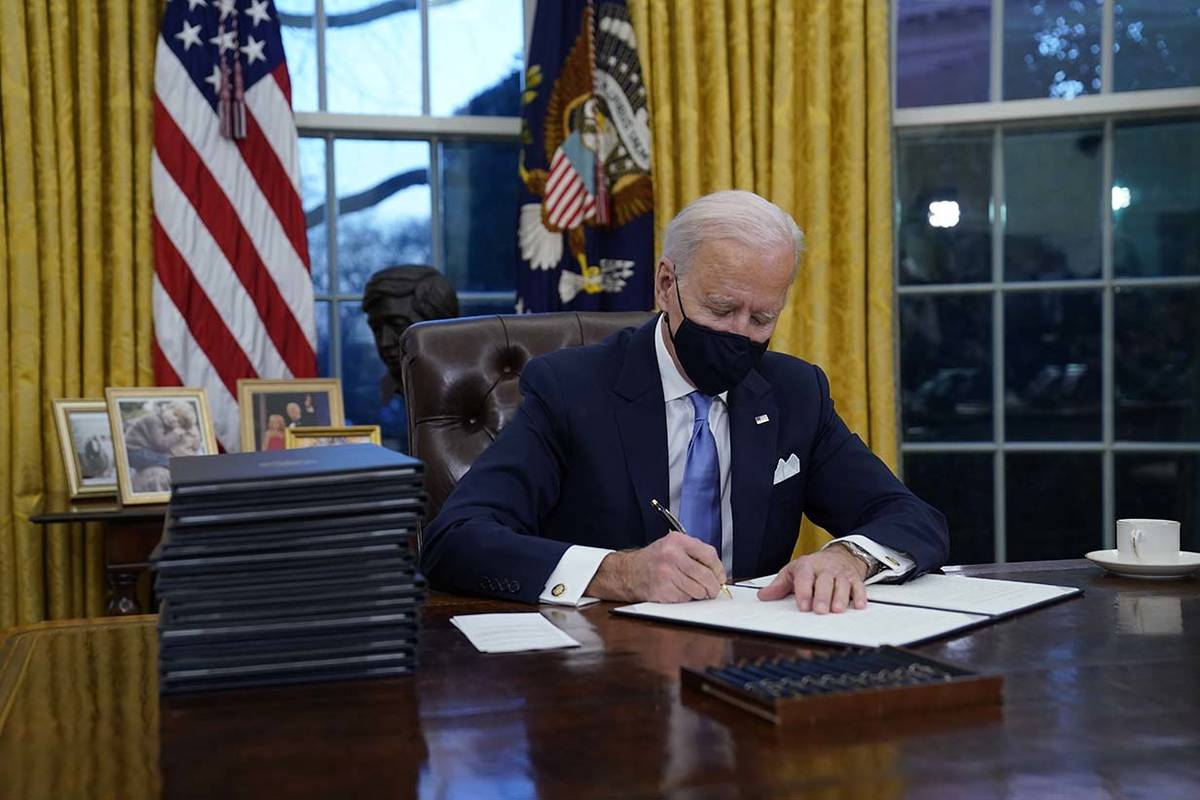 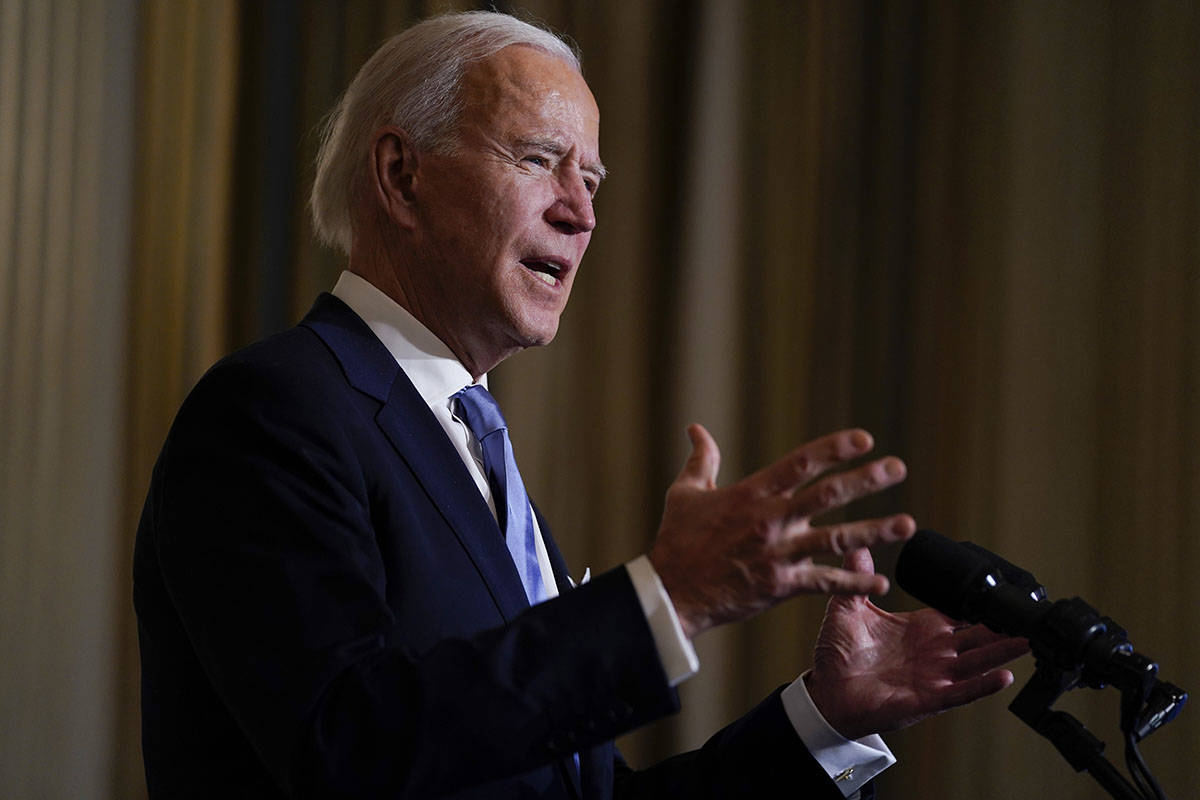 President Joe Biden speaks during a virtual swearing in ceremony of political appointees from the State Dining Room of the White House on Wednesday, Jan. 20, 2021, in Washington. (AP Photo/Evan Vucci) 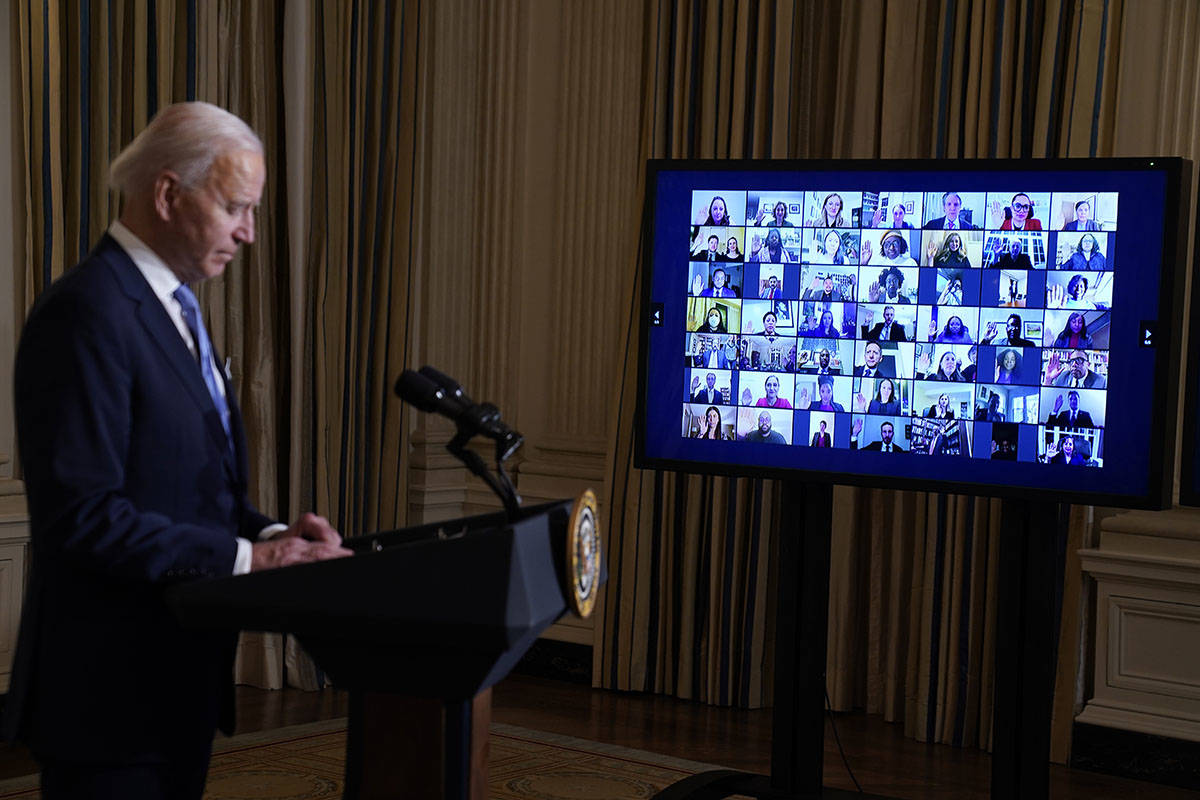 President Joe Biden listens during a virtual swearing in ceremony of political appointees from the State Dining Room of the White House on Wednesday, Jan. 20, 2021, in Washington. (AP Photo/Evan Vucci) 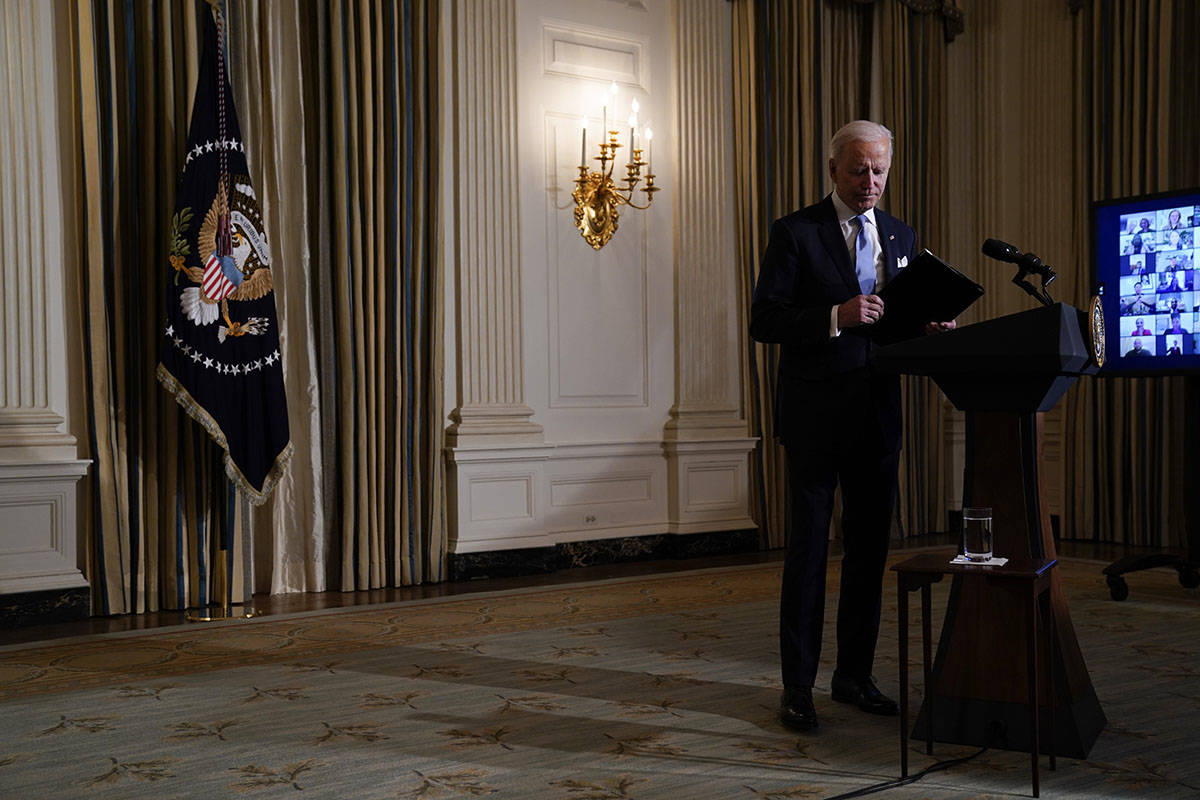 President Joe Biden leaves after attending a virtual swearing in ceremony of political appointees from the State Dining Room of the White House on Wednesday, Jan. 20, 2021, in Washington. (AP Photo/Evan Vucci) 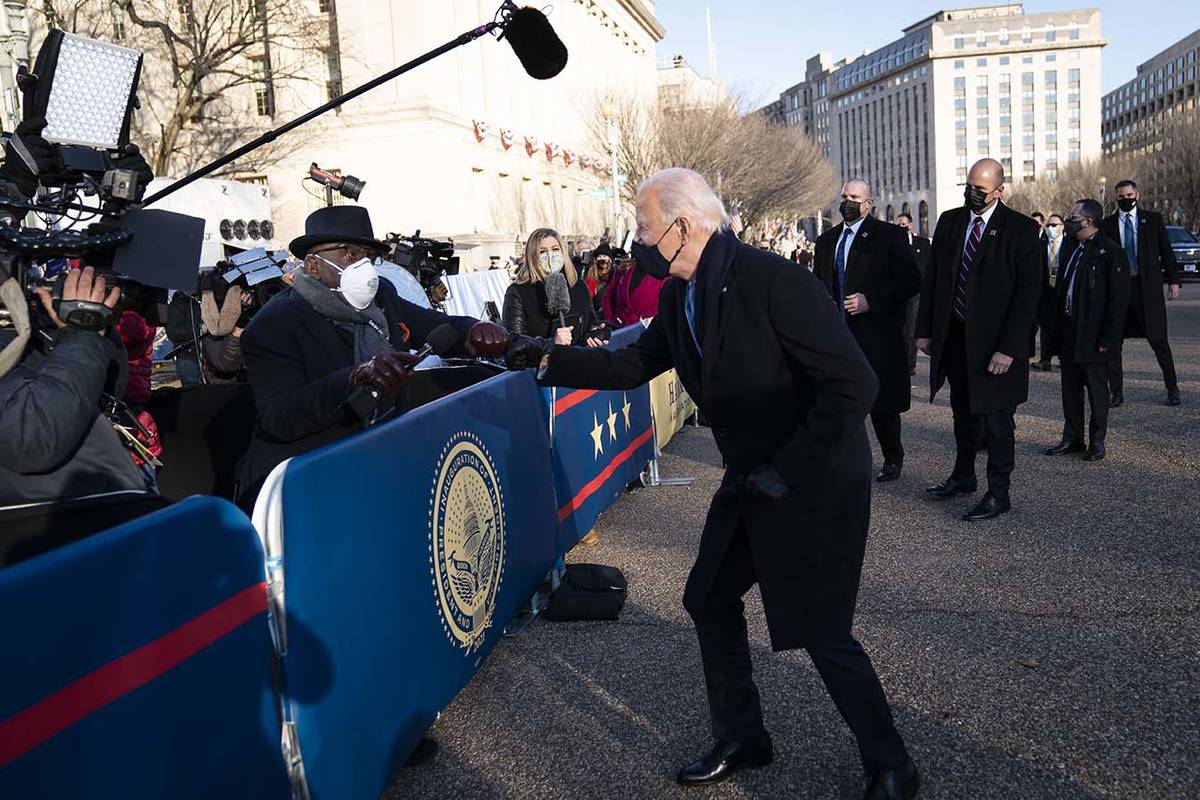 President Joe Biden talks with Washington, NBC anchor Al Roker, as he and and First Lady Jill Biden walk along Pennsylvania Avenue in front of the White House during Inaugural celebrations, Wednesday, Jan. 20, 202, after being sworn in as the 46th vice president of the United States. (Doug Mills/The New York Times via AP, Pool) 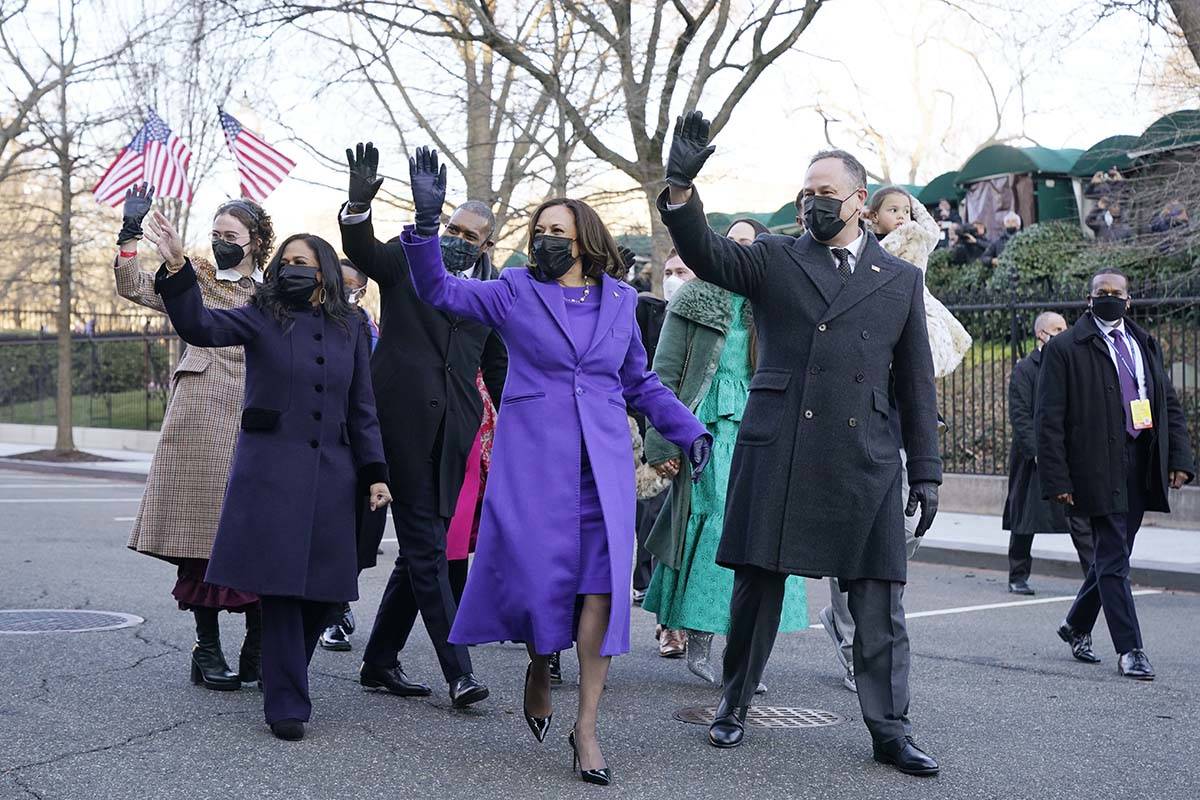 Vice President Kamala Harris, and her husband Doug Emhoff, and family, walk near the White House during a Presidential Escort to the White House, Wednesday, Jan. 20, 2021 in Washington, after being sworn in as the 46th vice president of the United States. (AP Photo/Jacquelyn Martin)

WASHINGTON — President Joe Biden got to work Wednesday after his inauguration armed with several executive orders ready to sign, appointees to swear in and a big immigration bill, the U.S. Citizenship Act of 2021, to send to Congress.

The immigration bill would provide temporary legal status and a pathway to citizenship for undocumented immigrants in the country as of Jan. 1, 2021, as well as address the root causes of migration from Central American countries.

Biden Chief of Staff Ron Klain explained in a weekend memo that the executive orders, which can be used to overturn former President Donald Trump’s directives, are likely to withstand legal challenges because they are based on well-founded legal theory and represent “a restoration of an appropriate, constitutional role for the president.”

The orders include rejoining the Paris climate accord and the World Health Organization, launching a 100-day order for people to wear masks while on federal property and federal lands or working as federal employees and contractors.

Other orders include ending the national emergency declared by Trump that hastened construction on the wall along the southern border with Mexico, and halting funding for it, and ending a ban on travel from several Muslim-majority nations, “a policy rooted in religious animus and xenophobia,” said incoming White House press secretary Jen Psaki.

The orders also include revoking a presidential permit for the Keystone XL pipeline, and a temporary moratorium on oil and gas exploration in the Arctic National Wildlife Refuge.

Biden also will ask the Department of Education to extend a pause on student loan payments and interest and extend restrictions on evictions and foreclosure, as well as asking his cabinet to work to restore the Deferred Action for Childhood Arrival program that provides legal status for undocumented immigrants to crossed the border as minors.

He also intended to return to the President Obama-era policy of prioritizing deportations based on public safety and national security threats.

Klain warned that many things need to be done, “but by Feb. 1, America will be moving in the right direction on” COVID 19, the economic crisis, climate change and racial equity issues, all of which the Biden team has targeted.