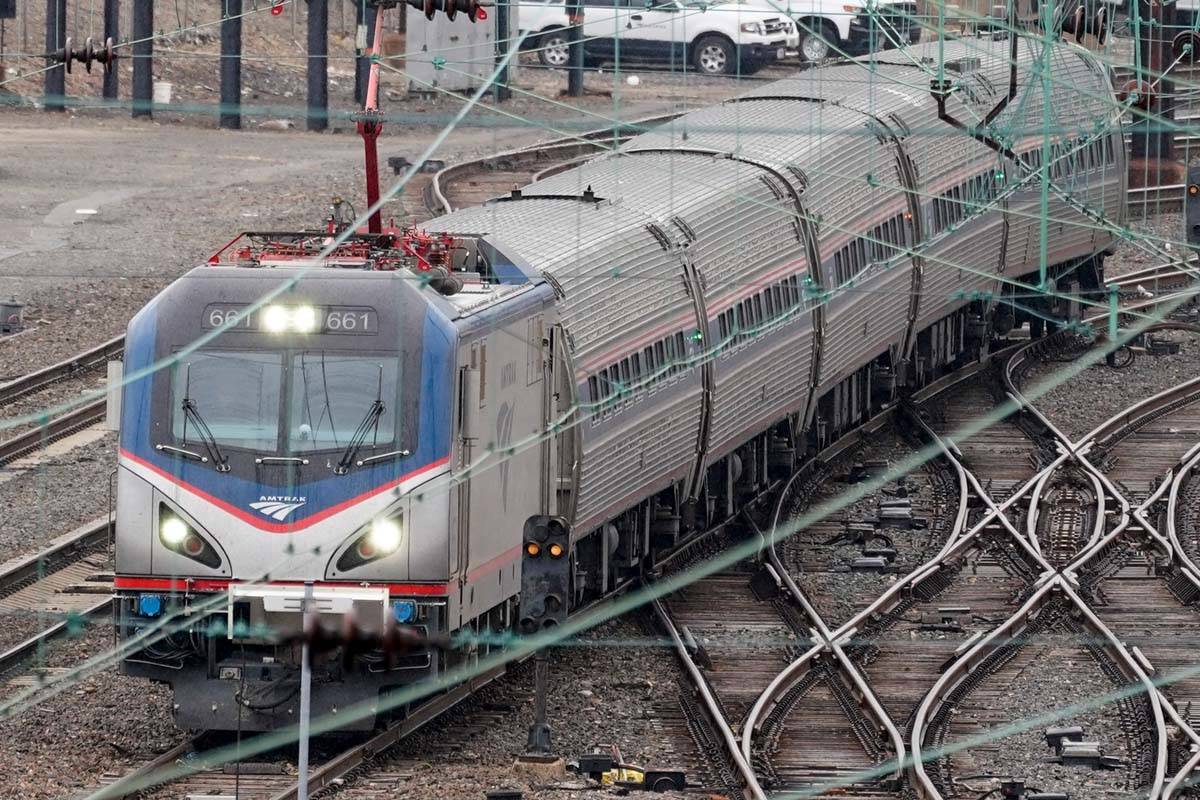 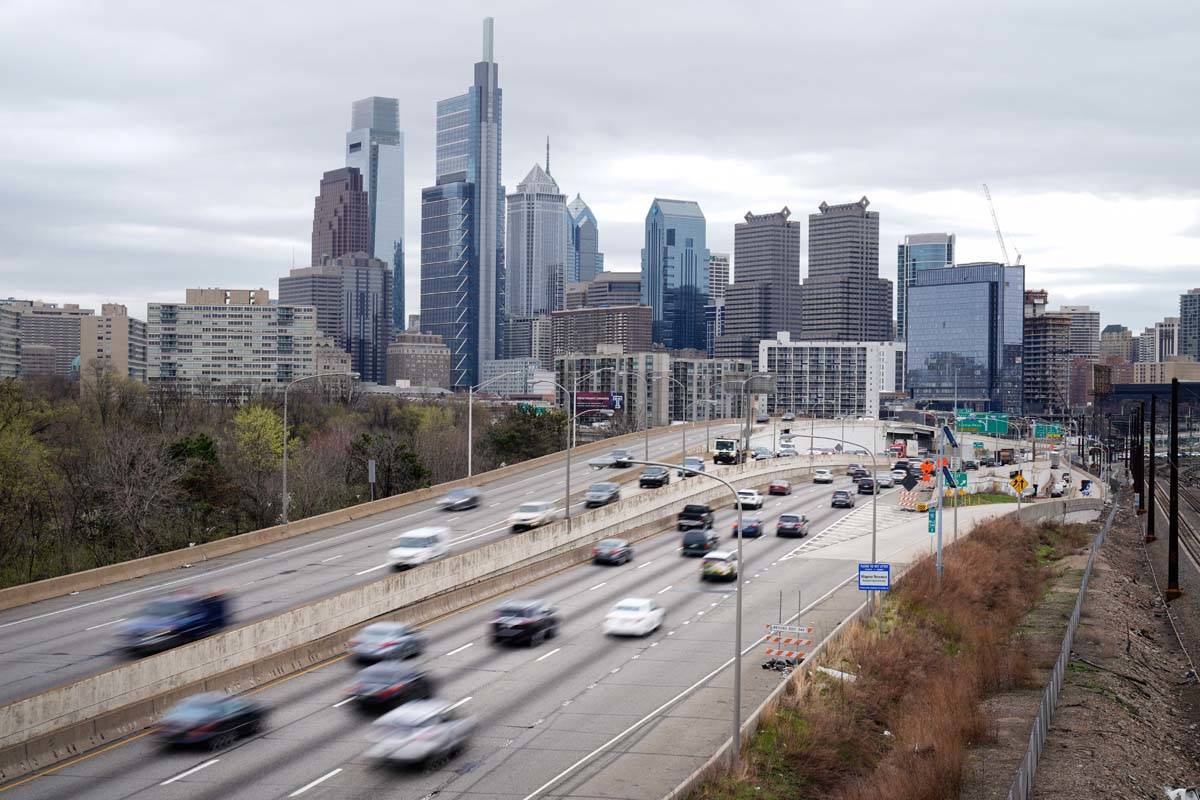 Motor vehicle traffic moves along the Interstate 76 highway in Philadelphia, Wednesday, March 31, 2021. Looking beyond the $1.9 trillion COVID relief bill, President Joe Biden and lawmakers are laying the groundwork for another of his top legislative priorities — a long-sought boost to the nation's roads, bridges and other infrastructure that could meet GOP resistance to a hefty price tag. (AP Photo/Matt Rourke) 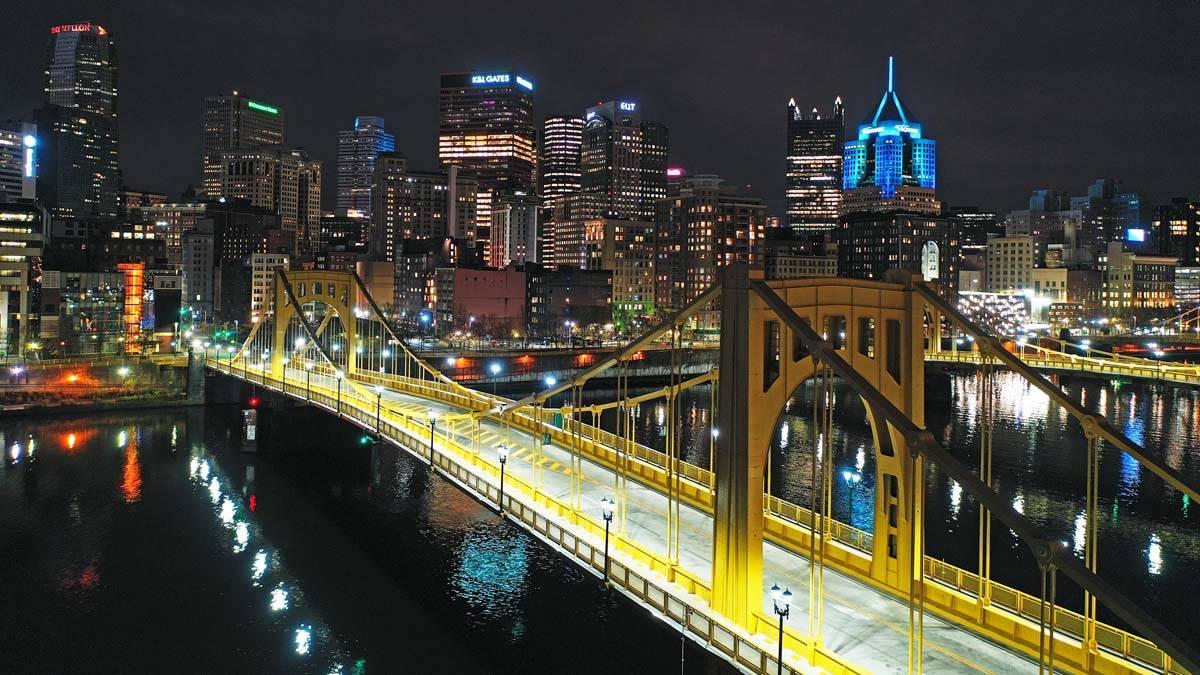 This Nov. 26, 2020 file photo shows the newly refurbished Rachel Carson Bridge over the Allegheny River in downtown Pittsburgh. President Joe Biden wants $2 trillion to reengineer America’s infrastructure and expects the nation’s corporations to pay for it. The Democratic president travels to Pittsburgh on Wednesday, March 31, 2021 to unveil what would be a hard-hatted transformation of the U.S. economy.(AP Photo/Gene J. Puskar/File) 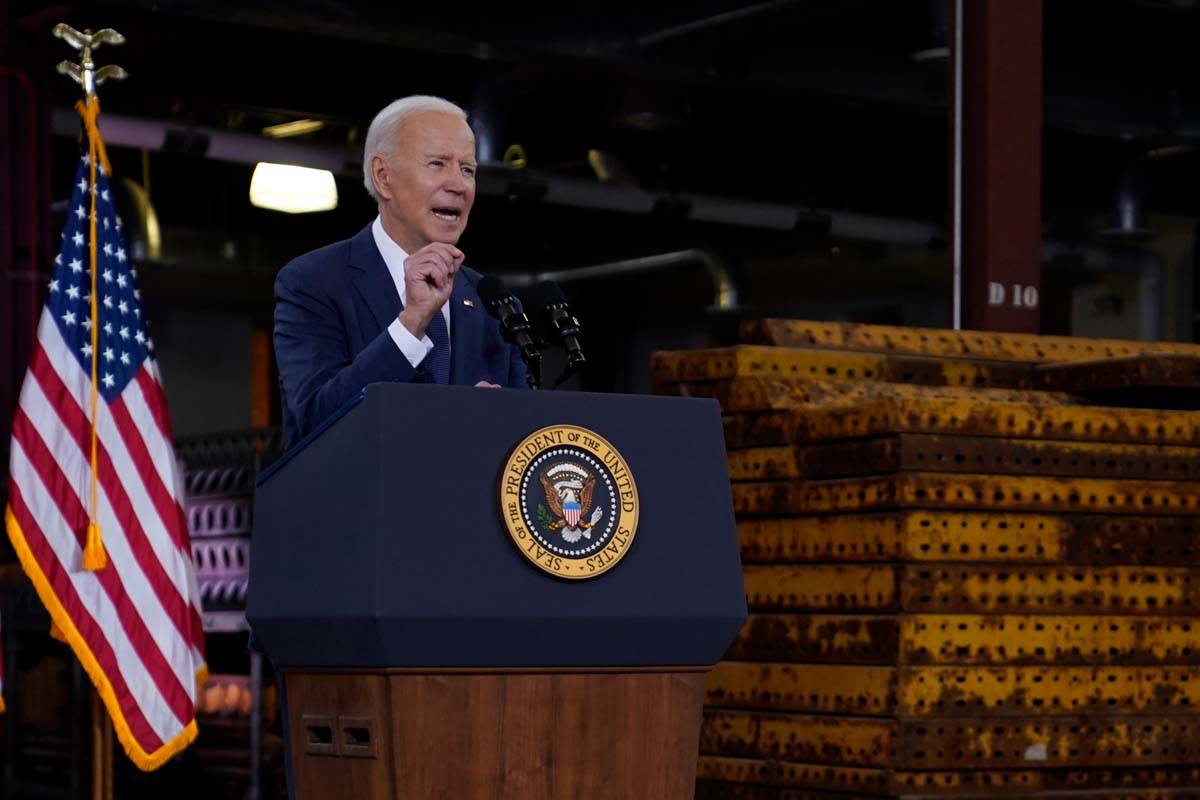 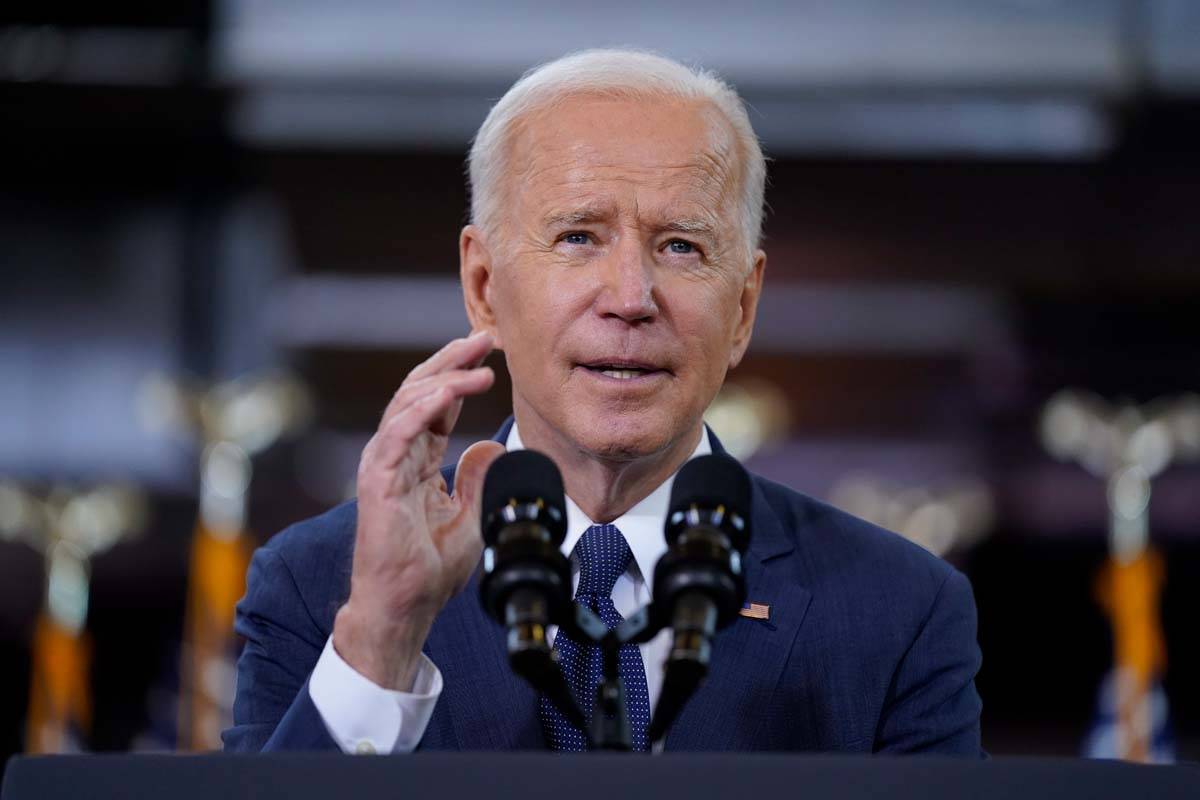 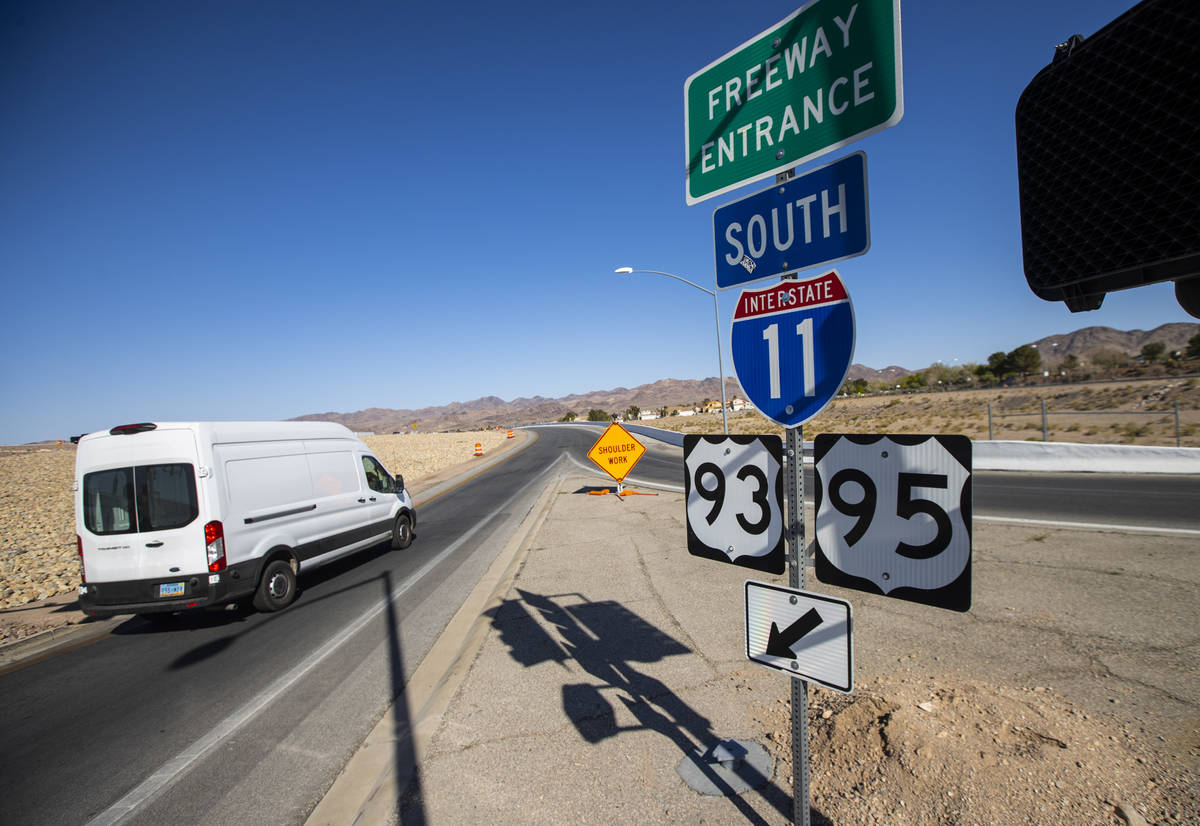 A van moves along the southbound on-ramp for Interstate 11 at College Drive in Henderson on Wednesday, March 31, 2021. (Chase Stevens/Las Vegas Review-Journal) @csstevensphoto

WASHINGTON — President Joe Biden rolled out a sweeping $2.3 trillion jobs bill in Pittsburgh on Wednesday that includes $621 billion in spending on infrastructure projects that could include highway and high-speed rail proposals for Nevada and an Amtrak link between Las Vegas and Los Angeles.

It would also increase broadband access and provide better wages and benefits for home care workers.

Biden is asking Congress to approve the jobs bill — to be funded with a hike in the corporate tax from 21 percent to 28 percent — but is likely to face opposition from Republican leaders who approved a corporate tax cut just four years ago.

“Now is the time to rebuild,” Biden told a news conference in Pittsburgh, the city where he announced his presidential campaign in 2019 and a blue-collar town hard hit by recent economic downturns.

The president said his proposal would create millions of high-paying jobs and reward work instead of wealth, which Biden said was the case with the Republican tax cut in 2017.

He said nearly 100 large corporations have paid nothing in federal taxes. In addition to raising the tax rate, he would also create incentives to keep plants in the United States and penalize corporations that send jobs to foreign countries.

The tax code would also be updated so that companies could not merge with a foreign business and avoid taxes by moving their headquarters to a tax haven. And among other provisions, it would increase IRS audits of corporations.

Meanwhile, Biden said his plan would invest in America to make it more competitive globally and improve the lives of working families.

Biden compared his proposal to the New Deal enacted by President Franklin D. Roosevelt, which created programs that helped America emerge from the Great Depression.

“It’s not a plan that tinkers around the edges,” Biden said. “It’s a once-in-a-generation investment in America unlike anything we’ve seen or done since we built the interstate highway system and the space race decades ago. In fact, it’s the largest American jobs investment since World War II. It will create millions of jobs, good-paying jobs.”

“I look forward to working with President Biden to pass a big, bold plan that will drive America forward for decades to come,” Schumer said at an event in Buffalo.

But in Kentucky, Senate Minority Leader Mitch McConnell called the Biden jobs bill “Trojan Horse” legislation that not only would raise taxes on corporations but on Americans who received a tax cut under former President Donald Trump.

McConnell’s comments signaled a tough battle in the Senate.

But lawmakers have embraced infrastructure investment as states and cities grapple with construction repair and rebuilding that requires federal help.

Nevada projects that could see a burst of federal spending include Interstate 11 from Las Vegas to Phoenix, projects to ease congestion on Interstate 15, and the proposed Brightline West high-speed rail line between Las Vegas and Southern California.

Rep. Dina Titus, D-Nev., a ranking member of the House Transportation and Infrastructure Committee, touted the bill for potentially funding local projects that will help Las Vegas continue to be an international destination for tourism and entertainment “for decades to come.”

Titus said she would use her senior position on the committee to make sure “our community gets the resources we need.”

“The entire proposal is completely paid for by reversing corporate tax cuts handed out by the previous administration,” Titus added. The committee could produce legislation with specific project funding by May.

Also Thursday, Amtrak CEO Bill Flynn said the Biden package includes $80 billion for rail and that Amtrak looks to create 30 new routes, including one from Los Angeles to Las Vegas.

In all, Amtrak would expand service to 160 communities, including Las Vegas, Phoenix, Columbus, Ohio, and Nashville, Tennessee.

Nevada Sens. Catherine Cortez Masto and Jacky Rosen, both Democrats, have called on Congress to expand broadband access to the state’s rural regions to improve education and telehealth access.

Biden’s bill includes $111 billion to provide broadband access nationwide, and another $100 billion to upgrade the electricity grid that he said was in dire need of repair to keep neighborhoods from losing power when a pole or transformer goes down.

Republicans, though, labeled the proposal a handout to some labor groups seeking wage and benefits for home care workers, and favors to liberal groups seeking climate change initiatives.

“The tax-and-spend Democrats are back. The plan President Biden unveiled today is an out of control socialist spending spree,” said Sen. John Barrasso, R-Wyo., chairman of the Senate Republican Conference.

Rep. Blaine Luetkemeyer, R-Mo., the ranking member on the House Small Business Committee, said the tax hike to pay for the massive bill would be felt by every American worker.

Biden pleaded for GOP input and discussion to help squeeze the bill through the 50-50 Senate. Without Republican support, Democrats would need to use the budget reconciliation process that would allow them to pass the legislation with a simple majority vote and avoid a filibuster.

Overall, Democrats embraced the proposal as a long-term economic plan for the country that picks up where the $1.9 trillion coronavirus relief package leaves off and would create millions of jobs to further economic growth during the next 15 years.

The U.S. Chamber of Commerce backed the proposal to improve infrastructure, but criticized Biden for raising taxes.

And Democratic lawmakers from northeast states demanded that any changes in the tax code restore the deduction of state and local taxes that the Trump-era cuts capped at $10,000, a cap that disproportionately had an impact on blue states.

Meanwhile, Biden is expected to roll out more proposals and tax measures in coming weeks.

In his speech in Pittsburgh, he focused on projects that modernize schools, replace lead pipes and retrofit homes and businesses to lessen the impact on climate and ensure clean water to residents.

It was endorsed by the U.S. Conference of Mayors as a blueprint to “create a safe, sustainable and equitable future for all Americans.”