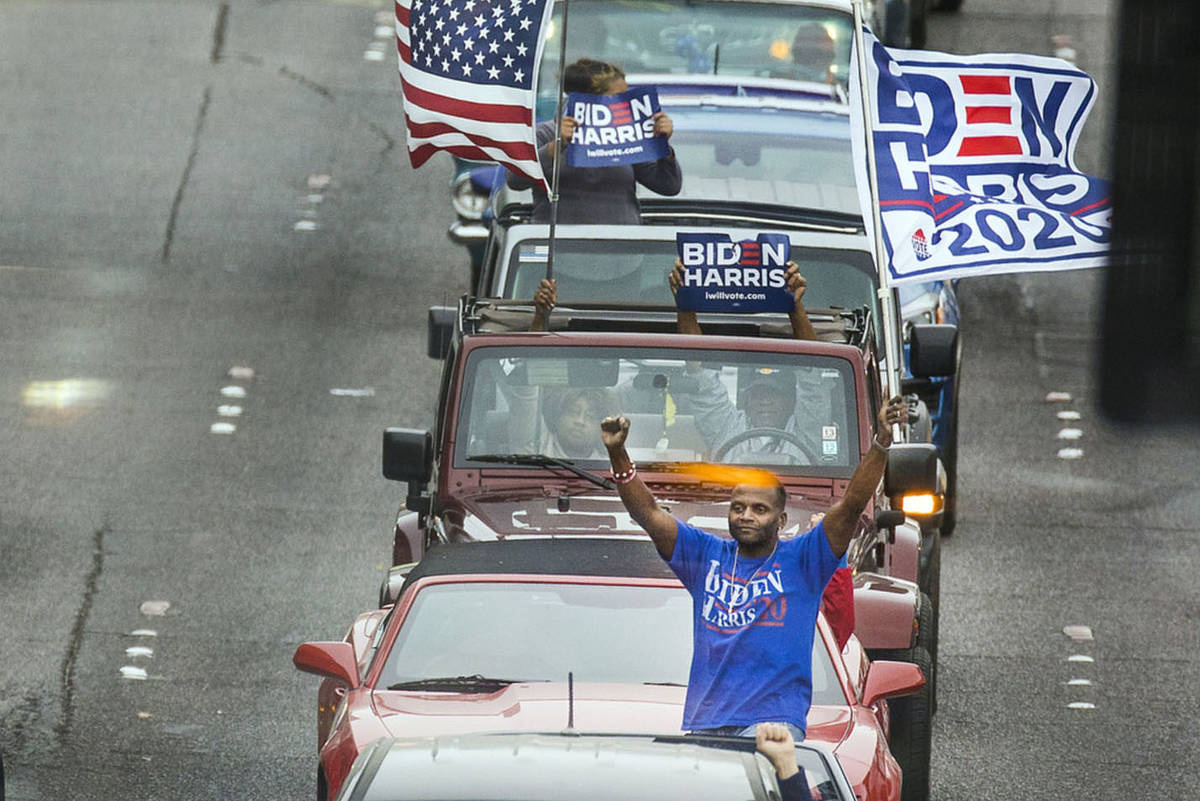 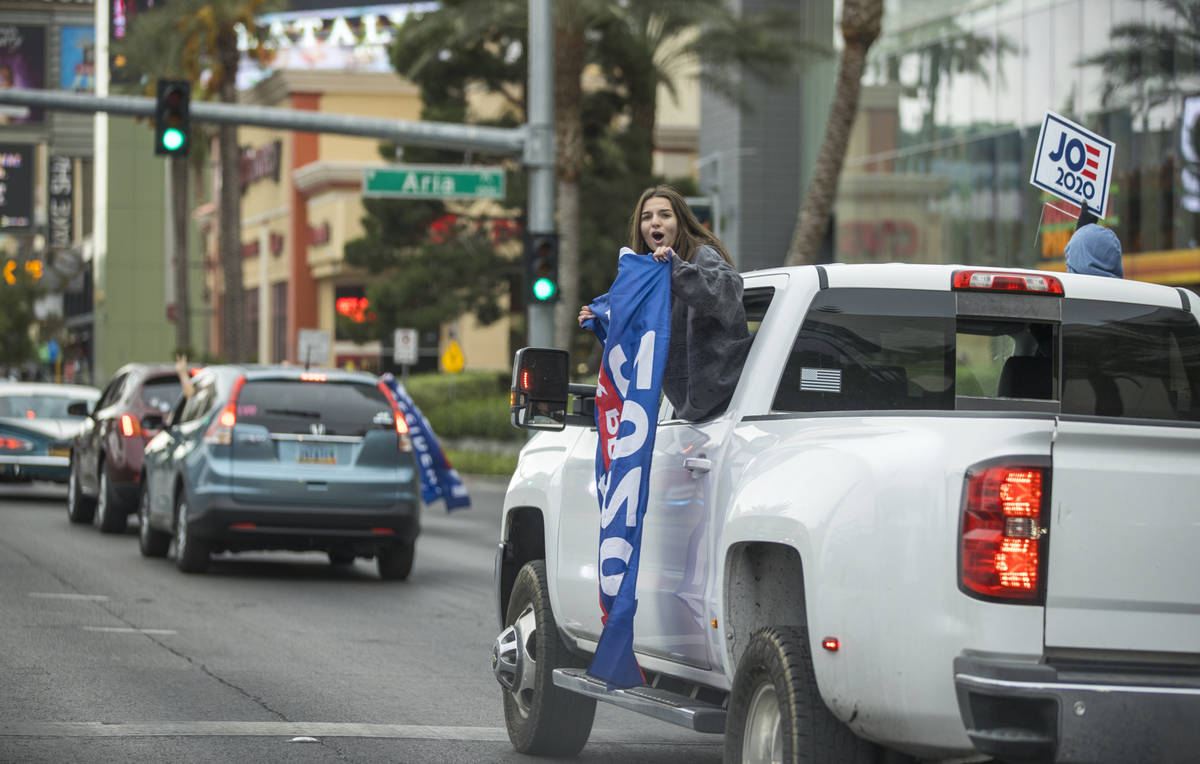 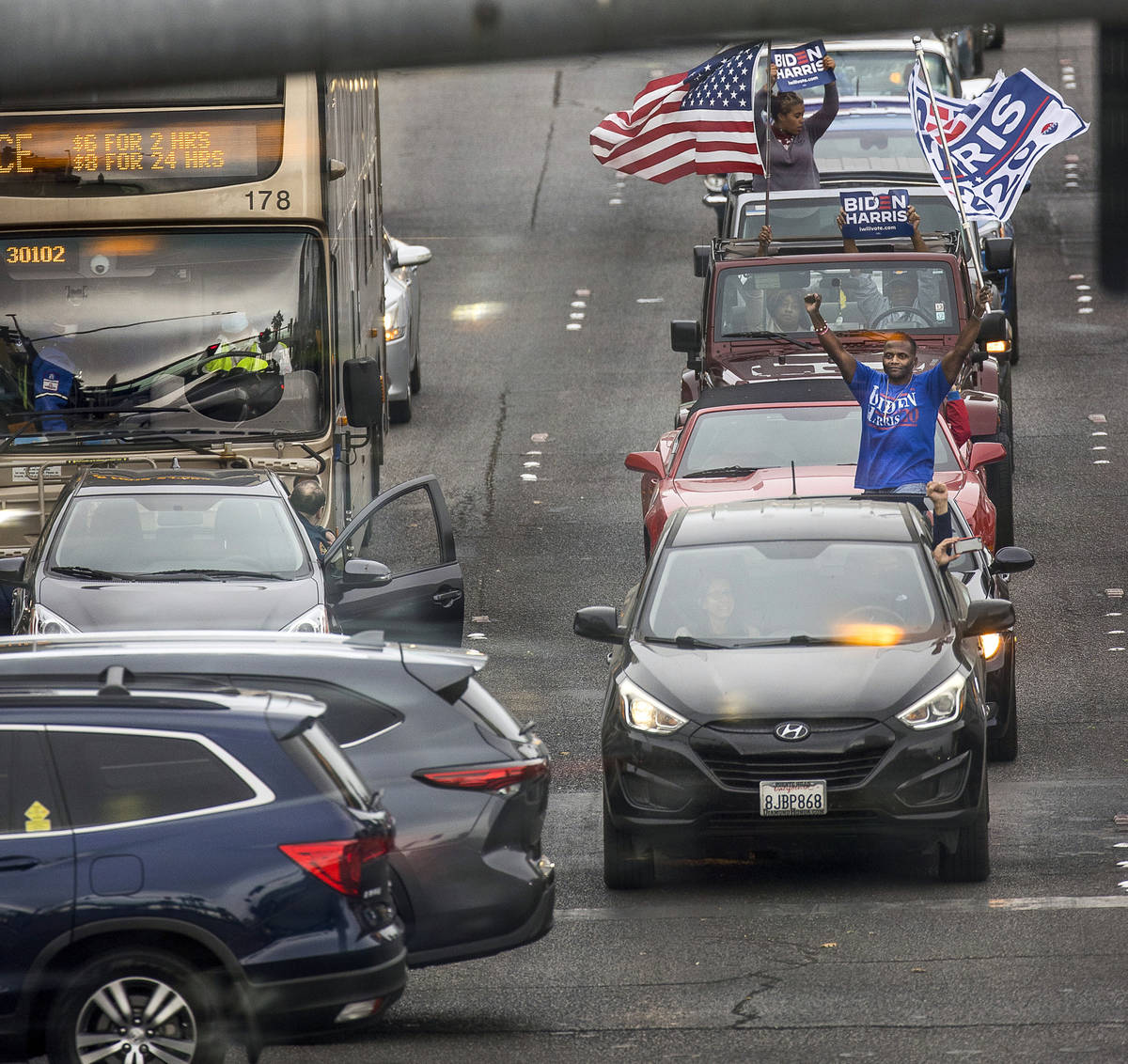 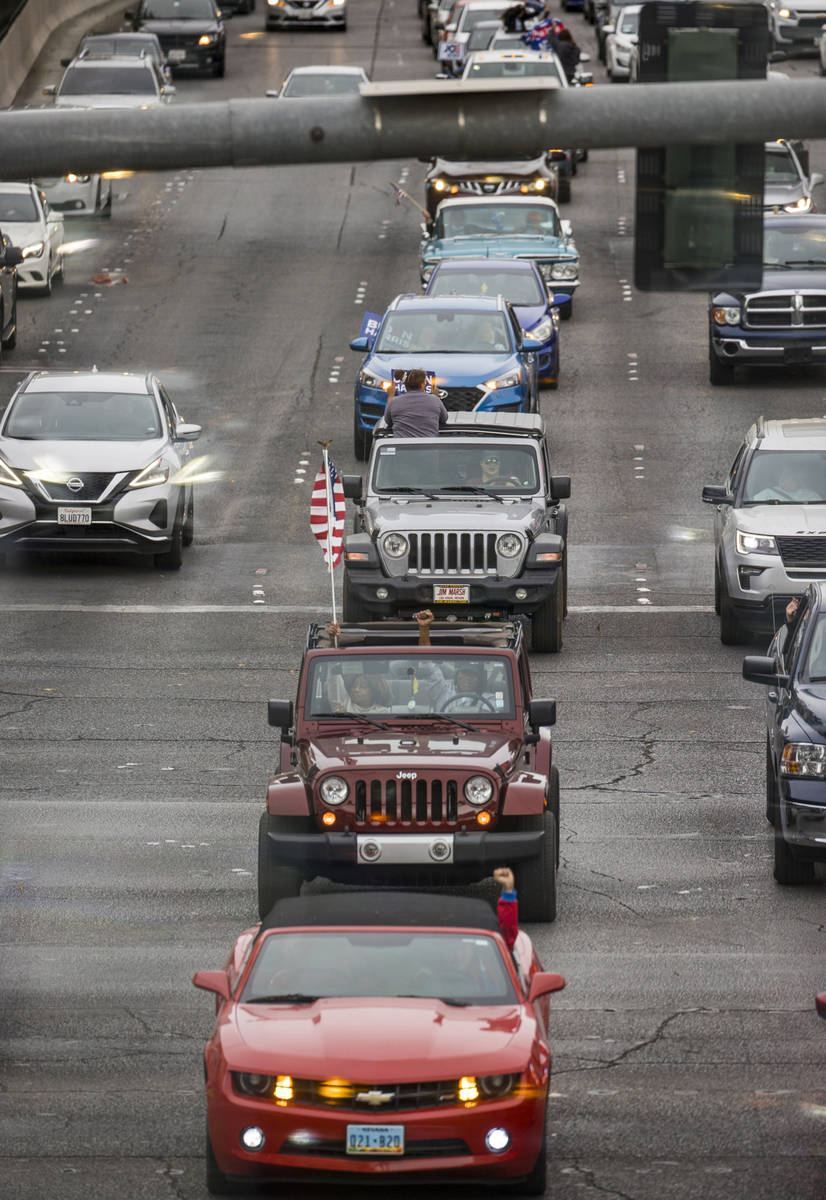 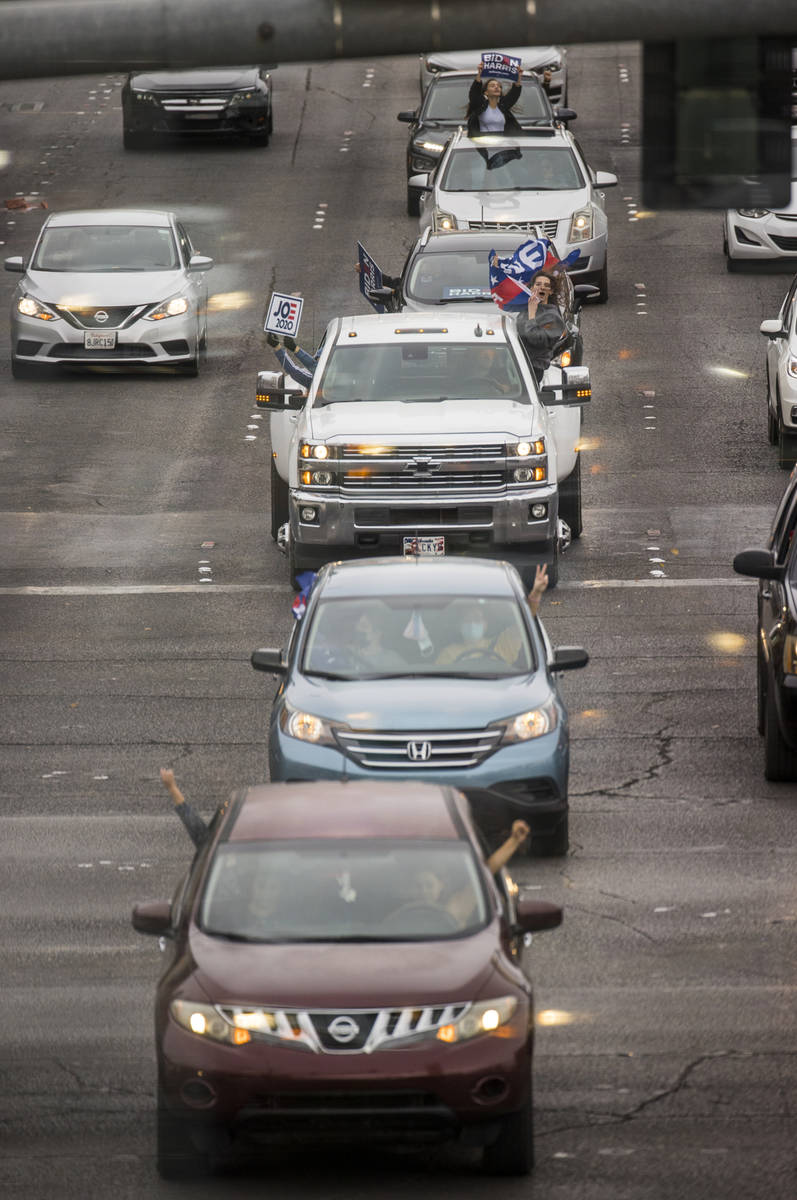 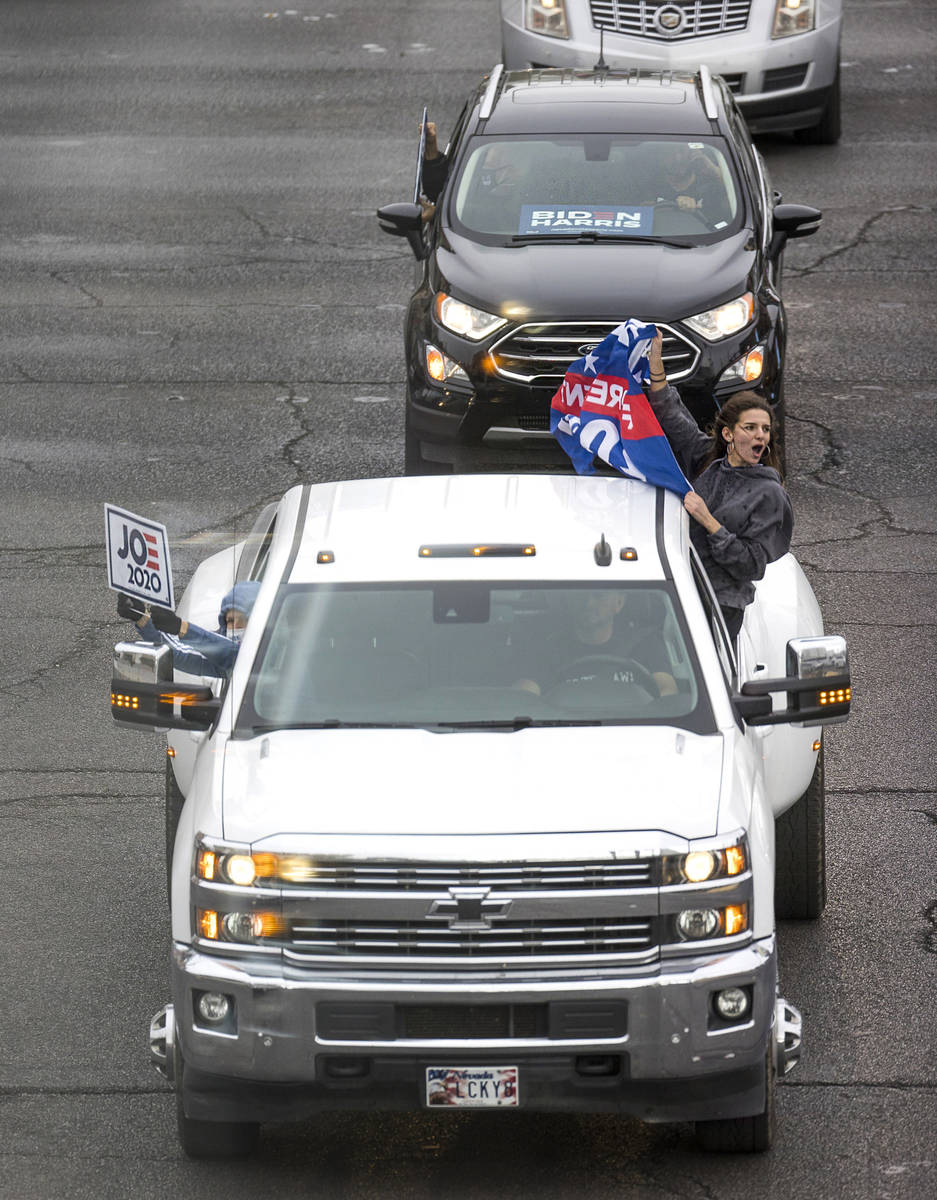 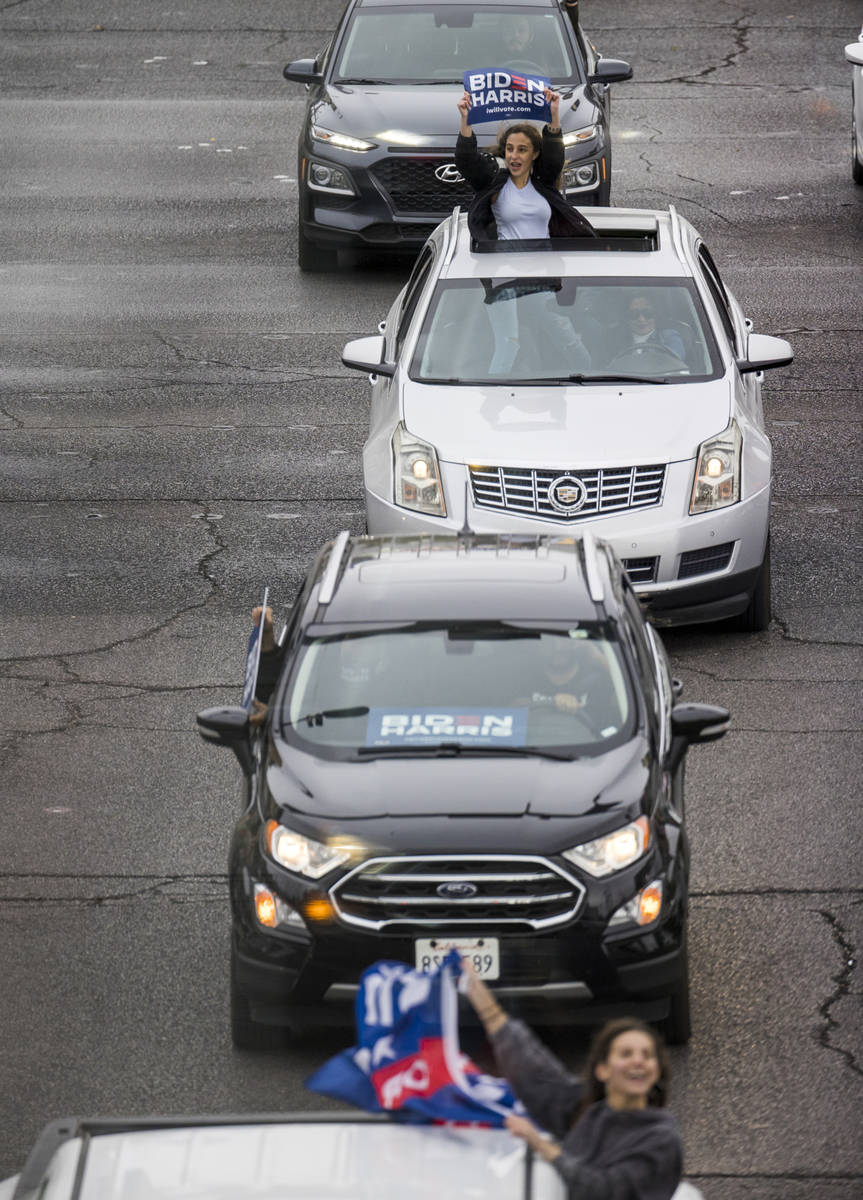 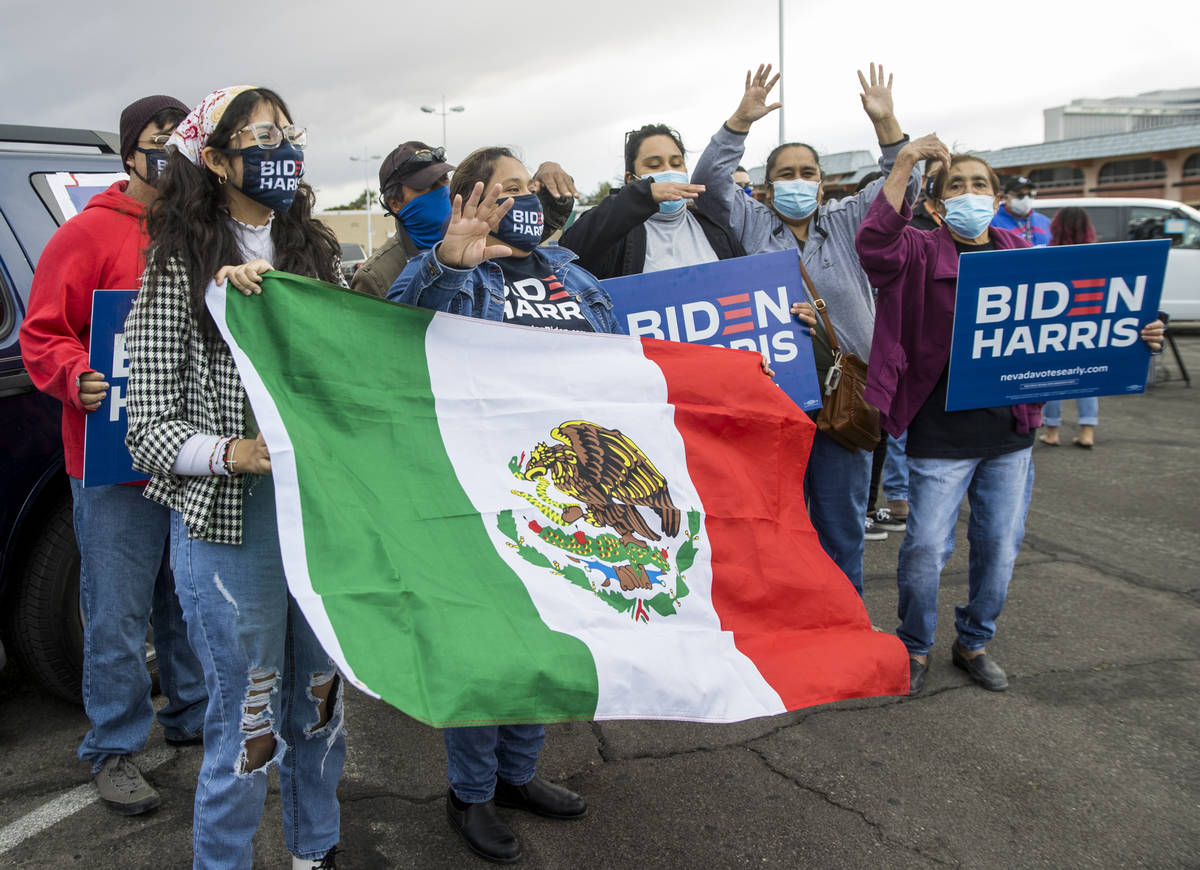 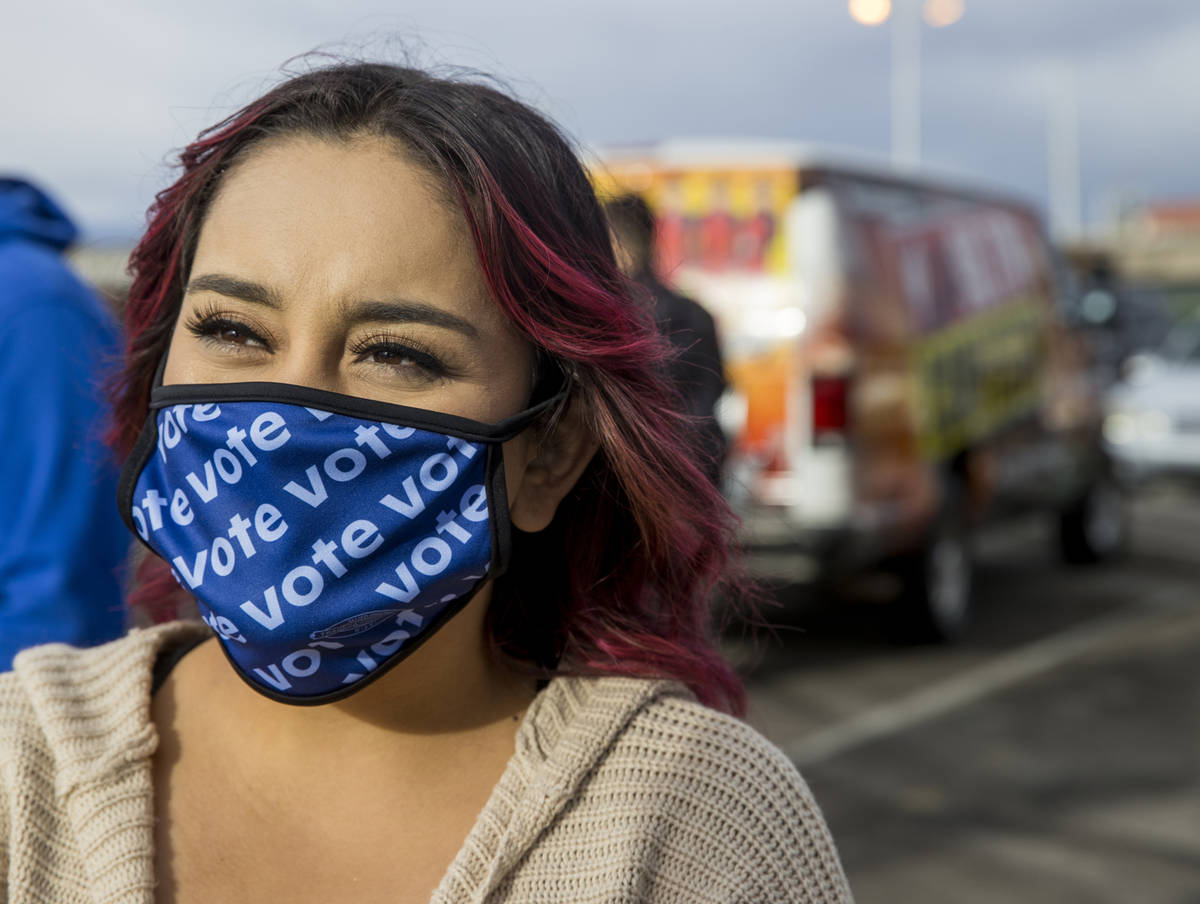 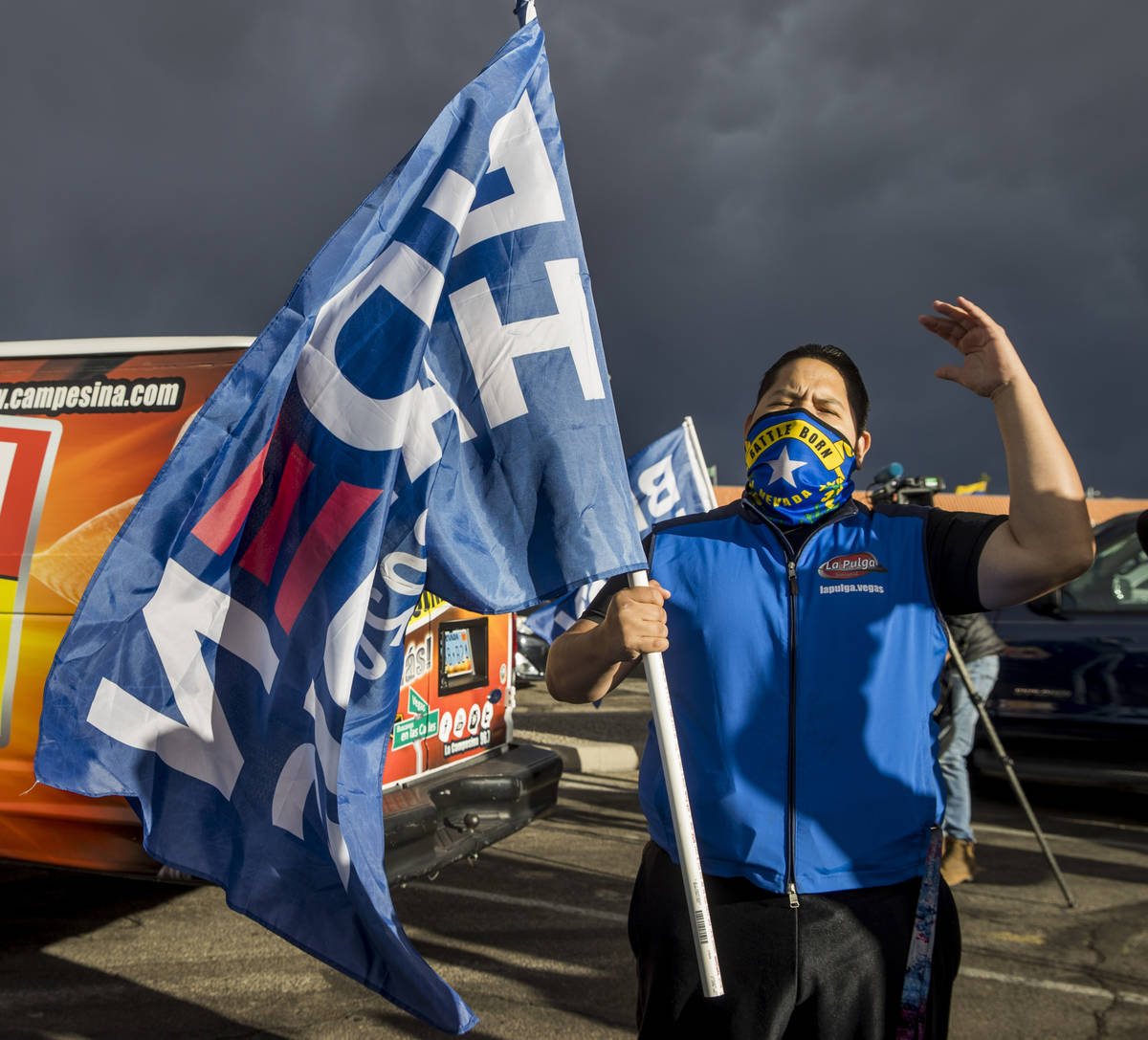 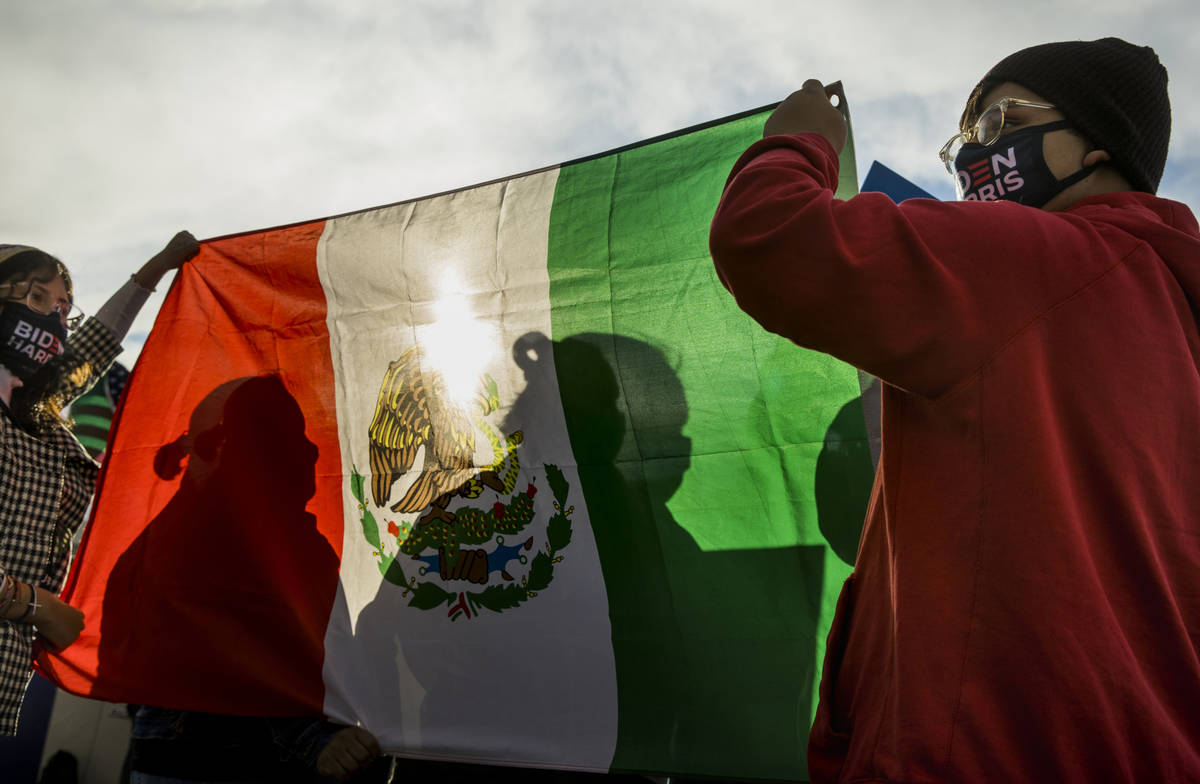 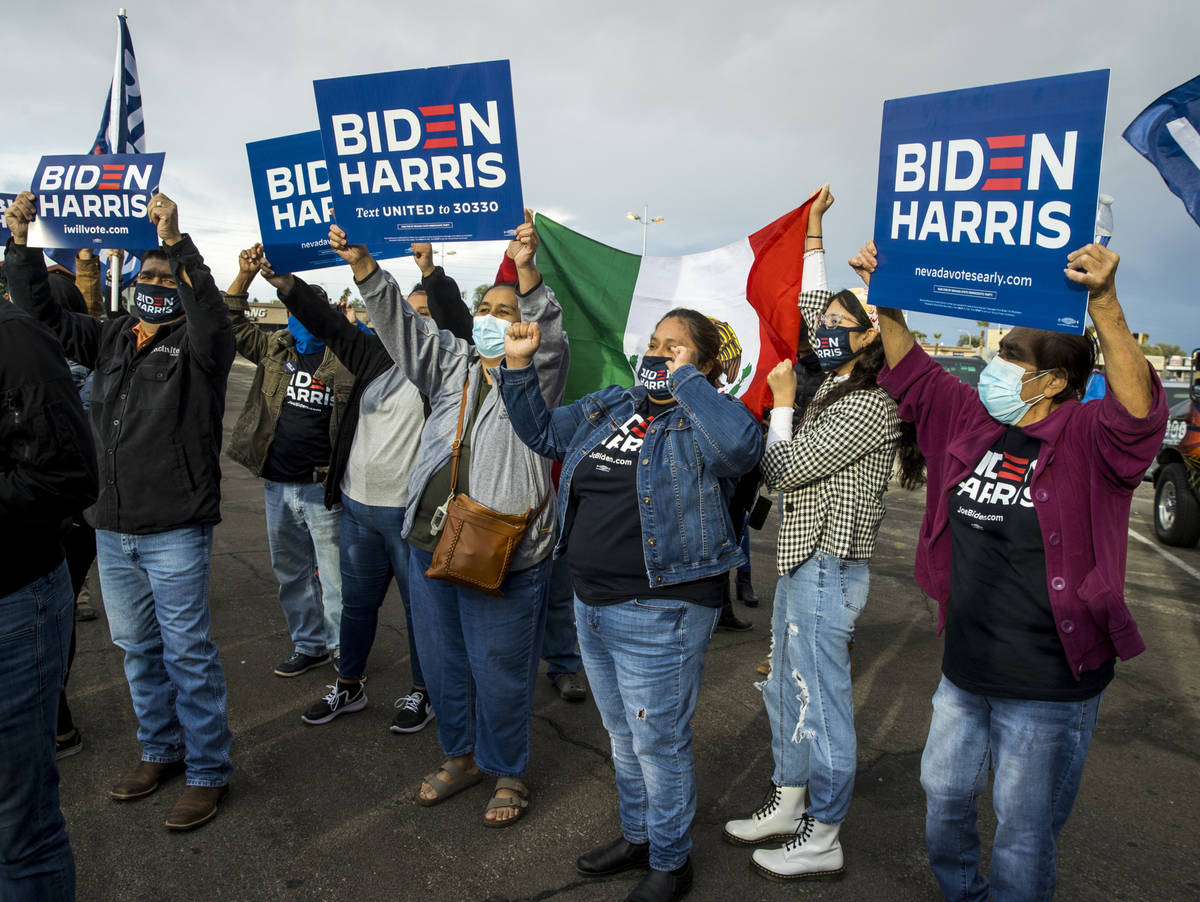 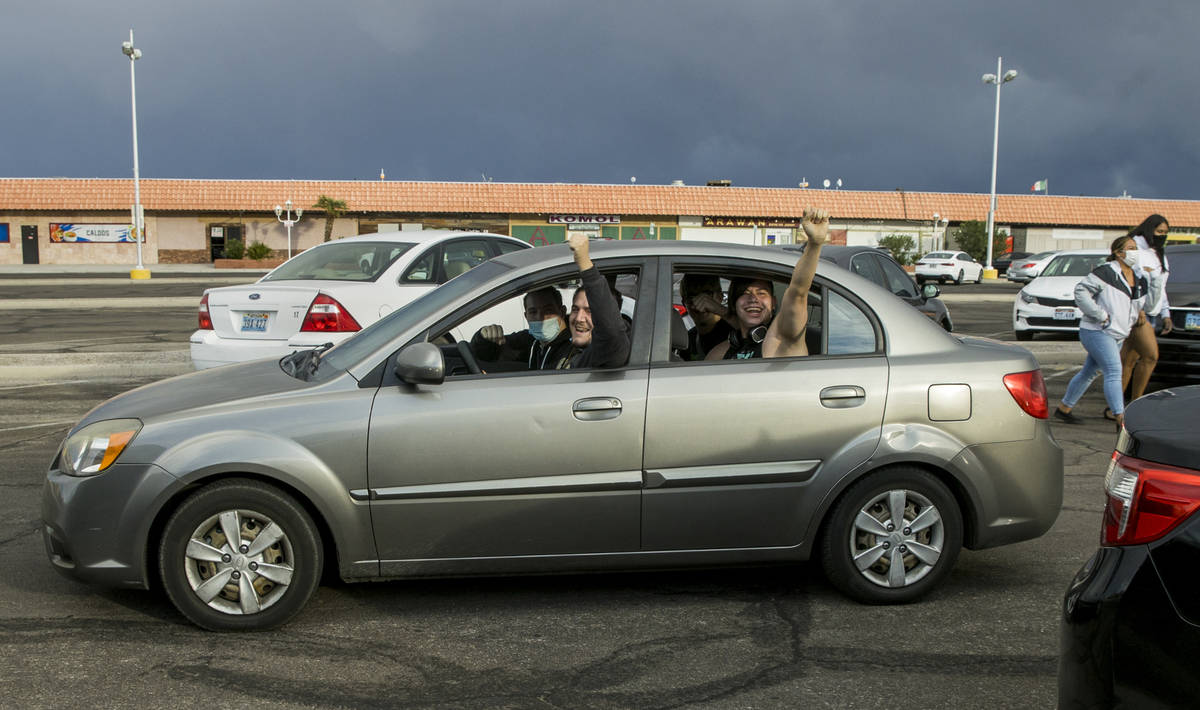 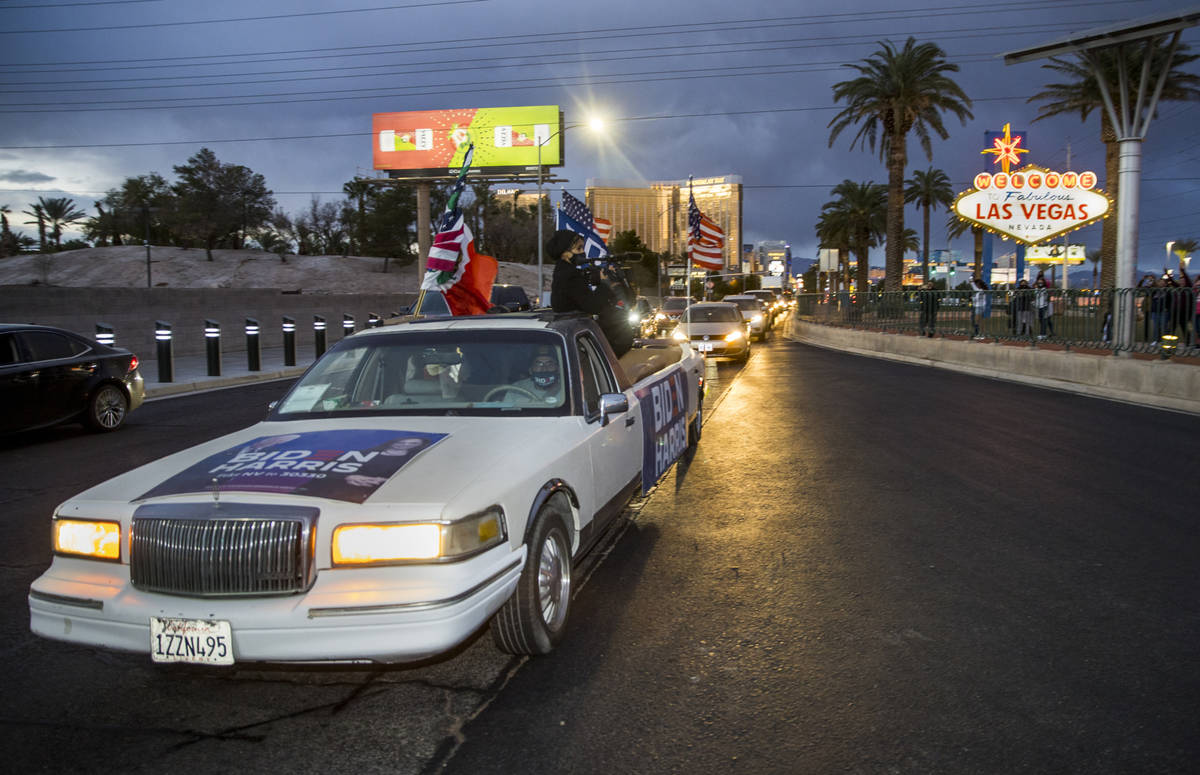 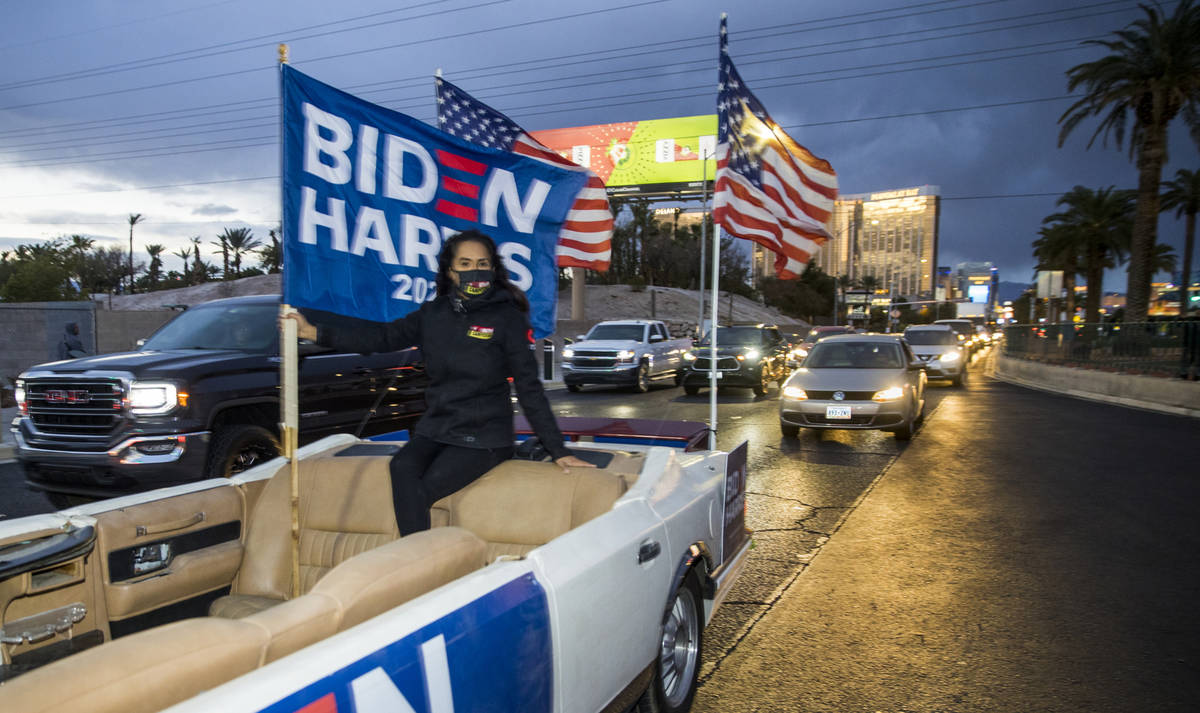 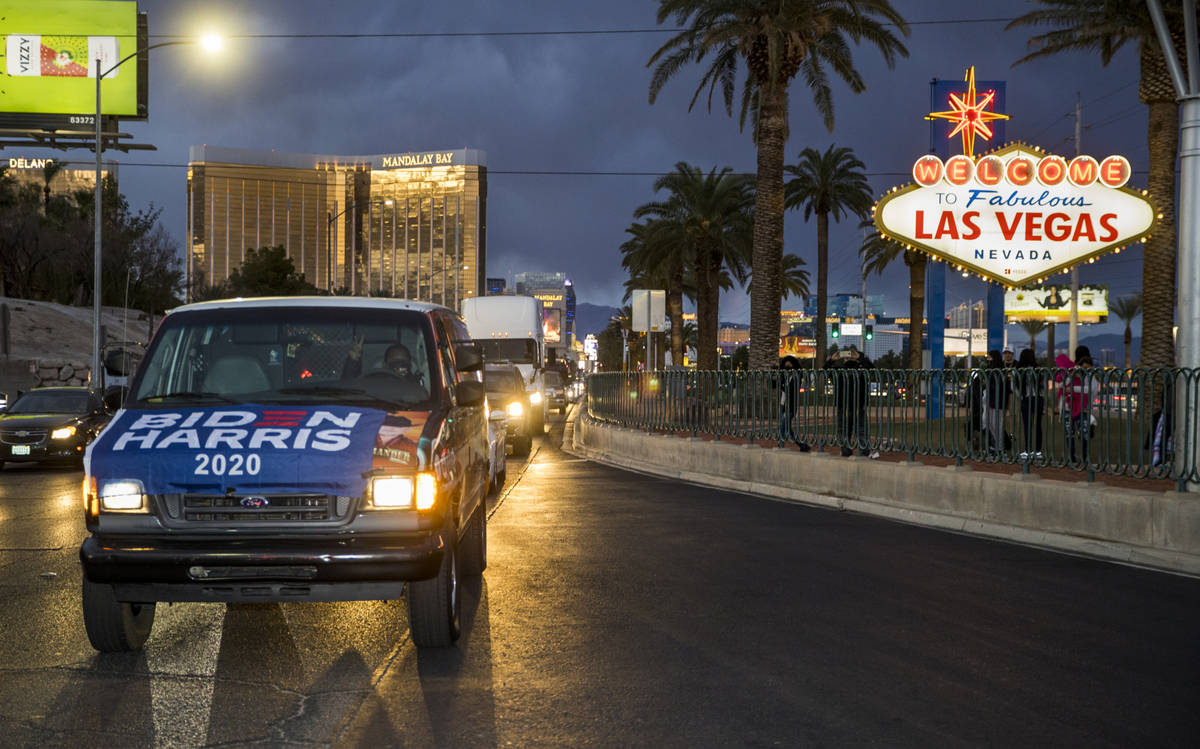 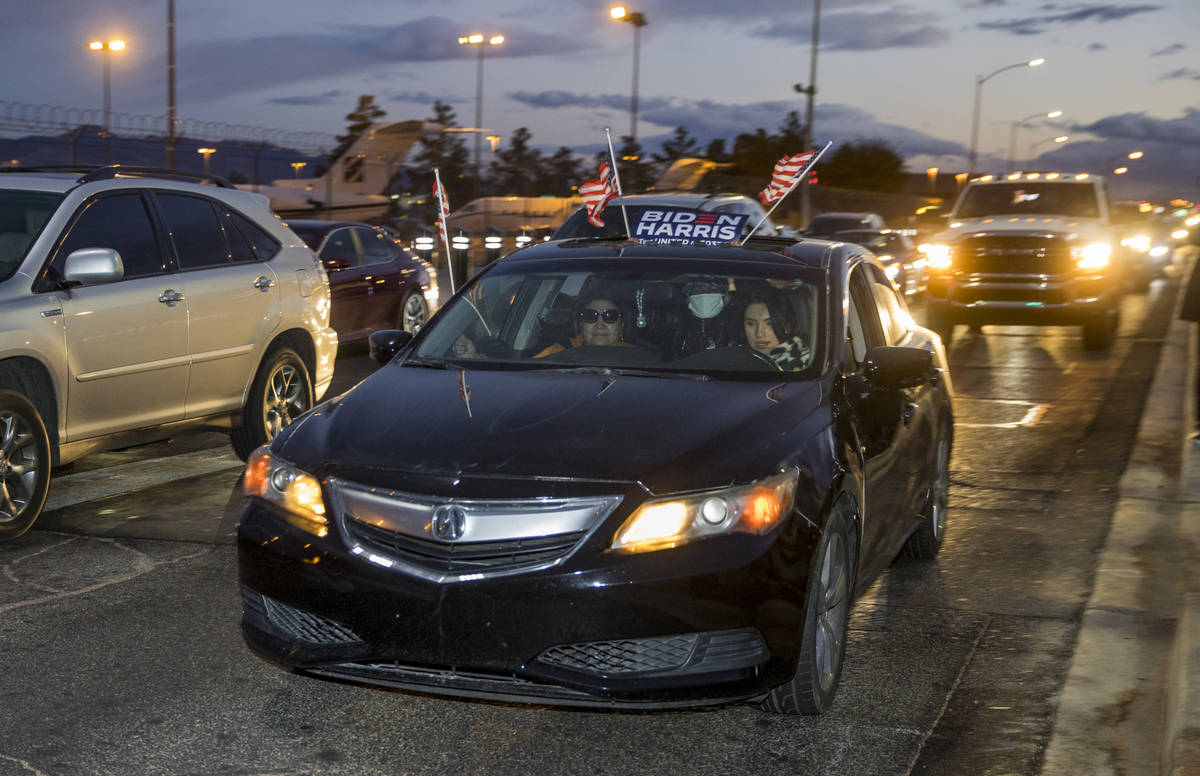 Muro Ramirez, 44, of northeast Las Vegas, said he voted for Biden because he wants a better life for his children, ages 10, 13 and 21.

“I’m looking for the best future for my kids,” he said, standing next to his 10-year-old son. “I want my kids to be able to go to college, and I want better jobs available.”

Ramirez owns a taco shop on East Bonanza Road and North Eastern Avenue but said that the pandemic hurt many local businesses and his usual customers couldn’t afford to come as frequently. “Some of the Latino community didn’t get the stimulus check,” he said.

Ricardo Mora, 15, took part in the event although he isn’t old enough to vote.

“I want to support my family and see what I can expect from the voting process,” Mora said.

The group of supporters gathered for just over an hour in a parking lot before taking off down the Las Vegas Strip and around the iconic “Welcome to Fabulous Las Vegas” sign in a procession of more than 50 cars.

“It’s amazing that we no longer have to feel that we’ll be judged just for the color of our skin, for being Latino,” La Pulga staff member Hernan Hernandez-Vela said. “We finally feel human again. We don’t feel criminalized just because we’re Latino because of what Trump said about us, that we’re criminals and all this. We finally feel we have a president that feels for us and cares about us.”

Maria Nieto Orta, 21, the state coordinator for Mi Familia Vota, said the event was held to celebrate the Biden-Harris victory and the role that getting Latinos out to vote played.

Wind and sub-50 temperatures didn’t keep families from singing and dancing before the car procession began.

Before it began, Flor Perec’s family broke into song amid other Latinos, singing, “Yo voy a votar,” and later, dozens of Latinos chanted together, “Latinos estan aquí; Sí se puede” before taking part in a 10-minute dance party.

Perec, who was attending with about 10 relatives, including her grandmother, parents and siblings, expressed hope for more unity in the country under the newly elected leadership of Biden and Harris.

“This country is so divided right now,” she said. “If I express my opinion, I’m afraid of other people’s response.”

Mi Familia Vota works with the community for voter education, mobilization and empowerment, and Orta said the organization has made progress, including a recent rally to encourage Latinas to vote that drew 80 women.

But there is more to be done, she said.

“I know the work continues and that we’re going to continue to hold anybody accountable regardless of political party,” she said. “We got this really big win, but how are we going to get our next win?”