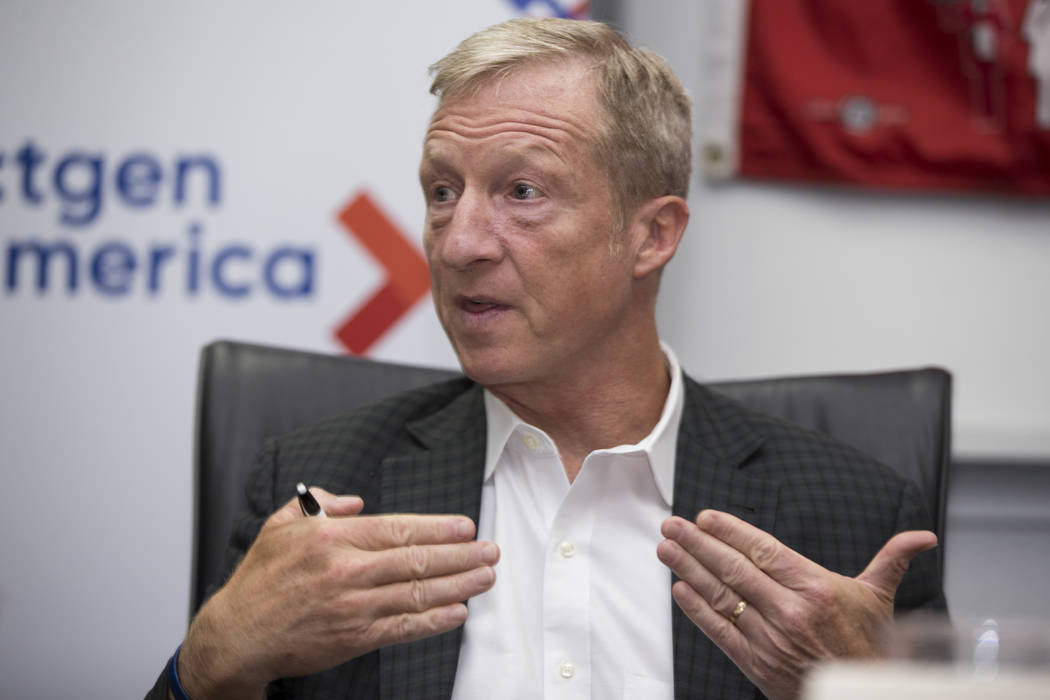 A California billionaire is pledging $2 million to register and turn out young voters across Nevada this fall.

Democratic mega-donor Tom Steyer’s super PAC NextGen America says it plans to focus on the competitive races for governor and Congressional Districts 3 and 4, but will be specifically focused on ousting Nevada’s incumbent Republican Sen. Dean Heller.

“Dean Heller has willfully neglected the people of Nevada by choosing NRA money over their safety, failing to protect immigrant families, and giving tax breaks to the rich at the expense of everyone else,” Steyer said in a statement. “Nevadans are sick of his greedy and destructive agenda, and young people are organizing to make sure they don’t have to suffer through another six years of his awful leadership.”

NextGen America has 58 paid staffers working in Nevada, and it says that it plans to reach over 250,000 young voters over the next seven months.

“Young Nevadans are pushing back against hate-mongering and bought and paid for politicians like Senator Heller and Adam Laxalt, working for a future that is not defined by bigotry or greed, but by prosperity and inclusion,” NextGen Nevada Nevada director Tyson Megown said in a statement. “Young people are rising up and organizing so that come this November, we can elect leaders who will work with and for us.”

Steyer has also launched a $20 million ad campaign aimed at impeaching President Donald Trump, and said this year he plans to infuse that effort with another $20 million.

Crazy Joe Biden is trying to act like a tough guy. Actually, he is weak, both mentally and physically, and yet he threatens me, for the second time, with physical assault. He doesn’t know me, but he would go down fast and hard, crying all the way. Don’t threaten people Joe!

The Republican National Committee latched onto Steyer’s pledge to Nevada, saying it shows that Democrats want to make Nevada more like its neighbor to the west.

“With a California mega-donor like Steyer throwing his weight behind Nevada Democrats, it’s clear that the Silver State Democrats are completely beholden to a total Californication agenda,” RNC spokeswoman Keelie Broom said.

Trump v. Biden: The odds are in

In the theoretical boxing match-up between the Twitter-feuding President Donald Trump and former Vice President Joe Biden, one oddsmaker gives the edge to the 71-year-old tweeting from the White House.

A wager on Biden is an even bet on the money line.

“Crazy Joe Biden is trying to act like a tough guy. Actually, he is weak, both mentally and physically, and yet he threatens me, for the second time, with physical assault. He doesn’t know me, but he would go down fast and hard, crying all the way. Don’t threaten people Joe!” Trump tweeted last week.

Trump’s tweet came after comments Biden made during a speech in Florida on Tuesday in which he said: “They asked me would I like to debate this gentleman, and I said no. I said, ‘If we were in high school, I’d take him behind the gym and beat the hell out of him.”

The Human Rights Campaign, which claims to be the country’s largest LGBTQ rights group, and the Nevada State Education Association both endorsed Democratic Assemblyman Nelson Araujo in his bid to unseat incumbent Nevada Secretary of State Barbara Cegavske.