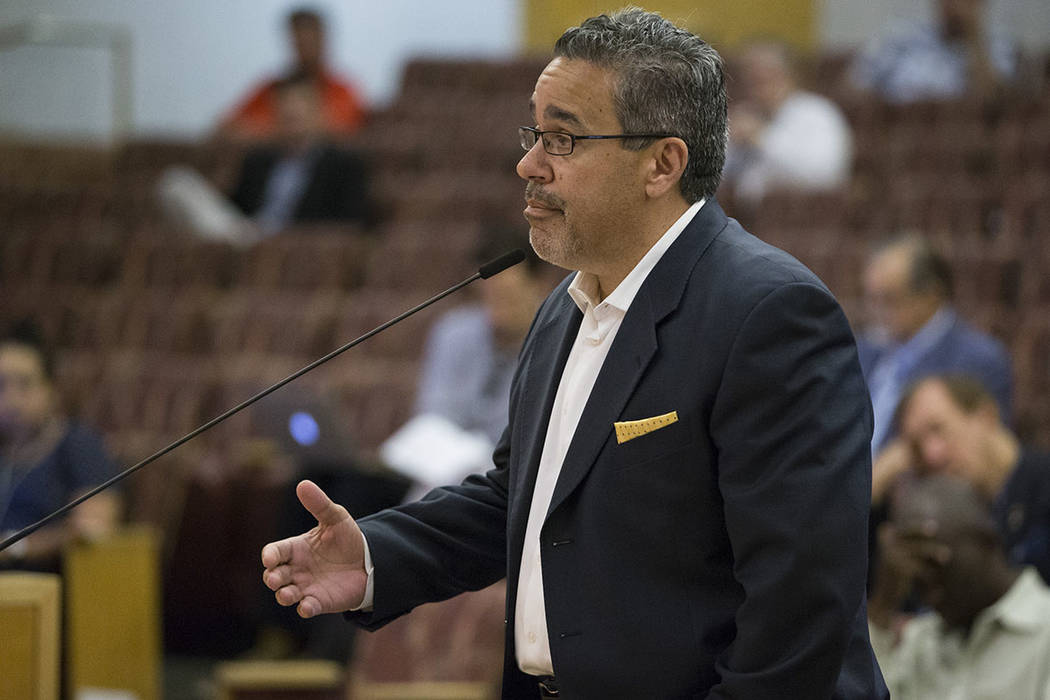 Peter Guzman, president of the Latin Chamber of Commerce, speaks during a meeting at the Clark County Government Center on Thursday, June 8, 2017 in Las Vegas. (Erik Verduzco/Las Vegas Review-Journal)

The Nevada Latin Chamber of Commerce came out against the Energy Choice Initiative, the ballot question that would restructure the state’s energy market so customers can pick their own electricity provider.

Peter Guzman, president of the business group that represents roughly 1,500 small businesses in Nevada, said the chamber is concerned “about the risks and uncertainties” of the initiative that would alter the state constitution.

“Question 3 would eliminate the consumer protections that help to keep a lid on Nevada’s electric rates,” Guzman said. “Higher electric rates would especially hurt consumers and Nevadans running small businesses. This directly conflicts with our commitment to promote our community’s commerce, health and culture.”

In the last two weeks, the state Public Utilities Commission and the backers of Question 3 have released conflicting reports about whether rates would increase or decrease if Question 3 passed.

The initiative is backed by corporations such as MGM Resorts, Las Vegas Sands and Switch. The Latin Chamber joined entities like NV Energy, AARP of Nevada and the Nevada State AFL-CIO in opposing the measure.

The deadlines to register to vote in the Nevada primary elections are quickly approaching.

Any mail-in or dropped-off registration packets must be received by the Clark County Elections Department by the close of business Tuesday.

The county is extending its hours from 8 a.m. to 9 p.m. that day at the election offices at 965 Trade Drive in North Las Vegas, and on the first floor of the County Government Center, 500 S. Grand Central Parkway.

Registration can be done at county clerk’s or registrar of voters’ offices until May 22.

Online registration at the Nevada secretary of state’s website, RegisterToVoteNV.gov, is open until May 24.

— The Clark County Education Association endorsed Reuben D’Silva in his bid for Nevada’s 1st Congressional District. D’Silva, a CCEA member and teacher at Rancho High School, is running in the Democratic primary against incumbent Dina Titus.

— Clark County Sheriff Joe Lombardo is the speaker for the Nevada Republican Men’s Club’s June luncheon at Bali Hai Golf Club. Advance cost is $35 for members and $40 for nonmembers. The day-of cost is $5 higher. For details, go to tinyurl.com/ydhh5nbd.

The Review-Journal is owned by the family of Las Vegas Sands Corp. President and CEO Sheldon Adelson.